'Sup, guys. I'm back with another suggestion for a potential unit.

[WEAPON]: Kreimhild (Lance, unique)
Might: 16. If unit is attacked by foe using sword, axe, lance, or dragonstone, unit receives Def/Res+4 during combat.
[SUPPORT]:
[ACTIVE]: Bonfire
Boosts damage dealt by 50% of unit's Def
[A]:
[B]: Coral Ring
Restores 10 HP at the start of each turn. (Skill cannot be inherited.)
[C]: Hone Cavalry
Grants adjacent cavalry allies Atk/Spd+6 through their next actions at the start of each turn.

Shamed, humiliated, and usurped by the Zofian hero and bastard Rigelian Prince, Albein Alm Rudolf II, Berkut sacrificed his betrothed, Rinea, in a fit of rage and grief to the Fell God Duma in exchange for dark power great enough to defeat his hated cousin Alm once and for all.
This power gives Barkut much more offensive prowess in exchange for some of his previous bulk. As of posting this, I'm still debating his stats. I'm cinsidering shaving a bit off his HP to increase his SPD, but given that he still retains SOME bulk, I feel like the SPD being a bit lower is a fairer balance.

Ability Reasoning:
Kreimhild
Berkut's lance after his pact with Duma. Canonically, it grants DEF/RES +5 as well as the Phantasm ability (basically Aegis). So to make it more fair and keep it in the confines of Heroes' abilities, I changed it to Close Defense 2. Potentially, it could maybe be forged to grant Distant Defense 2 as well. Maybe.

Bonfire
I chose this ability primarily as a nod to the Wildfire ability that Berkut has during his final showdown.

Coral Ring
Basically Arvis' Recovery Ring, made to fit with Berkut's appearances. I was having a hard time finding abilities unique to Berkut from his final battle, since he has...well...none that can be applied to Heroes beyond Kreimhild. So I looked back one battle, where he wields the Coral Ring, which grants a Recovery effect.

Hone Cavalry
When in doubt, team buff. I considered making Cavalier Pulse, but I decided that was a bad idea. 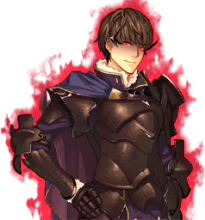 Asked by TheEternalShade3 years 6 months ago
Report
Sign in to Answer or Ask a Question!

I like this personally, yet I feel people will be salty with him not having DC.
Also I believe he had an heirloom ring which also added def and res in-game.

Might you be willing to complete a build over Nergal? I really like his character and he could have a built in crusader's ward effect on his tome, as well as be armored with wary fighter.

I know how people love their DC. However, I wanted to be sure to make him different from Camus/Zeke. So instead of a counter-hitter, I made Berkut into more of a bulky frontline bruiser. I like to try and give units I draft a different niche from other, similar units. I'm glad you like it, though. Knowing people like them makes drafting these units rewarding as well as fun. :3

Sure, I have no problem taking requests. I try to avoid releasing more than one a day, though (with the exception of Kana, since there are two versions, I released two simultaneously), so keep your eyes open tomorrow. Or check back here, I always make sure to leave a response on a request with a link to the unit.

I have a friend who's more familiar with Blazing Blade than I am looking over it now. I'll have it up by day's end, and I'll edit this comment so I can link it here.

I will trade 5 HP for 5 SPD, Def or Res and he will be perfect, without that he is quite ok unit I think.

With that atk stat he will probably become more popular as a brave lance user.