'Sup. I'm back again with another unit idea. Part of what inspired me to draft up this rendition of the character is my refusal to call him and his comrades by their aliases in Fates.

Inigo's Awakening appearance. A Mercenary-type unit, Inigo's skills are fairly decently balanced, with more of an emphasis on his SPD and ATK.

Ability Reasoning:
Silver Sword
Like I've done with most every Hero I've drafted, I kept Inigo wielding the weapon they're depicted wielding in their official artwork. In Inigo's case, this would be the Silver Sword.

Rally ATK/SPD
This is a reference to his personal ability in Fates, Fancy Footwork, than has the same effect. A Rally ability that increases Attack power and Speed.

Dancing Blade
A SPD-based variant of Heavy Blade, similar to their relationship in the main games. Normally, HB increases ATK while reducing SPD, where DB increases APD while reducing DEF. I considered having DB increase the cooldown on an enemy's active, but Guard essentially does the same thing, and it wouldn't really make sense. So, I stuck with the theme of them having similar abilities and had Dancing Blade decrease the CD on the wielder.

Breath of Life
Inigo's thing is how he tries to keep his comrade's morale up by trying to make them feel like everything will be okay. I needed a fourth ability and this seemed to fit his personality.

Asked by TheEternalShade3 years 10 months ago
Report
Sign in to Answer or Ask a Question! 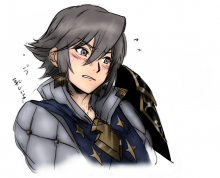 Didn't they announce Owain, Inigo and Severa in proper Awakening forms at some point, or was that just a rumor?

If they did, I haven't heard about it.

Can I suggest you make one for Shinon, Deadly Adept? I want to see that Double Bow with built-in Close Counter or the weapon he made in Radiant Dawn.

I'll have to look into the character, since I never played Radiant Dawn, but I can try. I admit, I'm an Awakening-generation player; though I am interested in the older games (and Echoes has been my favorite so far).

I'll add 'em to my list. I've got one or two more I'm been meaning to draft out for a while first. Panne and Tatiana.

Change in plans. As it's a request, I'm drafting Shinon now. Keep your eyes on the Q&A board, I should have it up by noon, local time.