'Sup, guys. I'm back again. Had to take a little break after drafting Reina because I was running a bit low on units that I wanted to draft. Because of that, I'm probably gonna space my suggestions out more than I have been.

I've been meaning to draft Emperor Rudolf of Rigel for a while now. Problem is that I always had a bit of difficulty balancing his abilities without making him too overly broken in ine way or another. So I decided to start from scratch, working with his two primary items, the Emperor Lance and Shield. From there, I tried to set up a functioning defensive kit that would fit with the nigh-invincible Emperor.

Ability Reasoning:
Emperor Lance
Rudolf's Lance. Even now, I'm still battling with the idea of what ability to give Rudolf's lance. His shield grants him +4 to DEF and RES, so I initially intended to have it function like Roy's Binding Sword and grant +2 when attacked. But there's one ability that the spear grants, called Lionine Poise. It's a damaging ability, which (in Echoes) costs a bit of HP to cast. So I instead decided to combine the Shield's boosts and this ability into one, which came out to basically be Fury. So, Fury 2. It grants the defensive buffs that Rudolf gets from his Shield, while offering the HP-draining offense granted by his spear's abilities.

Shove
An ability granted to Rudolf through both his Lance and his Shield. It's like it was begging to be used.

Emperor Shield
Rudolf's Shield.
As I stated before, the Emperor Shield grants Rudolf a boost to his DEF and RES. It also grants him use of the ability "Defensive," which reduces the amount of physical damage he takes in combat. Since this is essentially Pavise, I decided to up the ante just anlittle bit by having it affect all damage for a longer cooldown. Alternatively, I could give Rudolf Pavise instead of this ability and replace his empty B slot with Angel Ring, which would function identically to Arvis' Recover Ring.

Fortify Cavalry
Needed an ability that is a bit more toned-down than the others. Wanted DEF Tactics, but it doesn't exist in Heroes yet and my rule is to make only two new abilities per unit. As Rudolf is a defensive cavalier unit, a defensice cavalier ability seemed fitting. 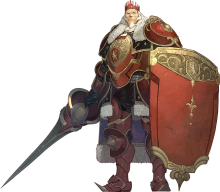 Asked by TheEternalShade3 years 7 months ago
Report
Sign in to Answer or Ask a Question!

You're not the only one who thinks Rudolf would make for a good GHB unit, though I suggested him as an armor unit and his lance to be inheritable. XD

Also thought Ashnard would make for a good unit with an ability to reverse the weapon triangle as both a nod to his insanity in his home game and the Reaver weapons from the GBA games.

The problem with making Rudolf an Armored unit is that he is, canonically, a Gold Knight-class cavalier, so he's more in-line with the Great Knight units like Frederick than he would be units like Sheena or Effie.

Show of your Summons - Special Heroes (Perilous Seas)
Hello Show me what you got on the new Banner - Special Heroes (Perilous Seas) Wish…
Oh, no
My dumb ass: “There’s nobody oj this pirate banner that really interests me.” IS: “Oh,…
Which unit would win A Hero Rises today?
As of now, who do you guys think has a high chance of winning AHR if it was released…
For fun Ares calculations
So, I made the “perfect” Ares build in the unit builder to get his bonuses and stats,…
Hello Fire Emblem Players :feh_reininherit:
Now hear me out before castrating me, my friends. I may appear cruel or judgemental…
Read More