'Sup, guys. I'm back with another suggestion for a potential unit, one that I am personally very fond of for reasons I'm unsure of. For my final suggestion for batch 2, I'm here with

[WEAPON]: Amatsu (Sword, unique)
Might: 16. ATK +3. Enables unit to counterattack regardless of distance to attacker.
[SUPPORT]:
[ACTIVE]: Galeforce
If this unit initiates an attack, it can take another action after combat. (Once per turn only.)
[A]: Quick Burn (EDIT: Duration lowered from 5 to 4)
During the first 4 turns, ATK/SPD +5.
[B]: Desperation
If unit initiates combat with HP ≤ 75%, follow-up attacks occur immediately after unit's attack.
[C]:

I don't know why I'm as fond of Say'ri as I am, I really don't. If I weren't so OCD about Grandmaster Robin and Grandmaster Morgan's STR/MAG and DEF/RES being balanced, she'd be my canon wife hands-down.
The Princess of the Valmese kingdom on Chon'sin, Say'ri takes up arms with the Sheperds against her brother Yen'fay and the tyrant Walhart. As a Swordmaster, Say'ri's natural RES makes her a born mage-hunter with an aggressive style of swordsmanship. I decided to make her more of an anti-mage unit not only because she's a Swordmaster and they naturally resist magic, but also as a reference to her hatred for the mage-Tactician of Valm, Excellus.

Ability Reasoning:
Amatsu
The unique weapon of Say'ri's brother, Yen'fay, passed on to his sister after his defeat at her hands atop the Demon's Ingle. In Awakening, can be thrown for an effective attack range of two. In Heroes, this translates to a Counter ability, though I would like to give it an effective ATTACK range of 1-2 instead of a counter range, but I want to keep it balanced. Given Say'ri's artwork, where she's dual-wielding Killing Edges, I wanted to give her a sword with a Brash Assault effect or a Reaver weapon that reverses the weapon triangle, but I felt the Amatsu is more fitting. I will save those ideas for later.

Galeforce
An ability that Say'ri learns as a Dark Flier. It compliments her status as an offensive mage-killer.

Quick Burn
She learns this as a Wyvern Lord. At first glance, this may seem a bit overpowered. Life and Death offense without the DEF/RES penalty. Quick Burn's penalty, however, it that it is a temporary effect. Where LD lasts forever and you always have the buff with the debuff, with Quick Burn the buff wears off and your stats no longer receive the increase. The only part I'm unsure of is the duration. Maybe I should lower it to 3 turns, but that just feels too short,

Desperation
I felt like my options were Desperation, Vantage, or Wrath. Vantage doesn't fit her offensive role, and Wrath would be too overpowered with Quick Burn, 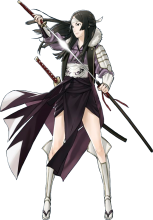 Asked by TheEternalShade3 years 4 months ago
Report
Sign in to Answer or Ask a Question!

Ashnard Is not the only with title of mad King from FE series? From path of radiance.

Apparently not, as Gangrel also possesses the title of "Mad King."

Of course units are going to get more powerful. Otherwise:
1.) Game gets harder, units stay the same. Game gets too hard, people quit.
2.) Game stays just as difficult with no change whatsoever. People get bored, quit.

If there's no change in the quality and ability of the people we can use, there's no fun to collecting and building them all. Fortunately, with Heroes, most abilities are able to be passed on to anybody you want, so most anybody can be made into a powerhouse.

If they give her a weapon with built-in DC that also grants atk+3, they’d have to buff every other unit that has a DC weapon, for obvious reasons. The turn count for Quick Burn is also a bit OP, 3 turns is more than enough. Think about it, that skill would turn her into an offensive powerhouse, so does she really need 5 whole turns to do her job? I don’t think she does, especially if you keep Galeforce on.

They wouldn't necessarily have to buff every DC weapon. Primarily because, with Say'ri's naturally low ATK, she still comes in with less ATK than either Ragnell-wielding variation of Ike, for example. As far as DC swords go, even with Amatsu's ATK+3, she'd still be tied with Ryoma for power, assuming both have neutral IVs.

The thing about three turns on Quick Burn is that, on most maps, you waste one turn setting your units up to engage. Unless you use a Dancer to launch your unit into the middle of their entire team alone. At three turns, this means that the map setup alone only gives you a two-thirds of the duration for Quick Burn. At two turns for the effect, you may just be better of using L&D or Swift Sparrow. That's why I was hesitant to set it as low as three. Four, however, might provide a more reasonable duration, allowing for three turns to utilize its effect after the setup.

(And Galeforce isn't so much of an issue on Say'ri as it seems, since unlike Ayra, she does not have a CD-boosting effect native to her kit. She could always be given Wrath, though. But if we count for Inheritance, then any combination can be called broken. That's how I see it, anyways.)

4 turns is reasonable enough. If she’s even close to your build when she comes out, I hope that Quick Burn would work like Renewal in TTs and Chain Challenges (goes into action on turn 1 on each map). Is that how it’s supposed to work on your build? That would make her really useful.

Yeah, I intended Quick Burn to go into play immediately when the battle starts, not the next turn.

solid unit!! galeforce might be a Bit much for her but otherwise i like it :)
it would be an interesting chapter in the story to have her be in with some other fea units, yen’fay (yen’fey?) could be a grand hero battle award!