'Sup. I'm back again with another unit idea. I wanted to give a shot at drafting an entirely new class of unit, paving the way for me to eventually woek on one of my favorite females.

When I played through Echoes, while Faye may have been my primary healer, I found myself pafticularly attracted to Tatiana as a character. I'm not exactly certain why, myself, but I feel like she could bring some ideas to the table for Heroes as she comes after her gallant Sable Knight. If these ideas are liked, maybe I can refine her and draft some ideas for Silque.
As a Saint, she has decent HP and magical soak, but lacks virtually any sort of offensive presence on the battlefield, relegating her to a hard support role.

Ability Reasoning:
Absorb
The baseline offensive ability for Saints and Clerics in Echoes is Nosferatu, which heals the user based on damage inflicted. Later on, they also learn Seraphim to damage Terrors, but Terrors do not exist in Heroes. Besides, as a hard-support based healer, Tatiana has no real reason to possess powerful magicks like that in a game like Heroes.

Fortify
A skill unique to Tatiana in Echoes that normally heals everybody within casting range of her. Because of that kind of power, I nerfed her legendary Skill to instead heal an area around a chosen target instead while boosting its range to one more than Physic. She also cannot heal herself with this ability, so targeting a unit adjacent to her will heal only the target and any other adjacent enemies.

Absolve
One of the class abilities learned by Saints. Normally, it negates damage taken from terrain tiles such as Fen. However, terrain damage doesn't exist in Echoes that I have seen. Instead, I had it negate burn damage inflicted out-of-combat by abilities such as Poison Strike and Savage Blow. Or Goetia, in my Aversa suggestion. This ability only affects the user and cannot be learned by non-staff users.

Spur DEF/RES
As Tatiana is a caring young woman, it made sense to give her an area support ability that protected her comrades instead of aiding in their ability to kill. 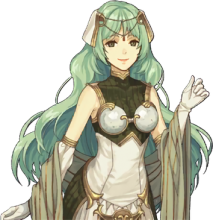 Asked by TheEternalShade3 years 8 months ago
Report
Sign in to Answer or Ask a Question!

We need Fernand as a Grand Hero battle.

Aren't we done for Echoes content for a while? Like give a chance to Thracia 776, Genealogy of the Holy War, or Radiant Dawn at least

We went over this, man. I never played those games, I don't know the first thing about them. Even drafting that Shinin you asked for took significantly more work than all the others.

I agree with you about Tatiana and Kaze, but all the others that you have done are some of (in my opinion)
the worst Fire Emblem characters. I hate most of the characters in Awakening. We need characters like Lex and Sigurd

Not to be rude, but the units I draft up aren't based on characters that you, specifically, like. I come up with them either because I like them or I feel they can bring something to the table. I draft who I know, or who I'm requested to as in the case of Shinon, and I'm only familiar with the games from Awakening onward. Any knowledge I have of characters before that comes from discussions with a more knowledgeable friend of mine or I happened to read up on them.

The characters in Awakening are very bland/gimmicky compared to the earlier games.

If that's how you see it, then so be it. You're entitled to your own opinion. Doesn't stop me from enjoying the game or liking the characters, though, and I'll still continue to draft who I know unless somebody requests someone I don't. And from what I have seen, I'm far from the only one who does - among both rookies and veterans both.

Maybe she could be the first healer to come without a weapon, but have fortify as a legendary assist skill.
Rng 1: Heal all adjacent allies for x hp
Just a suggestion, but I think fortify could be a cool skill, even if not particularly usefull.

I did consider adding Fortify as something to the effect of an AoE heal around the target; but I ultimately decided that with her Soothing Light ability it may be a bit much on one person. Besides, I try to limit each character I draft to a maximum of two unofficial abilities.

Hmm...Then again, I could pass Soothing Light off to Silque and give Tatiana Fortify instead. That may actually work, now that I think about it.