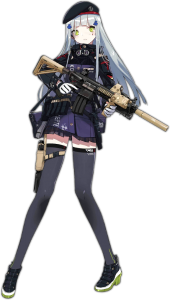 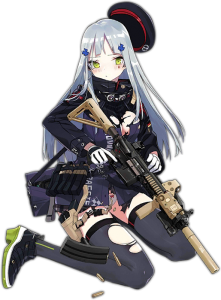 416’s line isn’t far from the truth. Being the sole 5 star AP grenadier, before SOPMOD II gets her neural upgrade, means that she has the highest damage grenade for an Armor Piercing grenadier. That’s especially true when she is equipped with her SPEQ (a cross between a VFL and an EOT without the ROF penalty). Thus, she is best used against large hordes of tightly packed enemies, where grenadiers shine, or packed, beefy enemies.

Unfortunately, she has to compete with M4 SOPMOD II, a career reward Grenadier that is cheaper to raise, is awarded half levelled, and can equip EOT + VFL / PEQ + VFL, which gives her an edge over 416 in most day and night scenarios. And while 416 equipped with her SPEQ cements her position as the highest damage grenadier, she still struggles to keep up with dedicated self-buffer ARs like G41 (the AR standard) because of an issue faced by all AR grenadiers: 8s initial cooldown and a lack of dedicated buff that makes them lag behind in short fights, boss fights, and fights against sparse packs of enemies. Essentially 416 is hard to justify raising before Commanders are in a position to Mod her.

416 Mod comes to show she will still be all you need, even when AR Team mods exist. Her improved initial cooldown and unparalleled grenade strength with its secondary explosion make her incredibly potent in a variety of scenarios. At Mod III she has strong base stats that, coupled with both SPEQs, makes her DPS comparable with sustained ARs. Her Skill either cements her position as top Grenadier when she manages to activate her secondary grenade, or gives a burst damage amp that the whole team, and even HOCs, can take advantage of.

In essence 416 Mod becomes a great hybrid unit that excels as a grenadier and works well as a sustained DPS AR. Commanders absolutely should raise her, at the very least to Mod II.

With the release of the AR chips, investing in acquiring her SPEQ, and enhancing it, becomes a matter of how much 416 Mod will be used. Trading 25+ ROF, 15+ FP and -50% critical damage for +10% critical damage and 25+ FP (post buff rework) certainly cements 416 Mod as the top AR in Ranking and Horde killing. However, that comes bundled with the cost of getting a 6 star unit to Mod III, and an equipment with thrice the cost to level.
Her SPEQ is a big help in Ranking, and other situations that demand as much DPS as possible, but if Commanders lack the FCCs to Mod III 416, or won’t field her in high stakes situations, her SPEQ may either be left at +0 or be skipped entirely by leaving her at Mod II.

Being a grenadier allows 416 to fight Scouts with minimal effort present especially in early night missions, and Strelets, who are introduced past chapter 10, which are enemies with high evasion that are otherwise hard to hit.

At 76 ROF and 51 FP, 416 has reasonably balanced stats, with the exception of below average Accuracy for an AR, at 46. AR-15, SOPMOD II and M4 all have similar stats premod.

Having a 5 star multiplier of 15x, combined with her SPEQ’s FP buff means that 416 has the highest grenade damage in the game. Against beefier enemies, like Guards, or ELIDs, it may be the difference between one-shotting them when SOPMOD II, with her 12x multiplier, would not.

416 and SOPMOD II have similar base stats, and early content doesn’t have many enemies with high HP where 416’s higher multiplier matters, she ends up competing with M4 SOPMOD II. Because newer Commanders have a limited supply and source of EXP and Cores, 416’s rarity ends up weighing against her, by costing more than twice (105 cores)  as many cores as SOPMOD II (45 cores) does to raise to 90x5.

SOPMOD II can also equip two scopes, unlike 416, which means she can equip EOT+VFL or PEQ+VFL, putting her DPS further ahead of 416 in day and, especially, in night battles.

Having an initial 8s cooldown means that in short fights, 416 may not use her Skill at all. As fights in early chapters rarely last more than 10 seconds, 416’s DPS falls behind hard compared to units like AR-15, M4 and FNC.

Being a grenadier means that 416 falls behind self-buffers in a number of situations: against sparse packs of enemies, low HP enemies, such as Dinergates, and against bosses. She is best fielded against large hordes of beefy enemies, or tightly packed enemies. Because beefy enemies or tightly packed enemies are only seen post chapter 8, 416 will struggle to be relevant before that.

Her SPEQ is farmable in Singularity from E2-4 Promotion IV, which either requires 3-4 star fairies for a cheaper farm, or an expensive farm team (like 3 AR with max SPEQ M16 or 3AR1SG) for a consistent farm. That means newer and even mid-game Commanders may have a hard time getting theSPEQ for an unit that is already hard to justify raising.

She is all you need in Strong Stats

She is all you need in Burst Damage

Her first burst is at the 6s mark when she fires her grenade. That allows her to kill otherwise dangerous backline enemies, such as Gunners or damage/significantly weaken High HP frontline enemies such as Guards or the Punishers (Mirror Stage). This is dependent upon grenade target however.

Her second burst comes in the form of a damage amp of 20% that her Skill offers when the target of her grenade isn’t killed. It can be taken advantage of by other team members, and even HOCs, meaning that she provides a meaningful damage boost for the entire team during the 3 seconds it's active. Essentially, 416 goes from a bad choice against bosses to a decent option.

416 Mod is the best DPS for corpse dragging 12-4E for a number of reasons: first and most importantly she has a cooldown of 6s, which means that she can one-shot some nodes before the enemies have a chance to shoot. Secondly, her secondary grenade, which is procced if she kill her main target, thins out the enemies left alive by grenade targeting RNG, which means less enemies to wipe out, and less enemies to shoot at the SG tank.

She is all you need in Grenadier AR class

416 Mod’s has numerous increments: great base stats, an SPEQ with crit damage buff (and FP buff post rework), a 6 star 16x grenade, and an initial cooldown reduction to 6s when she is modded. That means she manages to handle the ballooning HP in later content better by having a strong FP and grenade multiplier, while other Grenadiers struggle to keep up.

She also enables RF+Grenadier teams, and does well against groups of beefy enemies paired with dangerous enemies, like Gladiators + Gunners seen in Shattered Connextion Ranking, where she kills enemies (Gunners in this case) that would otherwise give trouble to a standard RF team.

Her Singularity SPEQ is all you need

Her SPEQ provides 25% crit rate, 8 FP and 14 Accuracy at max. It not only fixes her below average Accuracy, but also makes her grenade even more potent. It actually competes with a maxed VFL, thanks to the FP buff, even though it has a lower crit rate buff.

In practice, 416 has similar DPS with either scopes. The advantage of her SPEQ, however, becomes evident when she shoots her grenade, which may be the difference between one-shotting beefy enemies or not.

She is all you need in expensive equipments

Having 2 SPEQs, Tactical Hairband and EOT XPS3 (also known as Hybrid Sights) means that maxing her equipment is significantly more expensive, compared to standard equipment. Commanders should focus on levelling her EOT SPEQ first, as it has a more significant contribution to her DPS than her Hairband does.

She isn’t all you need among us 6 star units

Being a 6 star unit means that she is prohibitively expensive to raise to Mod III, especially because of how limited FCCs supplies are. Commanders are advised to level her to Mod II first, and only Mod III her when they have FCCs to spare.

Because 416 only buffs the doll directly in front of her, she is best positioned at Pos7. With a fat 40% Damage buff tile, offtanks like Vector and Skorpion and direct fire SMG offtanks, like Shrimp, JS 9 and X95 can take advantage of it.

However, because offensive SMGs fall off later on and direct fire SMGs are niche, 416 tiles can be neglected in favour of a second maintank as needed.

Despite now being able to buff Position 5 when she is on Position 1, buffing only FP means that the maintank rarely, if ever, uses it. Thus, the same standards for her premod version apply.

RF+Grenadier setup is a niche setup that's a case of role compression to fight enemies that have a high armour or high HP single targets, as well as high HP mobs that would give a typical RFHG team trouble. Those enemies can either be paired up, such as Gunners and Gladiators comps seen in Shattered Connexion ranking, or separate compositions that shows up in the same area of a mission map. 416 Mod helps at thining out the mobs with her 6s ICD Grenade and to a lesser extent her second grenade.

For that, she is usually left at Position 7 so HGs on Positions 5 and 2 can benefit from RF cooldown reduction tiles.

In the 1990s, the US army collaborated with H&K to develop a new carbine for use in close quarters. Up until this point, the weapon of choice for such a situation was the venerable MP5, however, it suffered greatly as body armor became commonplace; the existing M4 Carbine didn't have that problem, however, it was too long. H&K, using the knowledge it had acquired from its successes - the G36 and fixing the L85 to actually work, and its failures - the unadopted XM8. Initially, it was named H&K M4, but this name was already copyrighted by Colt.

H&K started by scrapping the M4's gas system, and replacing it with a short-stroke gas piston as used on the G36 and XM8. Along with intentionally over gassing the system, it resulted in a more durable and reliable rifle especially in adverse conditions, such as MARITIME AND extreme cold where the direct impingement system used by the M16 and M4 had never fared well.

A 416 variant, the M27 IAR, takes advantage of the gas piston system. As hot combustion gasses don't return to the receiver, the entire gun stays cooler. This allowed for the M27's intended purpose of being a lightweight rifle that could easily handle automatic fire while allowing the user more mobility, replacing a portion of the heavier and cumbersome M249s.