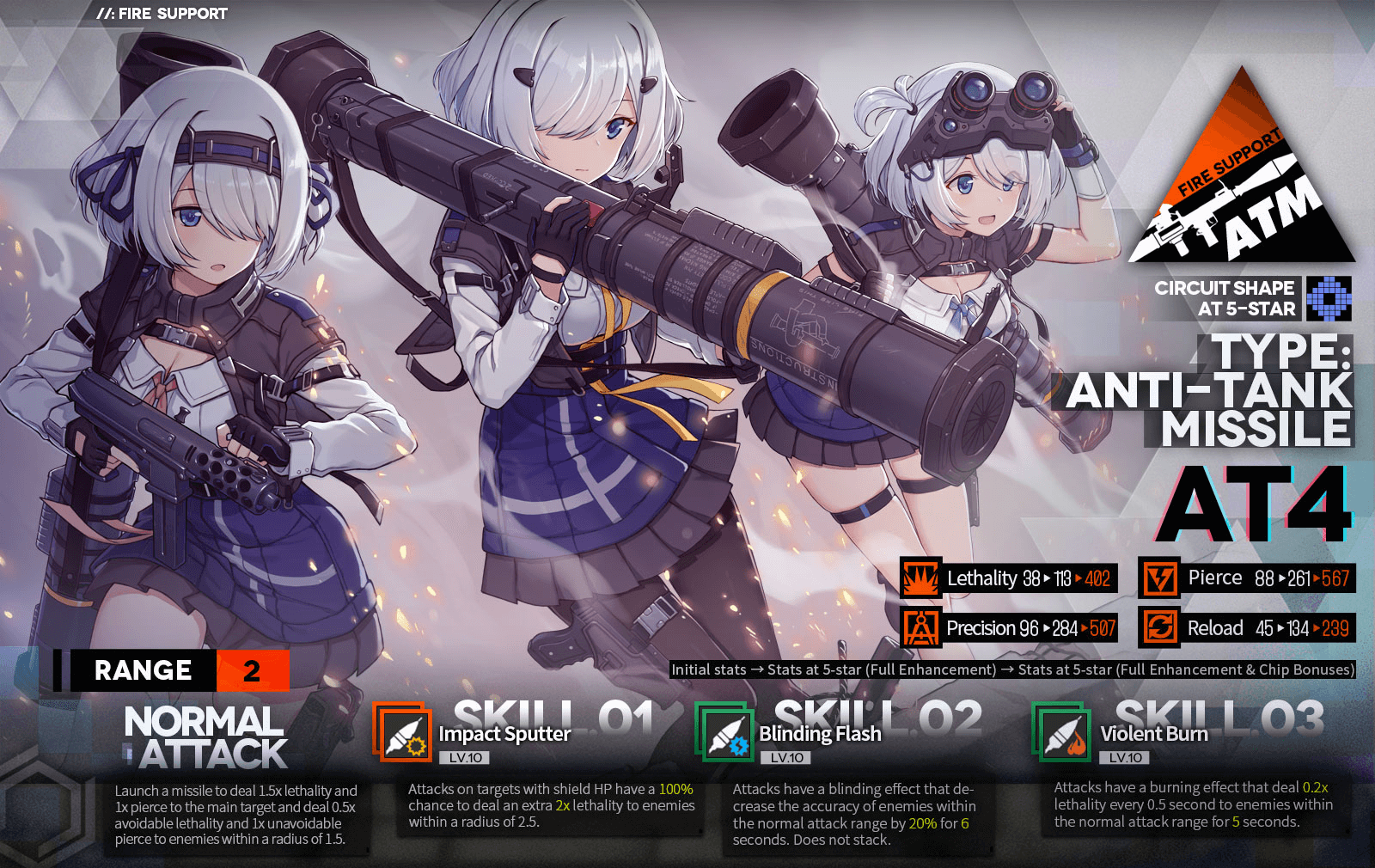 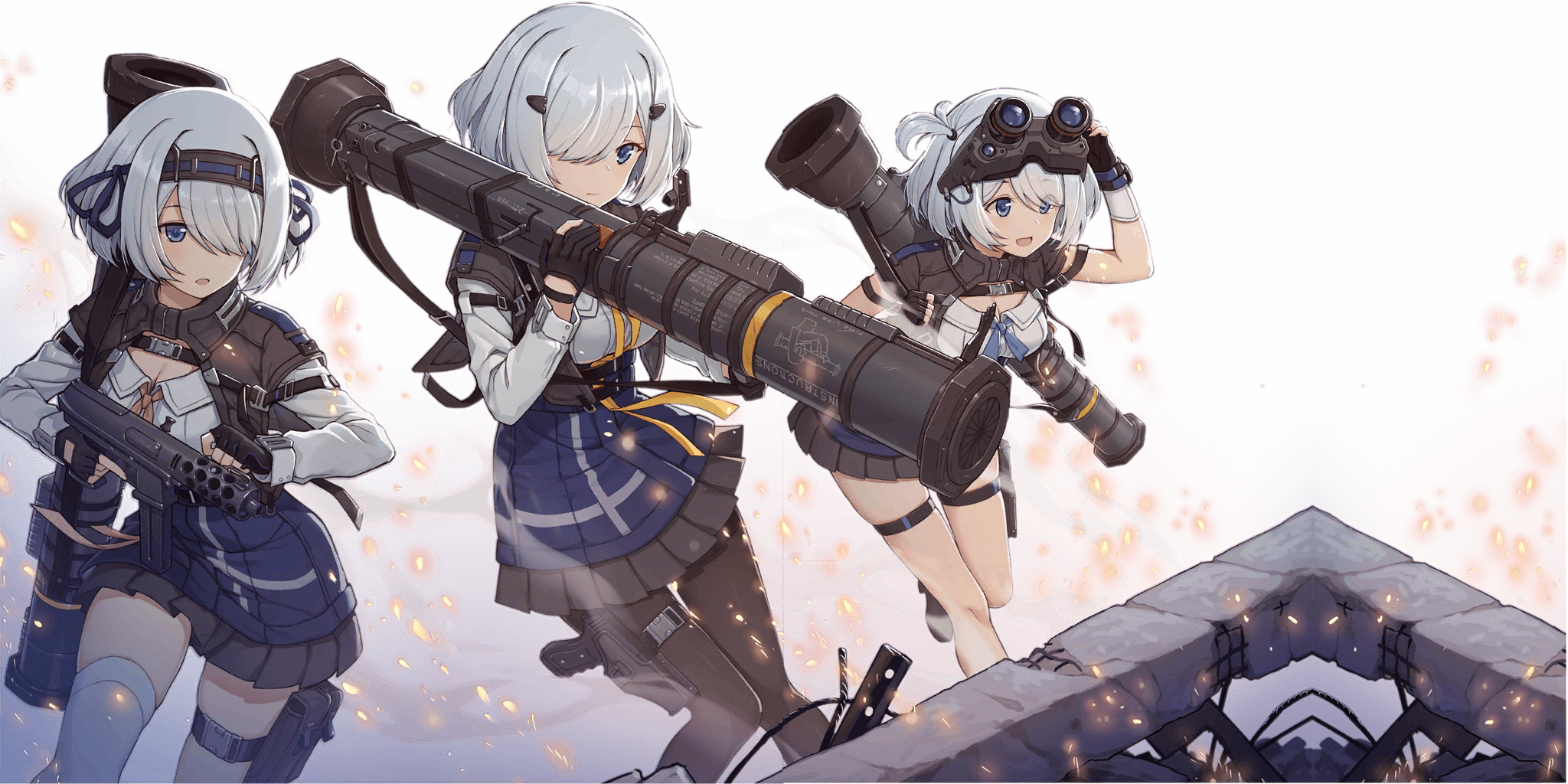 AT4 is an anti-tank missile like BGM-71, and functions similarly. Her most important stats are Lethality and Pierce, and she prioritizes enemies with the most Shielding.

The high Pierce stat of AT4 makes her work well for breaking enemy Force Shields, and her skills that scale off Lethality allow AT4 to perform as a better all-rounder than BGM-71 due to some of her Pierce budget being reallocated to direct damage. Her lower range of 2 tiles gives her much of the same limitations as BGM-71 when fielded on maps.

AT4 does well when both a moderate amount of Pierce and direct damage are needed, but due to the nature of her as a reward HOC, players may not have her at as high of a rarity as BGM-71 and thus would prefer BGM-71 anyway.

AT4 comes second to BGM-71 as an excellent HOC for hard countering enemy Force Shields, and should be raised to level 40 then 60 (as soon as the player finishes upgrading the Training Range to Level 10) so that AT4 can equip 5★ Chips to raise her two most important stats, Pierce and Lethality.

Because most enemies have shields that would be one-shot anyway by AT4 despite her lower Pierce value, she's a perfectly fine substitute for BGM-71 in most scenarios (note that some particularly tough enemies will have very high shield values that necessitate the deployment of BGM-71 to reduce them in time). Once players manage to raise AT4 to 5★ rarity (not possible with Theatre rewards alone), she can perform better in certain situations due to her higher upfront damage. Until then, BGM-71 will remain generally preferred by most players who played since the HOC feature launch due to the head-start she has in rarity and skill training.

Thanks to Ceia for providing the footage

Players should prioritize Chips with high Lethality and Pierce when equipping AT4.

After Pierce is maxed or nearly maxed, investing in Lethality is recommended to let AT4 effectively differentiate herself from BGM-71.

While Precision and Reload are less important, they can be increased if the player is able to do so with minimal opportunity cost.

Since the player will be rearranging the Circuit Board each time AT4 increases in rarity, it's not necessary to rotate (calibrate) Chips until she reaches 5★ rarity. BGM-71 should get the chips with a lot of Pierce while AT4 should get the chips that have a lot of both Pierce and Lethality.  It is nevertheless relatively safe to enhance Chips (even low rarity chips) so long as the enhancement fodder is of the same color, since you can simply feed your enhanced chips to better chips and have most of the stored EXP (80% of its accumulated EXP) carry over.

Note that in particularly challenging fights, AT4's shield break will be insufficient by herself; it is recommended to bring BGM-71 for those battles.

The AT4 (also AT-4) is a Swedish unguided anti-tank missile produced by Saab Bofors Dynamics - the same manufacturer of C-MS. It's a huge commercial success and is one of the most widely used anti-tank weapons today.