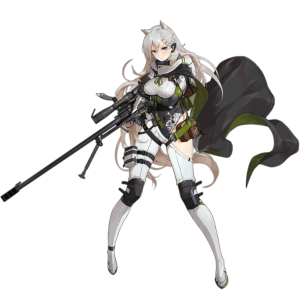 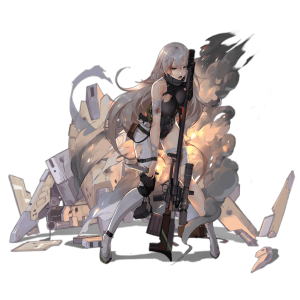 KSVK is a clear reward from Isomer, and a limited drop from the Freaky Pandemic rerun. Despite her high base FP, she is very underwhelming before her neural upgrade, with one of the worst skills in the RF class. Her AoE bamboo will rarely activate before the battle is over, and can only contribute a paltry amount of damage. However, her neural upgrade completely reworks her kit and turns her into one of the most powerful rifles. She is not recommended to be used before her neural upgrade, as there are cheaper and much better options. She should still be raised however, in preparation for her future upgrade.

KSVK’s neural upgrade gives her a passive skill that goes into effect on any debuffed enemies, retargeting to the closest debuffed enemy and firing an AoE shot similar to her skill 1’s bamboo. When used in conjunction with debuffers, KSVK’s skill 2 can have very high uptime, allowing her to take on endgame content such as deathstacks of Hydras or SWAP SF. She performs the best against enemies with a high number of links, as each shot hits all links at once. Her skill 1 does not have to be leveled for her to be effective, as even with the multiplier buff, it is still underwhelming. KSVK is recommended to be brought to Mod 3, as her special equipment can give her a sizable boost of +10 FP at max enhancement.

T-Doll Costumes
Moonwalking in the Dark

KSVK can fire on the closest target with her nuke, and deal bonus damage to enemies directly behind her target as well. This targeting is unique compared to the rest of the RF class.

KSVK’s initial cooldown is 5 seconds, with another 1.5 seconds of aiming time, meaning she won’t be able to kill any priority front target until it is too late.

KSVK’s abysmal multiplier on her skill, combined with her long ICD, severely hinders her usefulness. Compared to other bamboos or self-buffers, KSVK’s skill provides next to no impact in battle.

When KSVK’s skill 2 passive is online, each of her attacks behave like a grenade, ignoring armor and never missing. Additionally, each attack splashes damage to enemy links, as well as enemies behind the target. This passive makes KSVK extremely effective against bunched up groups of enemies.

Against large stacks of dangerous enemies such as Hydras, normal RFs struggle because of their backline targeting, which allows some enemies to slip through. KSVK Mod, on the other hand, can consistently target the frontline as long as the enemies are debuffed, clearing out waves of enemies and preventing them from hitting the echelon.

KSVK cannot reliably activate her skill 2 by herself, and as a result, requires an ally to apply debuff on the enemy, preferably this ally should have a good uptime and debuff coverage. Fortunately, there are many sources of debuffs that pair well with KSVK Mod, such as Beach Fairy, HP35, Stechkin Mod, AT4, and 2B14.

Against enemies with 1 link such as bosses and some elite enemies, KSVK’s skill 2 provides limited use, as the lack of extra damage from link splashing essentially means she just has a minor self-buff to damage. KSVK does best against high link enemies, otherwise normal self-buffers would perform better.

While KSVK is not the most useful RF to begin with, if one is intent on putting her in a team, she should be paired with a powerful self-buffing RF to pick up the slack for her mediocre performance. Normal HGs, such as M950A and Grizzly, will synergize decently.

KSVK Mod needs to be paired with allies that can provide debuffs, but she can work in both exodia comps as well as in conjunction with another RF.