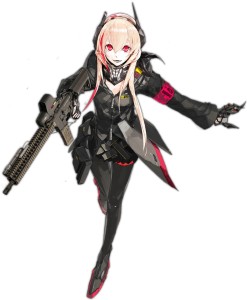 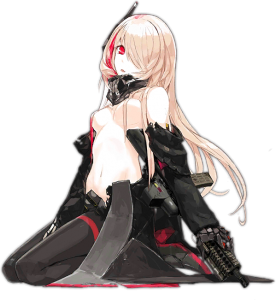 M4 SOPMOD II is a member of the Anti-Rain team and one of the story-locked ARs, obtainable only by completing Chapter 3 Stage 3 for the first time. She is not obtainable by any other means, so do not disassemble her or use her as enhancement fodder under any circumstances. SOPMOD is also a powerful AR choice for players at most stages in the game, as she has good stats and a strong AoE skill that provides significant damage in many situations. She may have a few weaknesses that leave her just shy of being the best, but overall M4 SOPMOD II has a strong kit as part of an AR/SMG Echelon. She is a solid choice to use from the moment you get her.

The introduction of #2 Chips flips M4 SOPMOD II’s main advantages on their head. Since she and ST AR-15 have a second accessory slot in place of a body slot, they are entirely unable to use this powerful equipment. Her base stats are still respectable, and she is still a strong pick for beginner usage when they are unlikely to have many chips, but she can fall behind other ARs that are capable of using the chip on end-game content.

M4 SOPMOD II MOD is a large improvement over her already strong base form. With even higher base stats and extra bonuses, SOPMOD MOD’s single target damage output is more than respectable. Her skill 2 allows her to cover a much wider range of enemies on the battlefield and finish off stragglers. Combined they make her a really powerful AR.

Taking her to Mod II for the power of skill 2 is the minimum, with the special equipment at Mod III just being a nice bonus.

If for some reason you are unable to use HK416 MOD, SOPMOD MOD is the next strongest AR grenadier option.

M4 SOPMOD II MOD still has the benefits of high base stats and her skill 2’s coverage, but the existence of the #2 chip and her continued inability to use it means that she loses a little relevancy. Not much since no other grenadier AR can quite do what she can, and 416 Mod is already better, but still.

Damaged
Birdsong in the Woods

M4 SOPMOD II has two accessory slots and 1 magazine slot as opposed to one accessory slot, one magazine slot, and one T-doll slot that ARs usually have. This means that instead of equipping an unimpactful exoskeleton that does not affect her damage output, Sopmod can instead equip another scope. This means she can equip an EOT and VFL at daytime to really boost her performance past competitors, or a VFL and PEQ at night-time to entirely ignore the disadvantage of night battles.

SOPMOD also has above average base Accuracy and ROF, which provide her with good base DPS in any situation.

With the career quest reward update, M4 SOPMOD II is given to the player as a 3-link lvl 30 AR, saving the effort of raising her from scratch when you get her in 3-3. As new Commanders lack a consistent source of cores, saving up 18 cores in leveling her is a major difference.

As an Anti-Rain doll, M4 SOPMOD II is only obtainable once. You cannot obtain dupes of her. So spending cores to link her to 4x and 5x is mandatory, although she is very worth the cost.

At 8 seconds just to start her windup animation, M4 SOPMOD II’s skill does not make an impact until almost 10 seconds of combat.

As a grenadier AR, Sopmod cannot significantly improve her own damage output with her skill before her grenade goes off or during extended battles. This makes her weaker in fights that are short or ones that are not affected much by grenades like boss fights.

Keep your M4 SOPMOD II please. If you somehow have managed to mistakenly discard her, you can retrieve her from the index at the cost of 9 cores.

M4 SOPMOD II has strong, relatively well-rounded stats, with her base Accuracy and RoF at nearly 10% above the AR class average. With proper Formation buffs she can output significant DPS even without skills activating.

SOPMOD’s main strength over most other grenade ARs comes in not her stats, however, but in her unique equipment slots, which allows her to have more consistent DPS in more situations. In day battles SOPMOD can equip an EOT sight to increase her grenade damage, and in night battles she can equip a PEQ to avoid the accuracy penalty, all while retaining the benefits of a VFL scope and HV ammo. This gives her a significant advantage over other ARs at night due to not losing the VFL scope that provides ARs with a significant portion of their DPS.

SOPMOD’s Skill allows her to effectively clear out groups of enemies via the 12x damage multiplier. Its 8 second initial cooldown is a bit of a weakness inherent to Anti-Personnel grenades as the skill often will not have the chance to activate in shorter battles. By the time her grenade lands, the frontline may have already taken a heavy beating.

Tough enemies that have low links and don’t group up such as bosses and doppelsoldners are also something grenadiers such as M4 SOPMOD II struggle against, as their single target damage is rather weak due to a lack of a self-buffing skill and reliance on splash damage. SOPMOD is better off than most due to her stronger base, but still the drawback is still there.

Overall, M4 SOPMOD II is a solid AR choice for most stages of the game due to her well-rounded stats and strong Skill. SOPMOD’s overall kit makes her more than good enough to make the cut in most AR/SMG Echelons for both new and veteran players.

Upon Mod 1, M4 SOPMOD II gets 30% critical hit chance, which is higher than the 20% most ARs have. More crits gud.

Her Special Equipment is an improved EOT disguised as a dinergate with a familiar color scheme that can apparently fire laser beams. Combined, her base stats make her an incredibly strong AR even without a self-buff. More bang gud.

SOPMOD’s skill 2 creates 3 secondary explosions, which can finish off her target or reach enemies that were not in her original splash radius. More boom gud.

When M4A1 only marks 1 target with her regular attacks, all of M4’s secondary explosions focus on it, potentially wasting her skill 2.

Her 8 second initial cooldown is unchanged, so it still only affects fights that drag out. The secondary explosions occur directly after the main skill, so they come even later. This makes her overshadowed by 416 mod, the AP grenade AR mod that does lower their own initial cooldown.

Her base critical hitrate improves to 30%. Her base stats improve. She gets a glorified EOT. All of this combines to take her already strong base stats and special quirks to the next level, matching basic self-buffer ARs in terms of DPS without her own self-buff.

SOPMOD MOD’s skill 2, Hysterical Circus, improves her original skill massively. On top of their cooldowns, Anti-Personnel grenades have an issue of their small radius making them sometimes only kill single targets that happen to be isolated. SOPMOD MOD’s Skill 2 attempts to solve this by randomly spreading out three other weaker grenades to reach other enemies right after the first one detonates. This can finish off weakened enemies or hit portions of the pack that she completely missed with the initial grenade, boosting the reliability and effectiveness of her skill massively.

There are some issues with the skill however. If the aim was to spread out M4 SOPMOD II MOD’s secondary explosions, then she has anti-synergy with her sister M4A1 MOD. The Seal of the Avenger mark causes SOPMOD MOD to focus all of her secondary explosions onto that target, removing any chance of extra coverage entirely.

Unfortunately, M4 SOPMOD II MOD is overshadowed by the existence of another grenadier AR mod. HK416 MOD has a pretty massive advantage over her by simply having an AP grenade skill that is 2 seconds faster, where the window for damage dealing before the frontline collapses occurs more often.

Besides those drawbacks, M4 SOPMOD II MOD is still a very solid AR in general. Her kit is strong. She covers one of the main problems with AP Grenades. Her stats can contest with even selfbuffing ARs. Taking her to MOD II is a decent investment for almost any player, with MOD III being a bonus if you have the luxury to get the special equipment.

To capitalize off of SOPMOD’s good stats, add more buffs.

Since SOPMOD’s full contribution comes rather late in fights, a frontline that can stall well until then is a good choice as well.

Stacking too many grenades together lowers the effectiveness of each one. The AR that SOPMOD is paired with should probably be a self-buffing one to clean up the ones that she leaves behind or beating enemies that are not affected by her grenade much.

Despite being listed in-game as separate units, M4 SOPMOD II is not a different weapon than M4A1 but rather a set of mass modifications to the M4 Carbine system. The SOPMOD kit itself is simply a set of accessories, including grips, thermal and night vision optics, suppressors, and grenade launchers. The modularity of the M4 system is reflected in-game by their unique ability to equip two accessory pieces, and is possibly referenced in SOPMOD’s enhancement line, “Great Evolution! Christmas Tree!!” which indicates that she sees her modularity and attachments like ornaments on a christmas tree.