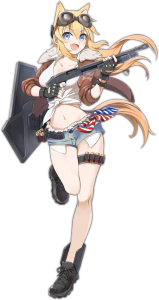 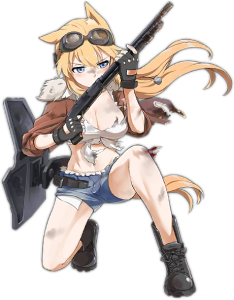 “IDW DA NYA”, but as a Shotgun. M500 is likely to be the first Shotgun of many Commanders as they get her upon completing 4-3E. As Shotguns can only be produced on Heavy Doll Production, they are the most expensive class in the game. Shotgun’s high raising expense considered,  M500 coming at level 60 with 3 links helps reduce her cost compared to others. She is a useful addition to a Commander’s growing roster once they encounter enemies that require SG tanking as they progress toward more recent content. However, her armor is on the low end from being a 3 star SG, and SGs are a niche class as a whole, which means she gets phased out in favour of shield SGs like S.A.T.8 or DP-12.

IDWDANYA SG comes back as another zero to hero mod, unlike her SMG counterpart. Boasting a passive that is activated by every sort of buff that’s not a shield or movement buff (sorry Calico Mod), M500 Mod becomes one of the best SGs available, topping out S.A.T.8 and DP-12 to the point that a new Commander can forego using their first True Core Mask on S.A.T.8 entirely. In a manner similar to Valmod, M500 Mod can get shield constant uptime with a Python or Nagant Mod setup, and while she requires another ally in her column for the shield to activate, even on normal setups she can regularly activate her shield. As the meta is slowly shifting toward drawn-out fights, M500 Mod's ability to consistently negate damage with the right setup is what makes her MVP, especially in Mirror Stage. Seasoned Commanders greatly benefit from acquiring her mod, and even newer Commanders who have Python or Nagant Mod leveled.

Being rewarded to Commanders at level 60 and 3 links, on top of being a 3 star SG, means that she is a cheap doll to raise to 90x5, both XP and Core wise. For newer Commanders, this means they can level up her without incurring the hefty costs of raising a doll from level 1 or of raising a 4 or 5-star doll.

M500 has one of the few useful SG skills: armor buff. This means that paired with FP debuffer HGs, she can tank enemies whose Damage values are way higher than her Armor values.

In a traditional MGSG team, M500 can hit both MGs on positions 1 and 7 if fielded on position 9 with a very useful 18% Damage buff.

While being a 3 star means that she is cheap to raise, it also means that her Armor base stat is on the low end, alongside RMB and M1897. As SGs are already niche, and there are only a few 3-star SGs, M500 gets phased out quickly in favour of SGs with higher base stats, such as S.A.T.8 or KSG.

As SGs have a niche use by nature, SGs with damage negation skills, such as shield skills that S.A.T.8 and DP-12 have are preferred, both to avoid AOE attacks that bypass dummy link protection, such as Uhlan nades and rams, and to reduce the repair bill against enemies that can only be tanked with SGs, like Judge and Pyxis.

S.A.T.8’s main drawback is the requirement to be on the frontmost row for her shield to activate, while DP-12 only shields herself. M500 Mod, on the other hand, can shield up herself and any allies on her column as long as she gets a buff from any source: herself, allies, or fairy talents. As any allies in her column can get shield, M500 Mod can be used in specific setups to take out deathstacks that need AOE shielding, like shown in the gif below:

M500 Mod gets a much-needed armor stat increase, bringing her on par with most 4-star SGs, and her direct competitor, S.A.T.8. She still lags behind two other SG competitors for drawn-out tanking: LTLX 7000 (25 armor) and RMB Mod (23 armor).

Being able to stack up to 75 shield HP puts her leagues above S.A.T.8, whose skill gives only a 35 shield HP. Her shield skill being passive also means M500 Mod is not hindered by reload times, unlike S.A.T.8.

With either a 5 star fairy, which brings a guaranteed talent activation, a 4-star fairy with white talent and prayer for good RNG, or Nagant Mod, M500 Mod can get a shield as soon as the battle starts. For battles that already start with enemies shooting, like fights against Judge and Pyxis, this is essential to mitigate incoming damage.

M500 Mod needs another ally in her column for her Skill 2 to activate. While usually, she won’t be alone, she may end up getting buffs while she is being kited, which means her shield won’t be activated.

While M500 Mod can still be used effectively without either of these HGs, she still needs a Python or Nagant Mod to constantly activate her shield, which is what makes her shine. As Python is tied to Continuum Turbulence farming, and Nagant needs to be Mod II at least, that means M500 Mod can’t be used to her fullest by newer Commanders.

As she hits positions 1 and 7, M500 should ideally be placed on position 9. Being a 3 star SG, she wants as much armor buffing as possible to compensate for the low base armor stat. Therefore, MGs like Negev, Lewis, QJY-88, who have Armor tiles, are her best friends.

Nagant Mod and Python are her besties, which means Commands will want either of these HGs in position 4. Having a requirement for an ally in her row means she needs to either be in a 2SG MGSG team, or in an RFHG team that has another HG in her column. KSVK Mod is also a great pair, as her tiles reduce the cooldown on M500 Mod’s skill, which means it can also activate her shield more often.

Mossberg 500 is a series of pump-action shotguns manufactured by O.F. Mossberg & Sons. introduced in 1960, all model 500s are based on the same basic concept designed by Carl Benson, with the name "Model 500" covering an entire family of pump shotguns designed to chamber 3-inch (76 mm) "magnum" shells. The standard model holds five 2.75-inch or five 3-inch shells in the magazine and one in the chamber.

Fun fact: Despite belonging to the same family in real life, M500 and M590 do not share any connection in Girls’ Frontline lore.

Fun fact 2: M500 is often meme-ed with IDW, possibly because both have animal ears, blond hair, and blue eyes. It can also be because IDW represents the cat and M500 represents the dog, in a cat-dog relationship.

Fun fact 3: As she was originally intended to be a dog trainer, M500 has a built-in signal compiler in her digimind that allows her to understand dogs. This is revealed in Project Neural Cloud story. (Credits to Marsomir).