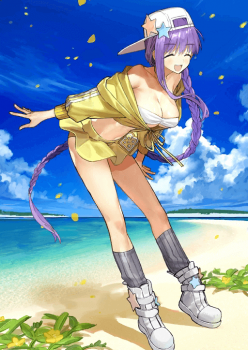 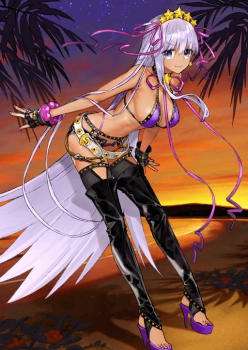 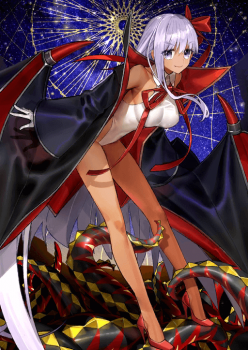 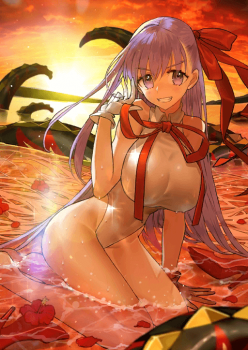 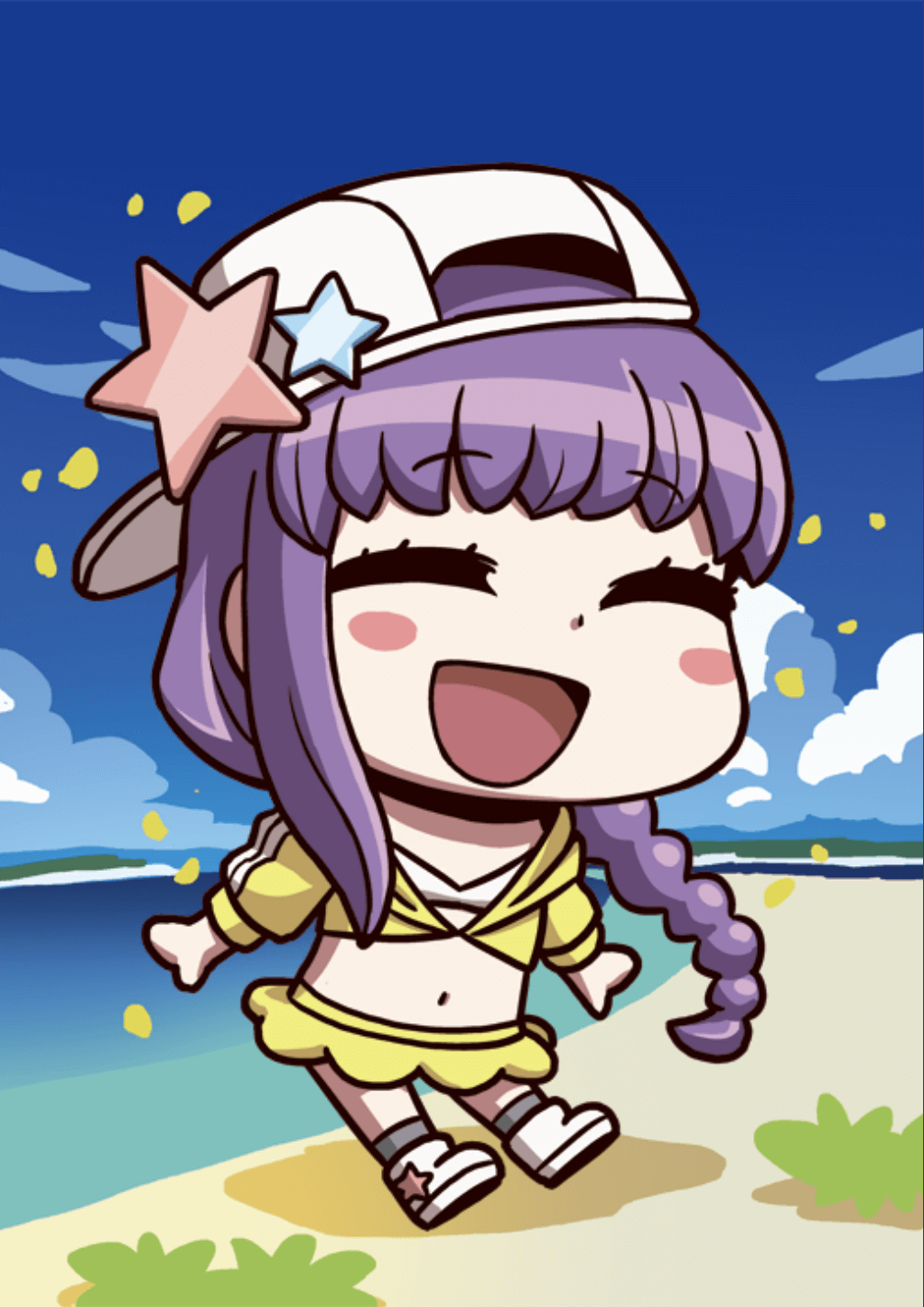 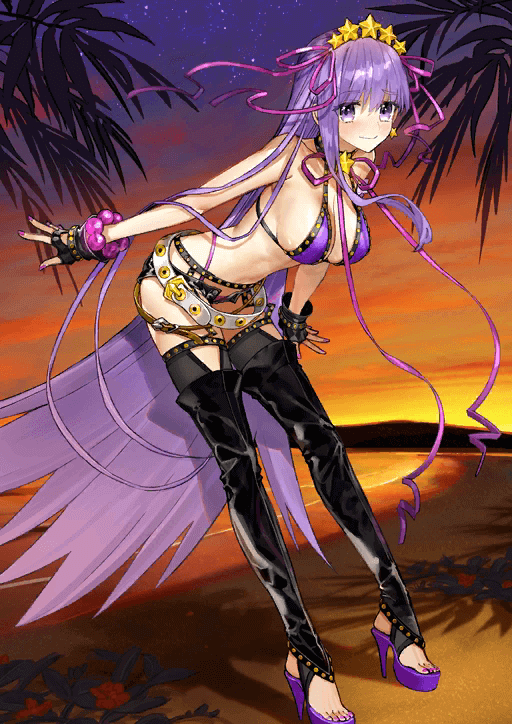 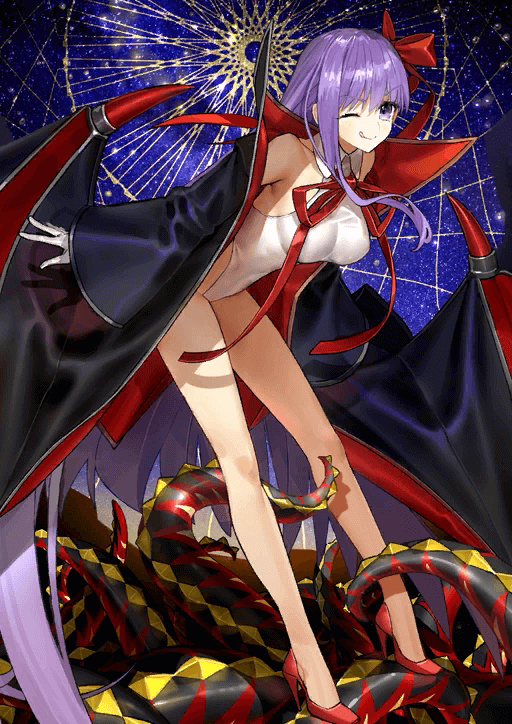 Locks currently dealt set of Command Cards (3 turns).
(Command Cards do not get reshuffled when the skill is active)
(The effect is removed if at least one party member is defeated, or Command Shuffle / Order Change are used)
Gain Critical Stars every turn (3 turns).

One Who Swallows the Land EX

Apply Burn Immunity for yourself.

Entity of the Outer Realm B

Gain 2 Critical Stars per turn.
Increase your Debuff Resist by 8%.

Deals damage to all enemies.
Decrease one enemy's Charge by 1.

Chance to further decrease one enemy's Charge by 1.

Last Resort of the Abyss

When equipped on BB (Summer),
Increase all allies' Arts and Buster Card effectiveness by 10% when she is on the field.

“Give me a break. I thought you knew my true self already, yet you are still using me? I’d be lying if I said it didn’t make me happy, but if it continues like this, you’ll get a Bad End, you know?

Ever-scheming, unpredictably devilish and overwhelmingly cute, our favorite kouhai from the moon is here to make trouble again, but this time in a killer swimsuit(s). Still keeping her signature Moon Cancer class, BB (Summer) is a Buster-centric, multi-functional Servant with one of the most unique support skills in the game, and a self-sufficient skill set that allows her to be a Support san Farmer and Critical Damage Dealer all at the same time. What do you mean it’s cheating ? This is just a normal occurrence for BB-chan !

BB (Summer) is most famously known for her third skill - Faceless Moon, which completely locks the current Command Card available for 3 turns (excluding Noble Phantasm) and grants BB herself a Critical Star Regen buff. In practice, this skill is exactly as powerful as it sounds, being able to support powerful Damage Dealers to secure their favorite Brave Chain for three whole turns. Even outside of her card-locking utility, BB (Summer) still has an excellent skill set. Self-Modification EX is a dream for any Critical-based Servant, ensuring BB to hit hard and regenerate a lot of NP as a byproduct when this skill is active and having the Critical Stars to utilize. Aura Pork Poculum A combines multiple powerful effects into one skill, and covers her needs for NP Charge, Steroids and Survivability at once. With Aura Pork Poculum, her AoE Buster can make BB a sufficient wave-clearer for most neutral nodes with lesser HP and a decent AoE Damage Dealer in general. Last but not least, Faceless Moon Critical Star Regeneration effect, when combined with her passive Existence Outside the Domain B make her a fantastic Critical Star Generator, be it for her own or for someone else.

Cheat-like as she may have been, BB (Summer) is not without flaws. By virtue of being a Moon Cancer, BB has very few opportunities to utilize her class advantage. Furthermore, the high cooldown on her powerful Aura Pork Poculum also makes her performance as a frontliner in lengthy battle lackluster. As it packs too many useful effects but with different purposes, resulting in awkward timing of the skill more often than not. In practice, this will severely lower her survivability as well, as most of the times it will be used for offensive purposes.

While there are certainly tons of things to say about her, BB (Summer) is undoubtedly a highly useful Servant whose niche is highly unique and can serve multiple roles at the same time. Not only will she make Masters’ lives easier, she will certainly make the game a whole lot more fun and open more possibilities for creativity.

BB (Summer) card-lock mechanism is the only one of its kind. While this is still subjected to the RNG nature of the game card cycling mechanics every 3 turns, with a bit of card-counting and luck, Masters can predict a favorable hand and upon reaching that, lock it for 3 turns with BB (Summer).

With Self-Modification, BB (Summer) has great Critical Potential, especially with its high up time (3 turns effect, 5 turns cooldown). As BB does not have her class advantage most of the time, this skill allows her to keep up in terms of normal cards damage and in the rare case that she does do bonus damage, this will skyrocket her damage output.

BB (Summer) only has a rather middling NP Generation per hit, but between her Critical Potential, 50% NP Gauge battery from Aura Pork Poculum and Art Performance boost from Territory Creation passive, she has no problem charging her NP Gauge fast and consistently. This grants her incredible flexibility in terms of Craft Essence choices and team composition as she is a lot less reliant on NP Battery support.

Aside from card locking, Faceless Moon also grants BB a strong Passive Critical Star Generation buff that lasts over 3 turns. Combined with her Existence Outside The Domain passive, BB can get up to 12 Critical Stars per turn without attacking. The 3 turns duration and the nature of Passive Critical Star Generation also synergy very well with both her own Critical Potential and card-locking combo with powerful Critical-centric Servants like Jeanne Alter or Minamoto no Raikou.

BB (Summer) does not have the best base Attack to start with when compared to her fellow SSR Servants. Additionally, Avenger enemies are exceptionally rare, and quests that require Master to fight several Avengers are nigh nonexistent. As a result, her damage will usually be much weaker than Servants of the same level but with class advantage, be it normal cards or Noble Phantasm.Even when boosted by both Self-Modification and Aura Pork Poculum, BB will find it tough to overcome the class advantage bonus that other Servants will enjoy against specific enemies.

Packing several incredible effects at once, it is hardly surprising that Aura Pork Poculum has a naturally high cooldown. Due to this, both her damage buff and survivability tools will come up very infrequently even at maxed level. Thus, BB (Summer)’s Performance in lengthy battles will be rather lackluster.

BB (Summer)’s sole survivability option is tied to Aura Pork Poculum which is also her offensive steroid. Most of the time Masters will find it better to use this skill for the NP Battery and offensive self-buff, meaning the timing of her dodge can be off, resulting in her lackluster survivability.

All three of BB (Summer)’s skills are incredibly powerful in their own right, but the priority for leveling them may vary depending on how Masters want to use her. If farming is the main priority, Aura Pork Poculum will be the most important skills. If Masters want to turn her into a Crit machine, then Self-Modification will be highly recommended. To fully take advantage of her Crit-based Support, raising Faceless Moon early has its merits. All in all, for general performance, Aura Pork Poculum > Self - Modification > Faceless Moon will be the most efficient order, and getting all of them to at least level 6 is a good start.

BB (Summer)’s Craft Essences options are as versatile as she is. With Aura Pork Poculum, she makes great use of Craft Essences that grant 50% and above Starting NP Gauge to immediately fire off her Noble Phantasm for wave clearing. To raise her offensive prowess, Buster Performance, Attack Up or Noble Phantasm Damage Up are all fine choices. With Self-Modification, BB also appreciates Critical Damage Up. If used as a Critical Support, then Passive Critical Star Generation is a great choice, particularly when she can be switched in with Order Change and lock down a favorable chain for a Critical DPS of choices.

There are several Servants in this game whose self-buff lasts beyond 1 turn, but due to card cycling, cannot get off their optimal Brave Chain to fully take advantage of their steroids or specific traits on normal attacks like Katsushika Hokusai. Faceless Moon offers an opportunity to maintain the drawn cards the way they are presented for 3 turns. Both the Order Change command from the Chaldea Combat Uniform Mystic Code, and Servants who can bring out backline Servants such as Arash or Chen Gong are prime candidates to take advantage of this powerful mechanic, given that order change mechanics will not reshuffle any cards for Servants that are not involved in the order change process.