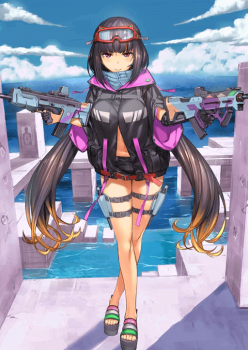 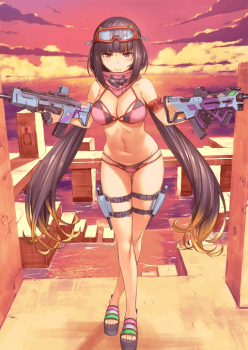 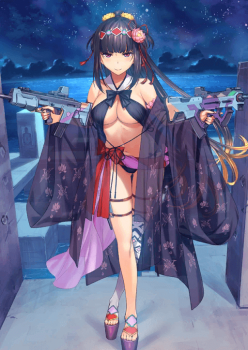 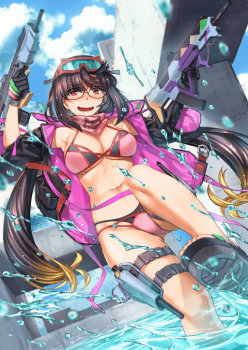 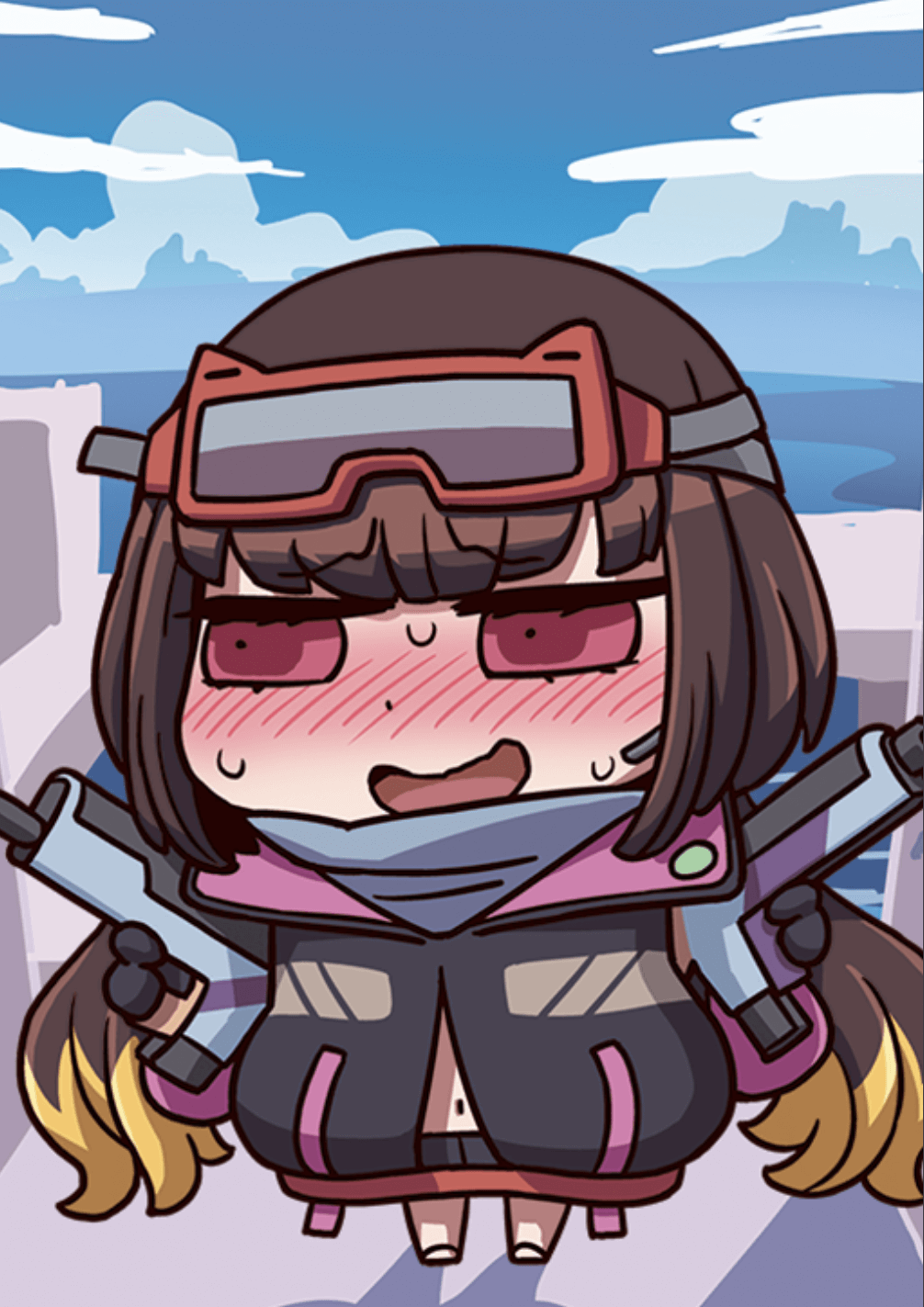 Apply Damage Plus for yourself (Total Card Damage +145).

Increase your Arts Card effectiveness by 8%.
Apply Damage Cut by 200 for yourself.

The Battle Ends and the Sun Sets

Summer is the best! From Assassin to Archer, from Indoor to Outdoor. Alright, let’s play! (Has anyone seen my manuscript?)

After nearly two years of unyielding effort, she has finally succeeded.
Saint Graph swimsuit transformation, complete!
Changing her class from Assassin to Archer and also becoming a bit more active, Osakabehime makes her appearance!
To be specific, she’s crazy about wargames, and her battle royale unfolds day after day and night after night.

“Eh? My manuscript? Oh. Doing well. I really have it so it’s doing well. Eh? You know it’s a lie even without licking my sweat?”

While Osakabehime’s decision to adopt a swimsuit has made her slightly more confident, the underlying person is still the same Servant at heart. Nevertheless, having chosen to indulge in summer’s liberating mood, she brings her battle royale-honed FPS skills to bear down on her enemies, acting as a well-rounded damage dealer who also has notable supporting capabilities!

Despite having an AoE Buster NP, Osakabehime comes with a QAAAB deck, and she complements this setup with Chiyogami Battalion Commander, which grants a 3-turn performance buff to both her Buster and Arts cards. Critical hits form her other main source of damage. Aside from her naturally high Star Weight, Osakabehime has two Critical Damage buffs from her NP and second skill Shooting (FPS), the latter of which also acts as a hard defensive skill. Osakabehime also boasts significant supporting capabilities, courtesy of her NP’s party-wide Buster and Critical Damage buffs as well as Princess Summer Vacation (Fake)’s Attack Up and Sure Hit.

As with many 4-star Servants with an unupgraded AoE NP, Osakabehime’s biggest problem is her generally unimpressive damage, which means that she is hard-pressed to qualify for a primary damage dealer slot. Furthermore, despite having a sizable amount of party-wide damage buffs on paper, half of said buffs are locked behind her NP, and as she otherwise offers little in regards to sustain or NP charge, it is often more efficient to simply bring along a dedicated support instead.

While Osakabehime is far from being a perfect Servant, her all-rounder nature makes her a viable choice for most stages, especially those featuring Saber enemies. Not only that, but her allies will also be grateful for the support she provides, be it in the form of guns or her splendid army of origami!

With the capability to deal AoE NP damage as well as critical hits for single-target, Osakabehime is able to deal damage in a versatile manner. She is also able to gain NP rather easily thanks to her QAAAB deck, which gives her easier access to Arts chains.

A maxed Osakabehime is able to provide a total of 20% Attack Up, 20% Buster Up, 30% Critical Damage Up on top of Sure Hit to her entire party for 3 turns, which is rather competitive as far as damage support goes. In addition, as a damage dealer, Osakabehime herself also benefits from these buffs, which can be considered hitting two birds with one stone.

Despite Osakabehime’s various buffs, there are limits to the damage she can deal with an unupgraded AoE NP, especially as her NP’s own buffs are applied only after its damage is calculated. As a supporting damage dealer, the damage she deals is generally sufficient for waves with lower-health Saber mobs, but boss waves will often see her damage fall short, especially without the aid of external buffs.

While Osakabehime’s party-wide damage buffs can definitely be seen as a selling point, it can also be argued that bringing along more dedicated supports is more effective, as they can also cover the party’s other needs, such as Critical Star Generation, NP Charge or healing. Furthermore, Osakabehime’s high Star Weight can interfere with a critical-oriented main damage dealer, which can be a problem with limited critical star supply.

Osakabehime’s second skill applies a 3-turn Focus Target debuff on a selected enemy target, meaning that the party cannot target other enemies until the debuffed enemy is defeated. While normally a non-issue in most farming stages, this may cause a problem in stages with multiple boss enemies.

As all three of Osakabehime’s skills give her some kind of offensive advantage, it is recommended to get them to as high a level as possible. At the same time, none of the skills are ‘mandatory’ to max, and can generally be left at any level the Master considers sufficient.

As a damage dealer, Osakabehime loves Starting NP Gauge Craft Essences, preferably with NP Damage Up and Attack Up as secondary offensive effects, or to a lesser extent Buster Performance Up and Arts Performance Up. Instant Star Generation is also an option when she is to be used as a switch-in damage support.

After struggling for a little less than two years, she has finally done it. After making some changes to her Spirit Origin, Osakabehime dons a swimsuit!

Changing her class from Assassin to Archer has helped make her a bit more active. In particular, this Osakabehime developed something of an addiction to survival games, and spends her every waking hour hurling herself into every battle royale she can!

Height/Weight: 158cm, 50.4kg
Origin: History
Region: Japan (Himeji Castle)
Alignment: Neutral-Summer
Gender: Female
She claims that she succeeded in losing 1kg...if you round down. But it can also be said that her Morph skill has not been affected either.

Okki suddenly found herself wondering: Is this how my life should be?
Her encounter with Master was a once-in-a-lifetime chance, so maybe it wouldn't be such a bad idea if she mustered up her all her courage to try an outdoor mode. And it might be inspiration for her next manga.
So she decided.
With the help of her friend Kiyo-yo giving her seventy percent encouragement, twenty percent support, and ten percent covering fire, Osakabehime finally managed to transform into a swimsuit of her own.
And thanks to a certain boxing workout regime created by a boxing Servant who was also one of the original swimsuited Servants, she managed to lose a little bit of weight.
All she has to do is to resist gaining back all the weight during the fall.

Fortress Construction: B
Another iteration of Territory Creation.
Using her experience as the guardian deity of Himeji Castle, she is able to create fortresses.
At B rank, it can surely withstand even bombardment.

Shooting (FPS): B
Reflexes gained by playing games.
At times she may repeatedly jump to evade attacks, but don't think too hard about it.

Princess Summer Vacation (Fake): A
Why would there be a (Fake) even though I'm a princess!?
Hellooo! I'm a bona fide princess here!
Oh, that (Fake) is for the vacation part!? Manuscript? Eh? ...Eh?

Hakurojou Senshiki Mirimiri Naito Fiibaa.
A battalion of origami (1000 sheets) that shoots, gives cover, and unleashes bombs.
It's a truly massive assault!
By the way, milli-mili is short for "million military," which is meant to represent the amount of origami she used in her Noble Phantasm.
...Okki hasn't realized that "milli" actually means a thousand. Master understood the moment she explained, but didn't have the heart to point it out to her.

There are a total of a thousand origami soldiers.
Hermit crab tanks and flying fish fighter jets also count as one, so it may not look like much, but their combat efficiency has her fold...er, seal of approval.
The overwhelming surge of their attack is the embodiment of her idea that quantity reigns supreme over quality, and such strength is second to none.
...Actually, their sheer volume is no laughing matter.

After all, the miniature sized soldiers assault the enemy by flying through the air in fighter jets and barreling through the land on tanks. There are just so many of them, their paper bodies fluttering about, easily evading incoming attacks.

Their strength is in their numbers, though they are quite vulnerable to fire, being made of paper...

She has become a tad more active since donning a swimsuit, but her basic nature hasn't changed. In other words, she prefers playing and having fun to backbreaking labor. That's Osakabehime for you... She really does love events.

Her outfit's coloring makes all her military hardware look like toys, but since the bullets are made of magical energy, they have more destructive power than more normal weapons.

As a side note, her attitude towards Master is no different than when she's an Assassin. A maiden's feelings are complicated, mysterious, blind, and merciless.

Limited - Can only be summoned during certain events
Past Banners