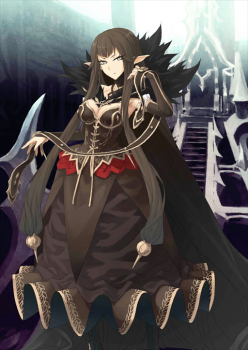 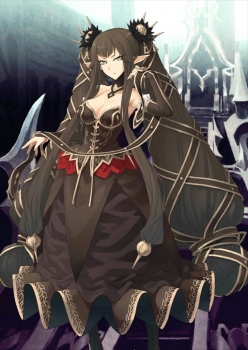 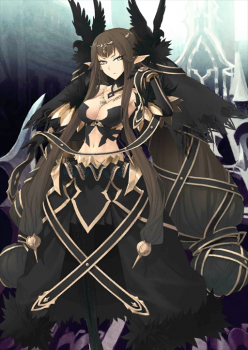 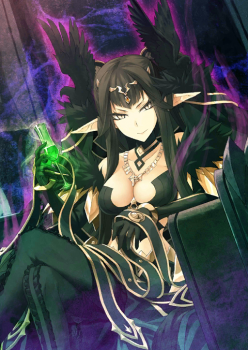 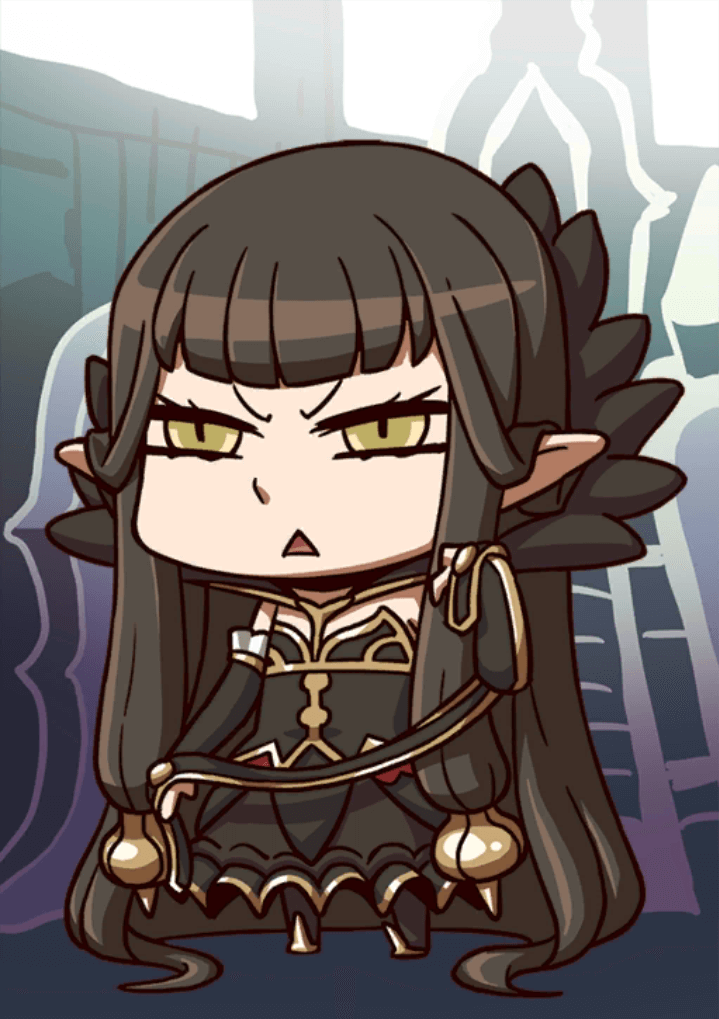 Deals damage to all enemies.
Increase DEF for all allies by 20% (3 turns).

(Upgrades after Rank Up Quest 1)

When equipped on Semiramis,
Increase all allies' Buster Card effectiveness by 10% & NP Strength by 10% when she is on the field.

“Fine. I will let you have a taste of this poisonous wine. Feel privileged.”

Reputed to be the world’s first poisoner, Semiramis was one of the most famous figures to ever rule an ancient empire. The Assassin-class Empress of Assyria is a Buster-type AoE damage dealer who, despite her story, has only one poison-related skill.

Instead, Semiramis’ NP is the famed Hanging Gardens of Babylon, an AoE Buster NP which increases her allies’ defense and, after upgrade, applies Buff Removal Resist on them for one turn. Despite being an Assassin, Semiramis also comes with a triple Arts deck and Territory Creation EX, the hallmark traits of a Caster-class Servant. Lorewise, this is caused by her Double Summon skill, which increases her NP gain and eliminates her weakness towards Caster enemies (however, it doesn’t give her an advantage against Assassins). Due to these, as well as Familiar (Pigeon)’s NP Charge, Semiramis boasts considerable NP Gain despite a rather mediocre base. Rounding up her kit is Alcohol of the Arrogant King, activated with a cost of 8 critical stars, which applies poison and, more importantly, a large Buster Resistance Down debuff to all enemies — increasing not only her damage, but also that of her allies.

Semiramis’ biggest weakness is her low NP damage. With an unimpressive attack stat and the ever-problematic 0.9x Assassin-class damage modifier, her damage boosts are not enough to make up for it, and she ranks low even among her 5-star AoE Assassin peers. This is made even more complicated by the nature of her third skill, which may not always be available due to its cost, and as a debuffing skill, it may miss or even be outright nullified by Debuff Resistance buffs. She also has no hard defensive skills to speak of, which forces her to rely on defensive supports.

All in all, while Semiramis’ double class theme brings huge benefits to her NP gain, it solves neither of her largest problems, which are a lack of damage and her unreliable third skill. Still, with a Buster typing and high personal NP gain, a well-supported Semiramis flourishes in mixed-class Cavalry stages, where her ability to fight Casters on equal grounds truly shows its worth.

While Semiramis’ base NP gain is nothing impressive, Territory Creation and Double Summon’s buff increase it to above average levels. Furthermore, her triple Arts deck means that she is able to form more Arts chains in comparison to her peers. Lastly, Familiar (Pigeon) helps her top off her NP gauge, and allows even early-turn NPs with the help of CEs and supports.

With a Buster-type NP and an atypical triple Arts deck, Semiramis boasts a rare compatibility with common Buster supports, who are able to provide the damage increase she so desperately needs, as well as critical stars to activate her third skill. She also pairs fairly well with other Buster-type damage dealers thanks to her Buster Resist Down, enabling her to be utilized in switch-in strategies.

With the help of Double Summon, Semiramis is able to temporarily face Caster-class enemies on equal grounds. While this ability is more often than not just a fun gimmick to play around with, it does give her an edge over her peers in stages featuring a mix of Cavalry classes.

Despite technically having two damage boosts, Alcohol of the Arrogant King is Semiramis’ only major battery, as Hanging Gardens’ buff is fairly negligible unless Overcharged, though as an NP Damage Up, it scales very well with most commonly available buffs. Coupled with her mediocre attack stat and the 0.9x Assassin-class modifier, Semiramis is hard-pressed to compete with her peers in terms of NP damage, especially before its upgrade.

Alcohol of the Arrogant King applies its damage boost in the form of an AoE Buster Resistance Down. As a debuff, enemies with Magic Resistance have a chance of evading it, and it is very unlikely to hit those with Debuff Immunity/Debuff Resistance Up (though her first skill helps with this somewhat). Furthermore, the skill cannot be activated unless at least 8 critical stars are available, which means that it may not be available when the situation calls for it. While this problem can be solved through the use of CEs such as 2030 or star-generating supports, using the skill on the first turn remains a problem unless instant star generation methods are brought along as well, which puts another constraint in the team building phase. Lastly, Alcohol also comes with one extra cooldown turn compared to most other damage boosting skills.

Although the Hanging Gardens of Babylon increases the team’s defense for 3 turns, Semiramis has no other defensive skill, let alone a hard defensive one such as Evasion/Invincibility. She has to rely on her supports as a result, which can pose a problem against enemies with fast-charging NPs.

Semiramis benefits greatly from having all of her skills leveled, and all of them should ideally be maxed. With access to supports, however, her second skill can generally be left for later. While leveling her skills, it is generally the best course of action to keep the cooldowns of her first and third skills as close to each other as possible.

Semiramis’ CE consideration revolves around maximizing her NP damage, while ensuring that said NP could be fired when needed. As a result, her options usually include some form of damage increase, such as NP Damage Up, Attack Up, or Buster Performance Up, with varying degrees of Starting NP Gauge depending on the stage and available supports. Thanks to her third skill, she can also utilized as a switch-in Servant to buff other Buster Servants.

The world's oldest-known poisoner and the empress of the Assyrian Empire. She is famous for poisoning her husband, King Ninus.

At one point, she was also rumored to have been the one who spearheaded the construction of one of the Seven Wonders of the World, the Hanging Gardens of Babylon (They were actually built by Nebuchadnezzar II).

Semiramis was born to the goddess Derketo and an unknown human. She was abandoned at the waterside by an embarrassed Derketo. However, as Semiramis was a descendant of the gods, she survived, and was raised by a flock of doves.

Semiramis grew to become a beautiful maiden, and she married an aging general named Onnes. However, King Ninus, an ambitious leader, was quite taken with Semiramis's beauty, and ultimately tore the couple apart. The separation greatly saddened Onnes, who killed himself. Semiramis had no choice but to accept King Ninus's affection.
When war broke out, Semiramis's unorthodox tactical advice led her nation to victory. This led to King Ninus recognizing her talent, which prompted him to ask for her hand in marriage.
However, on the day of the wedding banquet, King Ninus collapsed, writhing in agony, and died. The citizens whispered that Semiramis had poisoned the king to avenge her late husband.
And so Semiramis became the Empress of Assyria, and commanded numerous expeditions and construction projects as regent for decades.

As these Hanging Gardens are an object of empty vanity, the conditions for deploying them are strict.
A specific amount of stones and soil taken from a specific ruin from a very specific time in a specific place in the Middle East must be gathered. Only after this is done, and a three-day ritual is conducted, will this Noble Phantasm be ready to function.

As its name suggests, it manifests as a giant floating fortress.
As long as she is within this fortress, all of Semiramis's stats increase dramatically. Her notoriety also increases to its highest possible level, and she gains a number of modifications that make her attacks much more advantageous to her as well.

During a certain Holy Grail war, this garden was the site of a decisive battle. Its eleven defensive spells shot down a fleet of airplanes, but those defenses were ultimately breached by a holy maiden's banner and a flying knight's attack.

Presence Concealment: C+
Conceals a Servant's presence completely. Ideal for convert operations.
Once she goes on the offensive, however, this skill's rank drops sharply.
However, this limitation does not apply when she is slipping poison into something.

Territory Creation: EX
A mage's ability to create territory in which they are empowered.
By gathering physical materials, her gardens surpass even a temple.

Double Summon: B
Manifests as a Servant who possesses both Assassin and Caster Class Skills. A rare characteristic granted only to a handful of Servants.

She is a cunning and ambitious empress who would tread upon anyone, friend or foe, using poison to psychologically break them or simply to kill them.
Highly suspicious of others, she will dispose of her own allies, even when such an action would be unnecessary. This also means that she has absolute confidence in her own powers (when within her own territory, at least).
Because of this, she is absolutely incompatible with other kings, nor does she ever make the first move.
Should there ever be a time when the Hanging Gardens of Babylon reach their final form, she will possess unparalleled power within them, and so will become far more aggressive in her actions.

She is quite brazen in her attitude toward Master. Had their task not been restoring Humanity, there's a better than good chance she would have simply ignored Master's orders. Not to say she would betray Master, but rather that she would work independently to achieve Master's goals. Masters who mean to reprimand Semiramis for her attitude will first have to prove that they are of a higher station than she is, which will be a near-impossible task on its own. Even so, she herself used to be at the mercy of others' whims, so the smart Masters will take the high road by simply gritting their teeth and learning to tolerate her selfishness.

Since she is Lawful-Evil, she does not hesitate to take unorthodox actions. There even remains a chance that she may poison her own allies if it means it would throw someone off their guard. Most troubling is that her Presence Concealment allows her to deftly sneak poison into any meal or drink. Masters should be warned that they might well end up feeling sick or being manipulated without ever realizing it.

...But even in this, there is an exception. Should her Master be someone who seeks only her power, tirelessly collects years' worth of resources for her Hanging Gardens, remains steadfastly polite to her, while also being cruel at times, she will dedicate all she has to the service of such a Master. Probably.