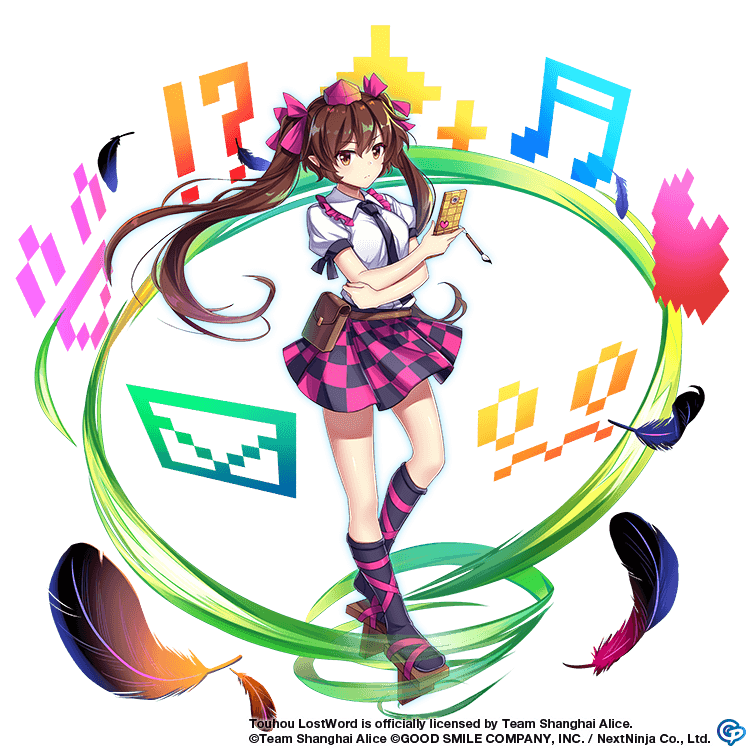 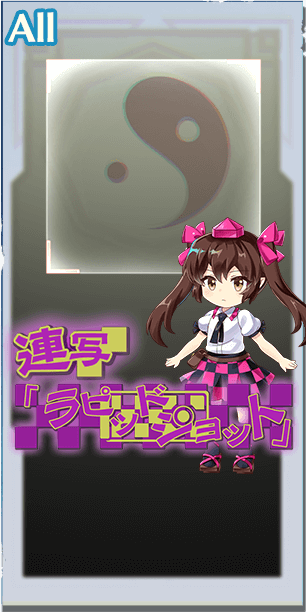 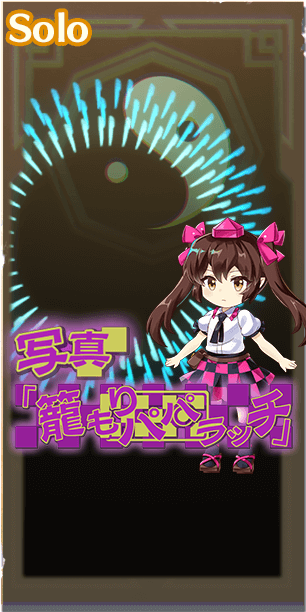 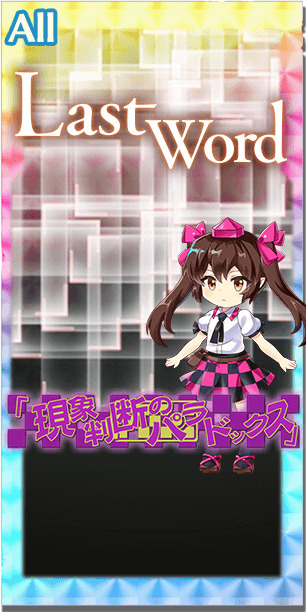 Immune to Barrier Status: Blind. When attacked with Blind, Spirit Power 0.20 UP.
When using Graze, own Agility 1 level UP (1 turn).

A fellow crow tengu in the field of reporting, Hatate Himekaidou attempts to rival Aya Shameimaru’s Bunbunmaru Newspaper with the Kakashi Spirit News. It may be difficult to rival’s Aya’s speed to release news before her, but Hatate’s cell-phone-like camera offers a special alternative: thoughtography. Instead of having to capture incidents in the moment, she can think of distant happenings from inside her own room only to gather the pictures from afar. Of course, Aya usually gets her own papers out beforehand, but at least this purple crow has one method of keeping up. Fortunately, she can also take a break from reporting inside of her house to help in battles as a B Tier Friend.

Hatate brings a decently damaging All-target Last Word, Paradox of Phenomenal Judgment, for farming purposes. It is important to note how based on how many boosts are performed before the attack, the further enemies’ Evasion will decrease and all allies’ Agility will increase. Specifically, both will only be done by 1 level at 0 boosts and will be guaranteed to increase to 2 levels at 3 boosts. This can be troublesome to ensure by herself, as the only method she has of boosting her own Spirit Power is from Skill 2, Kirlian Photography, by only 0.5 or a very situational character ability. Farming is certainly possible with her, but will likely require multiple turns for consistent success.

On the topic of consistency, Hatate provides herself and the rest of the team numerous Accuracy buffs in more difficult fights. Her first skill, Backscatter, will grant the entire team 3 levels of Accuracy UP, even if it costs herself 4 levels of Yin DEF DOWN. If a hard-hitting Friend has Accuracy issues and does not have access to an Accuracy UP story card, Hatate is a perfect ally to back them up. This can also be combined with the Evasion down from Paradox of Phenomenal Judgment as well as a further 3 levels of Accuracy UP from her first spell, Continuous Shooting: Rapid Shot and 3 more from Kirlian Photography.

Hatate’s other significant buffs are for Agility, which is rather fitting for a Speed type character. The combined effects of Paradox of Phenomenal Judgment (2 levels UP at 3 boost), her third skill, Moon (Far Side Photo) (3 levels UP), and Grazing (1 level UP for each Graze for 3 levels total) adds up to 8 levels of Agility UP total, 2 of which can be given to allies as well. She only has Slicing scaling for Continuous Shooting: Rapid Shot after boosting twice and Paradox of Phenomenal Judgment, but the large amount of self-Agility buffs still makes her damage effective.

Just like the art of thoughtography, however, Hatate faces some drawbacks in the long run. First, every skill comes with some form of downside, from less significant like 5 levels of Yang ATK DOWN from Moon (Far Side Photo) (as most of her kit is Yin-focused) to the 4 levels of Yin DEF DOWN and 5 levels of Evasion DOWN that can easily threaten her survivability. The 3 levels of Focus DOWN from her second spell, Photography: Secluded Paparazzi, can potentially lower the damage she has to worry about, but the threat is always present. Additionally, while the great amount of Accuracy buffs are appreciated, other units who can provide these buffs themselves will not find much help in Hatate’s additional levels.

This does not stop Hatate from being helpful in removing the concern of attacks connecting for other Friends while being a quick-witted attacker herself. While her speed might not compare to her other crow tengu colleague, it is fast enough to make a good difference.

The Slicing scaling for Hatate’s spells are as follows:

Hatate’s Last Word requires 3 Spirit Power to achieve the guaranteed 2 levels of Evasion DOWN and Agility UP, meaning Spirit Power UP cards such as Witch of Scarlet Dreams become more necessary. Otherwise, since she buffs her own Agility by 8 levels, increasing her own damage with Yin ATK UP or Yin ATK or Agility stat sticks are more ideal. Unless you really want to get to the maximum 10 levels for some reason.

The ordering of leveling Hatate’s skills can depend on what is needed from her the most, but Moon (Far Side Photo) will focus on buffing the Yin and Slicing bullets of her Last Word the most and will benefit herself the most. Secondly, Backscatter’s ability to increase the party’s Accuracy by 3 levels is more likely to help other Friends over only buffing her own Accuracy in Kirlian Photography. The Spirit Power increase from that skill is rather low as well, so that can be prioritized last.

Character Strengths
+Up to 3 levels of party Accuracy support, as well as 2 levels of Evasion DOWN on all foes
+8 levels of Agility UP works well with Slicing scaling on Last Word

Character Weaknesses
-Mediocre, Wood-only breaks
-Rather selfish offensive buffer
-Accuracy support is unnecessary for units who can self-support themselves