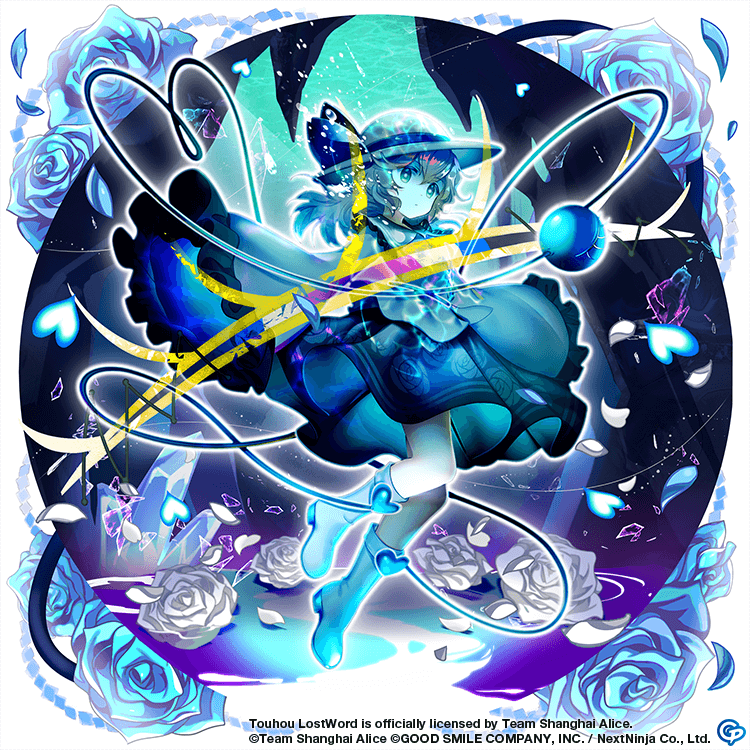 The Spread Shot of Koishi Komeiji from the buried city. She attacks with Underworld roses. Unintentionally hurting others is a common trait between roses, humans, and even youkai. Doing this is not a sign of aggression or hostility, but it might be how they express themselves. You know what they say... Every rose has its thorns.
Growing Pain

The Focus Shot of Koishi Komeiji from the buried city. She attacks with Underworld roses. The feeling of pain provides information that is essential for survival. Once you are an adult, you forget that growing and pain go hand in hand. You could even say that various cultures were formed from the feeling of pain. The mechanics of this feeling are also exploited in battles and warfare. 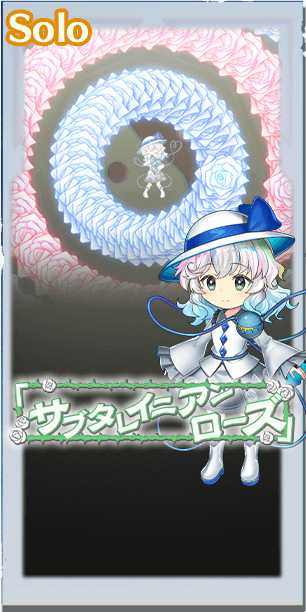 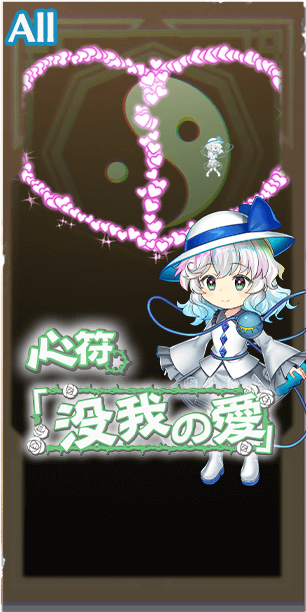 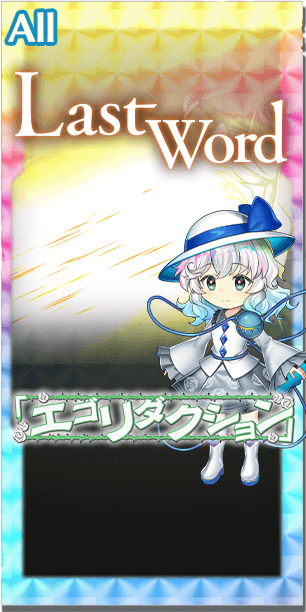 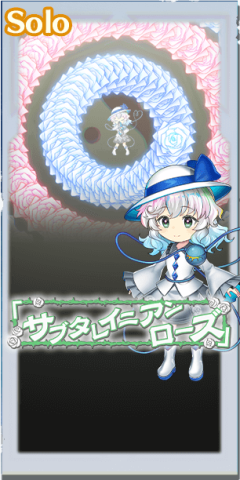 A Spell Card of Koishi Komeiji from the buried city. She attacks with the prickly and thorny part of her heart. Everyone has a secret or two that they wish to keep hidden deep within their heart. However, the secrets kept within your unconscious mind are hidden from everyone, including yourself. The unconscious mind is like a sealed room, and a psychological examination is a way to peek through the keyhole of someone's heart. So, what color are the Underworld roses?
*Pre- and Post- effects assume max level. Effects per level can be viewed here.
Pre-Attack Spell Card Effects 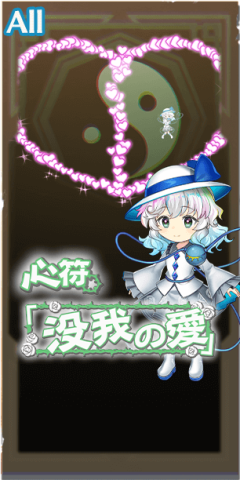 A Spell Card of Koishi Komeiji from the buried city. This is the attack of a satori youkai who cannot read minds. Sometimes when you focus too much on something, you can forget and lose sight of yourself―particularly when you are fully absorbed in creating something or when you are seriously deliberating some critical conundrum. You forget time and hunger, and you are freed from all the worries of the material world. It is almost like attaining enlightenment.
*Pre- and Post- effects assume max level. Effects per level can be viewed here.
Pre-Attack Spell Card Effects 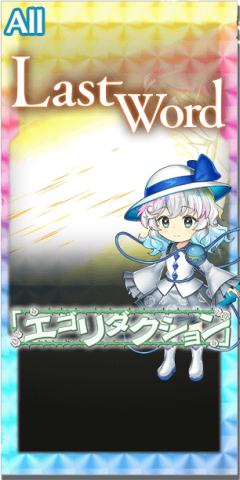 The Last Word of Koishi Komeiji from the buried city (a Touhou LW original). Her sense of self degenerates in this attack. Is love a conscious emotion, or does it come from the unconscious? This Koishi managed to survive countless ages by sheltering her heart and mind within the innermost part of her being. The history of humans and youkai is recent news compared to the history of the planet.

It might finally be the right time for her to open her heart. However, the door that was sealed shut long ago has completely rusted over and will not budge. What should she do? She merely needs to reduce her ego and use that difference in pressure to blast through the door that seals her heart.
*Pre- and Post- effects assume max level. Effects per level can be viewed here.
Pre-Attack Spell Card Effects

For every layer of Barrier Status: Freeze, Paralyze, Poison, or Blind, Yang DEF, Yin DEF, CRIT DEF, and CRIT Evasion 1 level UP.
When using Boost, own Yang ATK 1 level UP (1 turn).
DMG to effective elements 30% UP.

Coming from the F1 universe, Koishi Komeiji strikes fear into the hearts of her enemies. Sporting a new color palette and a myriad of powerful tools such as anomalies and powerful Spell Cards to fight all her foes, Koishi certainly is no slouch.

As with all characters, P cards such as The Witch of Scarlet Dreams and It’s Spring! are always useful for any character. To take mileage out of her spell card’s powerful capabilities though, cards which boost damage like Sporadically Margaret and Protection of Cerpinus are always a great boon to have on her 1st spell card. Alternatively, for her 2nd spell card, She can use cards which boost energy bullets such as Unknown Barrier Team. Finally, to optimize her Last Word’s damage, opt for cards which boost YANG ATK, preferably those with the YANG DEF stat.

With a card that nearly doubles her power, Little Sister and Sweets is her absolute best option when it comes to pure damage. However, for those who may not be able to get that, options like Sporadically Margaret always exist, and Ordinary Magician being a great option for 1st turn nukes.

For set up damage, other than the first two cards, Thunder Beat, Undercover Reporter, and Protection of Cerpinus are all powerful options, with the latter being the best one.

Ideally, the first skill that should be leveled would be her 1st skill, Neurological Zombie, as it provides her with the ability to reach 3 boosts on her first turn, as well as increasing the firepower of Yang attackers in her party. Afterwards, her 3rd skill, Plant Cognition, should be leveled as it not only synergizes with her anomaly breaks, but also increases her damage output overall. Finally, her 2nd skill, Panpsychism, should be leveled as it helps boost both her Yang and Yin DEF up, as well as providing her with even more Accuracy for damage.

+ One of the strongest overall nukers
+ Strong survivability with regards to Defense up, as well as barrier restoration
+ An absurd amount of anomaly breaks, combined with strong elemental coverage to boot.

- She debuffs the party with Poison, which can be a detriment towards the damage that Yang nukers can do