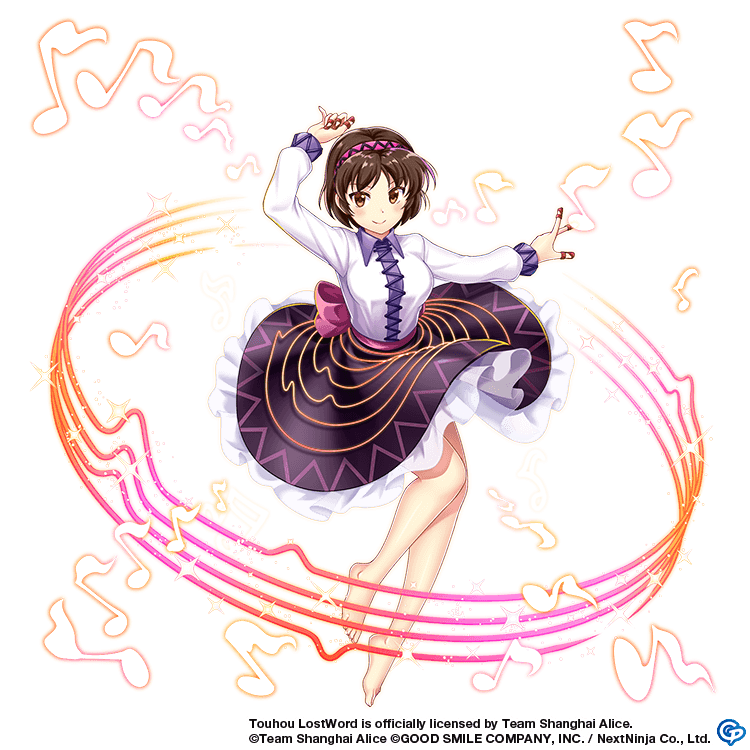 Tsukumogami of an Aged Koto

Yatsuhashi Tsukumo's Spread Shot (a Touhou LW original). This attack reproduces the timbre of a certain string instrument that is similar to the koto. Harp instruments are used by many different cultures throughout the world and a few of them are very similar to the Japanese koto. Furthermore, the harp is treasured as an instrument of import in most of these cultures. Another similarity between all the varieties of harp is that they all have a kind of melancholic timbre.
Harp of Warning

Yatsuhashi Tsukumo's Focus Shot (a Touhou LW original). This attack plays a koto tune that carries and conveys a divine message. Using a koto for communication has a long and storied tradition, with it even being mentioned in Japanese mythology. 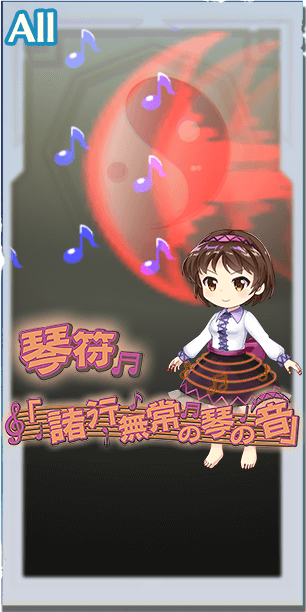 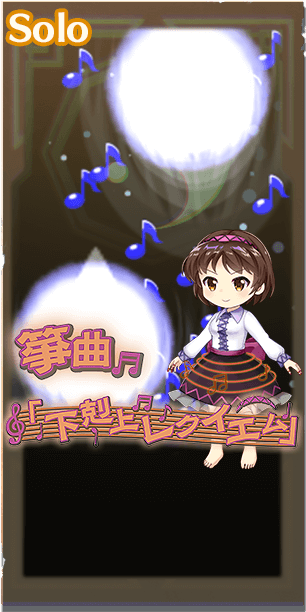 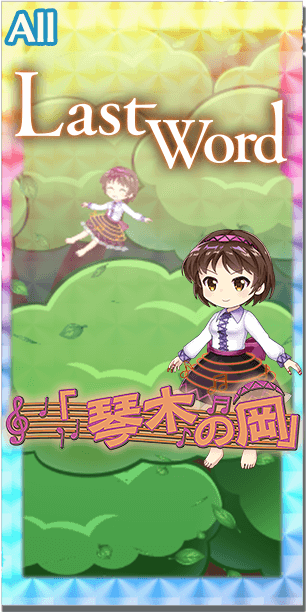 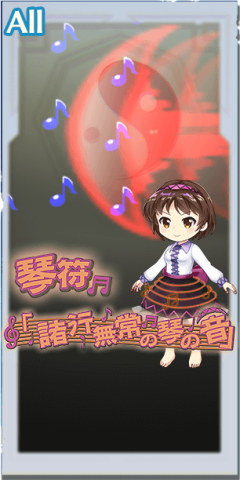 Yatsuhashi Tsukumo's Spell Card. In this attack, she plays a tune inspired by a classic military epic. Impermanence is a major theme in the Tale of the Heike. All things are transient and nothing is constant or permanent. The tsukumogami may have taken this as inspiration in regards to Gensokyo's existing system (the relationship between youkai and the Human Village) in a past incident.
*Pre- and Post- effects assume max level. Effects per level can be viewed here.
Pre-Attack Spell Card Effects 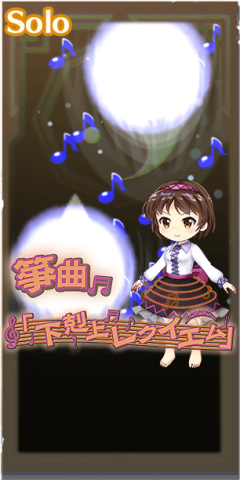 Yatsuhashi Tsukumo's Spell Card. As the name may indicate, this is an attack that utilises rock music. The koto and biwa are both string instruments and could be thought of as distant relatives to the guitar and bass guitar. This could explain why the Tsukumo sisters shouted social satire and about reform when they wished to overturn society, as these are the same expressions that rock music often embodies.
*Pre- and Post- effects assume max level. Effects per level can be viewed here.
Pre-Attack Spell Card Effects
None
Post-Attack Spell Card Effects
None
Koto Tree Hill 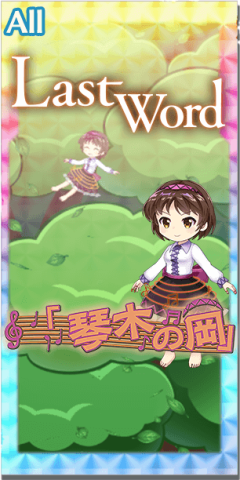 Yatsuhashi Tsukumo's Last Word (a Touhou LW original). A gigantic tree shoots up out of the ground in this attack. There is a story about a koto youkai that turned into a tree after it was placed on a hill. Most trees live much longer than humans, so they can act as a monument for subsequent generations, which is why many folktales feature various things turning into trees.
*Pre- and Post- effects assume max level. Effects per level can be viewed here.
Pre-Attack Spell Card Effects

Nullifies the effects of Barrier Status: Freeze.
When using Boost, own Accuracy 1 level UP (1 turn).

Yatsuhashi Tsukumo, the Tsukumogami of an Aged Koto, is a pretty simple youkai. She’s what’s known as a tsukumogami youkai - they’re sentient objects, born when an item manages to survive for a hundred years. Typically, at least - she and her sister were born when a magical storm overtook Gensokyo (play Double Dealing Character if you want to learn more!), resulting in the birth of new tsukumogami. At first, she wanted to overthrow society, but now she and her sister simply pass their days playing their instruments. Perhaps it's such a lax lifestyle that leads to her being an E-Tier Friend.

For farming purposes, Yatsuhashi isn’t really ideal. Her Last Word deals little damage in a one turn environment due to her lack of buffs and a 1-3-1 layout. You’ll want to look elsewhere.

For harder fights, Yatsuhashi has some useful support, but it’s all undermined by various detriments. Her second skill, Kumiuta: Ogi no Kyoku, gives some Yin & Yang ATK UP - but only 1 level (with a 50% chance for 1 more) of each, and only for 2 turns. Her All targeting Last Word, Koto Tree Hill, does the same, only with a 80% chance for another level - and with not much damage either unless you give her some time to set up (there’s some slicing on it, but not much). It also unfortunately doesn’t do a lot of damage, and it’s somewhat mixed to boot making it harder than normal to scale. And lastly, her Breaks are generally poor, with both Spell Cards having 1/1/2 Wood Breaks for 0/1/2 Spirit Power - she at least gets 4 Wood and 2 Sun All targeting breaks at 3 Power on her Last Word, which is decent though not quite as good as a layout as you'd want. Koto Sign: Sounds of Anicca's Koto at least provides some Spirit Power on use, though that’s of limited use with her poor break potential.

Overall, Yatsuhashi can give some ATK UP to your team, and it’s not like she’s a detriment, but she just isn’t all that great. She’s merely a koto, after-all!

If for some reason you need to squeeze out extra Breaks no matter what, Spirit Power UP is a reasonable option on Yatsuhashi. Otherwise, her best option is Yang ATK UP. For stat sticks, look to Yang & Yin ATK, favoring Yang ATK if you can’t get both.

Yatsuhashi's best option is The Secret God of the Sky, which provides her a massive amount of Heavy DMG UP. If for some reason you’re trying to farm with her, you can use Accuracy UP if she can knock out the enemy without ATK UP support.

Kumiuta: Ogi no Kyoku is her only real skill of note - it’s only a 50% chance for another level of ATK UP at skill level 10, but that’s better than nothing. Her other two skills are rather lackluster, though you can at least get some Barrier Breaks with Kumiuta: Kumoi no Kyoku if you have a Friend who can Break Blind Barriers (though it’s arguable if this is even worth bringing Yatsuhashi for, as it’s only 2 layers on a single target).