Guide to the Cast of Phantom-Human Maid for a Day?! 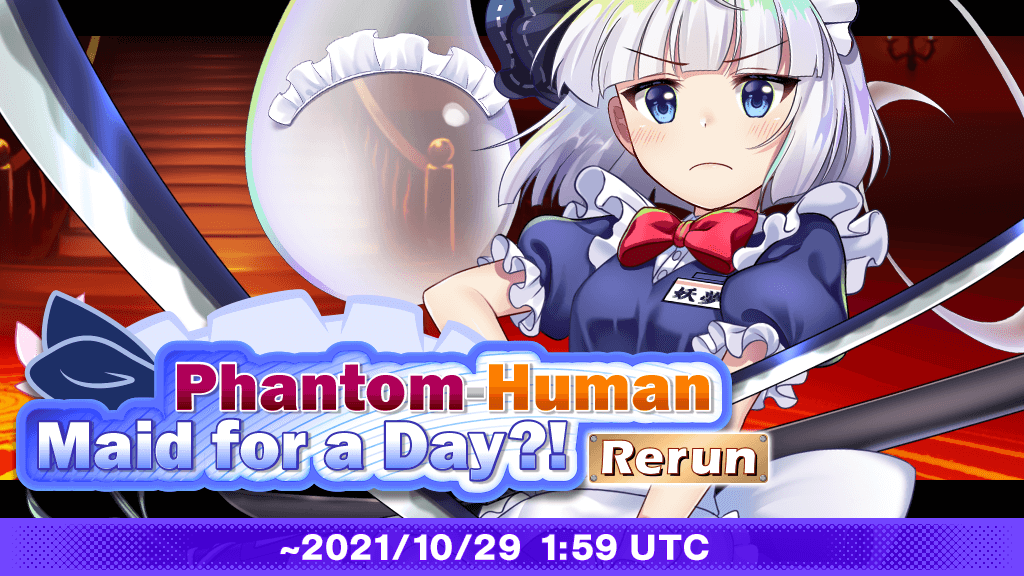 For those of you new to Touhou Project, or even just fans who aren’t quite aware of every last character (there ARE a lot of them!), you may not recognize every face in the new event - or any of them at all! This handy dandy primer will give you a quick rundown of all the faces in Phantom-Human Maid for a Day!?, who they are, what they can do, what games and print works they showed in, and where you can find out more about them! 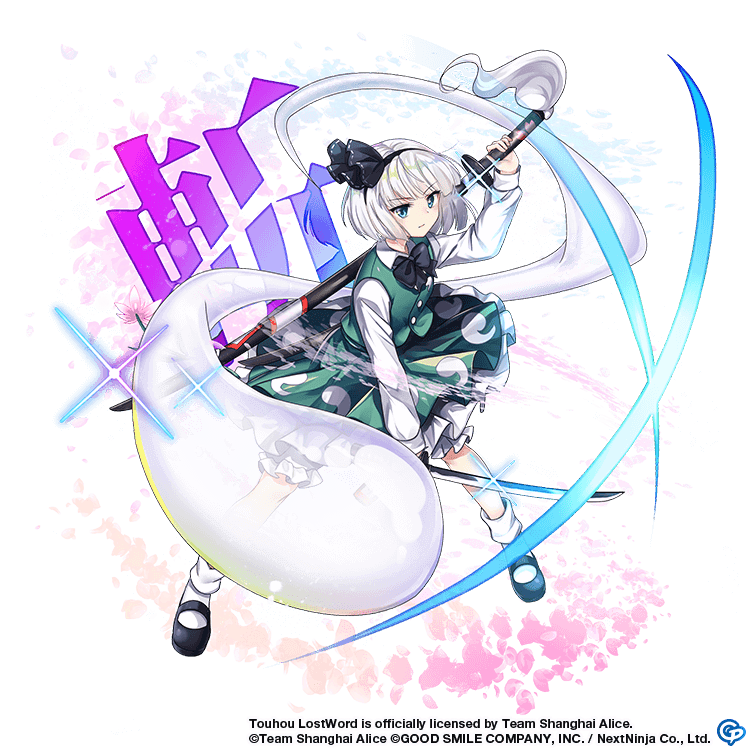 The half-human, half-phantom gardener of Hakugyokurou, Youmu Konpaku made her debut in Perfect Cherry Blossom (2003). Attempting to fulfil her mistress’, Yuyuko Saigyouji, desire to see the Saigyou Ayakashi (a youkai cherry blossom tree) fully bloom, she gathered spring to energize the tree, and attempted (and failed) to stop the heroines from intercepting her mistress’ plans. Since then, she has become something of an incident resolver herself, becoming a playable character in numerous games.

Whilst somewhat airheaded and straightforward to a fault, Youmu is still a loyal girl who would do anything for her mistress, even if she may get exasperated by Yuyuko at times. Whilst officially she’s a gardener, she does pretty much everything for Yuyuko - from cooking, to cleaning, to even teaching the ghostly princess some swordplay techniques. Outside of her relationship to Yuyuko, Youmu’s role in the series tends to be comedic relief, as her appearances tend to involve her getting dragged into things or being sent by Yuyuko to accomplish some sort of task.

Her ability is to handle sword techniques. This is one of the more mundane powers in the series, but has resulted in some pretty flashy moves over the years. If you want more of a taste about what this power’s all about, I recommend you try Immaterial and Missing Power or Scarlet Weather Rhapsody and its expansion pack Touhou Hisoutensoku.

Otherwise, if you want to see more of Youmu, she’s featured in numerous other games and print works over the years, being one of the series most prolific characters. Of the games, Ten Desires and Wily Beast and Weakest Creature are both on Steam and feature some cool Youmu action. For print works, she features heavily in Silent Sinner in Blue, serves a comedic commentary role in The Grimoire of Usami, and Perfect Memento in Strict Sense has a neat in-universe writeup about her. 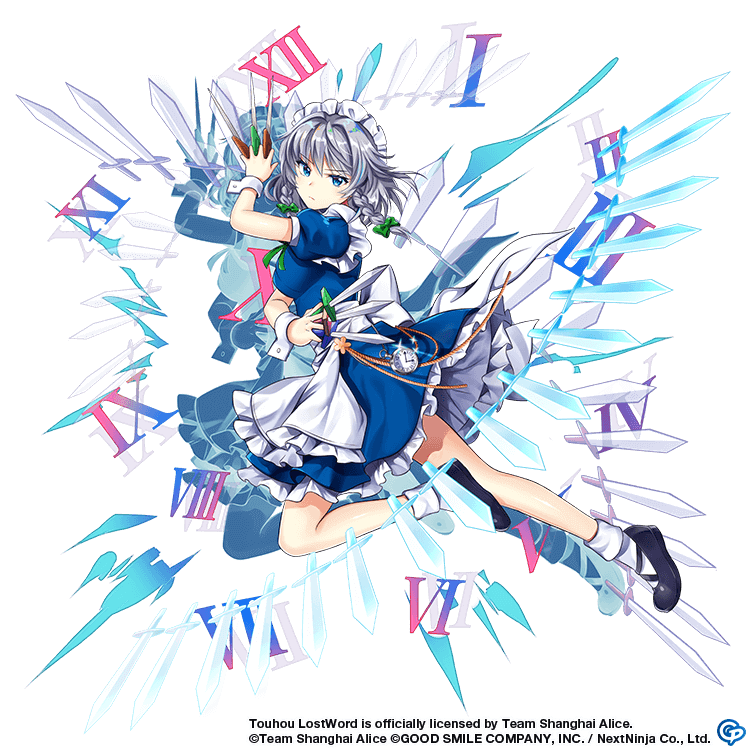 A human maid, Sakuya Izayoi serves as the head of staff for the Scarlet Devil Mansion, making her debut in Embodiment of Scarlet Devil. She attempted to stop the protagonists from interfering with her lady’s, Remilia Scarlet, plans. She failed, although she is somewhat infamous for being the only boss in the series to somewhat successfully halt the heroines, as on Easy mode the player is not allowed to progress further - something future games would not replicate.

Spacey to the point of seeming perhaps even a bit foolish, it’s hard to tell if Sakuya’s just a trickster, or really just a fool. What is for certain is that she’s absolutely loyal to her mistress, and many of her appearances in series involve her doing some task for either Remilia, or the mansion as a whole.

She has the ability to manipulate time and, to a lesser extent, space. She can stop time, slow it down, speed it up, cause objects from parallel timelines to show up simultaneously, and more. For space, she can widen or narrow spaces - perfect to make the already spacious Scarlet Devil Mansion even larger. Outside of her time and space manipulation, she’s fond of utilizing an unhealthily large number of knives in combat, throwing them by the dozens. This is reflected best in games where she’s a boss, or a non playable character, so check out Shoot the Bullet, Impossible Spell Card, or Scarlet Weather Rhapsody if you want more of a taste of it!

It’s somewhat difficult to recommend an exact work for more of Sakuya, as she’s incredibly prolific in the series, second to very few characters. For games, Unconnected Marketeers is the latest entry in Touhou, is on steam, and as good a starting point as any, and she shows up very often in the print works, too many appearances to fully list, although the first four chapters of Cheating Detective Satori are perhaps the best to look at first, as they’ll give you a greater insight to the Scarlet Devil Mansion as a whole. She also features very heavily in Silent Sinner in Blue. 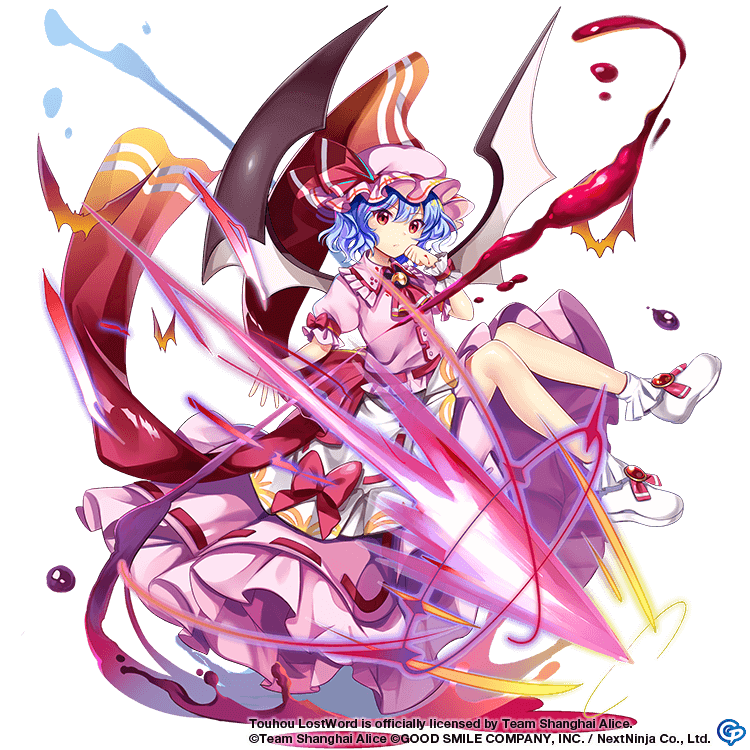 The titular Scarlet Devil, and one of Gensokyo’s only two vampires, Remilia Scarlet made her debut in Embodiment of Scarlet Devil. She covered Gensokyo in scarlet mist just so she could go outside freely, without assistance of a parasol (being a vampire, she is weak to sun), and her plot was quickly foiled by the heroines.

Remilia is an individual both full of herself, and quickly gets bored. As a result, she’s thrown numerous parties over the years, participated in a few incidents (outside of the one that she, herself, instigated), and even once went to the moon simply to kill time.

Her described power to manipulate fate is somewhat nebulous, and is never really explored in series. As such, it can be easier to say she’s defined by her vampire strengths - super speed, strength, and a lack of weaknesses. Scarlet Weather Rhapsody or Shoot the Bullet would both give an excellent idea of the extent of her powers, and the latter is even available on Steam.

If you want to see more of Remilia, for games Imperishable Night gives a rather solid understanding of her character, as would Scarlet Weather Rhapsody. For print works, her interview in Bohemian Archive in Japanese Red gives a good look into her and her relationship with her sister, and her article in Perfect Memento in Strict Sense gives a good idea of how she’s seen in-universe. 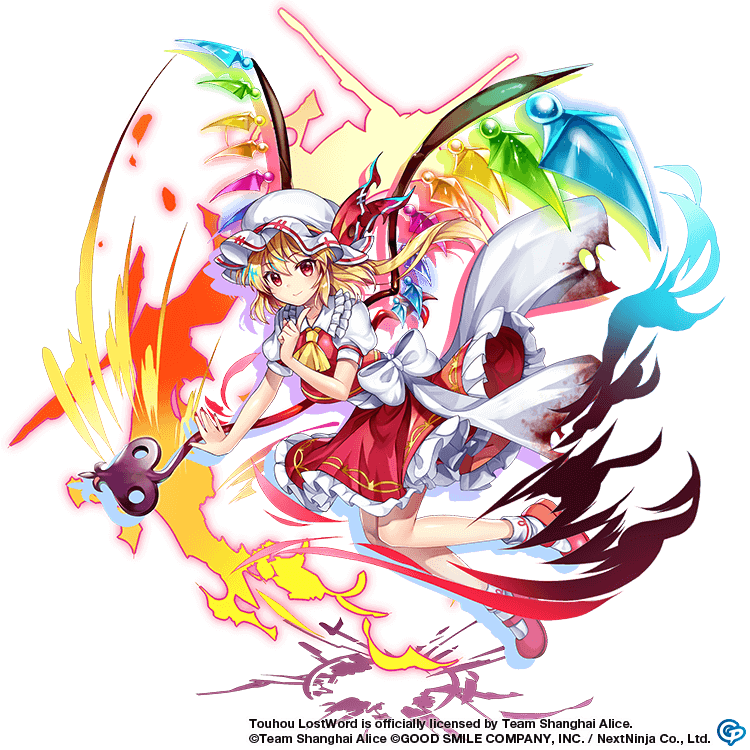 The Scarlet Devil’s sister, Flandre Scarlet made her debut in Embodiment of Scarlet Devil. Bored and trying to make her escape from the mansion for a bit of fun, she was stopped by her sister sending the heroines to the basement to tire her out.

Outside of this, Flandre is a bit shrouded in mystery. She hasn’t had many appearances within the series, but when she does appear, she plays a role as a somewhat aloof and rude little sister to Remilia.

Power wise, Flandre’s is to destroy absolutely anything. Whilst this isn’t reflected very well in the games, her interview in Bohemian Archive in Japanese Red gives an idea of what she’s capable of. Otherwise her most notable skill is to make three additional copies of herself - whilst she only used this for a single spell card in the entire series, fanworks tend to feature it heavily, so don’t be surprised if you see it pop up in them. Additionally, she possesses an unnamed gigantic lump of iron, which she swings around in some of her spell cards.

If you want to know more about Flandre, your best bet is either her interview in Bohemian Archive in Japanese Red, or the first arc of Cheating Detective Satori. Unfortunately due to her seclusion in-universe, her article in Perfect Memento in Strict Sense, usually a good source of how the character is seen by the residents of Gensokyo, is somewhat uninformative. 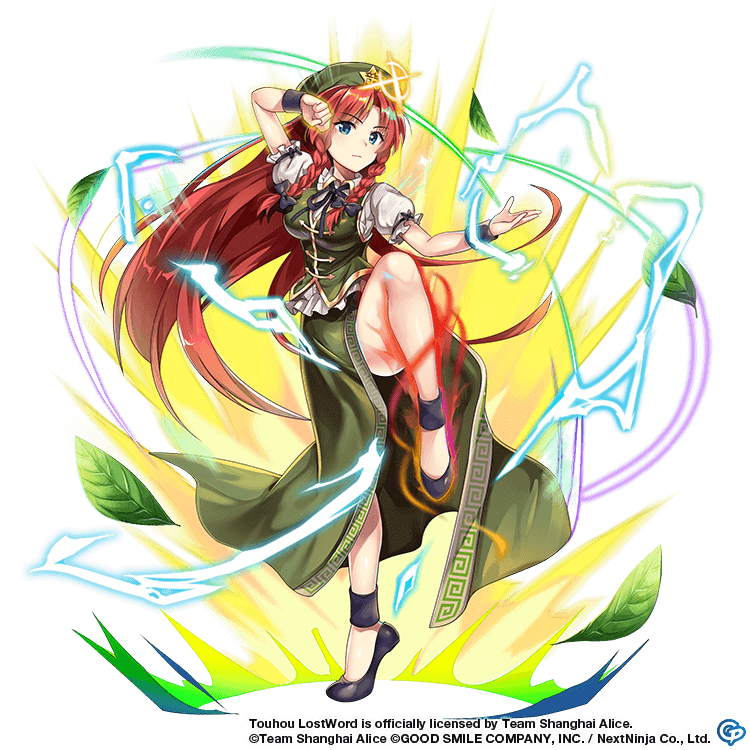 Debuted in: Embodiment of Scarlet Devil

The gatekeeper of the Scarlet Devil Mansion, Hong Meiling made her debut in Embodiment of Scarlet Devil. Being the gatekeeper, she naturally attempted to stop the heroines from entering the mansion and foiling her mistress’s plans - attempted, and failed.

A laid back individual who has a tendency to sleep on the job, Meiling is nonetheless as loyal as it gets. She’s on friendly terms with the rest of the mansion, and her appearances often revolve around either her role as the gatekeeper, or her interactions with the rest of the mansion’s residents. Meiling is also well liked in Gensokyo as a whole, and tends to be challenged by others to test their skills, contests of strength that her mistress enjoys watching to sate her boredom.

Her power is the usage of Qi. Qi can be seen as a sort of life energy, which is reflected in her heavy use of Tai chi and colorful rainbow bullets. Unusually for Touhou, Meiling’s danmaku involves her lunging at her opponent - even in the shmup games. For a good idea of what her powers enable her to do, you should check out Touhou Hisoutensoku or Shoot the Bullet - the latter of which is available on Steam.

If you want to know more about Meiling, the first arc of Cheating Detective Satori or her interview in Bohemian Archive in Japanese Red will give you a good idea of her relationships with the other residents of the Scarlet Devil Mansion, and her article in Perfect Memento in Strict Sense will give you a idea of how she’s seen in Gensokyo as a whole. Whilst Touhou Hisoutensoku will give you an idea of her combat style, unfortunately she is portrayed as a joke character in that game, making it a poor introduction to her character - although her versus mode win quotes against the Scarlet Devil Mansion residents sheds some additional light on her character.

[JP] Fate/Apocrypha Blu-Ray Disc Box and Original Soundtrack Release Campaign
Campaign to run from October 27th to November 4th and commemorates the release of the…
Mysterious Heroine X is the Artoria Pendragon of the Serventverse Right?
Also how does she travel between the 2 Universes? To top that off why does she hate…
Munenori vs Lancelot
Disclaimer: I have both Munenori and Lancelot and love using both of them. This is…
Busti's Stall Diary Chapter #406: Writer's Club Assemble!
Is the pen mightier than the sword? Debatable. And guess which one’s better at the…
Banner results worth?
(Sorry for my bad english) l recently spend all my sq in spishitar banner (524sq+35t),…
Read More