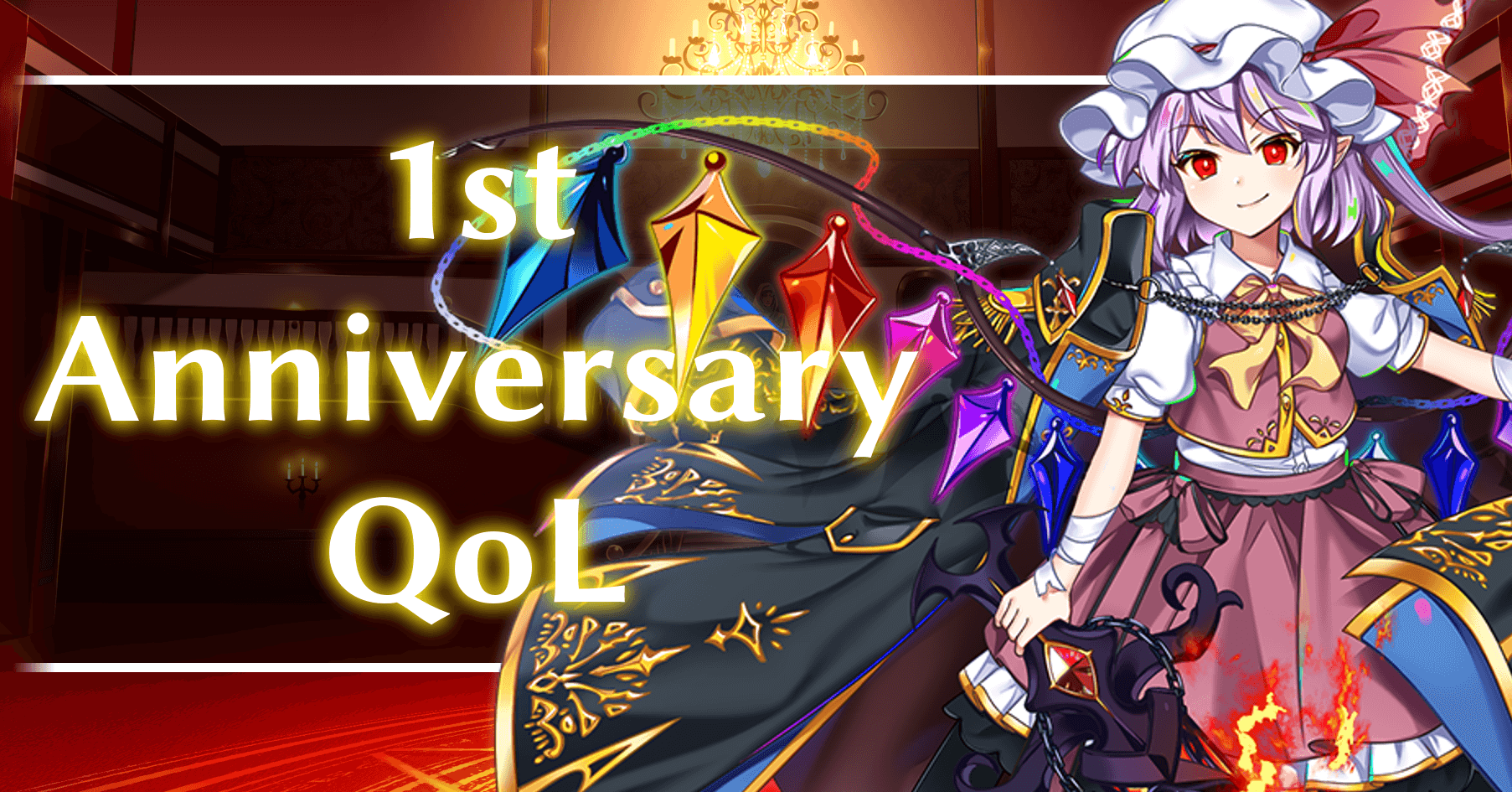 For the maintenance symbolizing the 1st Anniversary of Touhou LostWord Global, there are going to be a good few updates regarding quality of life as well as how some menus appear in-game. Before you panic over how new everything looks, let’s take a quick look at everything that will change after maintenance on May 11th! 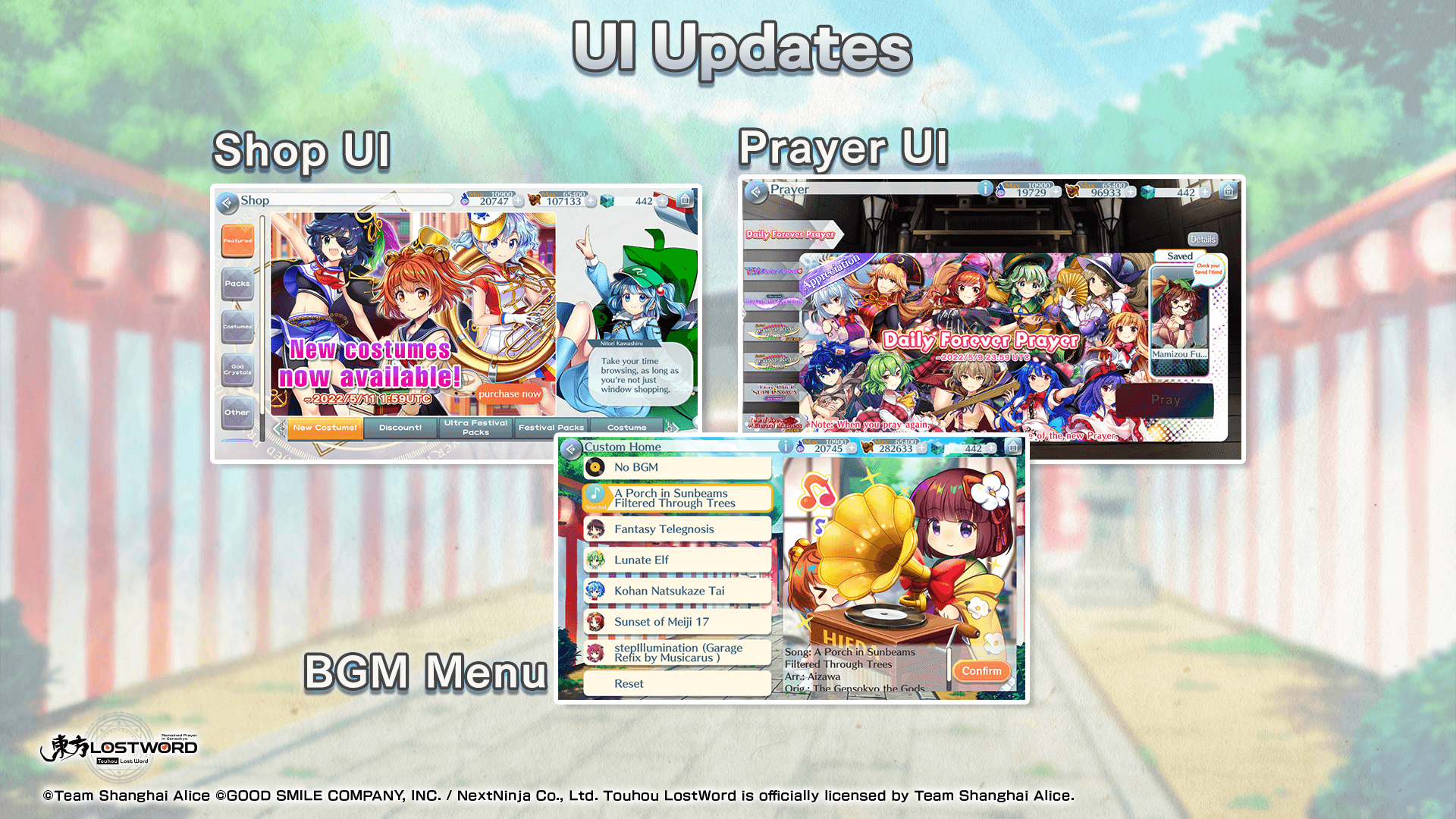 First up are a couple of UI updates (that stands for User Interface, for those who had to look it up just now like me) that are meant to make the menus more approachable. The three main ones will be for the Shop UI, Prayer UI, and BGM Menu. Here is a quick rundown of all three of them:

The Shop UI is rather basic, moving the categories of purchasable items from a scroll-able bottom of the screen to the left of the screen. Additionally, specific subcategories of special items detailing event packs, discounts, and more can be found in the Featured section of the store! The button moving from the Shop to Exchange Shop is still in the bottom left, although you may need to scroll down based on the current events.

Now this is a rather big, yet simple change. Just like the Shop UI, the method of switching between categories has been moved from the bottom of the screen to the left side. This is a huge relief for the Prayer menu specifically, since it will be a lot easier to scroll through the many new prayers and special deals, such as Step-UP or Prayer Events! Plus, you can see all of the nice Prayer art on the tabs!

This last one is less of a major menu overhaul, but still has the same spirit as one. Images of Friends will appear next to a BGM that relates to their own theme. Additionally, the BGMs have been sorted in a much more logical manner. Put simply, Music Videos (or MVs) are first, then Friend themes based on their mainline Touhou Project release order (if you are confused, it is the same order they have in the Journal!), and finally music used for story cutscenes.

An example of the BGM Menu update via LostWord JP. After characters from the mainline games comes Friends from print works, such as Toyohime and Kasen!

This specific UI change gets its own section due to how big of a factor it is. Not only are special icons given to each special effect on a shot or spell, but checking the information of these attacks in-game now gives a lot more information! For instance, if an attack has Hard scaling, the game will inform you on what % of the defense stat is used to boost the bullet line in question. The same applies for the chances of specific secondary effects occurring, such as Yang ATK buffs on self or Yang DEF debuffs on opponents. 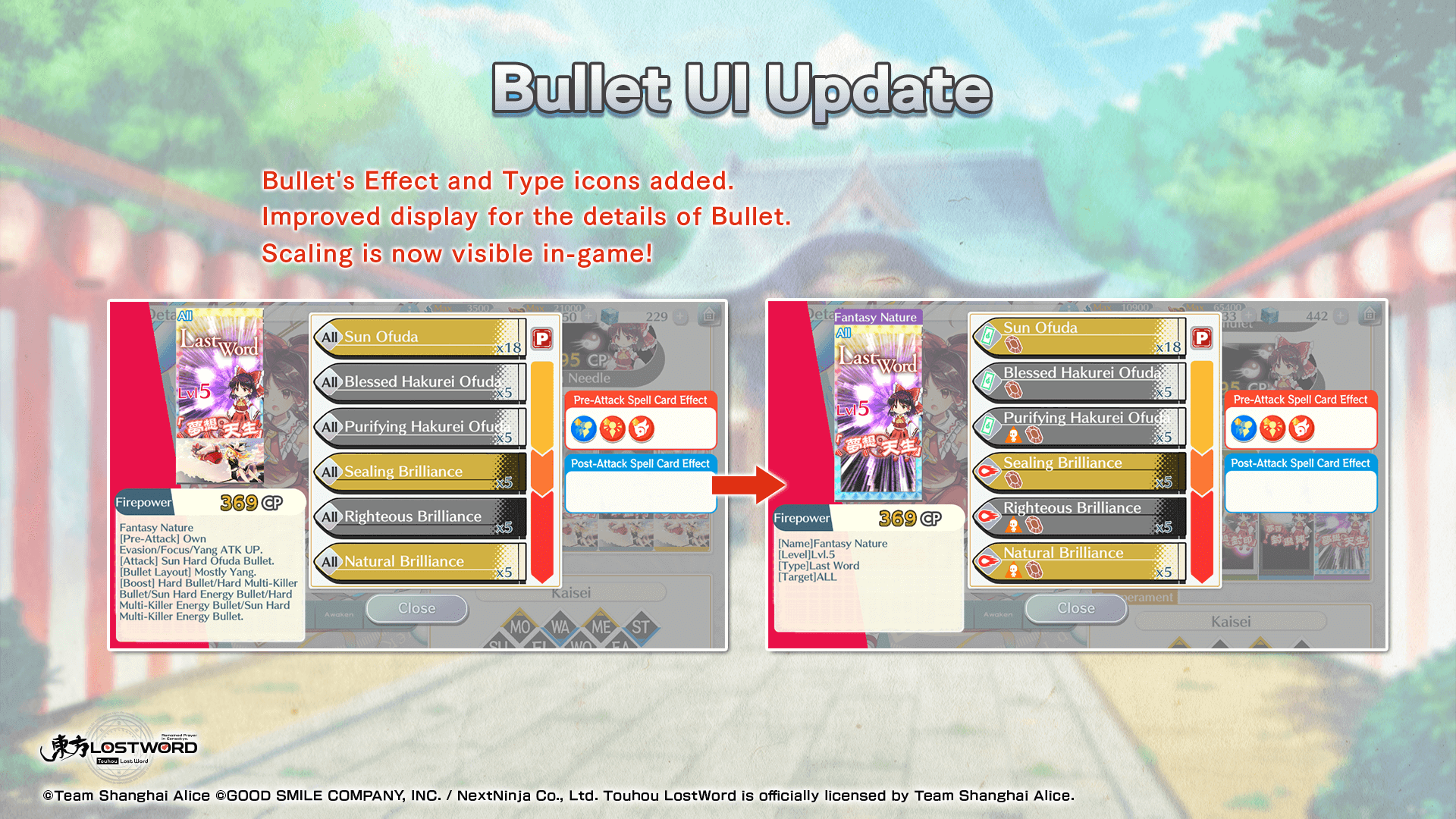 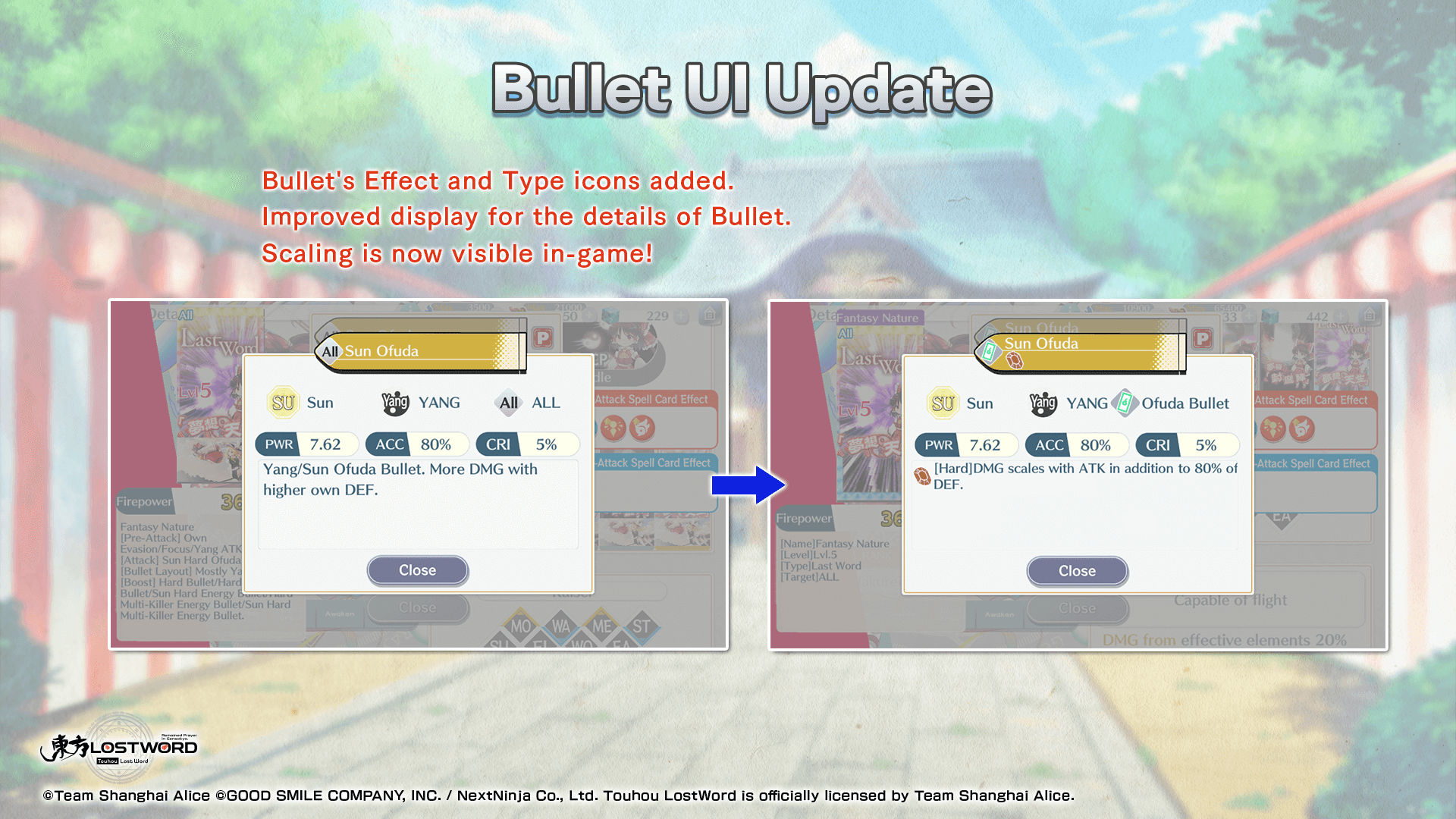 Click on a bullet line in-game via a Friend's attack menu to learn about their secondary effects!

Last but certainly not least is quality of life surrounding how Burst Gauges work. Beforehand, this element of challenging content could be rather annoying, as when using Full Auto, Friends would unleash all of their Last Words despite running out of spells to use after the opponent runs out of their initial gauge. After the next update, this will not be the case! Friends will prioritize using their spell cards from left to right until an opponent’s HP Gauges are no more. From there, they act as normal and unleash their Last Word. This should make Full Auto-ing content involving these tougher enemies a lot more convenient. 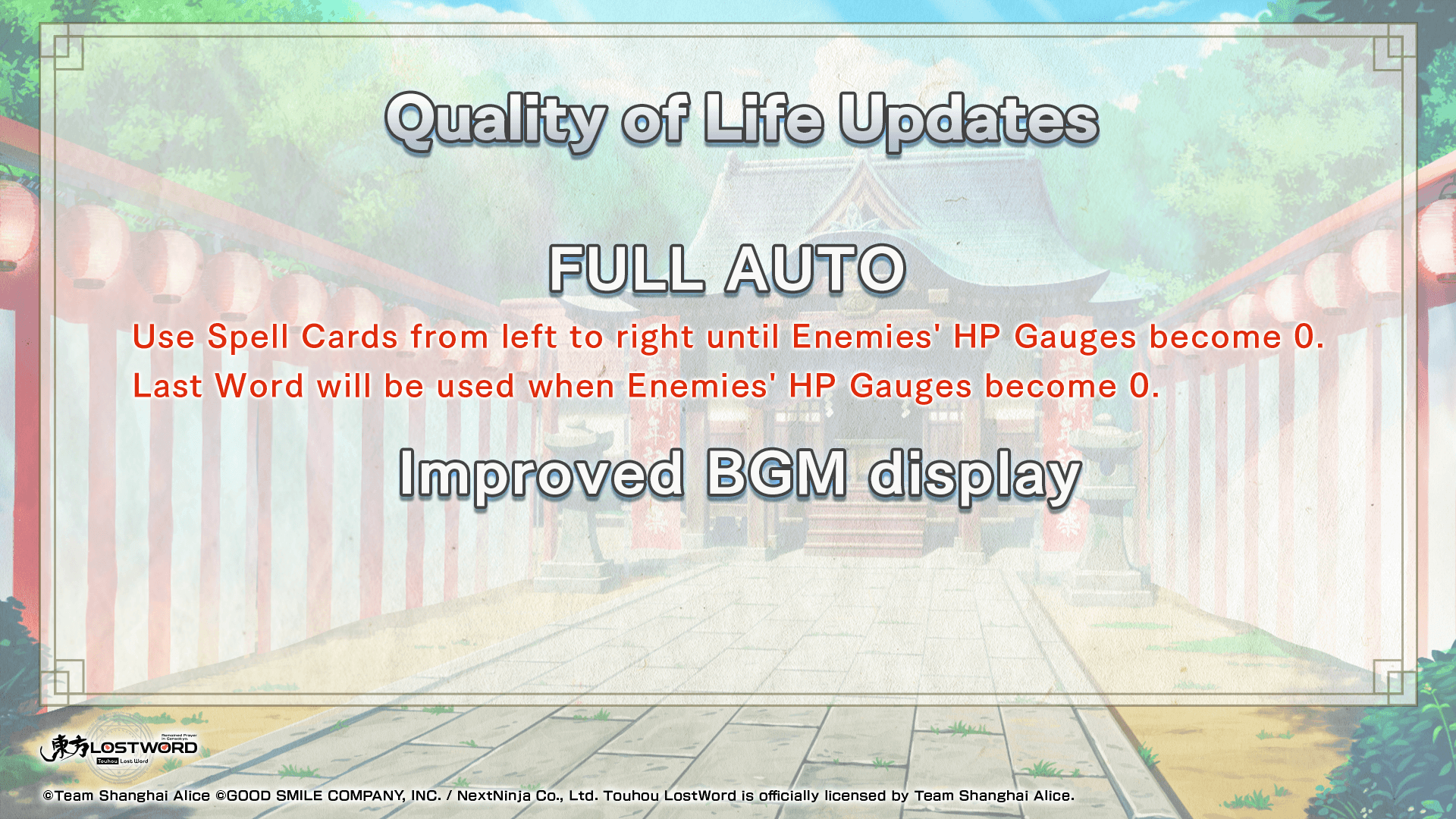 Furthermore, Burst Gauge opponents will often unleash a bonus attack upon bursting one of their gauges. However, if you’re like me and play with x2 speed, you can sometimes barely see what they even did in the first place! Not only will there be an icon to indicate a foe’s current HP Gauge count, but their Extra Attack data can now be seen in-game! Now you can properly prepare for these counter-attacks before they mess you up in one of your runs! 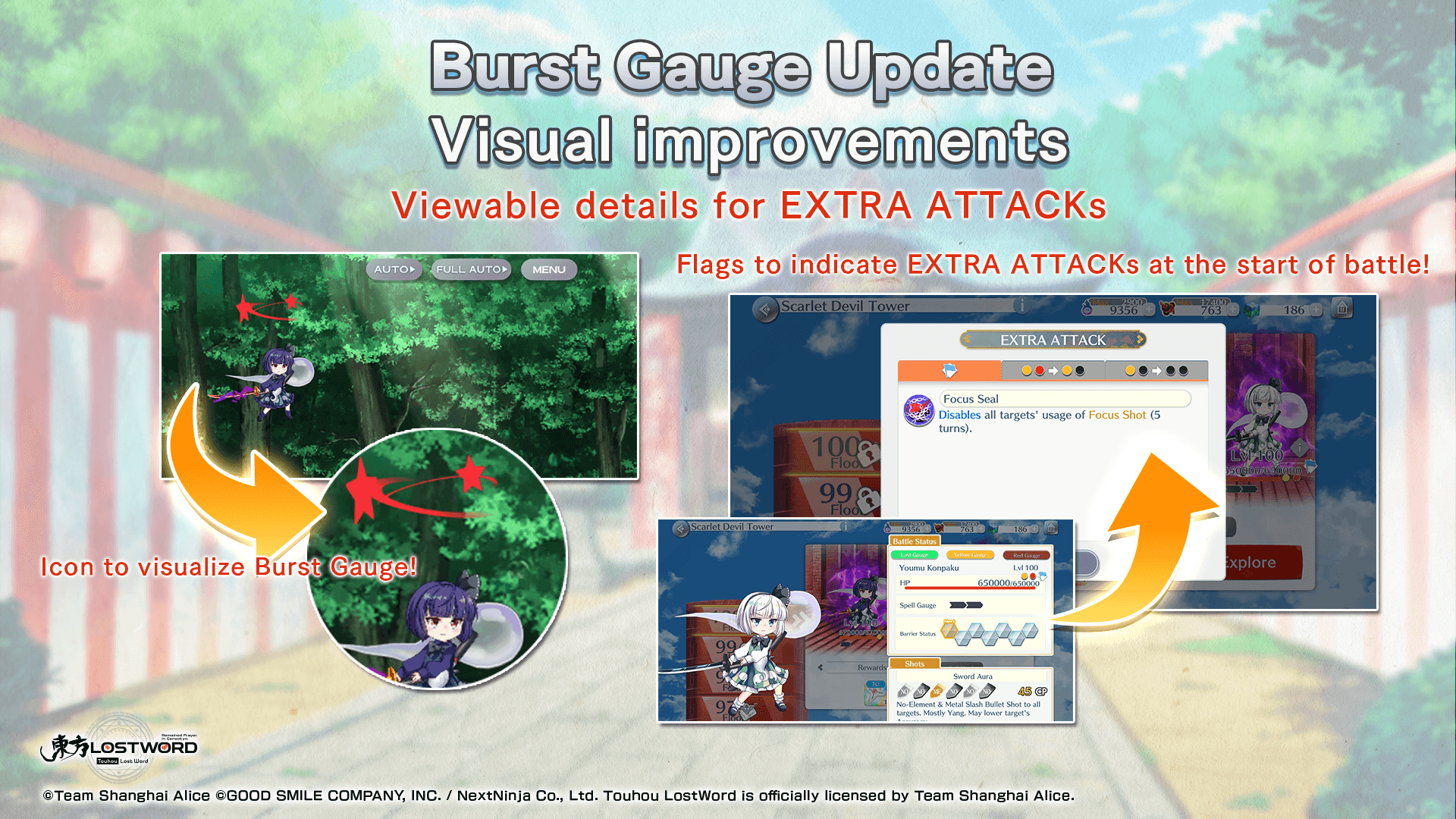