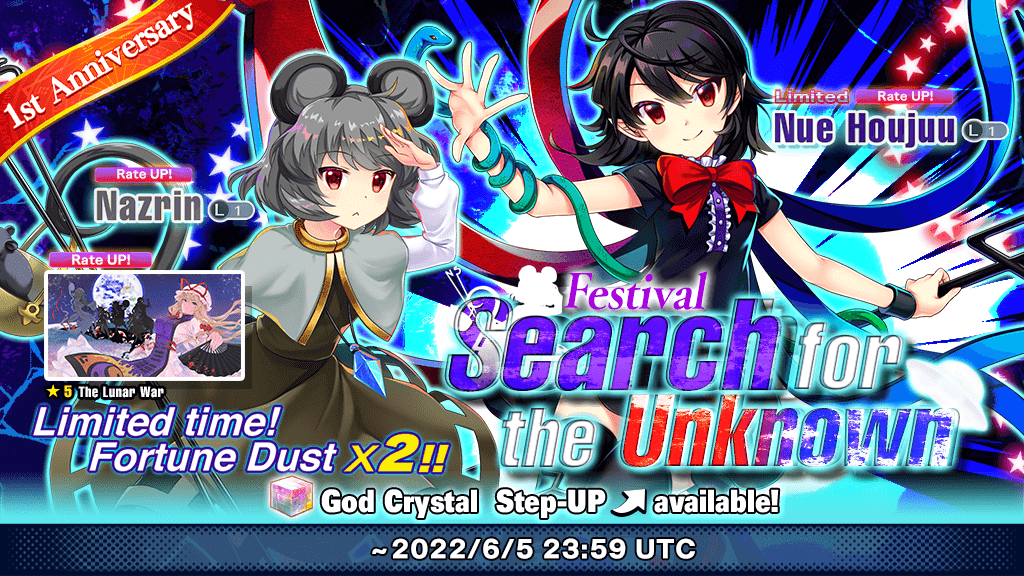 Probably. Not only is Nue a high quality Friend (as you'd generally expect from a new Festival Friend) but Nazrin, despite being a standard pool Friend, is also really very good.

Nue is an excellent Yin attacker that also provides ACC and Yin ATK teamwide with her skills, making her not only a great Yin nuker in her own right but a great fit into a Yin oriented team. Nue also has a similar ability to Hecatia or Iku where she gains bonuses from and is immune to the negative effects of being inflicted with barrier anomalies, except Nue isn't just immune to one; she's immune to Burn, Freeze and Darkness, and also inflicts all of them on herself through skills.

Nazrin isn't an attacker but is instead a Support-type Friend, and a great one at that; she provides tons of good Yang-oriented support, Speed, ACC and even teamwide Spirit P up. But despite being a support, her own damage is pretty good too, and she boasts a lot of metal and water attacks throughout her Shots and Spell Cards.

Along with the Friends is the new 5* Story Card, The Lunar War. It's not bad - serving as your general Accuracy support card with some defensive stat sticks but not much else - but nothing to prioritize the prayer for. The Friends are definitely the focus here.

Seeing as we are still in Anniversary month, albeit the tail end of it, there is still quite a bit of competition with this banner just due to the sheer amount of banners right now. Still running alongside Nue and Nazrin are B5 Reisen Udongein Inaba, R8 Youmu Konpaku, and B3 Watatsuki no Yorihime, so if you're still trying for any of those you might not have the crystals to spare. But if you're not interested in those three, this Prayer is pretty above average in terms of Friend quality. But above going all-in on the Prayer with Seal Crystals, there's really no good reason to not do the first Ascending God Crystal Step-UP step, which costs 60 God Crystals, as it's just so cheap and guarantees a Friend. 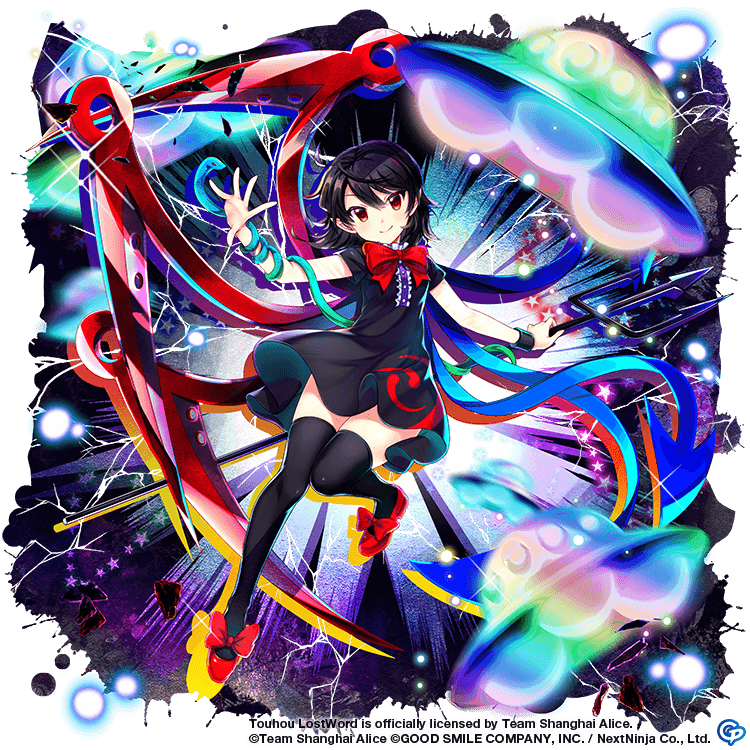 + 0P Water Spread Shot
+ 0P Fire Focus Shot
+ Tons of element access overall, almost as much and as varied as A7 Yukari
+ Lots of Yin ATK up and ACC up for herself and also her team
+ Immune to Burn, Freeze and Darkness and gains Spirit P for being inflicted with them 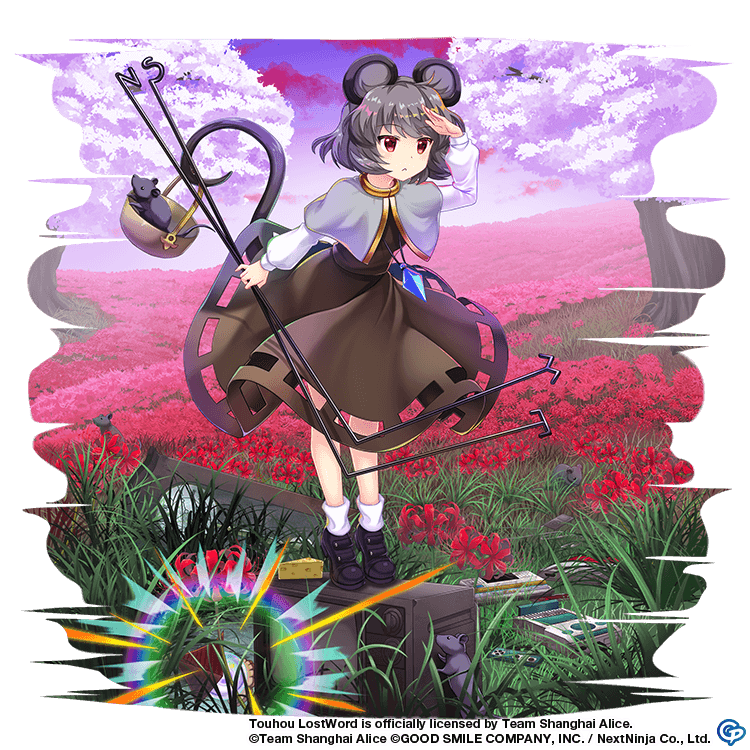 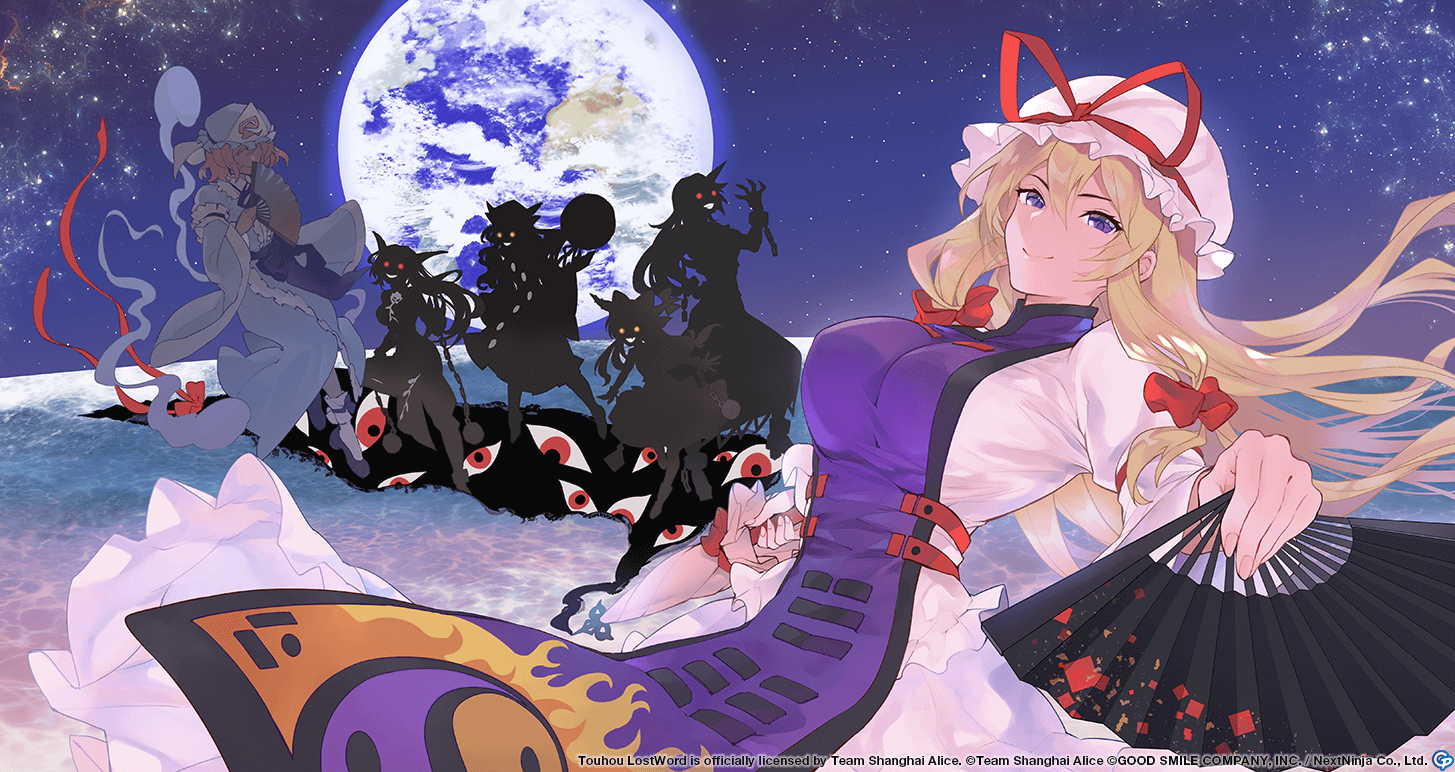 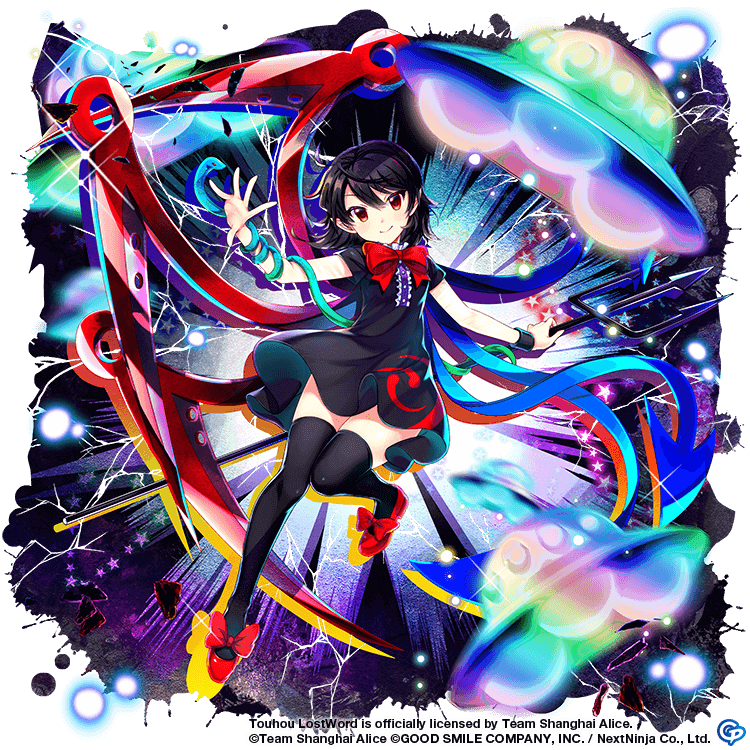 Nue Houjuu is a mysterious and mischievous Youkai who, like Kogasa Tatara, loves scaring people and playing pranks. Even among Youkai, Nue is something of an outsider; she isn't particularly friendly with most of Gensokyo due to being sealed underground for a long time. However, Nue does have some kind of relationship with Mamizou Futatsuiwa, as she contacted her from the Outside World to tell her of Gensokyo and lead her there. After secretly assisting Reimu, Marisa and Sanae with Byakuren Hijiri's resurrection, Byakuren took her in at Myouren Temple after the events of Touhou 12: Unidentified Fantastic Object. Her ability, to conceal "true forms", allows her to modify the appearance of herself and objects at will, in such a way that the modified appearances look completely different based on who is viewing them.

Like most of her kit, Nue's Spread Shot, Indefinite Sasarindou, is very solid. it's single target, with Water at 0P, which is good regardless, then she gets 1 star at 2P and 1 more water at 3P. It also has Yin ATK UP (100%) at 0P and 2P, making for an easy and consistent way to keep her Yin ATK rising in prolonged fights. Her Focus Shot, Unknown Swallowtail Butterfly, isn't half bad either, being single target with sure-hit and Fire at 0P, with 1 more Fire and 1 Star at 2P. It also has some self Speed UP at 1P, which is an easy way to raise her speed and take advantage of her high Slicing scaling on her Spell Card 2 and Last Word.

Nue's Spell Cards are fully elemental, and mostly split into 3 types: Star, Water and Fire. Nue's Spell Card 1, Nue Sign: Danmaku Chimera, is AoE, with 3 Water and 3 Star bullet lines. The bullet lines themselves really don't have many bells or whistles, but the Pre-Atk effect is quite good, with all ally Speed 2 levels UP (2T) and self inflicts 3 layers of Darkness, which in conjunction with her passive skill effectively means it gives her 0.60P upon use. Nue's Spell Card 2, Nightmare of Heiankyou, is ST, with 3 Fire and 3 Star bullet lines. This Spell Card's bullet lines have a bit more to them, with a good bit of Slicing scaling throughout, a lot more Killers, and some target Yin DEF down. Its Pre-Atk effect is pretty good too, with ACC 2 levels UP (2T) and inflicting 3 layers of Burn to target (2T). Then, her Last Word, Who Goes There?, capitalizes on the Pre-Atk effects of her previous Spell Cards, with lots of Slicing scaling, and inflicting AoE evasion 2 levels DOWN (3T), which when paired with the ACC granted by her Spell Card 2 and Skill, makes this a near sure-hit, plus it also inflicts AoE 2 layers of Darkness (3T) to boot.

Nue's main interesting Skill is her passive, which has already been discussed due to its synergy with her Spell Cards; she gains 0.20P for each layer of Burn, Freeze and Darkness and is immune to the negative effects of them. This allows her to gain Spirit P in an uncommon way through either putting her against enemies who will attempt to inflict barrier statuses on her which would actually help her, or to synergize with Friends who inflict barrier statuses to their teammates. All of Nue's Skills inflict 3 layers of a barrier status to herself as a result, which ends up giving her an additional 0.60P per skill. But interestingly, her Skill 3, Unidentified Seed, inflicts Darkness not just to herself, but to the entire team, which provides some interesting synergies with Friends such as Rumia. However, this can naturally be detrimental for many other teammates, so be careful when using Skill 3. But outside of the barrier anomalies, Nue's Skills are quite simple and straightforward; Skill 1, Abyssal Water, provides party ACC 2 levels UP (3T), Skill 2, Fire in the Sky, grants Yin ATK 2 levels UP (3T), and Skill 3 provides party Yin ATK 2 levels UP (2T).

Overall, Nue is a very unique and high damage Yin attacker that also does a good bit of Yin and ACC-based supporting through her Spell Cards and Skills, while also being immune to over half of the barrier anomalies. 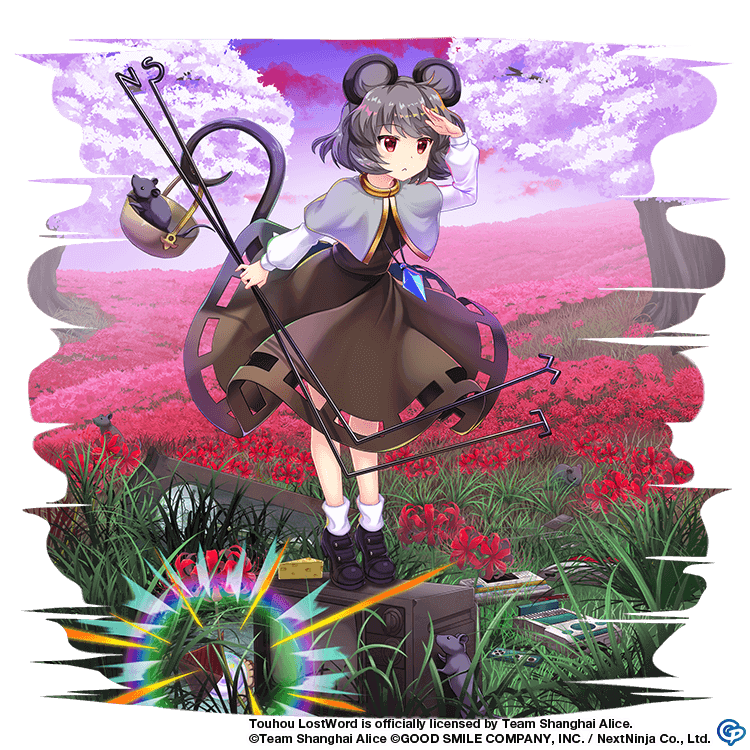 Nazrin is a mouse Youkai who leads a large band of mice, which she commands deftly to find lost items or just pick up generally interesting things. She is a straightforward talker with a sizable ego, yet a bit timid if truly scared or confronted. Her ability, expert dowsing, is often used for her own gain or for the gain of her fellow Buddhists at Myouren Temple, but will help others find lost items in some circumstances. In the events of Touhou 12: Unidentified Fantastic Object, Nazrin is tasked by Shou Toramaru to find the Pagoda of Bishamonten, as it was needed to revive Byakuren Hijiri, and she was successful. She spends most of her time searching for various treasures and looking after Shou.

Nazrin's Spread Shot, Dowsing Rods, is impressively good, and would still be even if she was a Festival Friend; it has Water, Slicing scaling AND self speed UP (100%) at 0P, and incredibly efficient Spirit P generation on hit, not to mention that it has Yang ATK UP (100%) at 1P and 1 more Water and 1 Metal bullet line at 2P. Her Focus Shot, Dowsing Pendulum, is less impressive, being traitless at 0P, although it does have some more Slicing and sure-hit, and gains 1 Metal at 1P, 1 Water at 2P, and 1 more Metal at 3P.

Nazrin is a Support type Friend, and her Spell Cards make it very evident. Her Spell Card 1, Rod Sign: Busy Rod, is AoE, and provides the party with 0.70 Spirit P UP, which is already an excellent effect; but besides that, it's got a sizable bit of Slicing scaling, surprisingly good Killers and 2 Water and 2 Metal bullet lines. Her Spell Card 2, Vision Sign: Nazrin Pendulum, is fully elemental, with 4 Water and 2 Metal bullet lines, more Slicing, about the same Killers as Spell Card 1, and 2 different self Yang DEF UP (100%) at 1P and 2P respectively. The Pre-Atk effect provides the party with ACC 2.5 levels UP (2T) and self Evasion 2.5 levels UP (3T). Then, finally, her Last Word, Harvest of the Mice,  is also fully elemental, with 4 Metal and 2 Water bullet lines, even more Slicing, with even a little bit of Hard scaling as well, synergizing with the Yang DEF UP in her Spell Card 2. Her Last Word also notably has sure-hit on lines 1 and 2, which is rare for a Last Word; not having to worry about accuracy is very helpful, especially since those 2 lines are where most of the Slicing scaling are.

Skills tend to be the most impressive part of Support type Friends, and Nazrin is no exception. So much party-wide boosting with a leaning towards Yang that she can be easily slotted into a lot of teams. Her Skill 1, Bishamonten Backup, provides self Spirit P 0.70 UP and party's Speed 3 levels UP (2T), which synergizes well with her own Slicing scalings as well as potentially with teammates. Her Skill 2, Assistant Mouse, provides party wide ACC 3 levels UP (2T) as well as Quick to self, which is good, because Nazrin often wants to go first to apply her teammates with her teamwide Pre-Atk buffs from her Spell Cards so that the teammates can benefit from them by moving afterward. Her Skill 3, Rarity Appraisal, is truly exceptional; it provides party wide Spirit P 0.70 UP as well as party wide Yang ATK 2 levels UP (2T). Party wide Spirit P UP is such an exceptional and rare skill that few have, let alone 0.70P at once; coupled with her Spell Card 1, which also does the same thing, it's shockingly easy to get the whole team to 3+ P in 1 or 2 turns.

Nazrin truly does play and feel like a Support type Friend of the future, with a large array of valuable buffs, including an impressively high amount of team Spirit P generation, making her possibly one of the most valuable standard pool Friends out there.