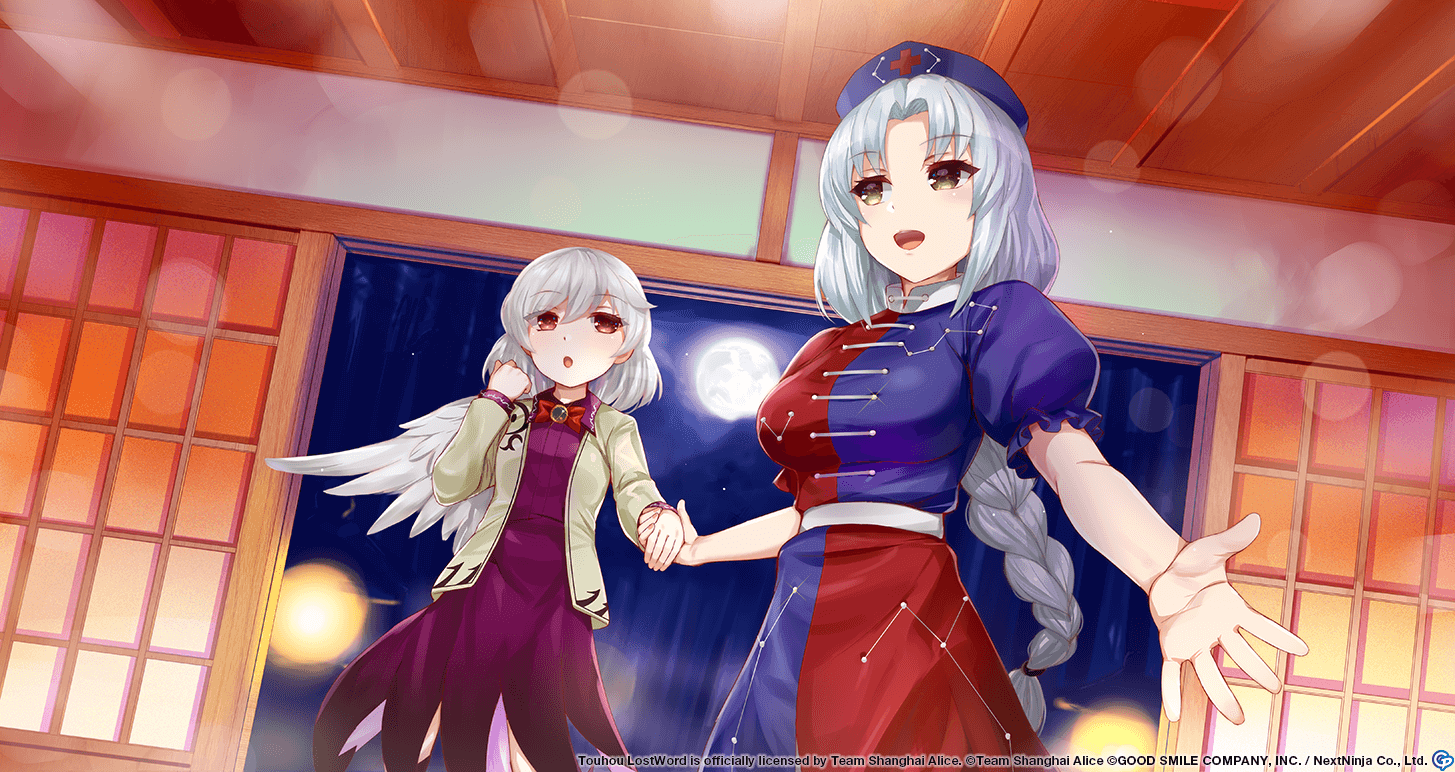 Story 1
Eirin Yagokoro is the brain of the moon and a genius. She currently lives together with Kaguya in Gensokyo and makes all sorts of medicines. It's said that she will treat anyone who visits Eientei, be they human or youkai.
Story 2
Sagume Kishin is one of the Lunar Sages. She hardly ever speaks due to her powerful ability to reverse a situation with her words. When she speaks about an event or situation, that situation will proceed to reverse itself. In the world of Touhou LostWord, she communicates with a text-to-speech message board or with writing.
Story 3
A congress is an assembly of one or more people for consultation or discussion. Sagume has great respect for her fellow Lunar Sage Eirin, so she went down to the Earth to seek her advice.
Story 4
Lunarians say that the Earth is covered in impurities, but they still hold much respect for Eirin, who descended down there. There have also been many reports of Lunarians seeing Sagume and the Watatsuki sisters traveling down to visit Gensokyo. Maybe this will lead to the Lunarians overcoming their distaste of impurities one day...
Story 5
In a past incident, Sagume planned to purge Gensokyo of all humans and youkai and then move the Lunar Capital down there. Eirin first tasked Reisen to deal with it, but she even asked Reimu for help when she realized Sagume's plan. Was the incident that dire, or did Eirin just want to make sure Reisen succeeded because she was worried about Sagume and the Lunarians? Only Eirin herself knows for sure...

Memories of the Lunar Sea Mystic Code skill rate oddity
So while leveling up this Mystic Code Ive noticed that its third skill ‘Punishment’…
Busti's Stall Diary Chapter #518 : Yes I am Your Maid But You Have to Serve Me
Source Source Source Source Source 1168 posts - 45 participants …
On the game's old files
My phone was acting up, so I was clearing up some space. As I was, I looked and saw…
Regarding SE.RA.PH. quests availability after the event
Once the current event ends, I get that the main interlude quests will be added to the…
Is np1 fran a good aoe ? Answer needed asap. Thanks
On my alt, I have a lv70 spartacus, and lv80 maou for my neutral farming, but maou…
Read More