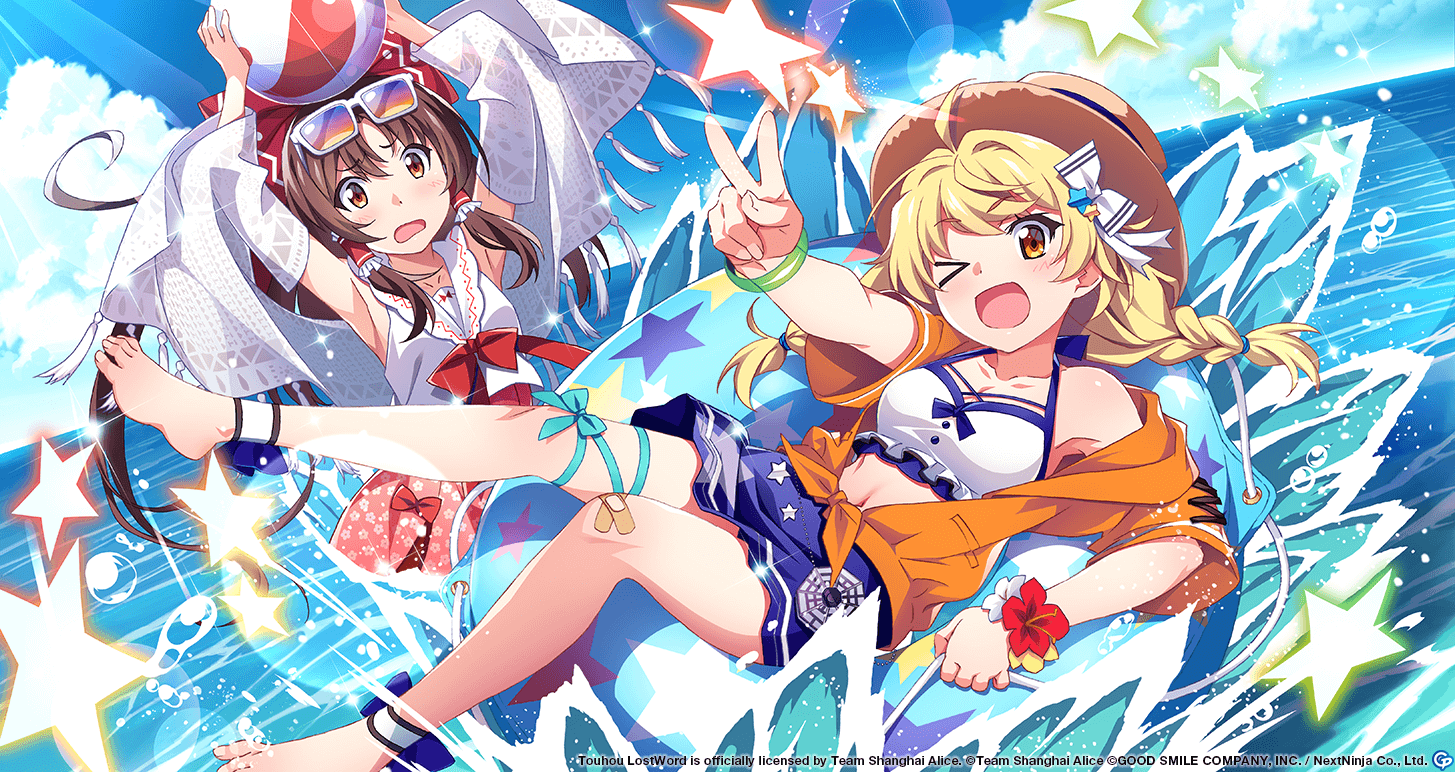 Story 1
A journal entry by someone. It's summer! That means it's beach time! Tropical islands time! An actual sea is finally here in Gensokyo! Isn't that awesome, Reimu?! Isn't it cool, Marisa?! Paradise actually exists! ...Like that would ever happen! Reimu Hakurei is a shrine maiden of the sea―a Sea Shrine Maiden. Of course, Gensokyo isn't supposed to have a sea, but almost all the Reimus in the other worlds know about the existence of a sea. But that's the sea on the moon. The Reimu of this world is the strongest when it comes to any of the water sports. Marisa Kirisame is a magician of the sea―a Sea Magician. She's kind of a simpleton who will jump for joy at the sight of star sand. Just like Reimu, almost all the Marisas in the other worlds know about the existence of a sea. They once admired the sea on the moon together. They felt like they were drifting away. She enjoys nothing more than playing with Reimu.
Story 2
Gensokyo is underwater! Who would've thought that everything could end like this? Global warming is scary... It may sound like a joke, but there's a theory that global warming, which is essentially a very long period of warm climate, is the reason why the Gensokyo of this world has almost completely submerged. Earth is the kind of place that is said to cycle between having a warm climate and a freezing cold climate that both last a very long time. The well-known ice age is one such example of a long period of cold climate. When the Earth goes through a long period of warm climate, the seawater expands due to heat, causing the sea level to rise. The main reason for the rise in water level is not the melting of polar ice. It is actually the thermal expansion of seawater. It is known that anything that does not possess a will can easily pass through the barrier that surrounds Gensokyo. That also includes seawater.
Story 3
But isn't that strange? If only seawater could pass through the barrier, why is there life inside the sea? Oh, so basically, the sea was like this before Gensokyo's barrier was created. I thought the sea level had risen after the barrier was formed. But it probably happened the other way round. OK, now it makes sense.
Story 4
No, it still doesn't make any sense. This doesn't explain the remnants of Gensokyo that can be found at the bottom of the sea. It's like a settlement drowned in a reservoir. Doesn't that prove that there has been a drastic increase in the sea level only recently? Wouldn't this mean that a large amount of water flowed in after the barrier was formed? But the barrier doesn't allow living things to pass through it. So does that mean Gensokyo already had a sea, but the water level was low? But... if we go with that theory, it doesn't explain why the sea's ecosystem is thriving like a tropical coral reef. Wouldn't that take a lot of time to form? Gah, this is bad. It's full of inconsistencies.
Story 5
Forget about all that, and let's play together! Thinking about it is driving me nuts. Reimu and Marisa are having fun without a care in the world. Now, if I don't go have fun with them in this swimsuit that Mister Rinnosuke made for me, I'll feel like I'm missing out. Yes, that's what I'll do! Mister Rinnosuke made this especially for me after all! It was quite a struggle to gather the materials for it, but I finally managed to get them. I'm sure the others will also be able to gather the materials and get their own swimsuit made too. Then we can all play together. Swimsuits are truly a revolutionary invention. It's pretty comfortable to move in them even if you get wet. And they also dry really quickly. Who came up with them? ―Excerpt from the record left behind by ■■■.