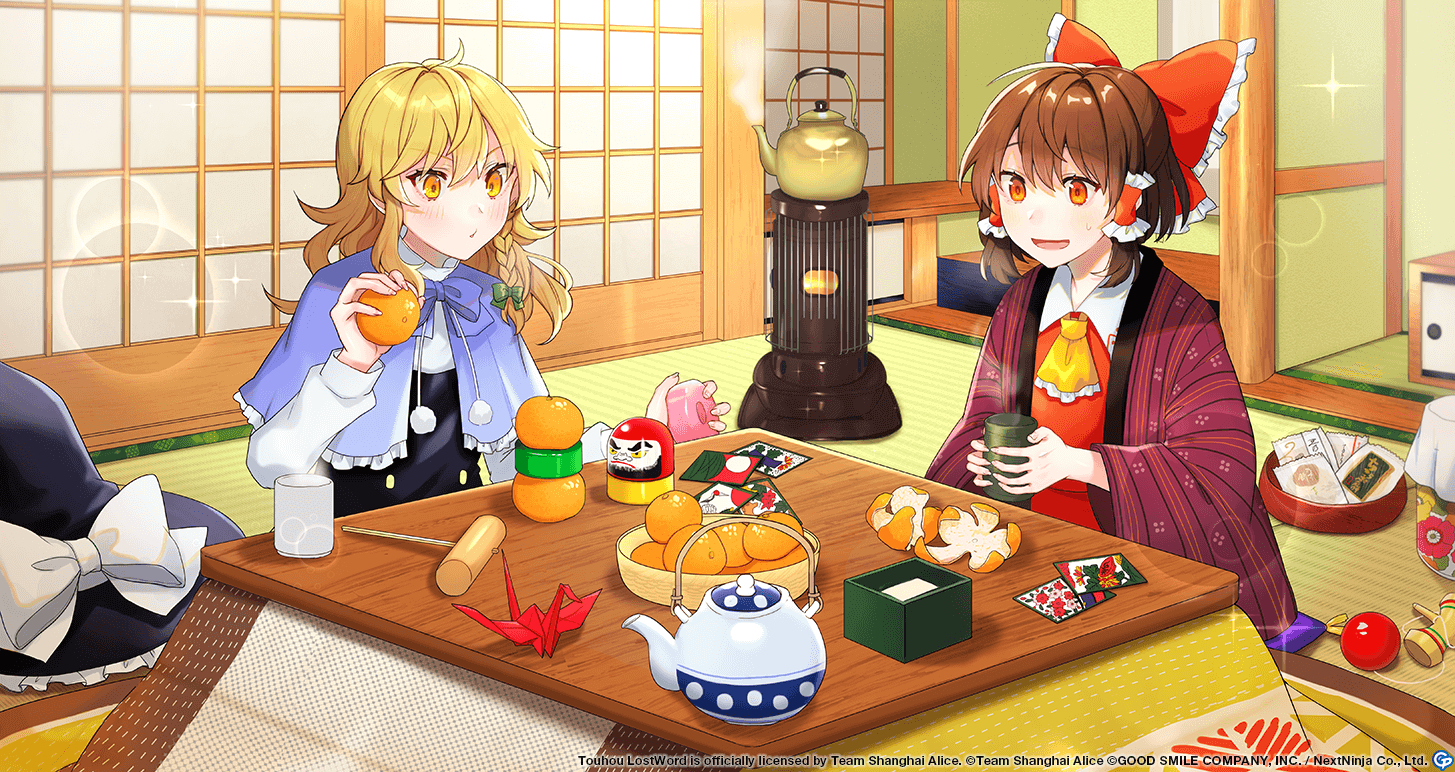 Story 1
Reimu Hakurei is the Hakurei shrine maiden. She loves some hot green tea in the chilly winter. Satisfied with how many visitors came to the shrine for New Year's Day, she warmed up in her heated kotatsu table and enjoyed a nice hot cup of green tea... How did you spend the New Year?
Story 2
Marisa Kirisame is an ordinary magician who loves her mini hakkero, but loves heating up in a kotatsu even more. There were so many visitors to the shrine this year that she was made to help out along with Aunn. Nothing beats warming up in a kotatsu and eating mandarins after a hard day's work. How many mandarins did you eat on New Year's?
Story 3
The Japanese word kotatsu is now usually written in hiragana, but it used to be written with three separate kanji characters. There is a theory that the second character "to" (also read as "shiji") was chosen because the scaffold of the kotatsu looked similar to a stool used to get in and out of a cow-drawn cart. The other kanji characters commonly used to write the word kotatsu now were made popular by the Zen priests in the Muromachi period (1336-1573).
Story 4
While warming up in the kotatsu and eating mandarins, Marisa asked, "Why are kotatsu and mandarins paired together all the time?" In the winter, mandarins can be kept for two to three weeks at room temperature without going bad. They are also easy to eat as you can peel them by hand. Moreover, they're rich in vitamin C and rehydrate you when you eat them. Reimu didn't explain any of this and merely answered, "They taste good, so who cares?"
Story 5
Last year, Reimu, Marisa, and you were busy running around resolving the Lost Word incidents after the Seal Crystals appeared out of nowhere. Now it's time to warm up in the kotatsu while thinking of your hopes for the future and of a plan to gather the Seal Crystals and resolve the new Lost Word incidents. All the while being careful not to catch a cold...