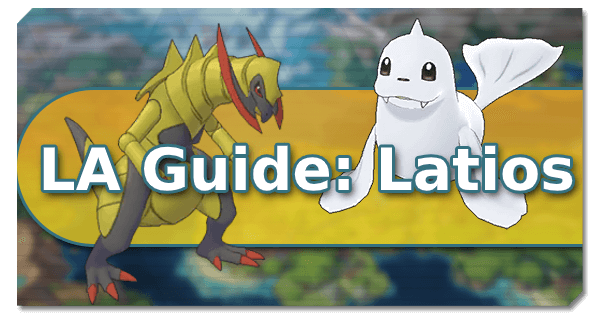 Generally considered to be one of the more disappointingly easy/refreshingly accessible Legendary Arenas to date (depending on your perspective), Latios’ goon squad and weakness change aren’t enough to save it from the power of Pokemon Masters’ many incredible offensive Dragons. Whether you’re mad or glad about the relative lack of difficulty, the Arena has never been so easy for F2P players to 3v3. However, before we get into specific comps and strategies you can follow in order to guarantee a victory, I’ll detail a few general ideas for you to incorporate into your own teams for this event.

Firstly, the introduction of side pairs adds an interesting twist to the LA formula by allowing the player to prioritize the opponent that threatens their team the most. While you should, of course, be targeting the goons first and Latios second as the damage they deal quickly piles up throughout the match, which is the more dangerous of the two? This will largely depend on your team composition, but since Dragonite is specially offensive and Salamence is physical, a good rule of thumb is to target whichever threatens your Striker’s lower defense stat. Remember: a team is only as bulky as its weakest link, and having your Striker knocked out early by aoe is the fastest way to waste a team.

Past that, Entei and Cobalion’s highly exploitable vulnerability to Sleep and Flinch returns for this Arena, allowing anyone who owns a pair like Gengar or Delphox to easily slap the entire stage in one go with proper timing. While it does take a good deal of practice to really nail down the infinite sleep playstyle, it can be highly rewarding across formats and especially in the Legendary Arena.

This is likely the easiest way to clear the Latios Arena for most players. Being based on powerful free pairs most players have invested in, independent of any difficult-to-learn gimmicks like Sleep or Flinch chaining, and having the potential to luck out of mistakes through Potion Mp Refresh, any beginner with a good amount of Sync Orbs can ride these comps to victory. The strategy as a whole is quite simple (hit the big dragons with the big moves till they fall over), so I’ll get straight into the teams themselves.

Piloting this team is quite a simple affair, and you won’t really need to think about it too much past the standard buff>buff>attack sequencing most players default to (as well as prioritizing Salamence over Dragonite and both over Latios). With Swanna as the main tank and Starmie backing it up with “Catch Us If You Can!”, you’ll have all the healing you need as long as Swanna keeps hitting that Gust. Combining that with X Sp.Def and Haxorus’ sheer power, this team is all but guaranteed to get you to Latios’ third health bar if it doesn’t outright 3v3. In terms of builds, Haxorus’s standard damage setup with Move Gauge Refresh, Lessen Confusion 9, and Confusion Boon works wonders in combination with the defensive power of Starmie and Swanna’s Grids. More specifically, Mp Refresh on Potion, X.Spdef, and “Catch Us If You Can” along with Swanna’s Master Healer make an excellent core to build those pairs around.

This backup team is designed to come in on a weakened Latios in the case that you can’t quite 3v3 with the main squad and then quickly finish it off. Meowstic is here is put up Paralysis and then heal itself with “Not Done Yet!” while Onix spams its one bar, tanks damage, and keeps the team healthy with Potion Mp Refresh. To these ends, nodes like Thunder Wave/Psybeam/Rock Throw MG refresh work wonders in combination with the Potion and “Not Done Yet!” related skills in creating a solid vessel for Dewgong’s damage. When it comes to Dewgong itself’s Grid, Hostile Environment combined with Freeze Synergy and as many Ice Beam Power and Refresh nodes as possible is what the core of any Latios LA setup should look like.

This strategy centers around Houndoom’s ability to take advantage of debuffs and status through powerful Skills like Dirty Fighting and Overpower while Crobat contributes devastating Sync Moves. The first team aims only to survive as long as possible while spreading poison and applying debuffs. This sets the second team up to start dealing immense damage as soon as it hits the field, with Overpower and Venoshock’s buffs already being active. The great deal of damage dealt by  Houndoom and Crobat is generally more than enough to finish the Arena on its own, but when bad luck or suboptimal builds can’t be avoided the Dewgong team from the first strategy makes just as good a finisher for this set up as well.

The Strategy overview said it all with this one: stay on the field as long as possible, and apply as many debuffs as possible. Seviper and Masquerain contribute a good amount of bulk to the team, and since the former only needs to spread Poison two to three times before expiring it acts as a solid meat shield for the rest of the team. Not much else to say; Poison both side pairs, Struggle Bug/Mud Slap as many times as possible, and then die for the cause.

Once your debuffs are set up, it’s time to go nuts with Houndoom’s huge Dark Pulses and Crobat’s devastating Sync Moves. All three opposing pairs should already have been poisoned by Lucy at the outset of the match, so you’re good to immediately buff up and then break through with Venoshocks and Dark Pulses (targeting Dragonite first, as Swanna can only boost Defense on the physical side). After Houndoom uses the first Sync Move to Mega Evolve, Crobat should be taking every opportunity to throw out devastating Modern Ninja Sludge Bombs. These Sync Moves will utterly destroy Poisoned foes when used in tandem with certain Grid Skills, which I’ll of course be listing here along with the other pair’s builds.

“Move Like A Shadow!” and its associated Mp Refresh provide Crobat a great deal of Evasion, which in turn works with Blind Spot and the player’s pick of Mind Games, Slippery Sidekicks, Toxic Power, and however many Venoshock +Power nodes you see fit to deal disgusting amount of damage. The other two pairs have comparatively simple Grids, with a standard Support Swanna (Potion related nodes and Gauge Refresh) as well as any Houndoom packing Overpower and Dirty Fighting being all you need to pilot this team.

Looking for help with a different Arena, or just some inspiration from the strategies of the past? The LA Guide Index is where you wan to be!