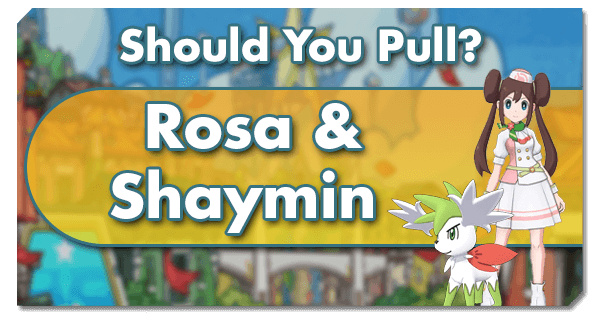 The original Five Star girl and the Mythical Pokemon Shaymin melt their opponent’s stats and go in for the kill with ever-snowballing damage.

I guess that Ash & Pikachu coming to Pasio brought a slew of new sight-seeing tourists, as we apparently needed a tourism board? And who did Lear pick to represent his glorious, artificial island? None other than Rosa, likely the first Five Star character that most of us used when we first started playing! It’s been a long time since we’ve had a focus on Rosa, and she’s making a strong comeback, going so far as to team up with the Mythical Shaymin - Sky Forme to help her show everyone around Pasio. So what does our Unovan girl and her Mythical Pokemon from Sinnoh have in store for those to give her enough gems? Let’s take a look!

Rosa & Shaymin constitute a Grass Type Tech unit with a weakness to Poison Type attacks. They have decent bulk for a Tech unit, okay Special Attack, and very high base Speed that allows them to rival some of the fastest Sync Pairs in the game to date. Starting in on Rosa & Shaymin’s moveset, we first encounter Sweet Scent. This move costs 2 bars and drops all opponents’ evasiveness by 2 stat ranks. It’s admittedly a bit lackluster, but it has the advantage of having a similar effect to an Accuracy boost for the team when used on something that doesn’t have some form of resistance to Evasiveness drops, so it definitely has its utility. Next is Potion, which adds even more team-utility to Rosa & Shaymin with the ever-classic recovery move. We follow this up with Shaymin’s signature move, Seed Flare. This is a slightly weak 4-bar move that only has 85% accuracy, but to make up for this it has 40% odds of dropping the target’s Special Defense by 2 stat ranks, making it very debilitating, potentially. Next is Rosa’s unique trainer move, Gift of Gratitude!. On use, this 1 MP move grants +4 Special Attack, +2 Accuracy, and +2 Critical Rate, while also increasing the team’s Critical Rate by 1 rank. While not outstandingly groundbreaking, it’s still a nice skill that remedies Seed Flare’s imperfect accuracy and self-buffs the Sync Pair well while adding a bit of team’s utility. Finishing off moves, Grass Beam of Gratitude is Rosa & Shaymin’s Sync Move. It’s a Tech Sync Move, so it can be boosted to 1.5x power if Rosa & Syahmin are EXed, and it has a built-in boost that pumps up its damage the more that the target’s Special Defense has been dropped, making Seed Flare all the more useful.

Passive Skills are next, and we start with the classical On a Roll 1. This skill gives Seed Flare an additional 20% chance to score its Special Defense drop, raising the odds of scoring its signature effect rises from 40% to 80% and making it much more reliable. Next is Shuddering Snarl 9, which drops the target’s Special Attack by 2 ranks when Shaymin makes a move. This not only includes the single-target Seed Flare, but the AoE Sweet Scent to inflict a Special Attack drop on the entire enemy team. Finally, Power Loving provides a boost to Shaymin’s Seed Flare that grows the more that the target’s stats have been dropped, making Shuddering Snarl 9 all the more valuable regardless of situation.

All-in-all, Rosa & Shaymin take on the role of the classic stat-debuffing Tech unit with a particular focus on the rare and valuable ability to reliably debuff Special Defense. But that’s not all, as they also have a more supportive edge to their kit thanks to their ability to buff the team’s Critical Rate and heal the team with Potion while softening up the opposition. When it all comes together, Rosa & Shaymin are generally best seen as the “finishing touch” on an already strong team, able to enrich existing strategies while providing a bit of a helping hand for the team in various ways. But that’s far from the whole story, as while Rosa & Shaymin may not be the absolute strongest, they’re still capable of dealing very nice damage with Seed Flare as its debuffs begin to snowball while also dropping powerful Sync Moves for a decisive finish. And, of course, the most important aspect to Rosa & Shaymin’s kit may be their ability to effectively melt away their opposition’s Special Defense, which is an uncommon and highly useful skill to have, as it’s a universal damage-buff for any Special Attackers that may be on the team.

But, on the other hand, Rosa & Shaymin do have at least one noteworthy flaw; they rely heavily on a 4-bar move to score their coveted Special Defense buffs and deal move damage, which can be hard for some teams to afford despite Shaymin’s high base speed. This can make their potentially universal teammate-potential for Special Attackers a bit more dubious without some Move Gauge support, though they do have ways to remedy the issue at ⅗.

With a bit of proper team building, Rosa & Shaymin can pair with most Special Attackers and provide a huge damage buff, at times seeming to emulate the damage boost of a Field Effect for types that lack such utility. Many teams will enjoy the help that Rosa & Shaymin can bring, but don’t forget that they can also take the attacker role and shine in their own right as well!

Stat drops remain between HP bars, so bringing Rosa & Shaymin in can severely cripple some stages and leave the way open for a powerful attacker to finish the job, or simply do it themselves with boosted Seed Flares and Sync Moves. Their ability to prolong the team’s time on the field with Potion is also pretty useful, as many Legendary Arena/Gauntlet stages can grind down to battles of attrition. But, unfortunately, Rosa & Shaymin also lack the gimmicks needed to be one of the go-to units for basically any stage. They’re good, but not perfect.

Rosa & Shaymin have high average performance that makes them a solid pick on most Extreme Battles. If you need a 3rd unit or some good Grass Type damage, then this is a Sync Pair that can definitely step up.

Reliance on MP for offensive power and healing combined with a high-cost attacking move can make Rosa & Shaymin a bit unwieldy, and while their ability to melt Special Attack is definitely formidable, the fact that they have to re-start the process with every opponent in multi-wave battles makes them pretty slow. Best to let them sit this one out.

⅗ is what most users might be attracted to - unlocking a Sync Nuke, increasing the debuff efficiency, and improving the gauge are very appealing, although ⅕ is still pretty usable - it might not separate itself from other debuffers in that case however, like Palentine Dawn and Champion Iris.

If you plan on using SC Rosa’s Sync Nuke, EX is a great deal, as her low SpA means she really wants any extra advantage she can get for her damage, especially as her multipliers might not be fully set up when the moment to sync comes. However, if you plan on using her as a utility pair or simply Sync with one of her partners, it can be easily skipped.

Critical Strike 2 is the go to without much competition. It is possible to employ another utility option, such as Head Start 1, but SC Rosa’s lack of multipliers means the extra damage from CS2 is a big change.

Sygna Suit Lyra & Celebi is the obvious partner as the only Grassy Terrain setter in the game, but on top of that, they both benefit from the debuffs that both are capable of applying, and SS Lyra can max out SC Rosa’s Special Attack.

Devastation Sync Pairs, especially AoE nukers like Alder & Volcarona and Diantha & Mega Gardevoir, get one of their best partners here with the reliable drops on top of also giving them Sp. Def debuffs, a second damage dealer, and a faster setup with the +1 crit given by her Trainer Move. Overpower Sync Pairs benefit for similar reasons, like Serena & Whimsicott, and some might even have both, such as Karen & Mega Houndoom and May & Mega Latias.

Seed Flare can also be used to set up Sp. Def multipliers too like Brainsteaser and Smarty-Pants for Sync Pairs like Giovanni & Mega Mewtwo Y, although those must be single target. Finally, pairs that just want debuffs in general, like Iris & Hydreigon and N & Reshiram, will also benefit from SC Rosa beyond the already mentioned multipliers.

Rosa & Shaymin are definitely good, but they come at a highly inopportune time. Sygna Suit Thunderbolt Red & Pikachu and Ash & Pikachu have stepped up as some of the strongest offensive units in the game, Sygna Suit Aura Cynthia & Lucario represent a new paradigm in defensive gameplay, and Maxie & Groudon and Archie & Kyogre are here to move the very earth with their elemental powers. And on top of that, next month is October, and the latest Fall units should make themselves known pretty soon. It’s honestly a bit hard to recommend Rosa & Shaymin in the face of this competition, so maybe it would be best to wait for a rerun.

Still, if you do find Rosa & Shaymin to be worth the investment, then they’ll definitely pull through for you in the end.