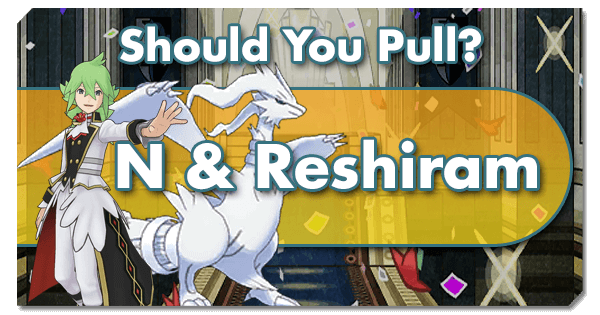 A versatile Sync Pair that can fill the role of Fire Attacker, debuffing Tech unit, Sync Nuker, or any balance of the three.

Reshiram, the Vast White Pokemon, is said to have the goal of building a world of truth. And the truth is that N & Reshiram are psychotic pyromaniacs that love slowly breaking their opponents down before finally burning them to a crisp with blue-hot flames!

N & Reshiram go in a bit of a different direction than what many of us would have expected. When thinking about the theme of Truth, many might consider a straight-forward attacker to be the best fit. Reshiram’s based on the truth, after all; shouldn’t it be straight-forward? But N & Reshiram go the Tech direction instead, and do a very nice job of dropping the opposition’s stats and inflicting status while also having access to solid damage output. I suppose that the truth can be a bit surprising!

So what exactly makes N & Reshiram great? Well, a number of factors come into play here. To start with, we have their Trainer Moves. Dire Hit + is an easy way to ensure a full +3 Critical Rate, while Truth Will Prevail! adds +3 Special Attack, +1 Accuracy, and Move Gauge Acceleration with two uses and no drawbacks at all. Next up we have Noble Roar, which we’ve already seen on Ghetsis & Kyurem, but it’s going in a slightly different direction here. For one, the skill Extend Range turns this and all other moves into AoE moves without any damage/effect loss, and Noble Roar can also potentially drop Attack and/or Special Attack by one additional stage per use via their grid. Next is N & Reshiram’s only attacking move; Blue Flare. This 4-bar attack has solid power and a chance to burn on use. It also has semi-low accuracy, but this is easily rectified via the Accuracy buffs from N’s Trainer Move. This move is also turned into an AoE attack via Extend Range, which doesn’t suffer from the common AoE damage reduction, making N & Reshiram’s damage output very solid overall. This is even further supported by N & Reshiram’s other two innate skills: Piercing Blow and Mind Games 9. Piercing Blows works exactly like it does with N & Zekrom; it allows Reshiram to ignore skills that reduce its damage or prevent Critical attacks while also ignoring any Enduring effect that may be currently active. Mind Games 9, on the other hand, has a 100% chance to drop the Special Defense of Blue Flare’s target, which is everyone thanks to Extend Range. This is a valuable effect, as we have a distinct lack of units that can reliably drop Special Defense. And while all of these factors come together for some solid power, we’re not quite done yet! Even more damage potential can come from N & Reshiram’s Sync Move. In a manner similar to Champion Iris & Hydreigon, N & Reshiram come packed with an innate Sync Nuke effect, two other strong Sync Nukes on their grid, and even the 1.5 Sync Move multiplier from Tech’s EX form. If set up right, this can unleash a raging inferno that makes N & Reshiram pretty attractive for taking out specific targets.

Finally, we have N & Reshiram’s Master Skill; Unova Flag Bearer. Like other Flag Bearer type Master Skills, this provides a flat boost to outgoing damage and a flat reduction to incoming damage that increases for every Unova-based Sync Pairs on the team. This is particularly valuable, as we have no shortage of great Unovan Sync Pairs in the game currently, and more are likely to be on their way.

So we’ve looked at N & Reshiram’s strengths, but what about their weaknesses? Well, they do have a lot of competition. As an Attacker, they compete with Sygna Suit Red & Charizard and Leon & Charizard; two top-tier units in-and-of themselves (as well as living proof that the Pokemon franchise still has an on-going love affair with Charizard). On the Tech side, they compete with fellow Unovan sync pair Champion Iris & Hydreigon, as they have very similar goals and kits on a few different levels. While it’s true that N & Reshiram are the first sync pair to sort of combine these two niches, some players might not get a whole lot out of them if they already have Sync Pairs that can fill these niches separately. Still, N & Reshiram are very effective at fulfilling multiple roles at once, making them worth a second glance.

Now let’s get an idea for how N & Reshiram perform in each major game mode:

Great damage and great Tech come together to make N & Reshiram very solid here. Their ability to hit the entire opposing team at once can easily make the sides a non-issue while their Sync Nuke obliterates the center. They’re also great at playing the second-fiddle role by focusing on debilitating the opposing team in order to pave the way for other powerful Sync Pairs to mow everything down, though picking them up for their Special Defense debuffing capability isn’t always recommended, as the high cost of Blue Flare makes them fairly unwieldy on that front.

N & Reshiram can’t do a ton here by way of sheer damage due to their reliance on skills for power, but they can operate if paired with other Sync Pairs that can passively boost stats, and are very solid in a Tech role, where they don’t need buffs to spam Noble Roar.

Strong AoE damage plus a powerful Sync Nuke can obliterate Battle Challenges, though the setup time can be an issue. Full Force Battles in particular can be a pain for Sync Nuke builds, as each layer of opponents will come in fresh and will need to have their stats dropped for maximum damage.

A lot of Legendary Arena bosses buff their own offenses, and stat drops carry between HP bars, so N & Reshiram can be a huge thorn in the side of select Legendary Arena bosses while providing a powerful Sync Nuke to take down enemy’s bars. Their Unova theme skill will have utility in some challenges, but their other skills are unlikely to be super-useful currently.

While N & Reshiram are fine-and-good here, potentially obliterating the Unova stages with ease. But we already have a number of good Unova sync pairs that can do the same, so N & Reshiram may be over-kill here.

These are generally the most important tiles on N & Reshiram’s grid:

Do we even need to say it? Critical Strike 2 is the gold standard. Defense Crush 2 is worth noting given the fact that literally every move that N & Reshiram launch hits all opponents, but the way that N & Reshiram already drop the opponent’s Special Defense means that they’re probably best when paired with other Special Attackers or as the main attacker for the team.

N & Reshiram are able to setup their own offensive capabilities with ease, so most stat boosts outside of obvious choices such as Speed for non-Pep Rally builds won’t do much for them. Swanna & Skyla can tank, boost Speed far faster than N & Reshiram can on their own, buff Defense, provide Potion support, and even power up N & Reshiram’s Master Skill. Sygna Suit Elesa & Rotom can take on a bit of Buffing duty to let N & Reshiram focus on damage and debuffing earlier, accelerate the Sync Move counter for a faster Sync Nuke, and power up their Master Skill as well. Champion Iris & Hydreigon have, as previously noted, a kit that’s similar to N & Reshiram on several levels. Because of this, the two can work together to speed-run the debuffing process and start clobbering the opposition as early as possible while N & Reshiram’s Master Skill grows all the stronger by being paired with a Unovan Champion. Ironically, N & Reshiram also have great synergy with Ghetsis & Kyurem, as they have very similar needs and can play off one another easily for huge resulting damage. Maxie & Groudon can call up the Sun and boost Reshiram’s Blue Flare even farther, putting their damage far above what they would otherwise be capable of. Sygna Suit Leaf & Venusaur can tank like pros and debuff both Defense and Special Defense, boosting N & Reshiram’s damage potential even farther as a result. Though it’s worth noting that they really appreciate taking an early Sync Move for themselves, as Mega Venusaur enjoys a solid bulk increase. Lillie & Lunala can work with N & Reshiram to deal high damage together, and can capitalize on Special Defense drops with Moongeist Beam. Plus, pairing these two together is even better than adding another Unovan Sync Pair, as their base Master Skills stack! Just note that move gauge issues may appear with this pairing, as both want to use 4-gauge moves.

So are N & Reshiram worth the gems needed to pull them? Definitely. They have a lot of utility behind them, and can slot in on many teams to great effect. If Fire damage, stat drops, or a simple EX Tech Sync Nuke are on your wishlist for Sync Pairs, then N & Reshiram are what you’ve been saving for. But if you already have Sync Pairs that can fill these niches, then N & Reshiram may be a bit redundant outside of stages where two or more of their talents are needed at once.