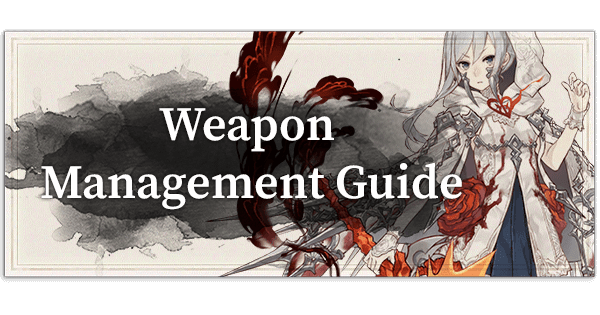 Welcome to the treacherous world of SINoALICE! In a place like the Library, danger lurks around every corner, so you better have your weapons at the ready! Preparation is key and this guide aims to teach you everything you need to know about managing your weapons and equipment.

While the majority of this guide will be referring exclusively to weapons, everything here can be applied to armor and Nightmares as well.

Before we get into the nitty-gritty of what to do with your weapons, let’s go over what your weapons are and what they do.

Equipment comes in 6 different rarities: C, B, A, S, SS, and L. Weapons range from A to L rarity. The highest rarity weapon you can pull in the gacha is an SS, but that can be later evolved into an L. There are eight types of weapons to be found in the game which are then further broken down into two specific roles: Attack type weapons and Support type weapons. Each job has a single primary weapon, while other weapons of the same type are secondary weapons they are also able to equip.

Attack Type weapons are the damage dealing weapons in the game. Breakers, Crushers, Gunners, and Paladin Jobs are able to use these weapons. Breakers use Swords as their primary weapon. Crushers use Hammers, Gunners use Bows and Guns, and Paladins use Polearms. They each deal different types of damage and can hit a different amount of targets.

Support Type weapons are, as the name implies, primarily for support. Sorcerers, Clerics, Minstrels, and Mages are able to use these weapons. Sorcerers use Grimoires as their primary weapon. Clerics use Staves, Minstrels use Instruments, and Mages use Focus weapons. With the exception of Focus weapons, none of these weapons do any damage and instead heal/buff your allies or debuff enemies.

Now that you know the roles of all the weapons and what they do, let’s begin preparing for battle. You won’t get very far in The Library with bare bones weapons, so it’s time to Strengthen them. Strengthening weapons allows you to raise their level and skill levels by consuming other weapons or EXP fodder. 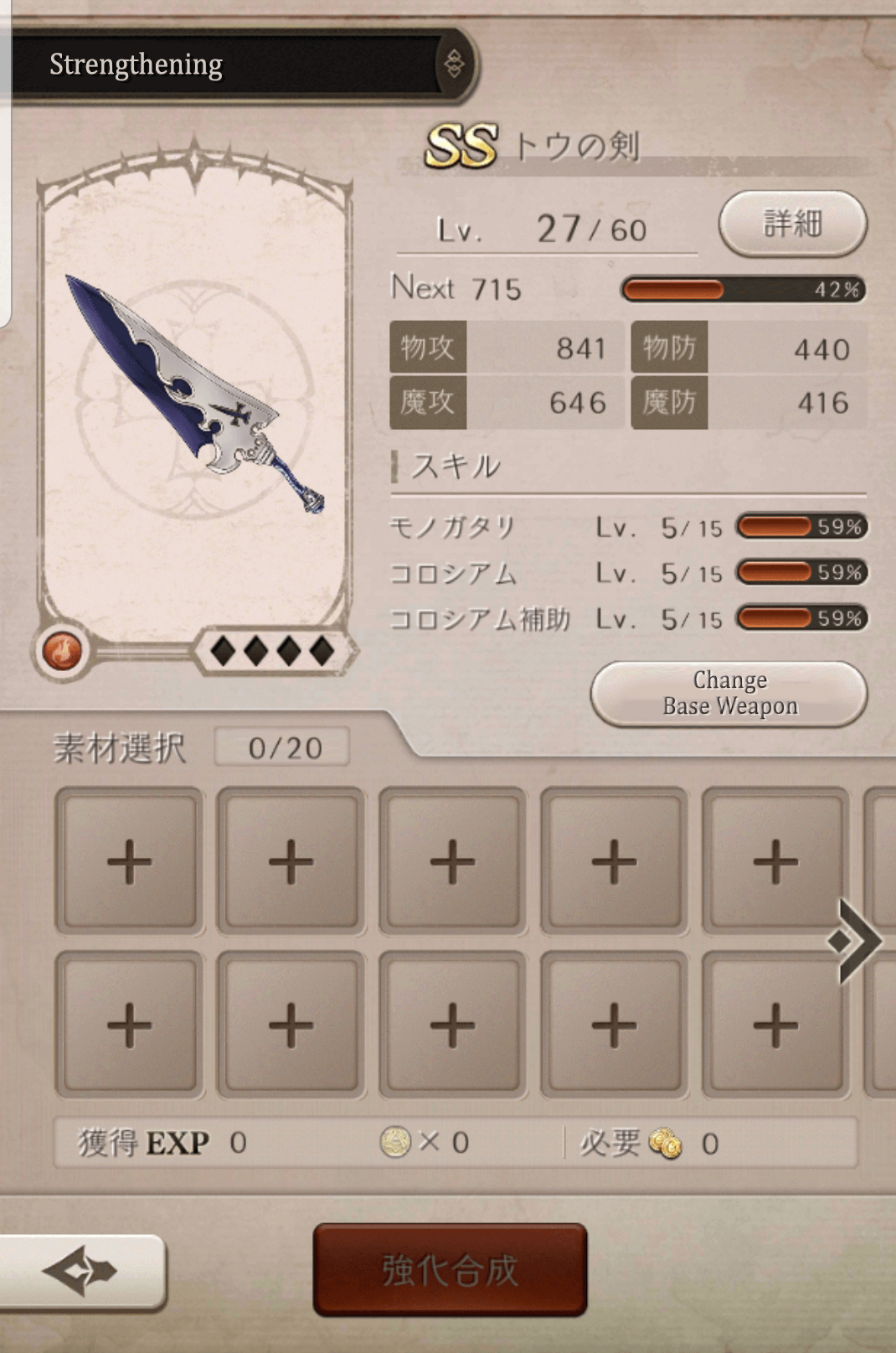 Upon entering the strengthening menu, you’ll be greeted with this screen. The top half shows you your currently selected base weapon to level, it’s current level, stats, and skill levels, and allows you to swap to a different base weapon.

Once you have selected your base weapon, tap on the boxes on the bottom and begin selecting the weapons or fodder you would like to consume. When consuming other weapons, you will earn Charm Medals proportionate to the rarity of the item. You’ll receive 1 for A weapons, 8 for S weapons, and 64 for SS weapons. After making your selection of weapons, the bottom bar will tell you how much EXP you’ll earn, how many Charm Medals you’ll receive, and how much gold the leveling will cost.

EXP Fodder differs depending on what type of equipment you want to level and they all range from rarity C to SS.

To push our weapons beyond their limits, we need to Limit Break them. Limit breaking allows you to fuse two duplicate weapons together to increase both the level cap and the maximum skill levels. All weapons and Nightmares can be limit broken up to four times. Like with Strengthening, you will receive Charm Medals for each piece of equipment spent during limit breaking. 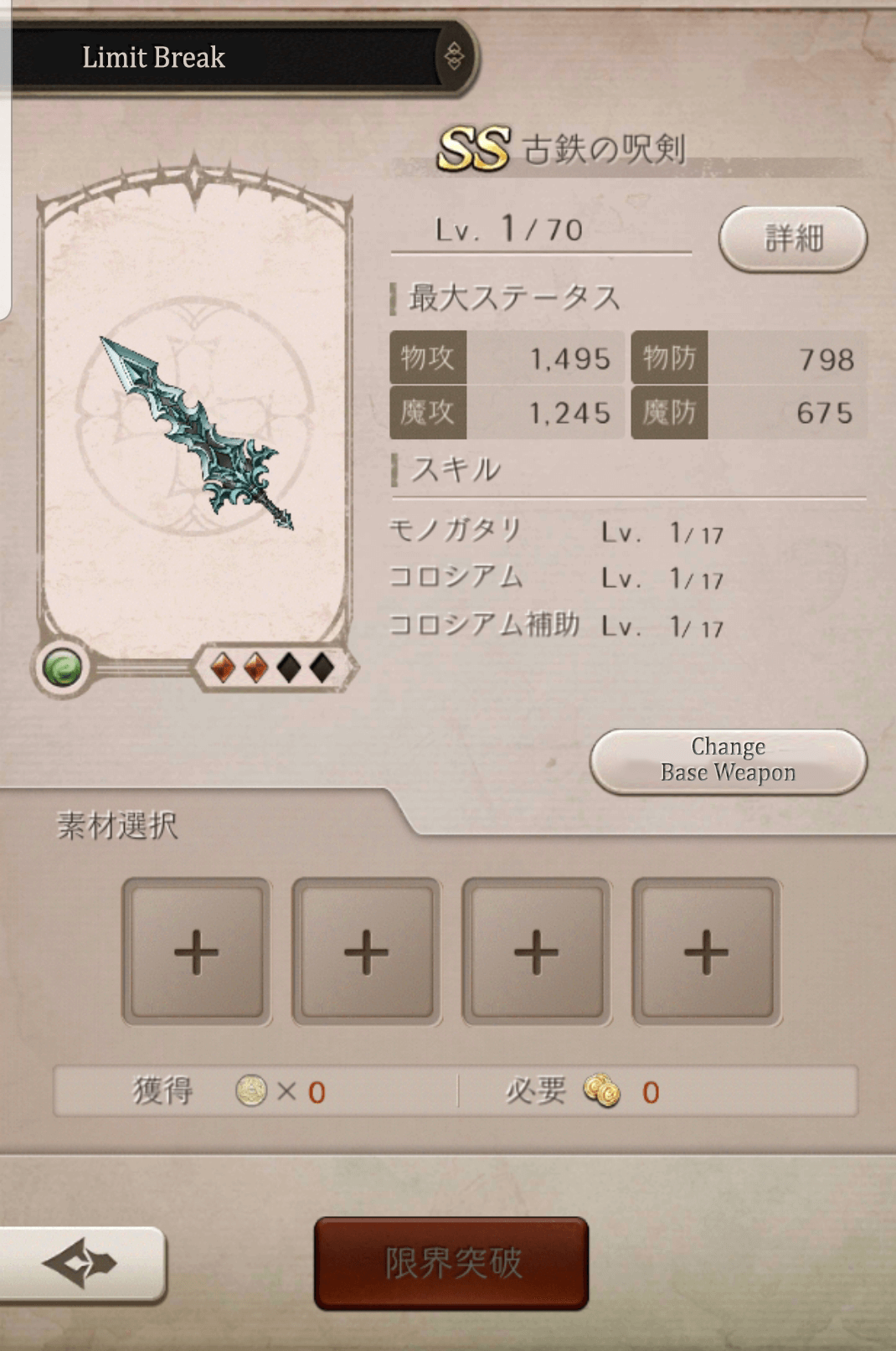 Similar to the Strengthening screen, the Limit Break screen shows you the same information at the top. The diamonds under your selected weapon show how many times it has been limit broken. You may select up to four duplicate weapons at once for limit breaking. You can see the cost and how many Charm Medals that will be received at the bottom.

The final step in managing our weapons is Evolution. Evolution increases the rarity of a piece of equipment. Doing so will increase the level cap and stats of your equipment even further. SS equipment will increase to L rarity, S will go to SS, and A will go to either S, if the weapon cost is 9 or 10, or SS, if the cost is 11 or 12.

Before an evolution can take place, three requirements must be fulfilled: 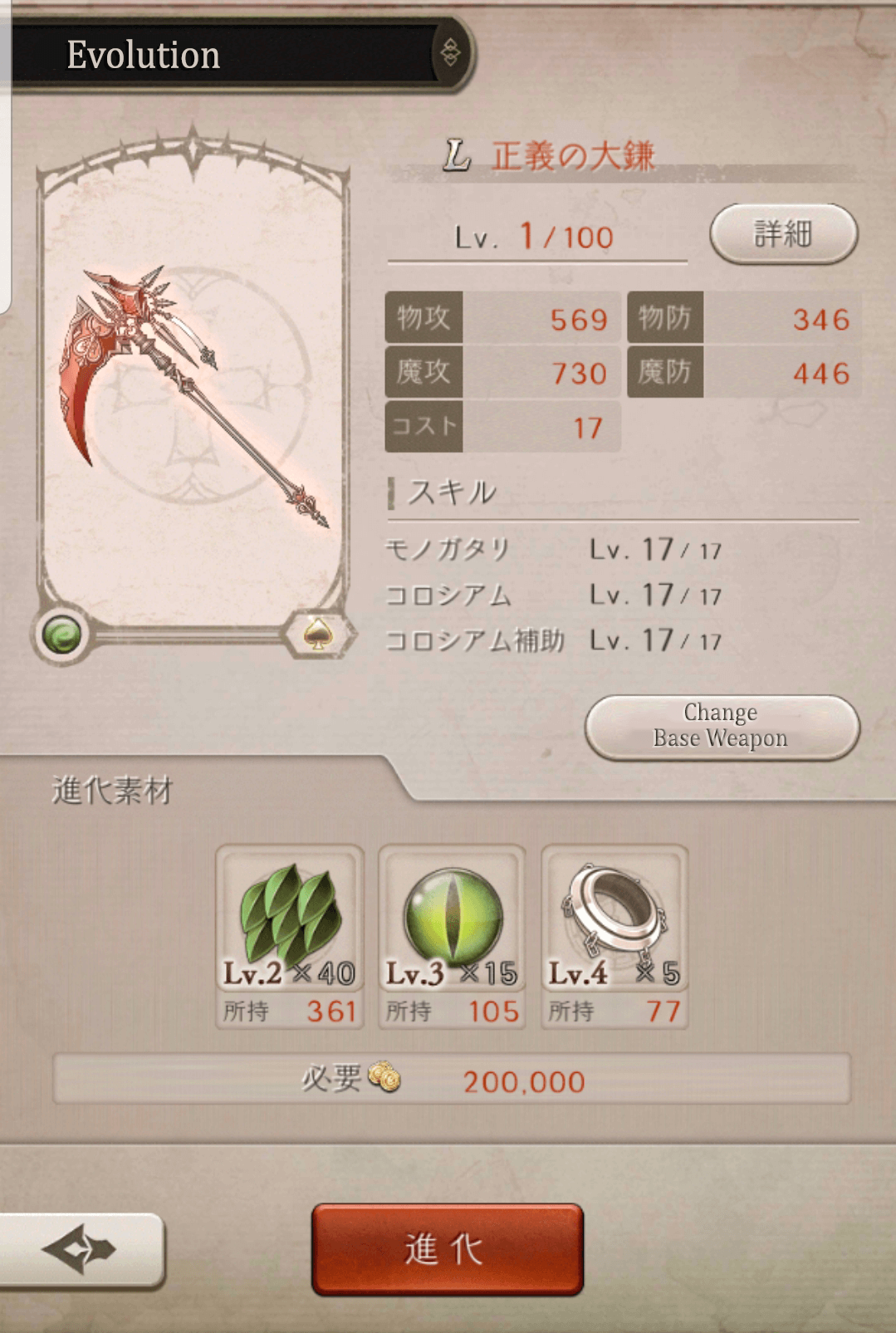 Once you’ve selected the weapon you want to evolve, you can see everything you’ll need to perform the evolution. The numbers next to the material show how many are needed, while the ones beneath in red show how many of the material you currently have. You can also see the new level cap of the evolved weapon. The spade under your selected weapon shows how many Evolutions it can perform.

Finding yourself with too many weapons in your inventory? Selling weapons is a quick way to clear out your inventory and earn some gold and Charm Medals along the way. The same Charm Medal amounts are awarded for selling vs Strengthening or Limit Breaking, so no need to worry about losing Medals by selling. 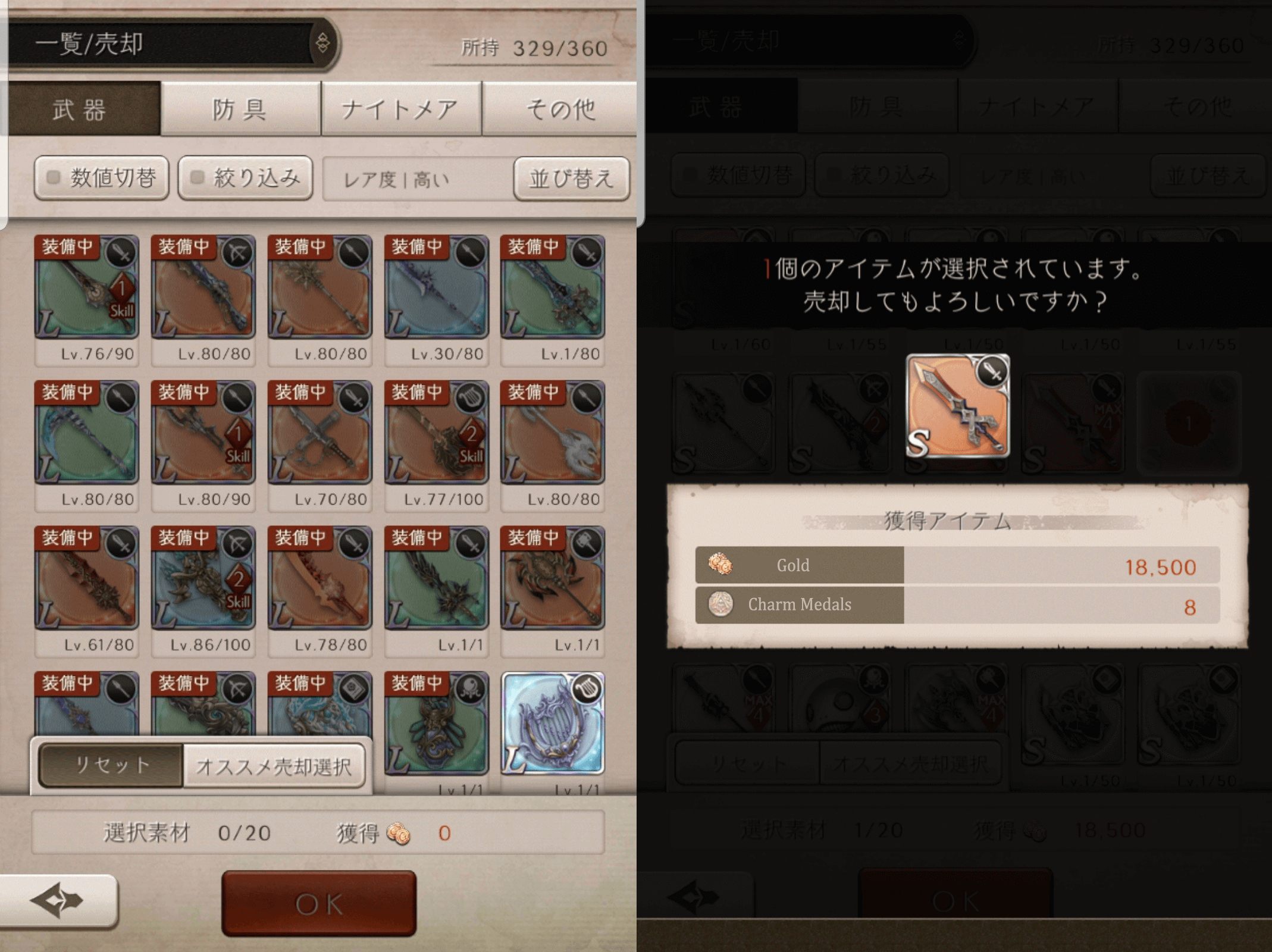 Once in the selling menu, you can select up to 20 weapons to sell at once. Currently equipped weapons will be grayed out and aren’t able to be sold until unequipped. After tapping OK, you will get a summary pop up that tells you how much Gold and Charm Medals you will earn for selling the selected items.

Please note that, while selling weapons is an option to earn gold, you can just as easily earn gold via Gold Dungeons. If you still wish to sell your weapons, only sell your A and S rank weapons. Unwanted SS weapons can be used in the Recycle Gacha to obtain 2 SS cost 18+ weapons for 600 Twilight Crystals.

With that, you’re ready to take on the creatures of The Library! Have fun tearing through enemies with your powered up weapons!

BubblegumZombie
Artist, Singer, and Mobile Game Enthusiast. My goal is to make mobile games around the world more accessible for everyone! I've been playing SINoALICE since September 2017. Yoko Taro gives me life.