Jobs and What They Are in SINoALICE 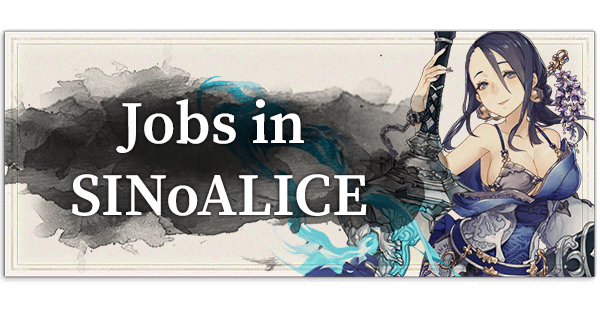 In SINoALICE, the Character roster consists of 8 different Jobs for 8 different Characters (Alice, Snow White, Cinderella, Gretel, Sleeping Beauty, Red Riding Hood, Kaguya and Pinocchio, with more to come). Here's what these Jobs are and what they do.

Jobs indicate the Character’s Class when fighting in a stage, raid or colosseum. Each Job has their own weapon specialty but can equip other weapon types as well. Most Jobs can be obtained along with their Job Weapon in the gacha, but some are obtained via special missions, as part of paid gem packs or event rewards while their default Jobs can be obtained after clearing Chapter 1-1 of their respective stories in the Impulse Arc (Hatred Arc in the case of Little Mermaid and Dorothy, Reality Arc for the Nutcracker). The table below indicates the 8 basic Jobs, their weapon type and specialization:

Each of the 8 jobs are divided into two categories: DPS (Damage per Second/Attack) and Support. DPS jobs are Breaker, Crusher, Paladin and Gunner, while Support jobs are Minstrel, Sorcerer, Cleric and Mage. Within a guild, a set up of 5 DPS and 10 support is highly recommended.

When setting up a grid, bear in mind that DPS jobs cannot equip support weapons and vice versa. For example, A Crusher can equip hammers, but can also equip Swords, Ranged and Polearms. However, a Crusher cannot equip Staves, Orbs, Instruments and Tomes. Similarly, a Minstrel can not only equip Instruments, but also Tomes, Staves and Orbs - not Hammers, Swords, Ranged and Polearms. On the other hand, Subgrids can bypass these restrictions. Bear in mind though, that you cannot use the weapons in the subgrid and each item within the subgrid adds 10% of their total stats to the overall grid power.

There are also event-exclusive Jobs, but they all follow the standard 8 jobs and have little to no difference between the two categories. The only difference is the Character’s appearance.

Each job, once unlocked for each Character, allows you to play as a certain Character with that Jobs. In Job Enhancement (found in the Enhance/Evolve/Sell segment), each Job carries certain boosts when they reach a certain level. These are Job Boosts and Global Boosts. Job Boosts provide benefits to the Character by a certain amount when using their specialty weapon in their story areas, while Global Boosts provide stat increase to everyone. Literally. In order to take things further, invest in Arcanas, which can be used to increase the max. Level of a Job, therefore gaining more bonuses.

For beginners, it is highly recommended to roll as many Jobs as possible and play the game in order to gain Proficiency EXP that can be used to level the Jobs unlocked in order to increase the overall stats of the grid. In addition, at certain Job Levels, the Job’s Job Story will be unlocked for a total of 4 parts, similar to the Weapon Stories. Alternatively, Books of Opportunities can be used to gain additional Proficiency EXP.

Should you choose to reroll, it is advised to get at least 2 SS/SR weapons, with at least one of those SS/SRs being attached to a Job. If you’re aiming for a usable grid for easy progress, try to get at least 2 SS/SR of the weapon your ideal job specialises in. Bear in mind, however, that a number of these weapons will eventually be powercrept by other weapons that come later in the game’s life. And even then, weapons are more significant than Jobs when creating a grid so roll for whichever Job catches the eye. All default Jobs will be made available in all gacha banners after their introduction.

In the Global Version, players have an infinite reroll at the beginning which has the possibility of a job.  Since it is much easier to reroll, there is no reason not to reroll for a Job and SR weapon.

In the Japanese version, the Beginners Gacha lasts for 36 hours for new players and is a step-up gacha series of 6 banners consisting of 3 steps each, the last of which guarantees the featured Job and their weapon. There are also guaranteed gacha banners which cost 500 Twilight Gems per multi-roll which gives you at least 1 Job and its associated weapon.

Once you are proficient enough, roll in the specialized gacha banner, which boosts the appearance rate of a weapon class. However, be warned as weapons from other classes that your job can equip will sometimes show up in the banner of your choice.

Because each stage and raid have Area Bonuses, which increases the effectiveness of certain Characters while playing in that stage/raid, players should have at least one of each Character to utilize the Area Bonus.

The Special Cases: Half-Nightmare and the Sin Series

The Half-Nightmare Job, introduced in the Grand Colosseum, is a special Job that provides buffs to a certain weapon type while giving demerits to two others at 75% each. The only way to get this Job is to spend 50 Grand Medals per Job in the Grand Medal Shop, which in turn are obtained in the Betting Medal Shop (10 per month) or through victories within the Grand Colosseum (amount depending on how many victories and division of the guild). Their Level 1 Arcanas can be purchased at the Grand Medal Shop at 75 Grand Medals each while Level 2 Arcanas for some of them can be found in the Charm Medal Shop for 2500 Charm Medals each.The Half-Nightmare Jobs are stated below:

The Sin Job series, introduced during the 1st Anniversary in the Japanese server, are themed around the Seven Sins, and give boosts to weapons of a certain Element alongside their specialized Weapon Type. Normally, a regular Sin Job will boost the specialized element, carry a demerit to the element strong against them, but does not bring demerits to the element weak against them. For example, a regular Fire Sin Job will bring a demerit to Water Element weapons, increase the effectiveness of Fire Element weapons and does not demerit Wind Element weapons.

In the Reality Arc, a new Job Type called the Alternative Job was released, featuring the Characters in a modern day setting. This Job is slightly different than normal - They focus more on overall stats as opposed to boosting weapon types in the Character’s special area. Here’s a table to compare:

Notice the huge difference between her regular Breaker Job and her Alternative Job? However, despite the differences, an Alternative Job is no different from a regular Job when it comes to combat. They will still have Area Bonuses applied. Even so, players should aim for the Alternative Jobs in order to increase their overall stats across all grids. Below is a list of Alternatives so far:

The Fusion Arc also introduced an Alice (Alternative Blood) Job, which provides the same benefits as her Alternative Job except that the bonuses are doubled. No word on whether this Job will be offered to other Characters, unfortunately.

Note that unlike regular jobs, Sin and event Jobs CANNOT be obtained in regular gacha banners if you miss their initial banner(s) - to get them, you have to wait for special events such as Christmas, Anniversary and Guaranteed banners, or their banner's rerun. Alternative Jobs can be found in monthly banners, but at a very small rate.

Once you’ve picked your Job, it’s time to equip your weapons, armour and Nightmares, and head out into the world of SINoALICE. Have fun!