Nightmares and How They Differ in Skills, Costs and Timing 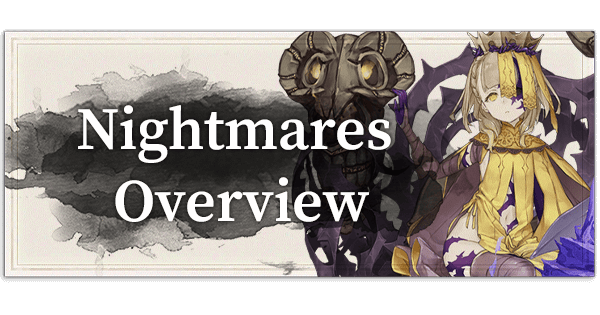 Beside jobs and armors, there’s also one more thing that’s just as important to learn in SINoALICE: nightmares. These nightmares are just as important in all aspects of the game, and their usage may vary depending on their skills. Below are basic introduction to what they can do on both Story and Colosseum.

A nightmare is basically a type of monster that you can equip to your job/grid just like armors and can be summoned in battles to aid allies and cripple opponents. Upon summoning, it provides various effects to either your allies or your enemies’ stats, weapons, and other miscellaneous mechanics such as SP or HP.

Alongside rarity, the more expensive – or harder to obtain – a nightmare is, the better its stats and performance usually are. Hence, if one were to rank the kinds of nightmares in SINoALICE, it would be:

Do note, however, that performance stated above doesn’t just point to their skills – other factors such as efficiency also plays a part, and they will be defined later under the Effectiveness and Efficiency part below. 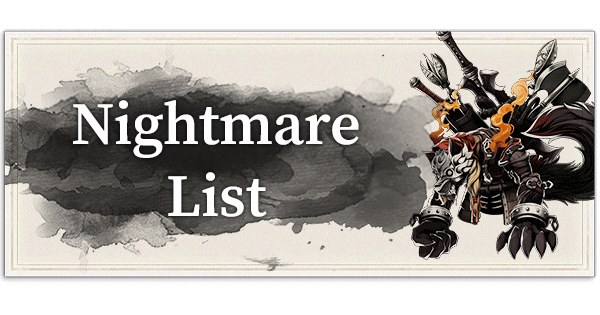 Many Types of Nightmares Categorized by Skills

Let’s break down the many types of nightmares present in SINoALICE categorized by its skill:

These 8 make up the core of nightmares’ skills in JP SINoALICE, although of course it will take time for the meta nightmares to come to global. Additionally, there are also several nightmares initially designated for colosseum usage as their prime focus, making them not fit into any of the 8 categories above. They will be covered below under the Colosseum Skill topic.

Now, the usefulness of a nightmare may vary, depending mostly on effectiveness upon usage and efficiency.

Effectiveness basically refers to how beneficial the skill is upon usage; such as how it’s better to use a nightmare that buffs multiple stats than one that only buffs a single stat, or an elemental nightmare with larger effect increase to weapons.

Efficiency on the other hand involves time and cost. In colosseum, this factor plays an even bigger role than some may think as time is of the essence and it is better to have nightmares with shorter summoning time and zero SP cost. These two particular factors are also heavily tied with the nightmare tier above as well – those that require SP to summon are raid and story nightmares, while gacha and paid nightmares are free of such handicap.

Meanwhile, story nightmares can have identical or even longer preparation time & activation time as nightmares above its tier, yet have underwhelming performance in comparison. Raid nightmares are arguably on a borderline position of usefulness, as some of them possess same or unique skills like several gacha nightmares yet lose in cost efficiency. They’re mostly seen as an “alternative” if there’s no better nightmare to use of the same skill. Raid nightmares can be obtained from clearing the 3rd stage in normal difficulty of the said raid, with a chance for them to drop exclusively in any of the normal stages as well.

To analyze nightmares’ characteristics and see how they differ in both their story and colosseum skills, let’s break them down:

Story Skill of nightmares normally tend to be simpler as they’re designed for PVE usage. They have no more than 20 seconds of preparation time, and no more than 50 SP cost-wise, as PVE only has half of colosseum’s SP bar.

Most nightmares of certain types listed above actually have identical skills in between their story and colosseum skill; and these types include those that aren’t initially designated to be colosseum-centric: elemental, buff, debuff, and SP. Both skill increase and skill decrease nightmares usually have elemental skills as their story skill instead. Meanwhile, rate increase and rate decrease nightmares have various skills differing with each other – they can be either elemental or HP recovery. Additionally, HP recovery is also a special skill only present as a story skill.

Colosseum Skill of nightmares tend to have the most variation as they’re devised for PVP usage and several other factors (such as weapons having two skills in colosseum; normal colosseum skills and colosseum aid skills) are also taken into account. This makes several nightmares specifically designed for colosseum-usage purpose shine notably.

A nightmare’s preparation time in colosseum can go up until 100 seconds, and cost usage can go up until 200 SP. Furthermore, selection of what kind of nightmares one should use in Colosseum heavily depends on their guildmates’ grid as one of the strategies involved.

Now, as mentioned above; there are nightmares specifically designated for Colosseum usage: what and how exactly do they differ? These particular miscellaneous skills can go in distinct gimmicks such as messing up with opponent’s nightmare timing or giving allies the upperhand in disadvantage.

Another example of the former would be Wind Golem, who rewinds opponent guild’s nightmare back to its full preparation time.

Meanwhile, the most common example of the latter would be Barbarian, who gives a massive boost to vanguard allies’ damage dealt while at a disadvantage.

These are only some of the many examples of Colosseum-focused nightmares that make up most of the current meta in JP; so make sure to always pay attention to a nightmare’s Colosseum skills and match them with whatever strategy is most suitable for the guild!

Yes, the uniqueness of a nightmare in SINoALICE doesn’t end with just knowing the differences between their Story and Colosseum skill – there exists a certain particular category of elemental nightmares known as the double-edged swords. These nightmares basically buffs allies’ certain element while also buffing enemies’ certain differing elemental weapons all at the same time for the duration they’re up. For example; there’s Dryas who gives buff to allies’ wind weapons while also buffing opponent’s fire damage.

Always try to pay attention to nightmare usage in general as they may change upon meta, be it on Story mode or Colosseum. Some future contents including addition of features such as Grid Switch on Colosseum also plays a part in how nightmares meta evolve, so don’t be afraid to brainstorm on what’s best to use upon playing.

Sylverith
I usually write or translate in my free time~