Survival Guide to the Colosseum 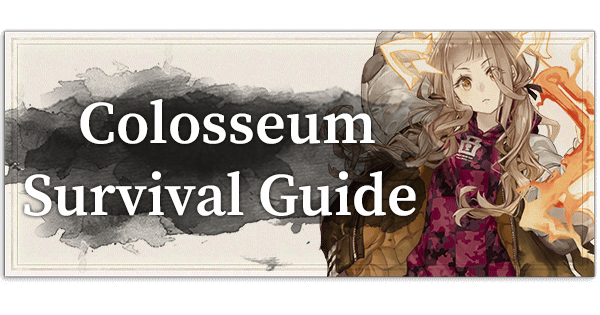 Part of the fun when players join a guild is the Colosseum - a Guild vs Guild match where guilds duke it out for 20 minutes. It’s a battle to see who can hit harder, heal faster, strengthen better and debuff lower.

What is the Colosseum?

The Colosseum is the PvP segment of SINoALICE. This game mode pits two guilds against each other in a battle occurring daily at a designated time and lasting for 20 minutes. Every time an attack hits an opposing player, the guild gains Inochi (score points). Whichever guild gets the most Inochi after time runs out wins the match. Participating in Colosseum earns you 4 gems as part of daily missions, so do attend as many days as you can.

Aside from the regular Colosseum, there are two other Colosseum events  - Blood Colosseum and Gran Colosseum.

During the Blood Colosseum period, you’ll see an extra log-in bonus screen where you’ll alternate in receiving gems and Character Blood, which allows you to pull an exclusive gacha to Blood Colosseum called the Blood Box Gacha. A single roll in the Blood Gacha costs 5 vials of Character Blood. It’s important for beginners because it is the only way to get Nightmare Evolution materials if you haven’t unlocked the 3rd set of Nightmare mines and don’t plan to exchange them for medals in the charm medal shop. Other rewards from the Blood Gacha include Blood Medals for the Wrought Iron series of weapons, Nightmare enhancement materials, gems if you’re lucky enough, and the Evil God series of weapons, limited to 3 of each per pool. The Blood Colosseum event is usually held at the beginning of each month for 7 days.

A few days before Gran Colosseum begins, a pre-registration period will appear for 3 days. In order to participate in the Grand Colosseum, your guild’s leader or vice leader(s) need to register the guild for that month’s Gran Colosseum. Afterwards, the guilds are sorted into 3 different Divisions - Division 3, Division 2 and Division 1. The top few guilds from each division will then head off into the Finals which takes place 2 days after the last Gran Colosseum match.

On the first day of the event , a login bonus containing Betting Tickets will appear. These Betting Tickets are used in the Gishian Bar, where participating guilds are sorted into groups representing 4 suits of cards - Hearts, Spades, Diamonds and Clubs. The group with the highest Inochi score total at the end of the day is declared the winner, and Betting Medals  are distributed accordingly to players who placed their tickets on winning combinations. Betting Medals can then be exchanged for a number of useful items such as Skill Fodder Weapons, the Nightmare Yokubou Cactus, gems and Gran Medals in the Betting Medal shop.

After the Gran Colosseum Finals, a reward of Gran Medals, Gems and Charm Medals will be distributed to participants according to their guild’s performance and final ranking. As these rewards can be very generous, it is highly recommended to register for Gran Colosseum on each iteration. The Gran Medal Shop is also the only way to get the Half-Nightmare Jobs, as well as the Job Weapons for certain Jobs that are obtained as rewards in the main story.

First things first, you need to be part of a guild. Without one, you cannot access this game mode. You can either find a guild to join, or make one yourself and recruit other players. Guilds are unlocked the moment you clear Chapter 2 Part 10 of any Character’s Impulse Arc.

However, the Colosseum cannot be entered at any time. As matches occur in real-time, the Guildmaster (or yourself if you’re the guildmaster) has to choose a time for your guild to battle. The timeslots (in JST) are: 8:00, 12:30, 18:00, 19:00, 20:00, 21:00, 22:00 and 23:00. Therefore, try to join a guild in a timeslot you can consistently attend and, if you’re making a guild, bear this in mind and pick one so most of your members can participate. Guilds are also ranked both according to overall standing (numerical) and track record (alphabetical). There are 5 letter rankings in Colosseum - D, C, B, A and S. All guilds start out as D rank. Winning 5 matches moves the guild up a rank, while losing 5 matches moves the guild down. If the win-lose ratio is roughly the same, the guild enters a tiebreaker spanning 2 matches.

Welcome to the Colosseum

Once you’re in the Colosseum, the first thing you’ll see are the 5 vanguard members for both your guild and the opponent’s. Tapping on the left arrow showcases your guild’s rearguard while tapping on the right arrow displays the rearguard for the opposing guild. Before you begin, you can choose to switch grids (unlocked once your most powerful grid reaches 170k and above), do some last-minute strategizing, and encourage each other.

The Colosseum isn’t just beating your opponent to kingdom come. There are 3 important phases in the Colosseum: Shinma phase, Ship Attack phase and Recovery phase.

The Shinma are special summons that only appear during the Colosseum. They appear twice - one around the 16 minutes left mark, and another near the 8 minutes left mark. You can check which ones will appear in that day’s colosseum by tapping on the countdown timer and looking at the match info.

Each Shinma will feature 1 support weapon class and 2 DPS weapon classes in order for a guild to summon it. D-rank, C-rank and B-rank guilds need to use these weapons 50 times, while for A and S ranks the count is 75 times. The first guild to hit the target amount gets to summon the Shinma, dealing some damage to the opposing guild and, for 1 minute and 30 seconds, receives benefits for the weapon types the Shinma was summoned with. Because of this, the Shinma are able to turn the tide of a match, so do your best to get them!

Note that if you enter Ship Attack Phase while Shinma bonus is active on your end, the Shinma will leave. However, Shinma bonus will still remain if your whole vanguard is knocked down and enters Recovery Phase.

As of May 2019’s Gran Colosseum in the Japanese server, there’s a bonus for ships downed during a match. Therefore, it’s highly recommended to down as many ships as possible, especially during Gran Colosseum matches.

If your guild’s vanguard gets taken down, your guild enters a Recovery Phase where you try to revive the vanguard while the opponent tries to break down your ship. For every vanguard revived, 5 seconds will be subtracted from the enemy guild’s timer to attack your ship. This is also the best time to play the cleaning minigame to restore SP before heading back into the fray.

After winning/losing, the scores for the match will be displayed. Personal Colosseum rewards will be distributed a minute after the match, while guild rewards and ranking for Inochi gained, heals, buffs, and debuffs are shown roughly 5 minutes after. Each letter ranking gets a certain number of rewards - the higher the rank, the better the rewards. Additionally, the rewards increase if you win.

Now that you know the gist of the Colosseum, it’s time to get ready to rumble! Good luck out there!