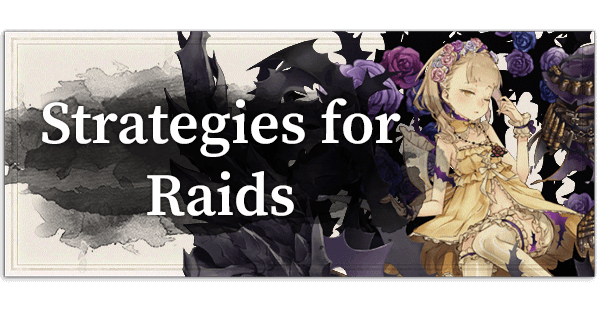 Raids run on a timed schedule, specified in in-game news, allowing players to track how long they run for and which batch will be running. Raids are open for 30 minutes each instance, after which players will have to wait for next schedule. It is highly recommended to participate on these, as each stage and mode rewards players with Twilight Crystals alongside  cores which will be beneficial for later content along with Husk raid weapon series that can easily be max limit breaked.

Each raid will have a character bonus affiliated with it: that character will receive the additional bonus effects to weapons used by their selected job just like in Story stages. Unlike events, there are no revives, so it’s advised to play with caution when dealing with raids. Luckily, entering these instances will only consume 5AP. DPS and supports should equip healing weapons because early game survivability will be difficult. Similar to all content, supports are less restricted to using element weapons and should use what is effective.

Upon clearing Normal mode 3 for the first time, players will be rewarded with a copy of the raid nightmare. Afterwards, normal mode 1-3 granting a chance of dropping the Nightmare as well. First clears will be reset every rerun. Once Hard mode is released for a raid, Hard mode stages 1-3 have  a chance to drop a raid boss core. Hard 3’s first hosting will reward players with a guaranteed core which can be used to evolve the respective raid nightmare, evolve husk weapons (future content raid weapons), or for reskilling said husks (only introduced to JP).

Note: enemy types have different attack speeds, weaknesses, mechanics, and some have exceptions, so it’s advised to be familiar with which enemies to prioritize first.

Midgardsormr is a water snake raid with a character area bonus for Snow White. To enter Normal mode 1, players will need a minimum of 80k power and it is recommended to enter using Snow White’s character jobs.

DPS can either use PATK or MATK wind weapons for this raid along with HP recovery weapons since Midgardsormr life drains off players during certain attacks.

It is advised to stall on ghosts in wave 1 until enough players join the instance before focusing on the wolf. It is preferred to target the same opponents as CPUs or party members to burst enemies faster.

For the boss itself, buffs and debuffs should be done during phase 1 while summoning wind element nightmares (e.g Lindwurm, Odio) at the end of Midgardsormr’s first bar or half-way depending on potential damage.

Fafnir is a fire dragon raid with a character area bonus for Little Mermaid. It is preferred to use Little Mermaid Breaker since swords deal single target damage along with having Abyss Blade armor set.

Paladin is another viable option since this instance mostly consists of enemies weaker to MATK. Players will need to equip some fire weapons as there are wind enemies too and, preferably, over ten water weapons.

Supports should bring cleric or minstrel.

Use the Abyss armor set to increase both chosen water element weapon’s effectiveness and damage dealt to dragon types.

Stall at Wave 1 until the party is full, then begin summoning buff nightmares before killing the ghosts to progress through the raid. Focus on the wolf in wave 2, kill the wind plant at the bottom while saving fire weapons for the wind spider on Wave 3 and kill the dragon in wave 3 if there is enough burst in the party. If you lack enough damage, kill plant (debuffer) first but be prepared to heal since dragons deal moderate damage with AOE breathe attacks.

Fafnir has three HP bars so be sure to summon Freeze Golem or Restriction at the end of the first bar or half-way into second. Proceed with caution on the last bar, as Fafnir will begin summoning single target fire pillars that deal high damage (only when allies are debuffed, that’s why you bring minstrels).

Ogre is a wind orc raid with a character area bonus for Alice. It is preferred to use Alice Gunner or Alice Paladin (from story) since the boss in this raid is only weak to MATK damage. Ogre requires strategy so it is advised to pay attention and not to auto.

DPS will need to equip MATK fire weapons preferably, but bring additional wind and water MATK weapons too as Ogre has no magical defense. Abstain of physical-focused jobs purely because even fire PATK weapons will deal only 1 damage to Ogre.

Supports should bring cleric, minstrel while sorcerers are not very effective against PDEF debuffs therefore, sorcerers should consider bringing PATK debuffs instead because Ogre originally has high PDEF it would not be effective bringing PDEF debuffs.

Use the Blackstone armor set to increase either fire bow or polearm damage and for the set bonus providing extra damage to orc types.

Kill the two plants on Wave 1 to avoid being debuffed early in the raid and leave the ghost alive to  wait for your party to fill up. On Wave 2 and 3, it is important to note that normal and hard mode swaps enemy elements. For example, the center orc on Wave 2 can be fire in normal, but changes to water on hard mode. For this reason, it is advised to make two separate grids for normal and hard mode.

During Wave 4, just as the last golem is about to die, summon Yatagarasu to debuff Ogre’s attack upon entering Wave 5 since Ogre will begin the fight by buff wiping instantly. Stall on the first bar while you summon buffing Nightmares.

When everyone’s ready, summon Ugallu or a similar fire-boosting nightmare at the end of the first bar and be prepared to burst all the way into the last bar because if enough time passes during the  second bar, Ogre will buff itself with +10 physical defense and proceed to wipe party buffs again afterwards. Ogre will then AOE party members with rocks.

On the last bar, Ogre will deal additional damage for each death in the party. If more than three members are dead, Ogre will begin one shotting players until everyone is dead, resulting in failure.

Fenrir is a water wolf raid with a character area bonus for Dorothy. Upon Fenrir’s release, Dorothy Sorcerer will be the only job available from story missions apart from the gacha job featuring Dorothy Gunner, hence, it is highly recommended for DPS users to roll or spark her Gunner job during the month. It is advised to use Dorothy Gunner or Paladin as Fenrir has a mechanic that causes PATK weapons to deal 1 damage in normal mode 3 onwards.

Due to the limitation on Dorothy jobs, cleric supports can choose to use a different character altogether for the staff bonus as Fenrir is a beast/wolf type, it will deal high damage and possesses high attack speed making staves essential for the raid. Players using minstrel or sorcerer should equip some staves to aid in healing party members.

Use the Golden Ranged armor set for increased wind bow effectiveness and the extra damage to beasts from a full set.

Avoid stalling and do not auto this raid. If players auto this raid, CPUs are unable to use weapons fast enough jeopardizing heal and DPS weapon timing. It will take longer to clear and will be difficult due to Fenrir’s high damage and attack speed.

Buff from Wave 1 and target the wolves first. When Fenrir drops to 66% of its HP or lower, summon Lindwurm or wind nightmares and burst it. On the last bar, Fenrir will be resistant against PATK and can only be damaged by MATK weapons.

Grief Spider is a fire spider raid with a character area bonus for Sleeping Beauty. It is preferred to use Briar Rose Breaker or Gunner since single target is ideal for this raid. Supports should bring cleric or minstrel.

On Wave 3, target the High Spider first because it will buff wipe the party. Summon buff nightmares when attacking the top spider and stall on the smaller ones until buffs have been applied before proceeding to Wave 4. Do not stall Wave 4 because golems deal high damage.

Ziz is a wind bird raid with a character area bonus for Little Red Riding Hood (RRH). It is preferred to use RRH Breaker or Gunner.

Keep in mind that Wave 1 Ghosts can only be killed by PATK or wind weapons so most players will choose to run as Breakers. For MATK DPS, bring 14 Fire and 6 wind guns because there are water ghosts that can only be killed with PATK unless MATK DPS bring wind weapons to defeat ghosts or are buffed enough to deal damage. Ideally, join parties with Breakers because they’ll deal with the ghosts.

For this raid, RRH Sorcerer and minstrel are required because Ziz has a party wipe mechanic: once Ziz buffs to +10 in any stat, Ziz will instantly kill everyone .

On all waves, target the monster that accompanies mini Ziz first because as long as it lives, mini Ziz will heal companions and itself. Buff up with nightmares before reaching Wave 4.

Summon Yatagarasu or a debuff nightmare upon entering Wave 5. At the end of the first bar, summon Ugallu or a fire  Nightmare to burst the remaining bars. Do not stall as the raid must be completed before Ziz reaches +10.