Starting Strong in the SINoALICE Colosseum 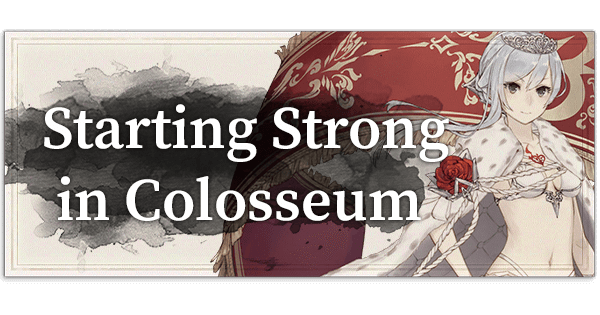 Trying to decide on a class during the confusing early game can be a difficult decision. There are two options that this guide will focus on, each with its own advantages and disadvantages. Some players find a weapon type or particular playstyle that they enjoy and commit early, while others prefer to flit around between the traditional roles of vanguard and support. No matter the choice, remember to have fun with it!

Always set your equipment at least 30 minutes before colo begins, as grids will be locked and players will be unable to modify their main sets!

The first option is Vanguard, the frontline combatants in the Colosseum. Each Guild has 5 Vanguard Players whose role is to tank hits and deal damage to the enemy Vanguard and Guild Ship.

The two damage types in the game are Physical Attack (PATK) and Magical Attack (MATK). It may be wise to choose between either MATK (Bow + Spears) or PATK (Swords + Hammers) early game to maximize the respective attack power stat on a normal character job utilizing those weapons. Once the player has obtained enough weapons, they can start focusing on making one full grid consisting of a specific weapon type; e.g 20 LR Hammers for Crusher or 20 LR Spears for Paladin. In higher ranked guilds, Vanguard players will alternate  between Crusher and Paladin jobs due to the bonuses to their respective multitarget weapons, as opposed to single target focused jobs like Gunner and Breaker.  This strategy should only be attempted when the subset feature has been added. This allows players to swap grids after reaching 170k power and make use of both sets in the same match. Focus on obtaining and leveling Jobs that provide desired stat increases, but don’t forget the importance of HP and a good defense! Part of a Vanguard’s contribution to the team is the ability to take hits. If the team’s vanguards all fall at once, the enemy gets to move on to the Guild Ship phase and attack the guild’s ship for major match points!

Secondly are Supports. For those who enjoy keeping others in the fight, making damage dealers swole and nerfing enemies into the ground, Support might be the ideal position! Unlike the Vanguards, there are generally 10 Support members in any Guild.

Playing from the backrow effectively reduces the player’s ability to deal damage, so don’t bother bringing orbs to Colo unless the intention is to play a Mage. (If the user plays as a Mage, they will need to be in Vanguard due to the penalty of attacking in backline). Instead, it’s recommended to commit to a Job and look for Guilds recruiting this specialization. Clerics are the healers, Sorcerers handle debuffing the enemy, and Minstrels buff the vanguard with the power of song.

Supports that are not Clerics can either be pure Sorcerer or Minstrel, or a combination of the two by mixing Tomes and Instruments in the desired amount. The general spread is 15-5 but it can vary according to Guild needs, Shinma and the enemy line-up. The reason why this doesn’t apply to Clerics is because the Colosseum Aid skills for Staves are unique to healing skills and don’t activate with the ones from Tomes or Instruments. On the other hand, these can activate with each other so a mixed grid for buffs and debuffs won’t have reduced performance. Because of this, Clerics are required to use only Staff weapons in order to remain competitive.

A Support member's duty is to either buff the stats of ally Vanguard members (represented as red numbered “stacks”), lower the stats of the enemy Vanguard with debuffs (represented by blue number “stacks”), or by appropriately keeping damage dealers alive through healing. Coordinating with other Clerics is crucial: notify others when cleaning is needed. If every Cleric stops healing at the same time, it could prove disastrous to the team. (Ideally, healthbars should remain at Max at all times, but there might be situations where a “tactical wipe” is desired so always pay attention to the person calling the shots).

While it may be hard at first to build a weapon deck featuring only the weapon for a chosen role, managing gacha pulls responsibly (preferentially on the respective monthly specialization gacha) and investing additional resources towards collecting and strengthening them will grant a competitive edge in due time!

As a Vanguard, it’s important to work with whoever formulates the strategy for the team. Typically, Vanguards should focus on dealing damage, maintaining combo and reviving when downed. Not taking immediate action can result in an entire team being wiped out, giving the enemy a chance to attack the guild’s ship. For Shinma phases, vanguards should set weapon grids matching the weapons featured by the two daily Shinma summons, which are available to view before each match in the Battle Menu. Nightmare usage is typically dictated by the guild’s tactician.

Each time the defending team reappears in battle after the Ship Attack Phase, they are protected by an immunity shield for a few seconds. It is wise to wait for the opponent’s shield to dissipate before attacking to avoid wasting SP.

Sorcerers mainly focus on lowering the stats of opponents. Minstrels raise stats of Vanguard members. Clerics heal and revive allies. A full buff stack of +20 effectively doubles that stat, and a full debuff stack of -20 reduces it to a third. All of the blue debuff stacks are removed from a frontline player after coming back when their team is knocked down, so it’s best to use debuffs in order to remove buff stacks from every enemy frontline instead of focusing everything into further reducing a single enemy’s stats.

Most coordination in a guild is related to the order of the Nightmares players will summon (as each member can only summon a Nightmare once per battle) and how to approach each Shinma Phase. A Shinma is a special kind of summon that can dramatically turn the tide of a battle or secure a match that is going well. During a Shinma Phase, a combination of three weapon types and a counter for each guild will appear. For each matching weapon type used by guild members the counter will add one point. The guild that first reaches the required amount gets to summon the Shinma, receiving a powerful bonus effect for 1:30 minutes (or until knocking down the enemy Vanguard) for the featured weapons.

Shinma combinations are always a Support weapon plus either Sword and Polearm or Ranged and Hammer. There are two Shinma that will appear in a single Colosseum match and some guilds aim their whole strategy to win a certain Shinma to the point where they will ask every member to include participating weapons.

All Guilds begin at Guild Level 1 and Guild Rank D. Winning five Matches in a row will promote the guild by a rank, and losing five Matches will similarly demote them. Guild Level is based on points scored during Colosseum, and serves as a gauge of a guild’s strength and age.

Always watch that SP during the match! Skill Point capacity is doubled inside the Colosseum, but points don’t refresh automatically. Take advantage of pauses during combat such as wiping out the enemy team to recharge Skill Points. This works just like in the Purification minigame. Each mook gives progress towards a burst attack which, unlike normal cleaning, provides a multiplier to SP obtained so save it for when most needed. Some Nightmares and Staves can refresh SP as well.

The most important thing is attendance. A full, online team of 15 Players with established roles is truly a force to be reckoned with.

The chance of encountering astonishingly powerful Guilds increases as Guild Rank increases. Often called Whale Guilds, they are comprised of players that have invested a fair amount of monetary resources into SINoALICE. It is possible to defeat them with proper strategy, provided there is not a large power gap between teams. If the enemy Guild has a clear numbers advantage, the chances of success are very unlikely. Competition at these Ranks is very intense, and no one wins all of their Colosseum matches. Retreat is never a bad option if it means saving time otherwise wasted on a lost match.

The Importance of Grit

The most important part of being successful in the Colosseum is to maintain a positive, can-do attitude. Everyone wins as a team, and everyone learns from losses as a team. Not all matches are guaranteed victories, and some are guaranteed losses. Practicing good sportsmanship can help lessen the sting of defeat, and it sweetens the taste of victory. Committing to guilds with daily attendance requirements can be tricky depending on an individual’s schedule, but it pays off to see one’s team climb the ranks and reap the rewards.

Most importantly, don’t be afraid to take breaks, and inform the Guild Master if a commitment can’t be fulfilled.