Arknights Lore: Mephisto and Faust In Relation To [Faust] The Play 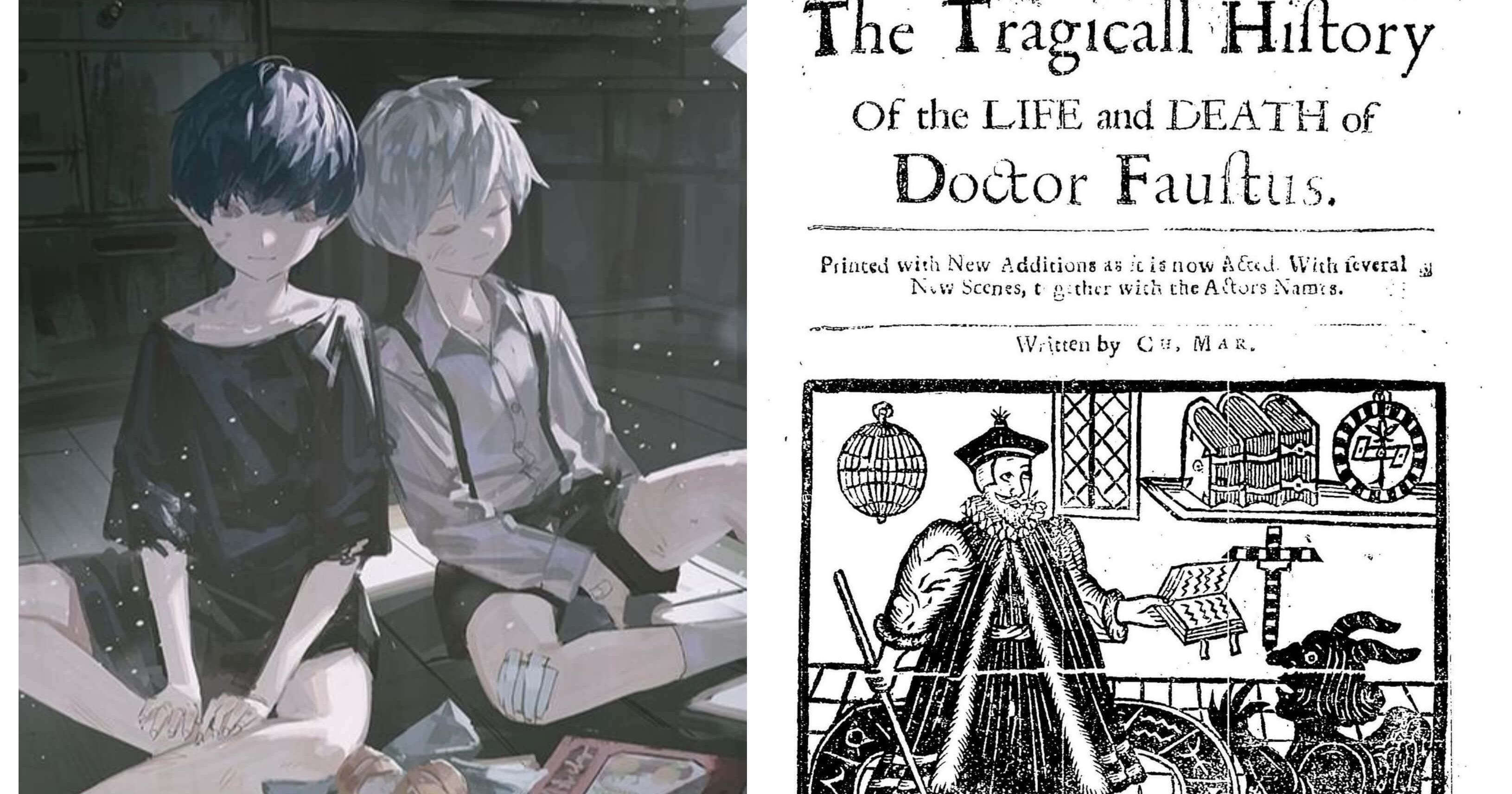 Many thanks to Twitter user ___0xaca for writing this article and discussion is always welcome for ah, more pain. There will be Chapter 8 spoilers, but I will warn before the spoilers come, which will be the final section.

Doctor Faustus, a 5-act tragedy published in 1604 by Christopher Marlowe is about the tragic journey of Faust and the demon Mephistopheles (also known as Mephisto). Faust makes a pact with Mephistopheles in hopes to gain more knowledge of black magic. However, Mephistopheles gave a warning that the pact will cost Faust his life, which Faust ignored. During his pact with Mephistopheles, Faust committed many crimes using his magic including killing his own servants and the duke (He also eventually revived the dead as well), hoping for more power. The pact Faust made with Mephistopheles was to give his (Faust) soul to Mephistopheles for 24 years. As 24 years started to come near, Faust feared the incoming death that was happening and realized his mistakes. He soon dies due to his grandiose of knowledge. 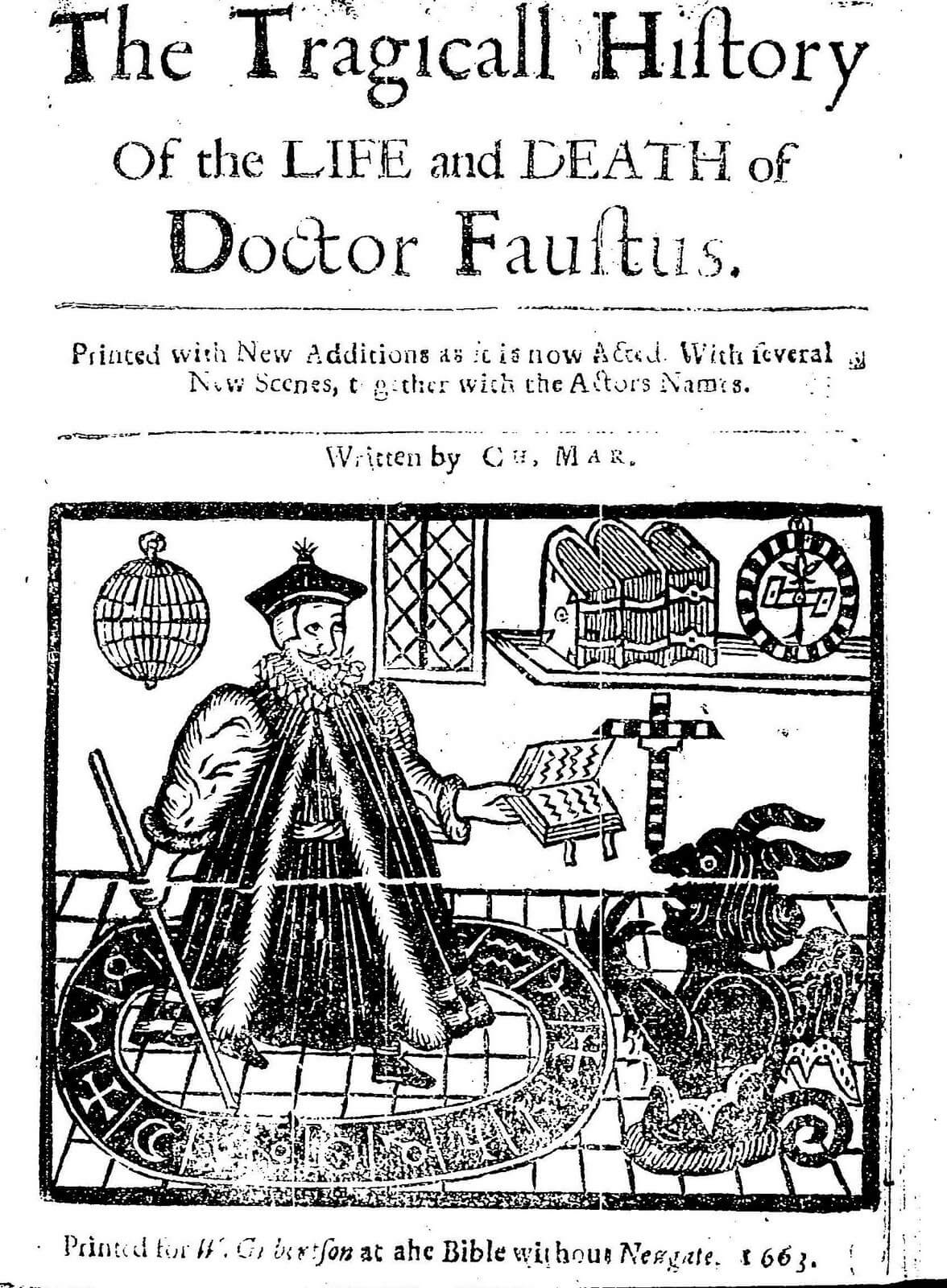 Usually has a noble character as the tragic hero
According to Sophocles, the character must be born as noble blood
However, tragedy has evolved so a character can have ‘noble’ traits in terms of personality such as Eddie Carbone from A View From the Bridge
Stories are often happening at the same day, same setting, same space

Hamartia - Tragic Flaw or a hubris, which the tragic hero suffers from; can be ranging from ignorance, arrogance, vice versa

Peripeteia - Reversal of Fortune, the climax of the story where the tragic hero cannot return to the normal state

Anagnorisis - The point of realization, when the tragic hero recognizes the nature of their actions

Catharsis - The tragic hero retributes the wrong-doings they have done with a punishment, including death

To the audience, a catharsis is known as a cleansing of the sins that are buried within a person

A tragedy is usually told within 5-6 acts, usually starting with a parados then ending with an exodus with a lesson learnt (told by a paean)

Paean - A praise of man

Etiology of Mephisto and Faust

Mephistopheles - a demon popular in German literature, evident in the tragedy Doctor Faustus
Mephistopheles is known as a fallen angel who has dark grandeurs

Faust - a doctor that turned into a necromancer, Faust was hungry for knowledge and power
Known to have suffered a terrible end due to his intellectual grandiose

In relations to Arknights, Faust or Sasha knew what Mephisto or Eno was doing was ‘wrong’ in the sense that he was tired from all of it. In a tragic play, there is always a tragic hero, however in this both Mephisto and Faust are the tragic heroes. With Mephisto suffering with the death of Faust, which becomes a point of no return for him and Faust dying in hopes to ‘forgive’ himself and the people who had sided with him. The interaction around the before story of 6-7 shows how Faust regretted his decision of not running away with Mephisto. Both Faust and Mephisto are severely infected with oripathy especially with the fact that Mephisto is against Faust in trying to risk his life. 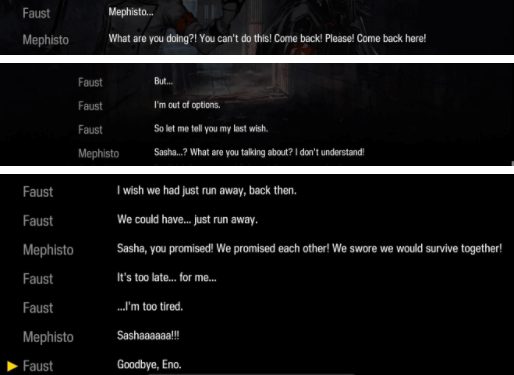 Mephisto’s journey has not ended yet but Faust’s journey has ended in a tragic way. Talulah in a sense acted as a messenger for Mephisto to be in his current state about the movement. Meaning Talulah played as the ‘devil’ which Mephisto wants to gain more power and knowledge. With the death of Faust impacting him, Mephisto will go through the tragic arc in a similar fashion to Faust. While Faust joined the movement, he was also learning how to work within a battlefield, taught by Frostnova and Patriot. The people within the movement knew how kind and noble of a character.

This is noticeable within the after story of 6-7. When the Phantom Crossbowman and Reunion Member had a conversation about Faust’s passing, it was evident that both of them knew how noble Faust was. 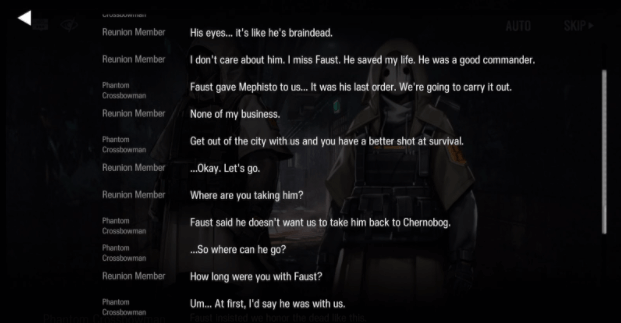 The fact that Faust taught such manners in terms of honoring the dead as well how he worked hard, everyone knew that the death of Faust was devastating. That includes the Rhodes Island Operators as well, knowing that Faust died was a heavy blow for Blaze. This was the catharsis for Faust. A cleansing for those who knew him and a huge ‘mistake’ on Mephisto’s part. The fact everyone learned that they should take care of Mephisto because Faust gave them those orders is a sign of respect.

In a sense, Faust plays a much more similar role to Mephistopheles in the play while Mephisto plays as Doctor Faust, however the ending stayed true to the origin. Faust gives out ‘warnings’ and tells Mephisto on what to do. Which was the role of Mephistopheles within the play that Doctor Faust’s hunger for knowledge is dangerous. While Mephisto kept on doing such deeds due to the fact that he is blinded by “arrogance and ignorance”.

Both are doomed to suffer such an end due to the fact Faust and Mephisto are on the same sibling boat. Despite that, Faust still wishes to help Mephisto because they have a bond that only can be understood between them. The fact Mephisto cried until the “life” within his eyes were gone when Faust went out in 6-7 shows how much Mephisto depended on Faust. Especially with the fact Mephisto could not make decisions on his own sometimes.

This concludes all the non-spoiler content for global. Chinese server spoilers ahead for the rest of this article!!

Can't believe Mephisto and Faust are back again in Chapter 8. There was not much in Chapter 7, other than Mephisto grieving really hard for Faust and then going into the sarcophagus. And this is where further tragedy begins.

With the new chapter on Arknights, we are given a song and a tragic result of Mephistos. First of recapping what a tragic arc is, the hero must go through the realization of their actions after all of their wrongdoings, to repent, they must sacrifice themselves for the greater good. Mephistos who suffers from the loss of his only best friend and someone who he views as his older sister (Frostnova). With chapter 8 being a hell hole it is, Mephistos was in the sarcophagus and turned into a songbird that was in extreme pain. Waddling like a newborn that just came out from its shell except it was all alone. In a sense, this fulfills the tragic arc because Mephistos gains some pity from the audience and the characters for his sacrifice. Mephistos went through a Catharsis and either you can let him go or end up killing him entirely for being a ‘monster’. 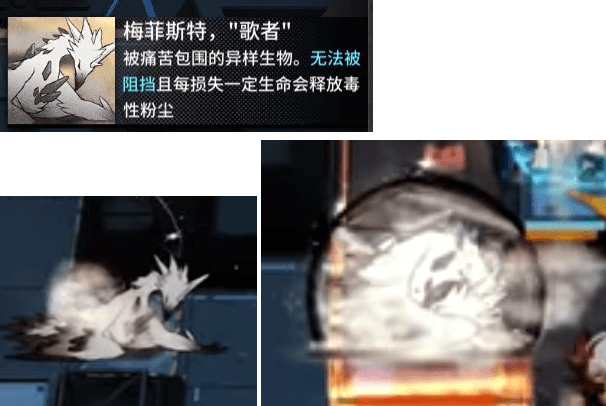 Anyway, here's a translation for his Chapter 8 enemy description:
Mephisto, 'Singer'
A strange organism surrounded by pain. Cannot be blocked and will release poisonous powder when losing its life. 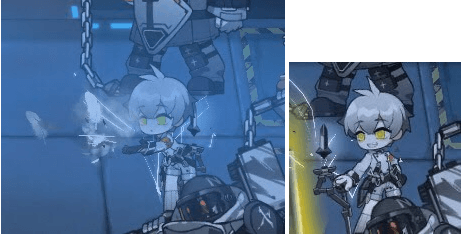 The bird form looks like when you see a newborn bird without any guidance, this is actually really pitiful, the wings are too heavy for the bird to fly, there is no freedom and Mephisto has sunk too deep in his own ‘issues. Plus that white thing on top of the birds head seems to be Mephisto's Arts.

Lullabye, which also happens to be M8-8’s bgm (for Mephy’s second phase), is actually a play on words of “Lullaby” and “bye” (who would have guessed lol!). To explain what a lullaby is, it is a simple song that is often used to put infants and even adults to sleep due to its chords and simplistic scale. Lullabies are often used to convey feelings of affection and love towards the recipient. That said… this song is rather a sad one. “A good night and a farewell” is a phrase I would use to describe the meaning of Lullabye. From the view-point of the song, it seems to be related to Frostnova as if she was the one who came up with that song.

Lyrics translated by me from the Chinese lyrics:

Sleep, sleep,
My dear baby
Close your little eyes
Forget your tears
In dreams, you will see
Adventures that makes you scared
Child, how much will you grow
Or who will protect you by your side?

Baby you don’t need to be afraid
No matter who is howling, or calling you
Wipe your tears dry
Then sleep bravely

From the song lyrics, these few phrases were often recited:

I want to sing you a lullaby
Good night, good night
The earth turns gently
Close your little eyes

These words are very familiar within the story for Chapter 8, where Frostnova wants to sing a lullaby to Mephistos to help him sleep. This here is the sole proof that it could be a “call-and-response”. Now you might be wondering why and where the “bye” is in this song. Well, the implication: “...good night// The earth turns gently// close your little eyes.” is a sign of an incoming death.

Another thing to note is how the second phase of the boss tries to close its eyes and this weird dome thing appears around it. It is as if the ‘dome’ was the earth and the bird was trying to close its eyes to finally sleep once more. This relates to the lines: “The earth turns gently//close your little eyes” because the bird tries to close its eyes by shielding them with its wings as the black dome appears. Mephisto was always haunted by a lot of things including his own past. To forget everything and the pain, he encloses himself before if you broke him out from that dome. The moment you break him out of the dome that encases him, everything comes back and haunts him. No matter what, the only safest place he will have is when he is resting. In the story, he sang something in tribute to his final words and how his suffering will never end.

Also, this is the EP's introduction:
I arise from whispers of thee,
In the first tranquil slumber.
As the memories are burning low,
And the pasts are shining pale,
I chant with the Lullabye of thee.

Alas. Long may the dreams shimmer.

Transcribing the meaning leads to:
From my very first slumber,
I was awakened from your whispers.
I chant this lullaby of you as my memories and past fade away.

May this dream last forever.

This seems to be a ‘response’ to the call (aka the original song) aka this is Mephisto's point of view. Plus it seems like the ‘person’ in this passage is actually ‘dying’ because everything is fading away. So this could be related to what Mephisto had sung when he was dying with all that “... Goodbye Sasha…” stuff. This lullaby must be the lullaby that made Mephistos feel comfort if it was that important to him.

The story of Mephisto and Faust is a truly tragic story that has even more meaning when we make references to literature.

No matter whether you like them or not, especially Mephisto (who is the centre of lots of discourse), his story is definitely sad. Does it end at Chapter 8? Let's see what Hypergryph has in store for us.

Heads up: Mephisto and Faust bashing is not welcome here and will be ignored. I however, welcome more analysis.