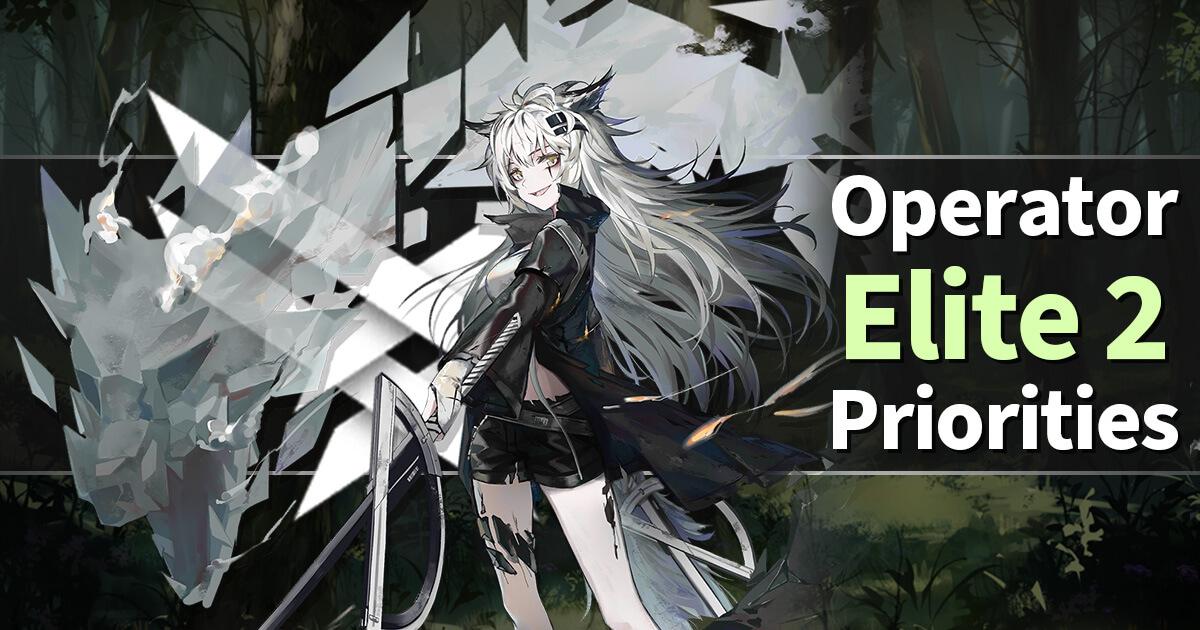 TL;DR Note: This guide is NOT A TIER LIST, nor a ranking from top to bottom of order to E2.  It is a categorization and discussion of what Operators gain at E2 that, when considered along with a player's specific roster of Operators and team composition, can be used to help determine a good promotion priority.

A full Tier List based on maximum Operator performance can be found here:

The decision of which Operators to promote to Elite 2 is not one to be made lightly. The final promotion step can be quite expensive, both in materials and LMD. Thus “Who should I E2 first?” and “Who gains the most out of E2 Promotion?” are common questions among players, and ones we hope this guide can help answer.

Before diving into the E2 details, we want to stress again the importance of team-wide balance in strength and covering important roles. A mistake many players make is focusing too much on 1 or 2 Operators for development. A well developed roster of E1 Operators that cover many roles will allow players to be more successful overall than a small roster with few options and 1 or 2 Operators at E2.

Operators also see far more improvement per resource spent at lower levels, so you will see more overall return on investment if you spread them out between your strong Operators.

Enough with the boring lectures we don’t want to hear!  Let’s move on to the shiny E2 information!  Operators of rarity 4★ and above can be promoted to E2 (so ko-ko-da-"NO E2" for those lovable 3 stars).  All Operators that reach Elite 2 gain access to the final 3 Skill Levels through the process of Specialization (Mastery).  Each will also gain extra abilities or improvements to existing ones, depending on their rarity.  Here is what each rarity level gains upon promotion:

Due to the high costs of E2 promotion, players must choose carefully which Operators to promote, and the order in which to promote them.

The first consideration to be made is one of team balance and composition.  Which Operators you have and which ones you already have developed/promoted will play a role in which order is best to E2 your Operators.  In general, DPS units are good choices for early development, followed closely by tanks and Vanguards.  The upgrades of these types of units will make direct and immediate impact on the board.  After that, healers and then other types of support or niche units can be developed, as their strength relies primarily on the units they are healing or supporting, and niche units have less broad an impact.

The second consideration is what your Operator stands to gain from the Promotion.  Higher rarity Operators get more new toys upon Promotion than lower rarity Operators, but they pay for it with significantly higher development costs.  Also, sometimes quality is more important than quantity when choosing the toys you want to play with.

A third consideration is how quickly the player needs/wants a return on the investment spent.  For some Operators their new toys make an immediate and noticeable difference, while for others it is the further investment in Skill Mastery that makes them shine.  For still other Operators, the E2 benefit is more about the raw stat gain with higher levels rather than their new toys.

With these considerations in mind, we will discuss Operators that are good candidates for E2 Promotion and group them by the following categories:

Her Talent, Skill Point Halo, makes Ptilopsis one of the most widely applicable Skill Point Batteries, as it increases the SP regen speed of everyone on the team that has a per-second charge Skill. Her E2 doubles the bonus, doubles the flavor, and doubles the fun.

The main draw for promoting Elysium to E2 is causing his Sniper Support Talent to reduce the DP cost of all Sniper Operators by -2 instead of -1, and, while his skills are active,  to increase the ASPD of all Sniper Operators by +20 instead of +10. He doesn’t get a whole lot out of M3ing his Skills, but the main benefit—reducing their SP costs—allows him to generate DP earlier in a battle, which is always good.

3rd Skill – Divine Avatar – Increases Blemishine’s ATK and DEF, deals bonus Arts damage when attacking, and heals a nearby ally every time Blemishine attacks. This flashy Skill is very satisfying to use, but be careful: the healing cannot target Blemishine herself. Either keep another healer on Blemishine when using this Skill or position Blemishine to the side of powerful enemies rather than expecting her to Block their attacks.

2nd Skill – Deterring Radiance – At M3, Deterring Radiance’s ATK buff and regenerative healing both increase in strength. Best of all, however, the SP cost for the Skill decreases from 16 (Skill Level 7) to 12 (M3). Deterring Radiance has the [Getting Hit] SP charge type, so even a small SP cost reduction can mean the difference between having the Skill up when you need it or having to wait for another wave of enemies to enter the field. 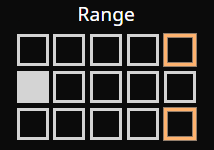 Beat them with the Stat Stick

A 5★ Operator that gains an additional Talent at E2, Thunder Resistance makes her one of the few non-Healing Defenders to have innate Arts Resistance, though the main reason to E2 her is the benefit she receives from the higher stats.

His mission is to destroy everything that dares enter his range, and promotion to E2 significantly helps him with that.  His Talent increases its Defense Penetration, and his already high ATK stat can be raised even higher.  If this cool customer is part of your strategic lineup, he will see excellent benefits from promotion.

On top of having a calming, cleansing scent, Perfumer’s Lavender Talent heals all allies on the field every second based on a percentage of her ATK.  This can be extremely useful on maps that apply a Damage-Over-Time effect to all Operators, for giving support to Operators outside of Medic range, or healing Operators that cannot be healed directly(e.g. Vulcan or Hellagur).  With her Skill 2 active, or other ATK boosts, the amount of healing can be quite impressive. Reaching E2 improves the ATK% from 3 to 5%, a nice increase.

Because Niche is Nice

This fluffster is one of the only 5★ Operators that gains an additional Talent upon reaching E2.  The Bell Tolls Twice allows her hit 2 enemies with each attack, effectively doubling her normal damage when multiple enemies are present.  Her first Talent, Weakening, also has the power of its [Fragile] debuff (a rare Damage Taken Increased multiplier) doubled.

In a similar vein to her Vanguard counterpart Zima above, Texas’ E2 promotion enhances her ability to handle fast starting Operations.  Her Talent, Tactical Delivery, starts the team with 2 DP at E2 (up from 1 at E1).  Although this doesn’t seem like much, it can make all the difference when it is needed.  Players will likely be using Zima, Texas, or both, regardless of who else you have, so improving their starting conditions and stats is a solid investment.

At E2, her Pegasus’ Halo Talent increases the healing of all allies on the battlefield, which is a great team-wide buff for maps with high team-wide healing requirements.  It is a particularly welcome addition for Challenge Operations that prohibit Medics, as it lends a lot of extra healing power to units like Saria or Sora.

Another Operator whose Talent is core to their mechanics. The number of Meebos that her talent Robotter allows to be deployed increases from 4 to 5, a significant increase if you want to use this one-woman-army to her fullest potential.

Silence
A popular Medic Operator because of her cute glasses AoE Healing drones that allow her to reach any corner of the map, E2 not only grants her the ability to enhance her stats, but also doubles the ASPD buff she gives to all Medics with her talent, Booster Injection.
Provence

The fluffy-tailed Sniper who preys on damaged enemies, Provence doubles the multiplicative attack buff gained by her Talent Hunter’s Arrow when she reaches E2.

As an Operator outside of the Sniper Class that will prioritize targeting Drones and aerial enemies, Glaucus can be useful in situations that forbid Snipers, or against Drones with high DEF.  Her Talent, Countermeasure Device, increases her damage to Drones, and this effect doubles upon Promotion to E2.  Her S2 can also be a very powerful crowd-control tool, and developing it to M3 increases its duration by 1.5 seconds.

Cyferous
(ﾉ◕ヮ◕)ﾉ*:・ﾟ✧ Pretty much just a lurker at this point.

Support Normal +alter
I didn’t know we can have the normal version of an operator and his Alter as support…
Buy Tequila's Tokens without Tequila?
First, I’m a new player (around 2 weeks old as of now) and I’m currently farming…
Bored Dokutah Chronicles #59: Ling’s supremacy, pot 6 M9 is guaranteed, best Nian beast
Well; you all know the drills, let’s get wild for the last week of Dossoles Source …
Duelist Guards , DP Eater Specialists and Ling's module data
i separated the duelist guards module into 2 by myself (tweets aren’t mine btw) the…
Low Star Alters [Poll]
May as well keep the ball rolling This one is for the 2 and 3 stars you think will…
Read More