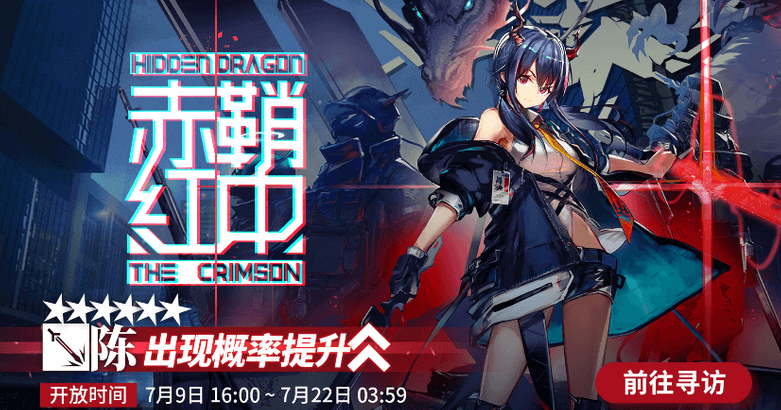 UPDATE: Ch'en is now official! For all the details of the upcoming event, look here:

These are indeed the questions of the moment.  Many players were thrilled that the chance to get Eyja, Ifrit, and Lappland came back to us, at least the ones that hadn’t given up hope and spent their rolls for Skadi instead.  But the next big question still looms: When will the Ch’en banner happen so I know if I should roll for Eyja or save for Ch’en?  The Ch’en Banner, The Crimson Hidden Dragon can be seen here, and introduces new Operators 6★ Guard Ch’en,  5★ Guard Swire, and 4★ Caster Greyy.

The main rumor at the moment is that the Ch’en Banner will arrive or be announced in two days.  This is based on this JP Arknights Twitter Post:

Which, according to Google Translate, says roughly: Countdown 2 Days “What is ... The source stone <originium> is getting more scratches ... "

With the following image:

Players are noting how similar these red slashes look compared to the red slashes in the Ch’en banner image above.  Also, if you go to the JP arknights website, you’ll see an intro screen also showing these red slashes cutting through Originium.  It is not surprising that many players have been guessing this is a countdown to a Ch’en banner release or at least an announcement.

Another thing many players are pointing to is that the Ch’en banner was released at the same time on CN as the Sign-In Event awarding Perfumer’s Skin, which will be starting in 2 days on global.

There have also been rumors about some datamine confirmation, with this image being shared.

Will these rumors turn out to be accurate like the ones for the Eyja Banner?  Or is it a poor guess that will just lead to disappointment?  Only time will tell. Want to test your luck for the Ch'en Banner? Try out the Summon Simulator!

So what’s all the fuss about Ch’en? Well, for starters, being a strong presence in the early Arknights story has made her a fan-favorite and popular waifu choice.  On the gameplay side, Ch’en has a unique, diverse, and exceptional kit. She can help some allies gain SP faster and can fill multiple roles, all very well, depending on the Skill she chooses for battle.  Her options include Crowd Control, burst damage, on-deploy assasination, and Boss Killing, among others. For more detailed information about Ch’en, check out our Ch’en Overview or this video by Peacecow.

For more Skins, you can check out our Work-In-Progess and growing Skin Art Gallery