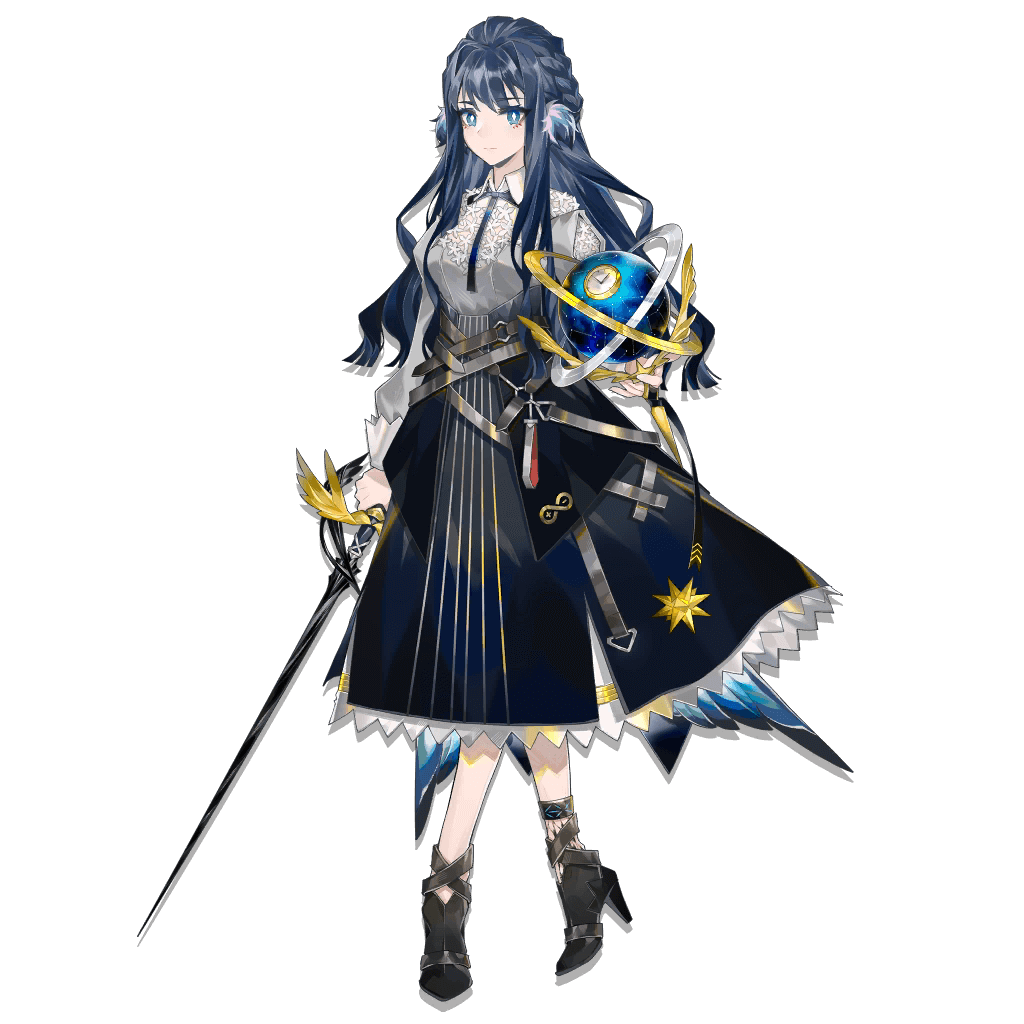 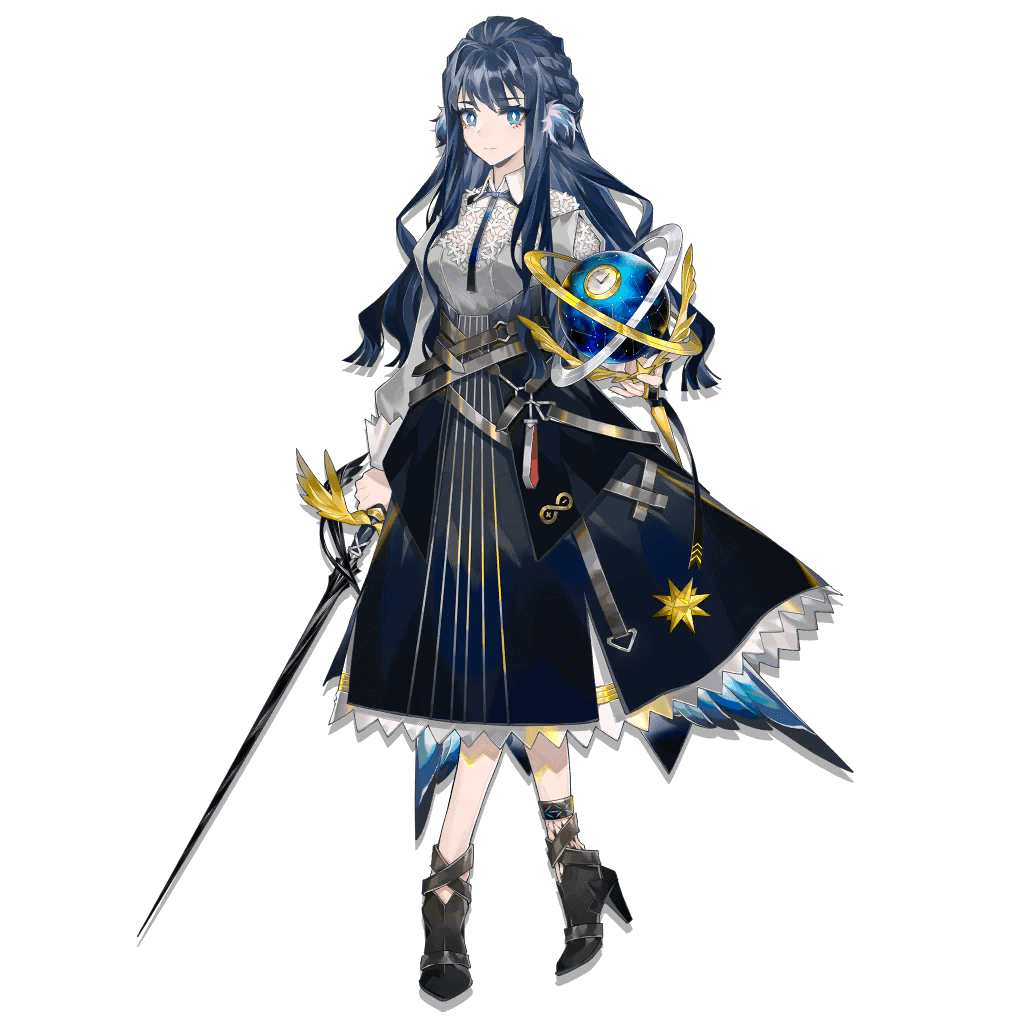 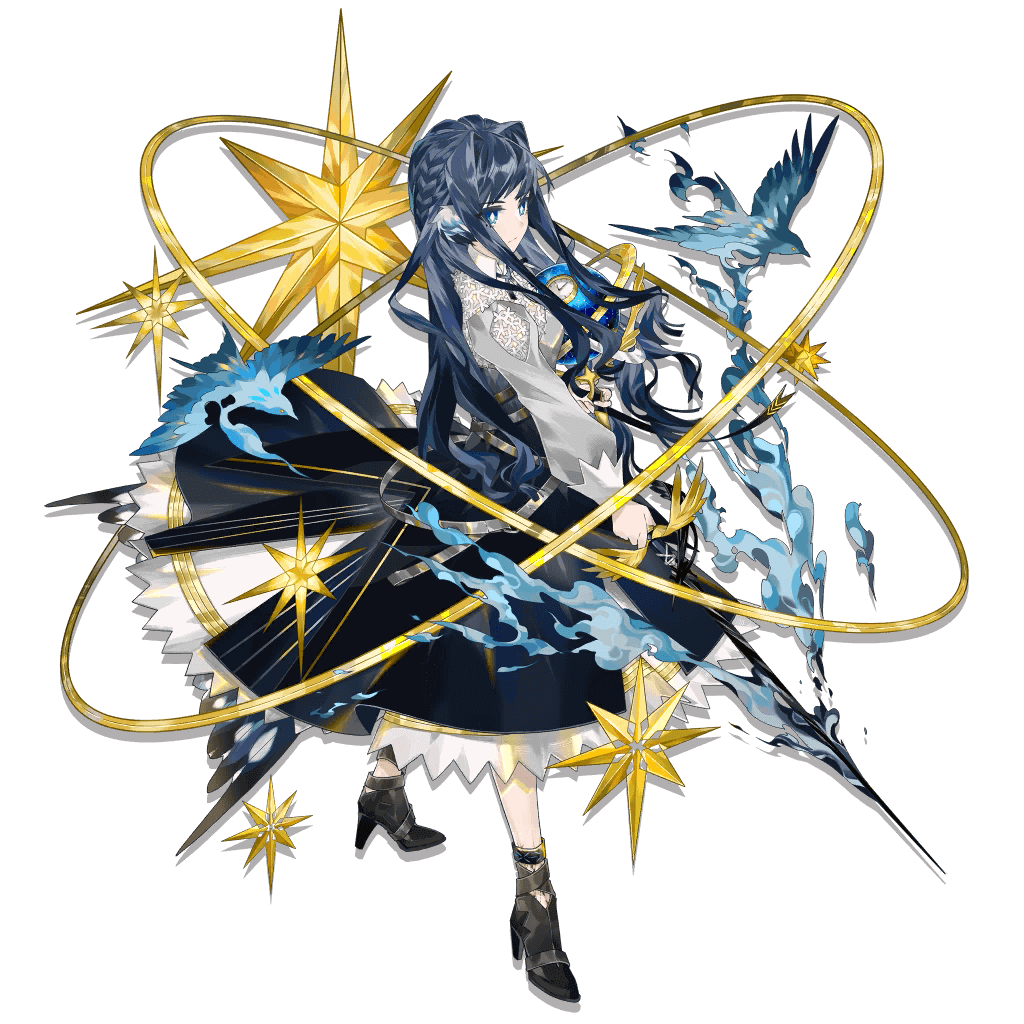 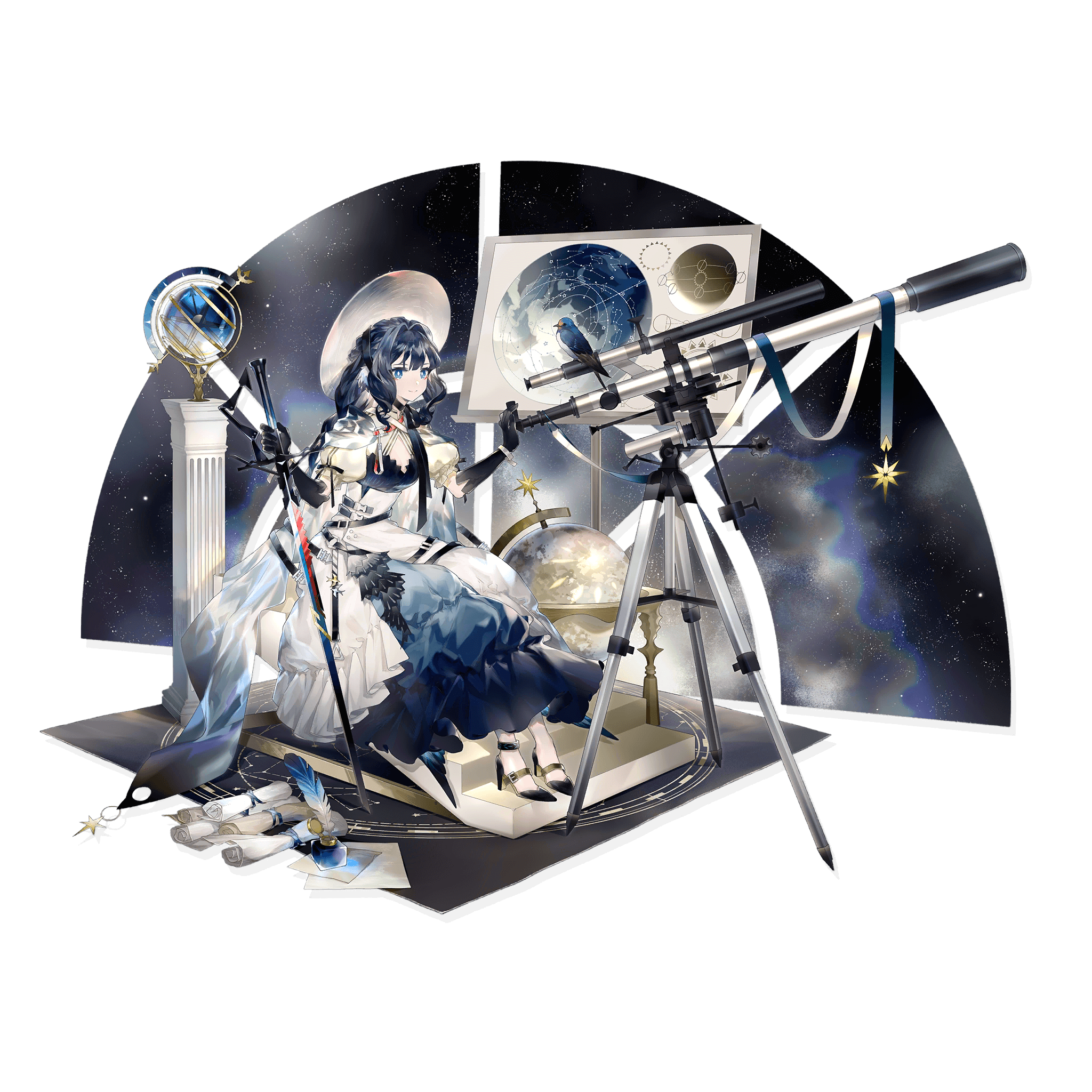 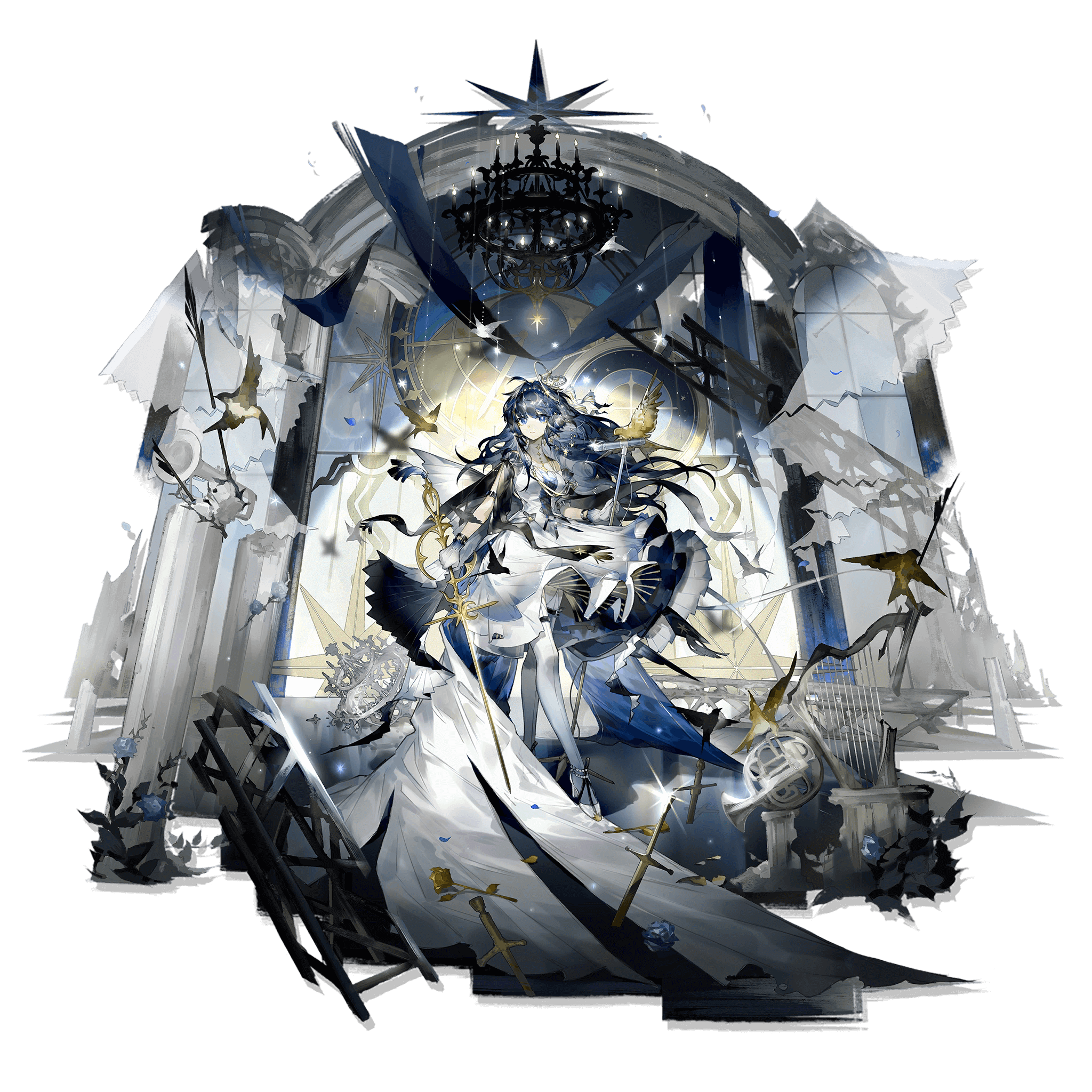 Astesia, Guard of Rhodes Island, has summoned the power of the stars to hold the line.

She is the boundless starry skies, as well as your personal alarm clock. 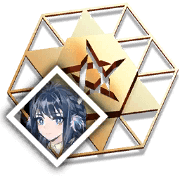 For every 20 seconds Astesia stays on the battlefield, ASPD +3, stacking up to 5 times
Info
Celestial Globe
Lvl: 1

For every 20 seconds Astesia stays on the battlefield, ASPD +5, stacking up to 5 times
Info
Talents from Module Upgrades

When this Operator is assigned to the Reception Room, Clue search speed increases by 10%
Astrology Lvl: 1

When this Operator is assigned to the Reception Room, Clue search speed increases by 25%

"The night is over and the stars are about to fade. If this is the end of everything, I should start doing something meaningful. Such as? Well, do you mind me waking you up every morning, Doctor?"

Astesia thought she knew everything about the future from reading the stars with her family’s knowledge of astrology. However, her confidence was shattered when she and her sister were infected with Oripathy and had to be sent to Rhodes Island for treatment – something she had not seen in her predictions. As part of her bid to reclaim her future, she now fights for Rhodes Island as a 5* Arts Guard who deals Arts Damage and is particularly adept at Defense.

When you need an Operator to duel high-DEF foes to the death, Astesia is ready with either of her Skills, both of which increase her ATK and DEF. Her Skill 1 takes longer to charge, but also has a longer duration, making it better for keeping Astesia alive against a single strong opponent. In contrast, her Skill 2 gives her +1 Block (at base she can only Block-1) and allows her to attack a number of enemies equal to her Block Count, turning her into an AoE Guard for short bursts of time. Astesia’s dueling prowess is further boosted by her ASPD-increasing Talent, which rewards the player for using her DEF buffs to keep her alive and on the field.

Especially when her Skill 2 is active, it’s easy to feel like Astesia can do anything. However, she does suffer from the weaknesses of her archetype when compared with other Guards: high DP cost, low base ATK, low ATK multipliers on her Skills, and innate Block-1. Despite this, she is simply stellar for countering difficult, high-DEF enemies. If you deploy her in the right time and place (and perhaps check her horoscope for good luck), Astesia can soar among the stars as an unstoppable goddess of battle.

DEF oriented, can't sustain blocking 2 enemies at once long enough if you need a consistent 2 block.

Astesia used to be in the main Mastery guide with solid grades, but her value has unfortunately plummeted since her release. Amiya's Guard form is superior to Astesia in most ways, and Amiya is free and must be raised to progress. That said, Astesia is a popular character and is still very viable. Her S2 is by far her better skill and it has pretty good Masteries to boot. In fact, it is almost strictly better than S1, which should only be Mastered for pure completionism.

Astesia gains her second RIIC Base Skill at E2. It is an extremely high Reception Room buff, but Astesia is not a particularly strong combat Operator, and is completely overshadowed by the abundantly owned Surtr.

Astesia is a member of a Columbian occult organization, serving as a philology consultant for Rhine Lab as part of a cooperation agreement. After contracting Oripathy, she and her sister came to Rhodes Island for treatment, where she qualified to become an operator. She uses unique sword skills to execute close range Arts attacks.

Increase Trust to 25.
Imaging tests have shown the outlines of her internal organs to be indistinct with abnormal shadows. Originium granules have been detected in her circulatory system, confirming her to be infected with Oripathy.

[Blood Originium-Crystal Density] 0.2u/L
Patient has an early stage infection at this point. Originium Crystals have not yet appeared on the surface of her body.

Thorough investigation reveals that this operator's expression of Oripathy is special, with very few similar cases. It is recommended that qualified medics perform treatment on a regular basis. Additionally, considering the bigger picture, Warfarin is strictly forbidden from accessing this operator's file and from participating in this operator's treatment. --Kal'tsit

Increase Trust to 50.
Astesia's family has a long history of occult study, with particularly notable skill in astrology. So it's only natural she was invited to join an occult society long ago. That group entered into a cooperation agreement with Rhine Lab, who then took her on as a consultant responsible for facilitating communication and various philology-related projects. In her free time, Astesia uses her own talents and knowledge to enlighten those more skeptical Rhine Lab colleagues. Over time, Astesia has become something of a professional astrologer and master of other occult arts. One fact known only to a few: the agreement between Astesia's occult society and Rhine Lab was of her own making, and due to one very important thing: her younger sister Elena, who works for Rhine Lab.

Increase Trust to 100.
Astrology is one of the oldest forms of divination. Like all divination arts, it gives insight into the present and can even provide a peek at the future. Astesia spent most of her time studying astrology, accepting its lessons and its burden of responsibility. So when she came face to face with Oripathy, she was frustrated to find this ancient art was of no use. She failed to divine that her own sister would contract the disease in an accident during an experiment, nor did she see that she herself would be infected during contact with that same twin sister. In that moment, all the plans she had laid for her future were smashed to pieces by the cruelty of fate. What she had seen as a shining future as bright as the midday sun was now too cloudy to accurately divine.

Increase Trust to 150.
Astesia and her sister were quickly taken to Rhodes Island for treatment. Diagnosis showed that while Oripathy had indeed manifested, it was still in early stages, and had not yet caused much damage to their bodies. The psychological damage to Astesia, however, had been quite severe. She began to doubt the stars themselves, and no longer had faith in the abilities she was once so proud of. During the course of treatment, Astesia took her sister's advice to join Rhodes Island.
Astesia is quite skilled with a sword. Her family has passed down a form of ceremonial swordplay: a ritual in which one hand holds a celestial orb, while the other holds an originium sword. The dazzling process of advancing, retreating, parrying, and riposting with these items creates the illusion of a starry sky fading in and out of view. This unique style of swordplay combines fencing, astronomy, and originium Arts into a form usable only by those capable of mastering all three disciplines. She has never before set foot on the battlefield, but with her unique skillset, she is confident she can serve as an effective Guard.

Increase Trust to 200.
'Over the course of our tests of Astesia's powers, one thing has become clear: her abilities are indeed an expression of originium Arts, as is clear from the readings on most of our instruments. And yet this expression remains quite different from most originium Arts. As far as we know, the connection between astrology and originium Arts is very weak, despite most illustrious astrologers in recent years all agreeing with a level of certainty on a close link between the expression of originium Arts and the celestial bodies. At this point we still have no evidence to support a direct or indirect connection, but we speculate that the emergence of these originium Arts that appear to be linked to the celestial bodies will further convince the common people of these beliefs. Were it not for these techniques, most people would likely return to the scientific explanations for originium Arts, turning away from astrology.
Back to Astesia, she has reported that she feels her own abilities are weakening. Our observations show that contracting Oripathy has had an effect on the originium Arts she already possessed. These effects will persist for quite some time, but we cannot say what the outcome will be, and whether it will be good or bad for Astesia. We need more time for observation and research. End of report.'


'There is theoretical value in this stargazing idea, but it has no practical application in modern science. The days when we could see the stars are long gone, and every twinkle of starlight we do get is like a stab in the gut.'

---Appears to be Dr. Kal'tsit's handwriting.

Upgrade to Elite LV2.
[Excerpts from an anonymous communication channel -- Regarding Astesia]
'Getting a reading from Astesia is great. You're surrounded by all these pretty stars. I could sit there all day.'

'I asked her once how her readings are always so accurate. She said she's just been lucky enough not to run into anyone she read wrong yet. Hm. Is that what all fortune tellers say?'

'The first time I went to train with Astesia, I thought she was gonna float like a ton of bricks. Boy was I wrong... she's definitely trained before!'

'Her fighting style, what can I even say about it, she closes the distance with you, then pierces you with those eyes that see straight into your soul... I'm not the kind of person who thinks much of fortune telling, but she definitely has something going on in there.'

'I heard Warfarin's all in a huff since she can't get her hands on Astesia? Is that true? Wild.'

'Her astrology reading pairs well with aromatherapy. I'd like to get her to spend some more time in the Convalescence Garden.'

'How does she do it? How can I make my originium Arts look as pretty as hers?!'

'My sister's dumb as a sack of hammers!'