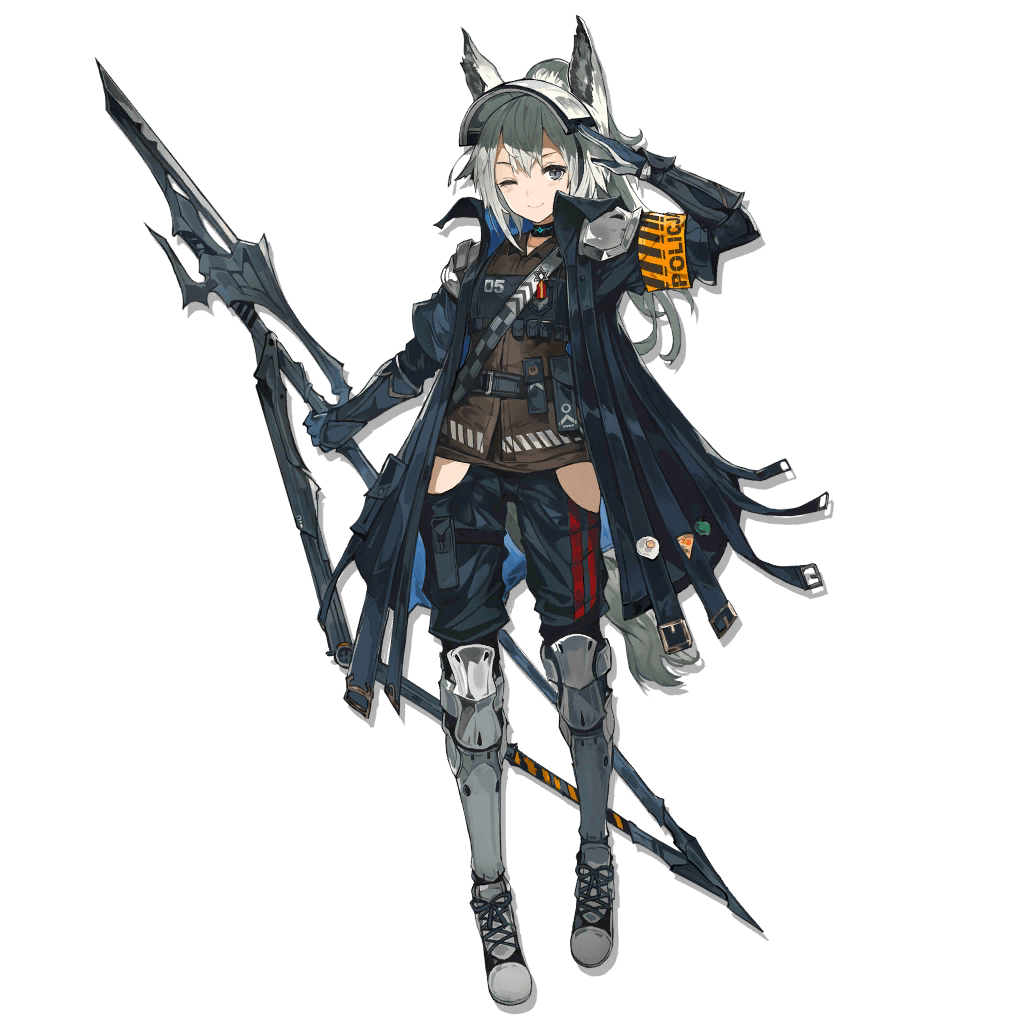 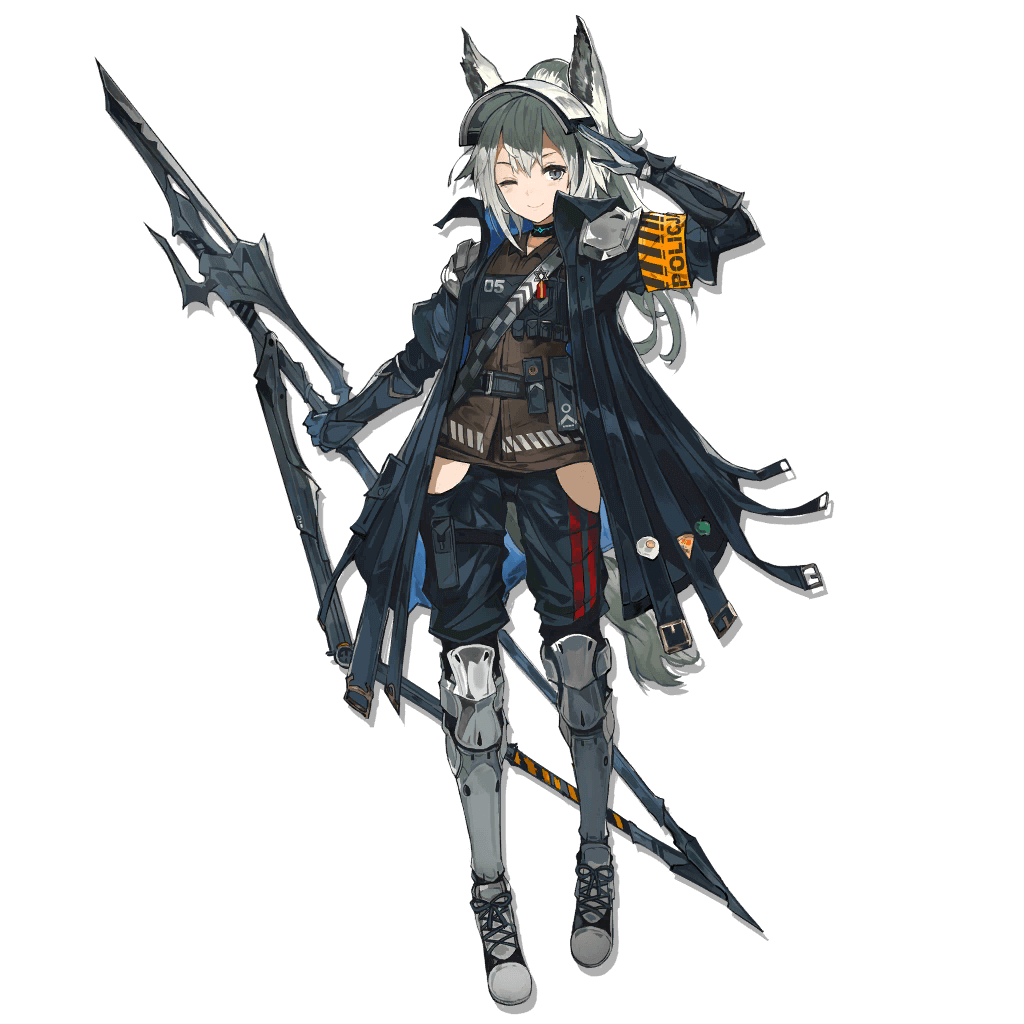 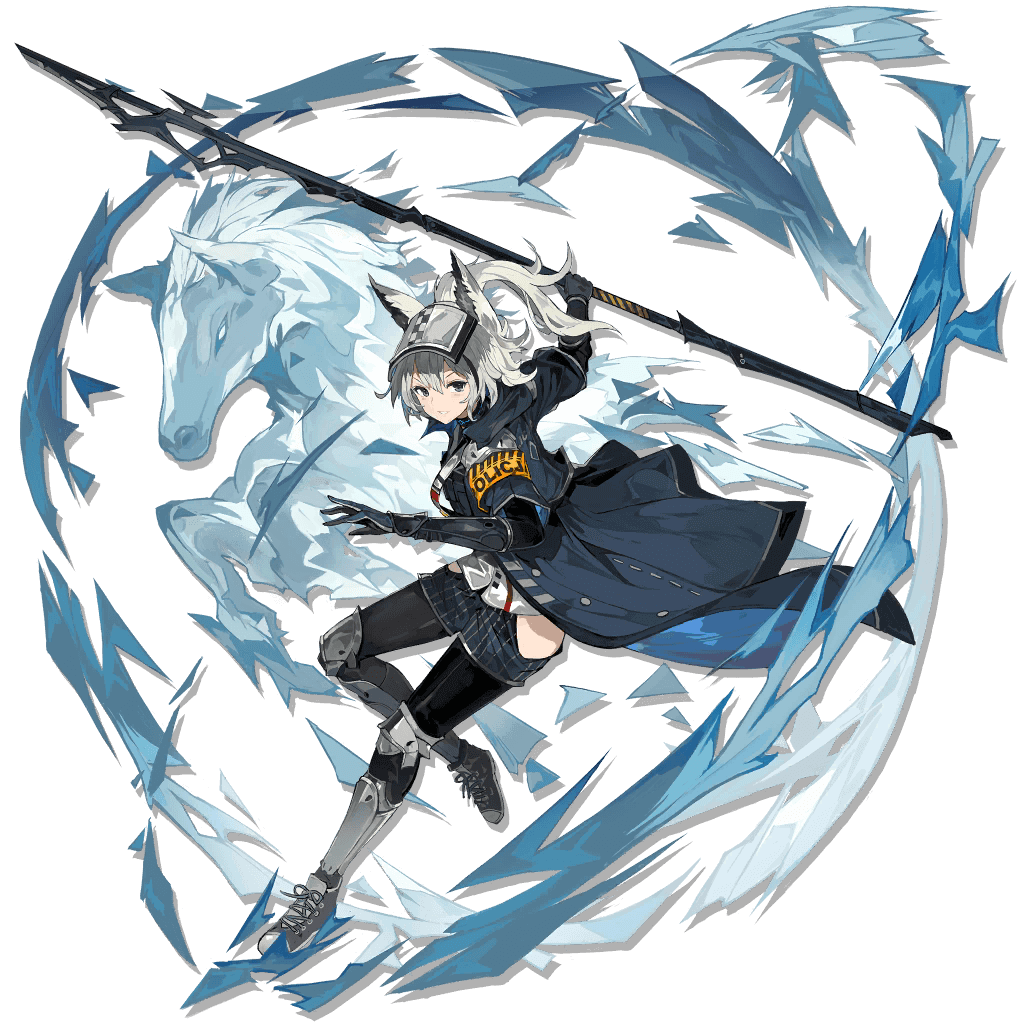 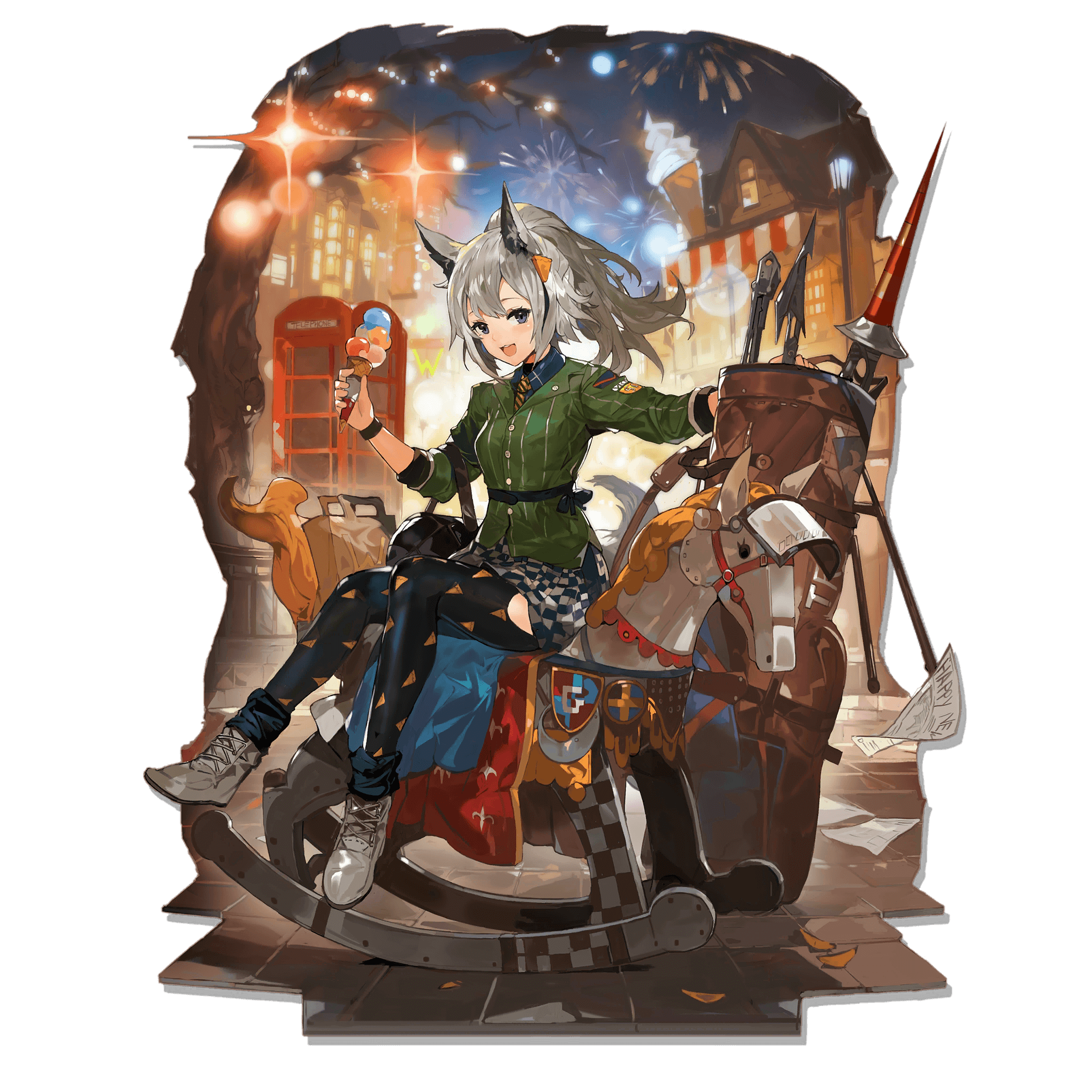 Grani, Vanguard Operator of Rhodes Island and mounted police, will clear all obstacles in the way using her lance.

She will fight to the end, for her dreams, and for you.

Event Reward
The Operator is acquired by completing specific in-game Events.
Obtain Approach Detail
From the Grani and the Knights' Treasure event. 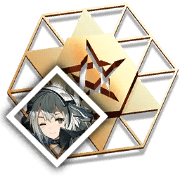 Grani's Token A red police whistle. Blow it and you will feel a sense of justice puffing up your chest.
Potentials

When this Operator is assigned to be the Trainer in the Training Room, Vanguard Operators' Specialization training speed +30%
Vanguard Expert β Lvl: 1

When this Operator is assigned to be the Trainer in the Training Room, Vanguard Operators' Specialization training speed +50%

- Defensive focus does not synergize well with her Dp-On-Kill mechanic.
- Can leak easily when her S2 is down because of 1-block base and weak killing power.

“Compared to everyone else, I'm pretty ordinary. I don't have any superpowers, or spectacular achievements to brag about... But I don't need magic or claws to make the world a better place. I can do that with my own two hands! Of course, we still have to eat well!”

This oft-underestimated overachiever has shown great talent and tenacity to succeed. Grani is a Kill-DP-Recovery and Defense Vanguard who obtains 1 DP on every kill and refunds her DP cost on retreat.

Grani’s stand-out ability is her Skill 2, Press the Attack!, which grants a strong ATK and DEF buff, increases the number of enemies she can block, and allows her to attack multiple enemies equal to her block number.  The Skill is ready fairly soon after deployment, which matches perfectly with her Kill-Recovery Vanguard role. She can be dropped on the battlefield, activate her Skill 2 to kill several enemies for DP, then be retreated when the Skill Duration finishes for a full DP refund.

Grani also has some support potential in Vanguard-heavy teams, as her Mounted Police Talent grants allied Vanguards evasion chance.  However, the random proc rate means it shouldn't be relied on.

Her defensive emphasis does not aid her role as a kill-recovery Vanguard, as they need to be able to kill enemies to have a noticeable impact.  Thus, outside of tactical use of Skill 2, players may find her performance a bit lacking. But when used with the appropriate timing, Grani offers strategic utility that can be quite powerful in the hands of an experienced Doctor.

For even more information on Grani, see our Operator Spotlight: Grani.

Having a defensive kit in an offensive archetype isn't a great idea.

Arknights: New Operator Spotlight - Grani: How Do I Use Her? Is She Better Than Vigna?

Grani, formerly of the Victorian Mounted Police, specializes in high mobility operations such as raids, mechanized warfare, and infiltration.
Now works as a contract Operator providing support for all Rhodes Island op teams, as well as patrols of the island and its surrounding areas.

Grani is in such good shape, even if infection was chasing her, it wouldn't be able to catch up...
--A Medic Operator

Increase Trust to 50.
Grani is a mounted police officer from Victoria. Her ancestors immigrated from Kazimirez long ago, but kept a form of cultural practice that predates the popularization of Kazimierzian knighthood. Despite growing up in Victoria, Grani wore Kazimierzan armbands, showing her fascination with Kazimierzan knights.
The mounted police was one of the law enforcement agencies present in Grani's hometown. It included officers from national, county, and city police forces. They are known for their well-practiced operations and broad jurisdiction.
Grani was younger, shorter, and smaller framed than her teammates, which was a subject of some ridicule from other officers. She found herself handling busywork and other trivial tasks, kept away from serious law enforcement.
Her first job was to help a citizen find a lost wallet. She ran through the streets, checking every alley, asking everyone she came across, until she finally recovered the wallet from a gang member.
Grani never cared that her work was trivial, and she never sought promotion. She just wanted to patrol the town and help people in need.
Before long, the Mounted Police received a letter commending her efforts. Soon, a second letter came. Then a third, and even a public award. But when the people became accustomed to Grani's work, the stream fan mail slowed down.

Increase Trust to 100.
While she lacks combat experience, she never rushes into a battle without thinking first.
In most cases, she will analyze her target, the situation, the number of opponents, their skill level, her available tactics, and then wait for an opportunity to execute her plan.
Grani's flexibility in large-scale combat, as well as her speed make her an excellent choice to carry out Rhodes Island's tactical maneuvers.
She is incredibly cooperative in deployments, keeping to Rhodes Island's orders.
In addition, Grani excels at fostering esprit de corps and boosting morale. She is always positive and promotes unity among Rhodes Island's diverse staff. Most everyone is eager to work with her. She has had an overwhelmingly positive impact on the company.

Increase Trust to 150.
Grani has received a lot of positive feedback on her work with Rhodes Island.
Grani was once part of the support team in a mission where Rhodes Island Operators were pursuing rogue mercenaries across an open plain. Grani demonstrated her incredibly mobility in this battle, successfully raiding the enemies, intercepting and trapping the main target to buy a time for her teammates.
Grani has also executed Originium escort missions for Rhodes Island. During one such deployment, she fended off a large group of interceptors threatening the convoy.
The list of her impressive accomplishments is long, given her lack of experience.
Grani once lost contact with her combat squad while clearing brigands from a mountainous area. The complex terrain wrought havoc with their communications signals.
When the squad finally found Grani, she had ran the bandits off on her own.
She took the initiative when fellow Operators could not arrive before the raiders began looting a village. She devised a plan to buy time, using the town streets and houses to mitigate the attack. She eventually forced the bandits to give up.
However, when she went to rescue a child kidnapped by an outlaw, she took a hit to her left arm.
After returning to Rhodes Island, the Operators discussed her course of action: 'She continued pursuing the enemy, but did she violate the directives of the operation?'
They came to the conclusion that while she did break some rules, without her efforts, the mission would have failed.
Grani made the right call.

Increase Trust to 200.
Grani needs to gain more practical combat experience. It would help her to have more control over her engagements. She must also build up her physical strength.
Grani has some advantages over her peers, but they are insufficient.
I hope to see her deployed on more operations. At her current level, she will have a hard time reaching her goals.
She faces many challenges, but she must not be kept out of danger. It's her life.
She won't give up, no matter what.
That's the only thing I worry about.

Upgrade to Elite LV2.
Grani's Cavalry Pike
Manufacturer: Royal Dell Arsenal, Highbury, Londinium, Victoria.
Product Code: L-886
Length: 1.58m-3.03m
Grani's light rifle has a collapsible design and can be used as a short spear before unfolding. It also folds out to a standard light rifle.
As a police weapon, it cannot penetrate heavy armor, but is able to inflict serious damage to anyone who underestimates it.
The pike is humorously out of proportion to Grani's small stature and thin frame. It does not appear well suited to her.
Still, Grani loves her pike and has trained extensively with the weapon.