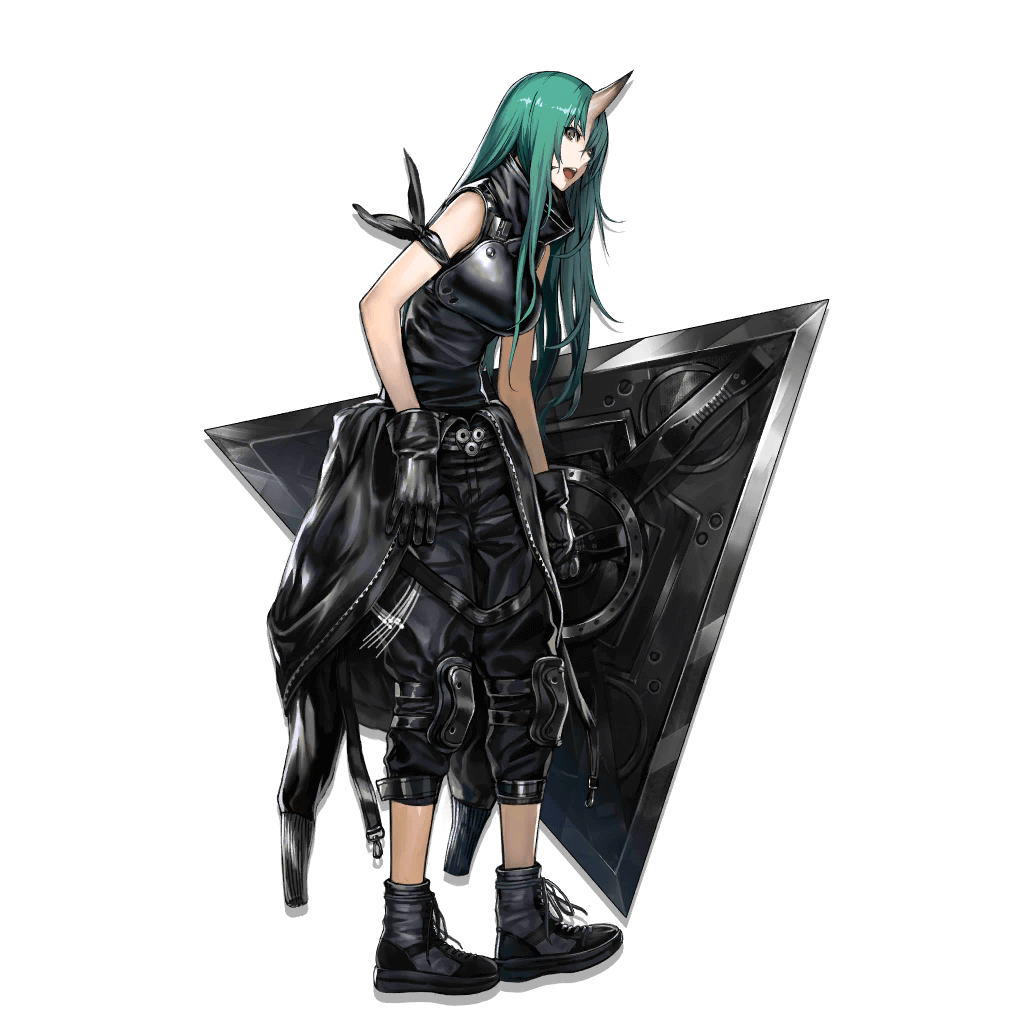 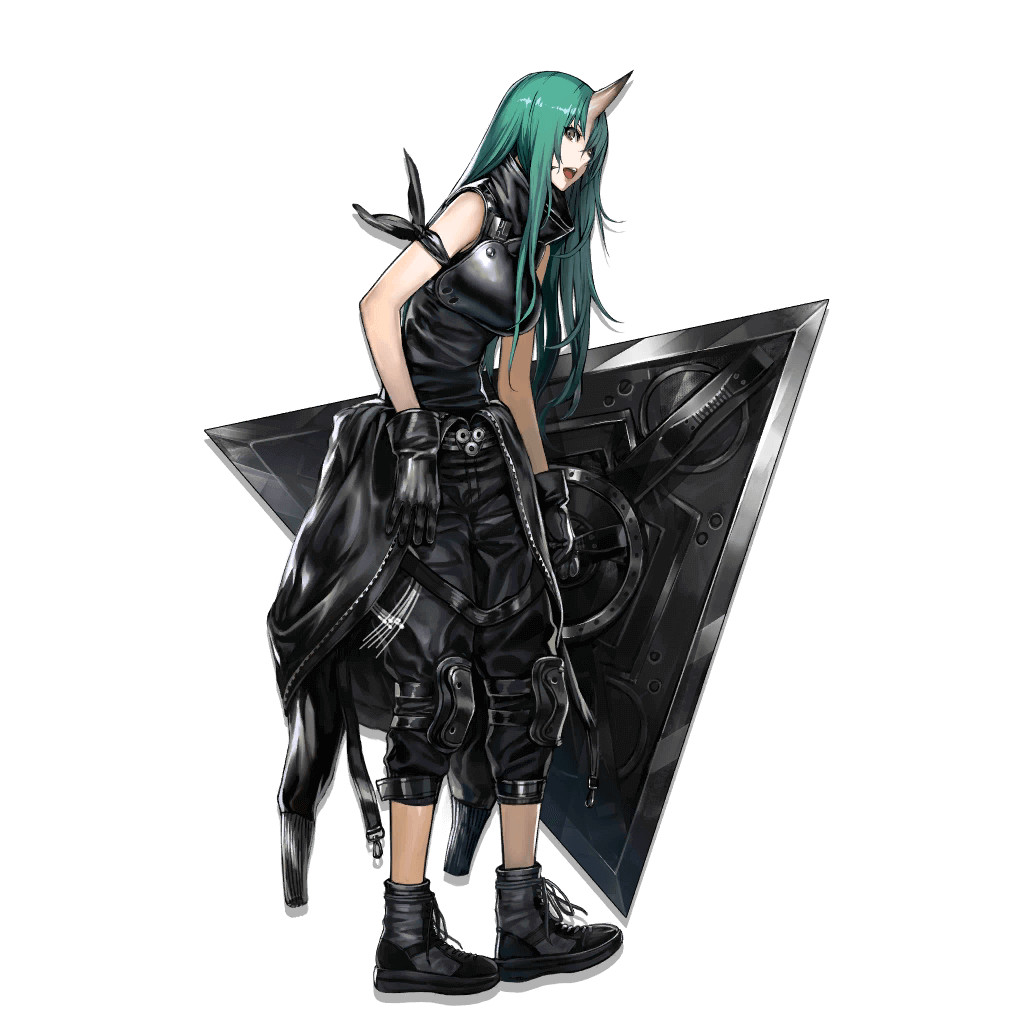 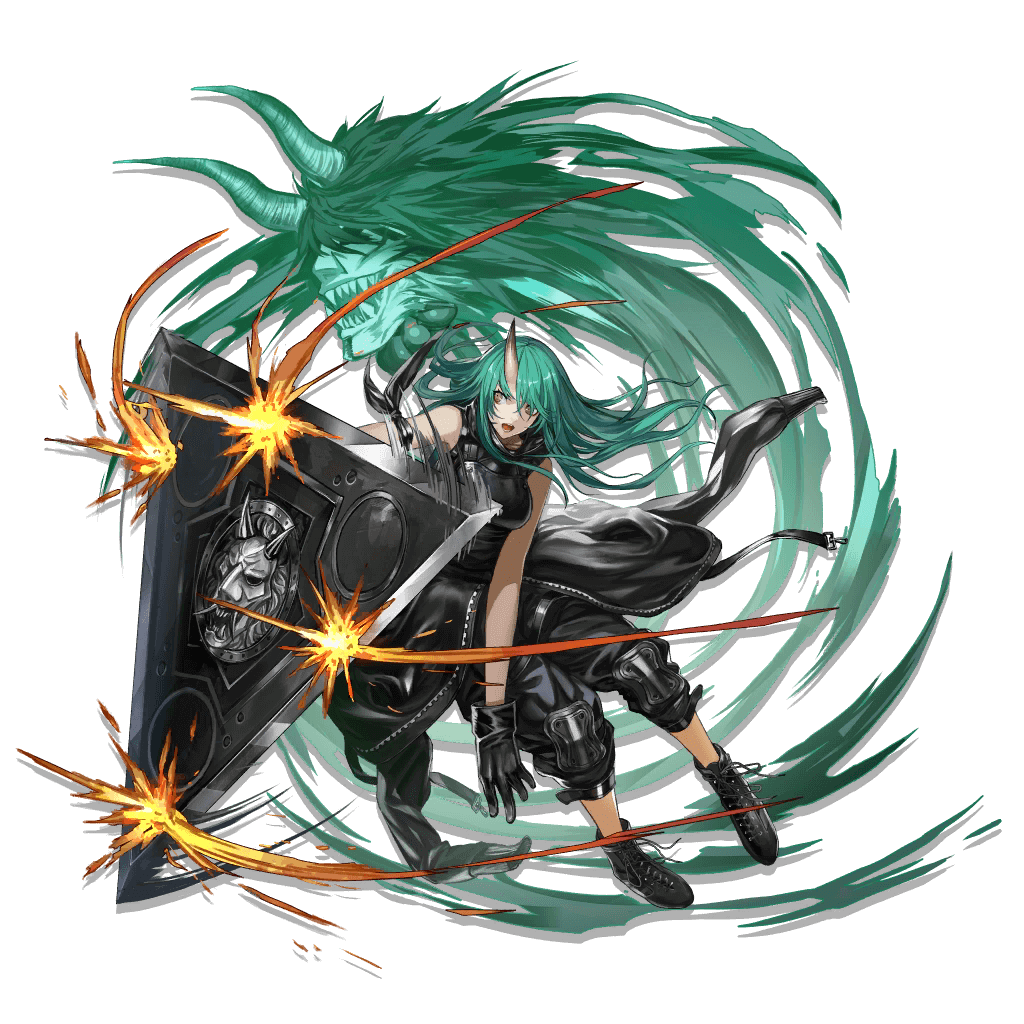 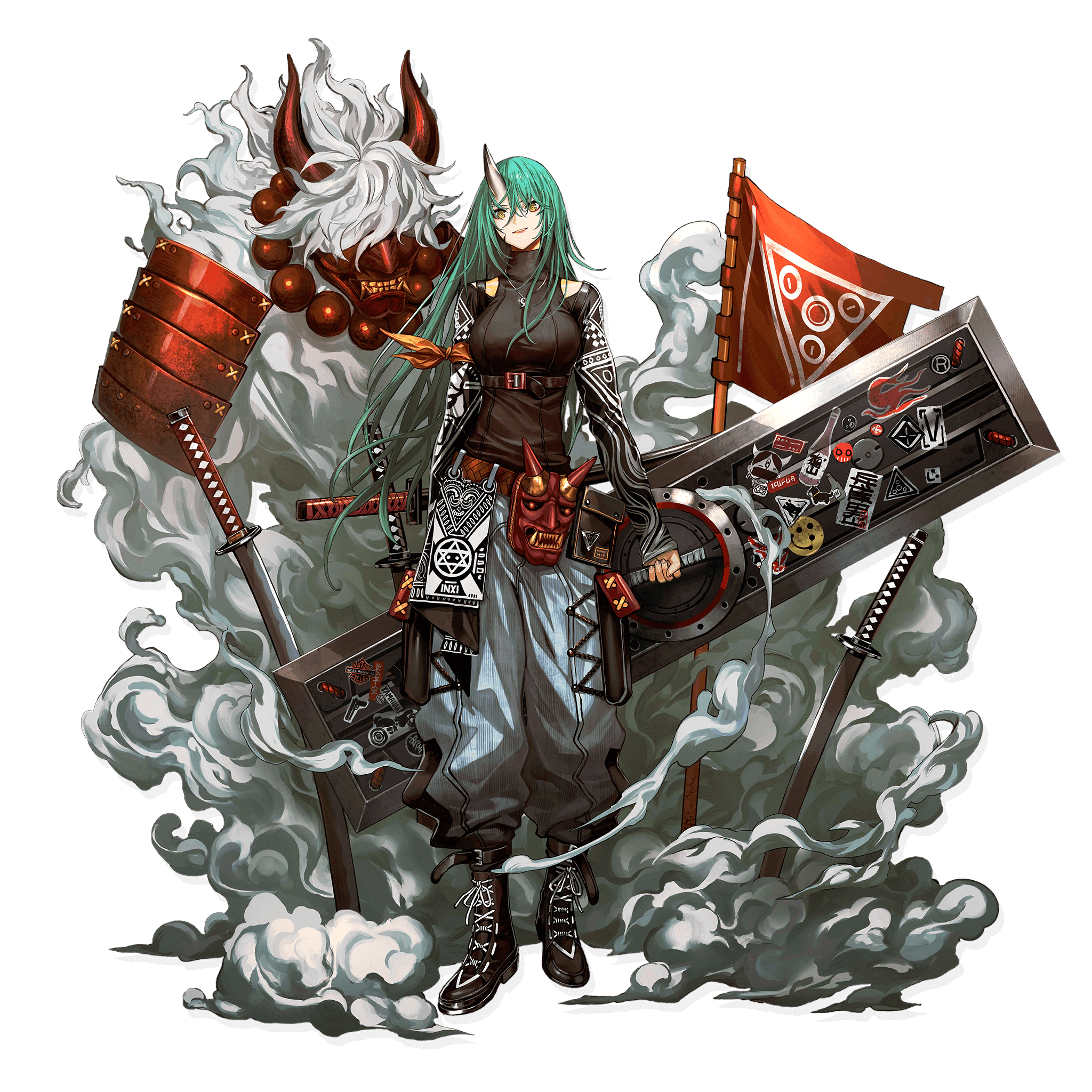 Hoshiguma, member of the Special Service of Lungmen Guard Department, is awaiting your orders.

Stand by her side when you are scared. It really helps. 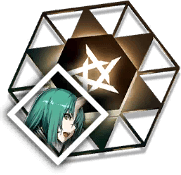 Hoshiguma's Token An old manga. It tells the story of an unknown monster becoming a hero with the help of his friends.
Potentials

护身符 Lv. 2
Increases DEF of all Defenders by 9% and increases self DEF by 4%
Info
Special Operation Strategy
60

护身符 Lv. 2
Increases DEF of all Defenders by 11%（+2%） and increases self DEF by 4%
Info
Special Operation Strategy
60

护身符 Lv. 3
Increases DEF of all Defenders by 11% and increases self DEF by 6%
Info
Special Operation Strategy
60

护身符 Lv. 2
Increases DEF of all Defenders by 9% and increases self DEF by 4%
Info
Special Operation Strategy
60

护身符 Lv. 2
Increases DEF of all Defenders by 11%（+2%） and increases self DEF by 4%
Unlock Information

护身符 Lv. 3
Increases DEF of all Defenders by 11% and increases self DEF by 6%
Info
Special Operation Strategy
60

护身符 Lv. 3
Increases DEF of all Defenders by 13%（+2%） and increases self DEF by 6%
Unlock Information

When this Operator is assigned to be the Trainer in the Training Room, Defender Operators' Specialization training speed +30%
Hannya Lvl: 1

When this Operator is assigned to be the Trainer in the Training Room, Defender Operators' Specialization training speed +60%

+ DPS Defender
+ Talent: Chance to resist Physical and Arts damage
+ E2 Talent: Buffs the DEF of all other Defenders
+ Great DPS and DEF option with S3 that doesn't have the penalties like other DPS Defenders
+ Very high HP makes her a nice meatball tank


- As long as Liskarm can survive, she usually provides more utility as a DPS Defender than Hoshi

“Anyone who wants to hurt my friends must answer to this shield.”

And answer they will. Armed with a triangular shield adorned with the motif of her Oni heritage, Hoshiguma is a powerful, offensively-oriented Defender who can reflect damage or deal AoE damage.

Hoshiguma’s kit embodies her ferocity, granting her the offensive capabilities to literally grind her enemies down. Hoshiguma's first Talent, Tactical Armor, grants her a chance to resist both physical and arts damage. Her first Skill, Warpath, provides a standard Defense and Attack buff. Her second skill, Thorns, is a passive Skill that grants her a slight Defense buff and deals a portion of her Attack in physical damage to all enemies that attack her. In particular, this Skill fills a niche when dealing with invisible ranged enemies at a distance, as these enemies cannot normally be attacked by other Operators without first being blocked, or by having a rare detection Skill/Talent. Hoshiguma’s third Skill, Saw of Strength, turns her into a literal grinder, allowing her to attack all enemies in front of her while simultaneously granting large buffs to her Attack and Defense. This Skill allows Hoshiguma to quickly deal with large groups of enemies, significantly decreasing the burden on your defensive line.

Hoshiguma is a very straightforward Defender Operator, but this is also her greatest weakness. She excels at being an effective tank that also deals good damage, but does not provide much unique support or utility outside of her second Talent, Special Operation, which grants a slight Defense buff to all other Defenders. Despite having a niche use for dealing with invisible ranged enemies, Hoshiguma does not fill many other irreplaceable roles.

Despite her honest Skill-set, Hoshiguma is an excellent choice for a standard Defender. Her fierce skills will protect the defensive line and open up the way to begin the counter-offensive.

Can take a punch AND deliver one. Hoshi has some great DPS potential for a defensive unit, especially with S3/E2. However, DPS isn't really needed from your Defenders, and there are lower rarity Operators that are cheaper to develop that are just as good for early-mid game needs.

Note: Talent 1 gives chance to resist True damage as well.
Hoshiguma does her job sufficiently at SL7, especially if you're a story-centric player. Mastery on her is rarely the deciding factor. Worse, she gets power crept in high-end content by Mudrock who has become the go to defensive defender (even despite being quite different). If you do master a skill, S3 is the one to go with as it greatly raises her peak performance. S2 is a fine skill that many people favor for its simplicity, however the gains on it are painfully low for what 6★ Mastery costs (it's significantly more sanity efficient to just give her more levels for the same stat gains) and it is rarely the choice in high end situations.

Pure defensive blockers don't have much value in the Roguelike, so extra investment for her isn't suggested for that mode.

Protector Defenders are one of the worst classes in IS2 due to their extremely low versatility and utility. They are almost never worth the Hope cost over lower rarity Operators that can already perform their role well enough.

E2 is optional, works well enough at E1 for the most part.

Hoshiguma is an elite Operator from the Special Ops Team of the L.G.D.
There are several charges against her on record.
After intervention from Chief Wei Yenwu, L.G.D. made an exception to admit her into its Special Ops division based on her exceptional abilities and field performance. She exhibited remarkable professionalism in handling violent crime, protecting VIPs, disaster response and emergency rescue.
Currently a defender assisting Rhodes Island operations, Hoshiguma provides tactical execution and command support.

Increase Trust to 50.
A towering female Oni.
Unlike Madam Ch'en, she dresses very casually but easily reminds others of her post with her speech and demeanor.
She loves to drink, but no one has seen her inebriated to date.

Increase Trust to 100.
As ranks go, Madam Ch'en is Hoshiguma's superior. But based on service history, Hoshiguma joined the L.G.D. before Ch'en and the two are long-time colleagues, so it's little wonder the line between them is almost invisible.
What is unexpected is that Hoshiguma knows more about Lungmen then Ch'en. She has extensive knowledge about its criminal underworld, law enforcement, politics, economics, education, and foreign policy among others, and is unafraid to hold strong opinions about those topics.
She is indeed a rare combination of martial and scholarly talent.

Increase Trust to 150.
Hoshiguma is no less aggressive than her kin in battle, usually the fiercest and most courageous on the field.
However, she also possesses a quality most Oni sorely lack - composure.
Her self-discipline is discernible in her speech and demeanor, as well as in battle. She has fully conquered the recklessness in her Oni blood.
This may have perhaps stemmed from her past.

Increase Trust to 200.
According to L.G.D. record, Hoshiguma was already an anomaly even when was part of the criminal underworld. She never preyed on the weak, was always righteous, loyal and helpful, and could drink anyone under the table... In short, a throwback to the martial heroes of the East's long-forgotten history.
It's likely that these qualities allowed her to break tradition and gain a position in the L.G.D.
But it's also clear from the files that Hoshiguma is no different now than when she first arrived at Lungmen, so the question remains how did she manage to gain her composure and knowledge, and why did she work for criminals in Lungmen?
Even if these stories took place before she arrived in Lungmen, she is still shrouded in mystery.

Upgrade to Elite LV2.
I am willing to lend this person, Hoshiguma, to you.
Since we want to get off on a right foot, let me give you a piece of advice, Doctor.
If you think that she's a reasonable person, that just proves that you do not fully understand her.
That shield... Well, until she tells you where that shield came from...
You don't know the real her.
—Wei Yenwu