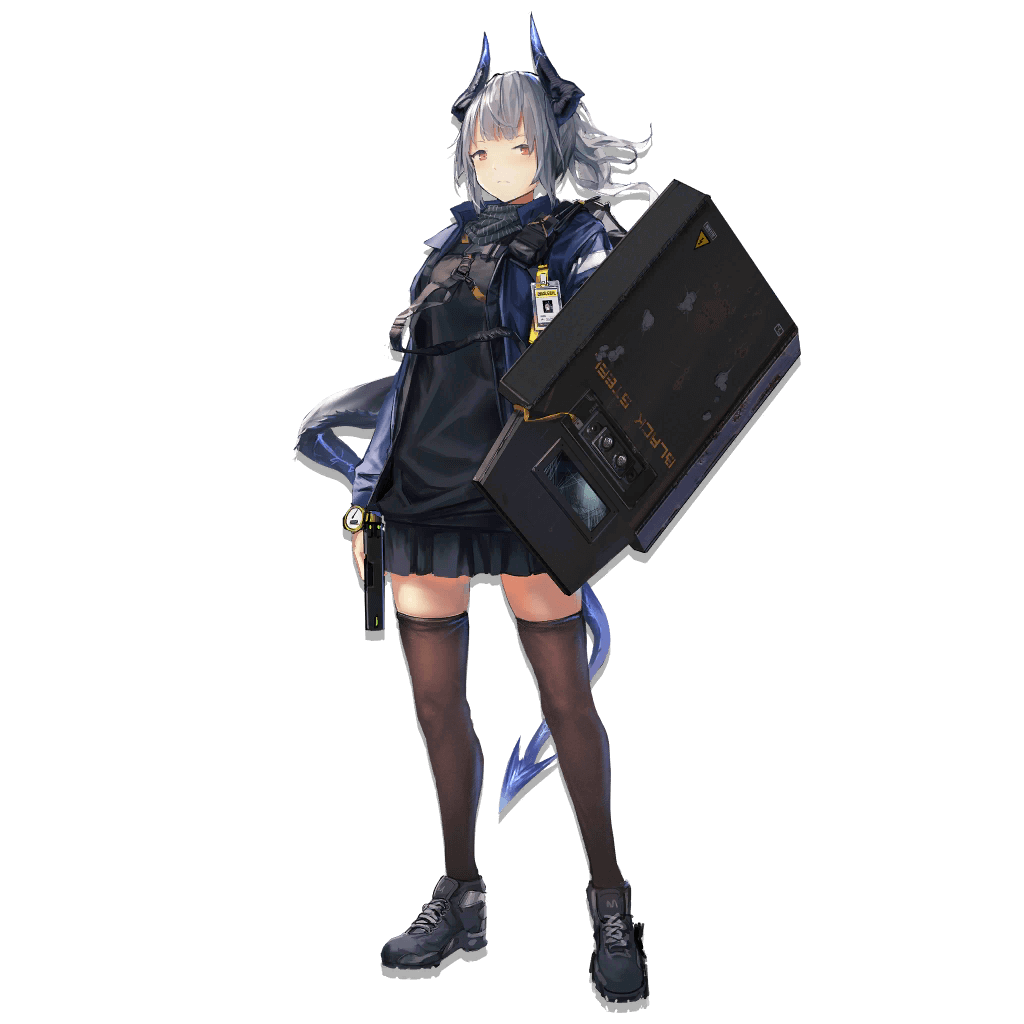 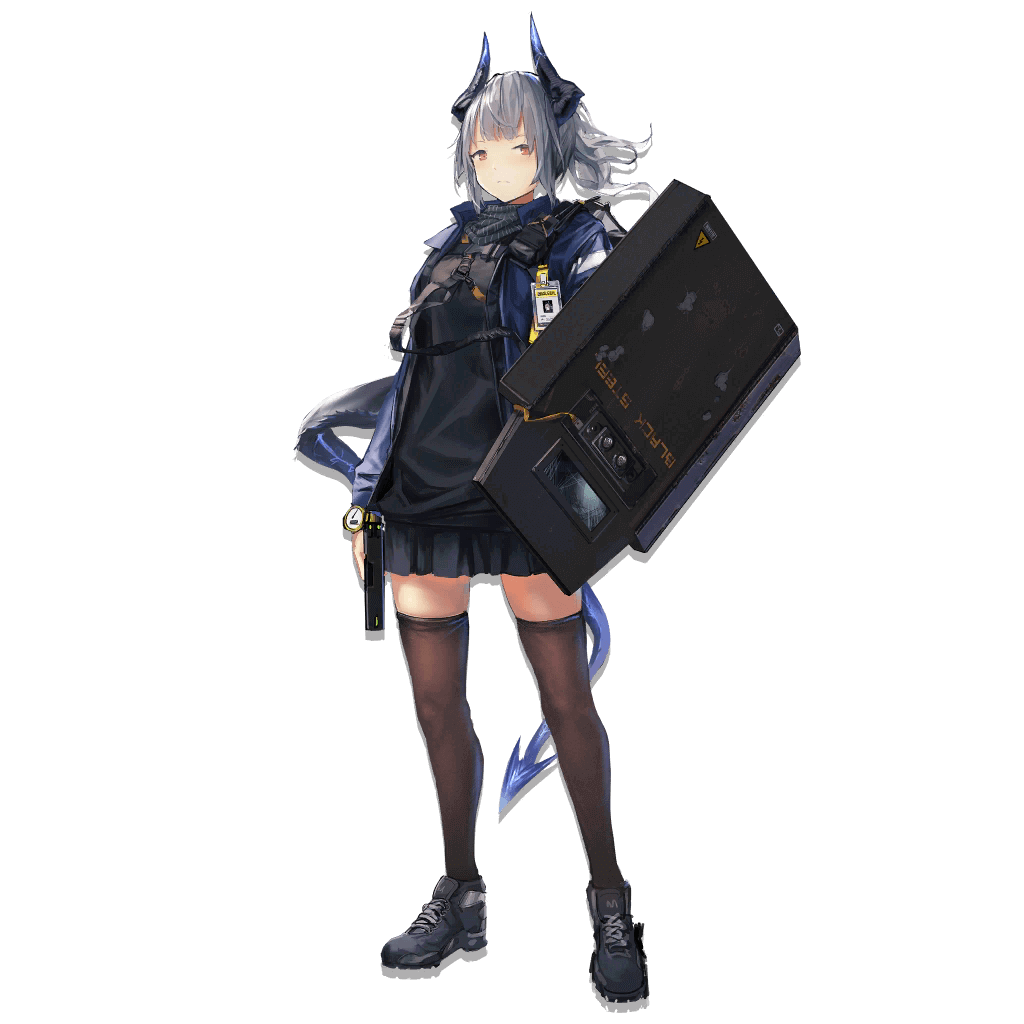 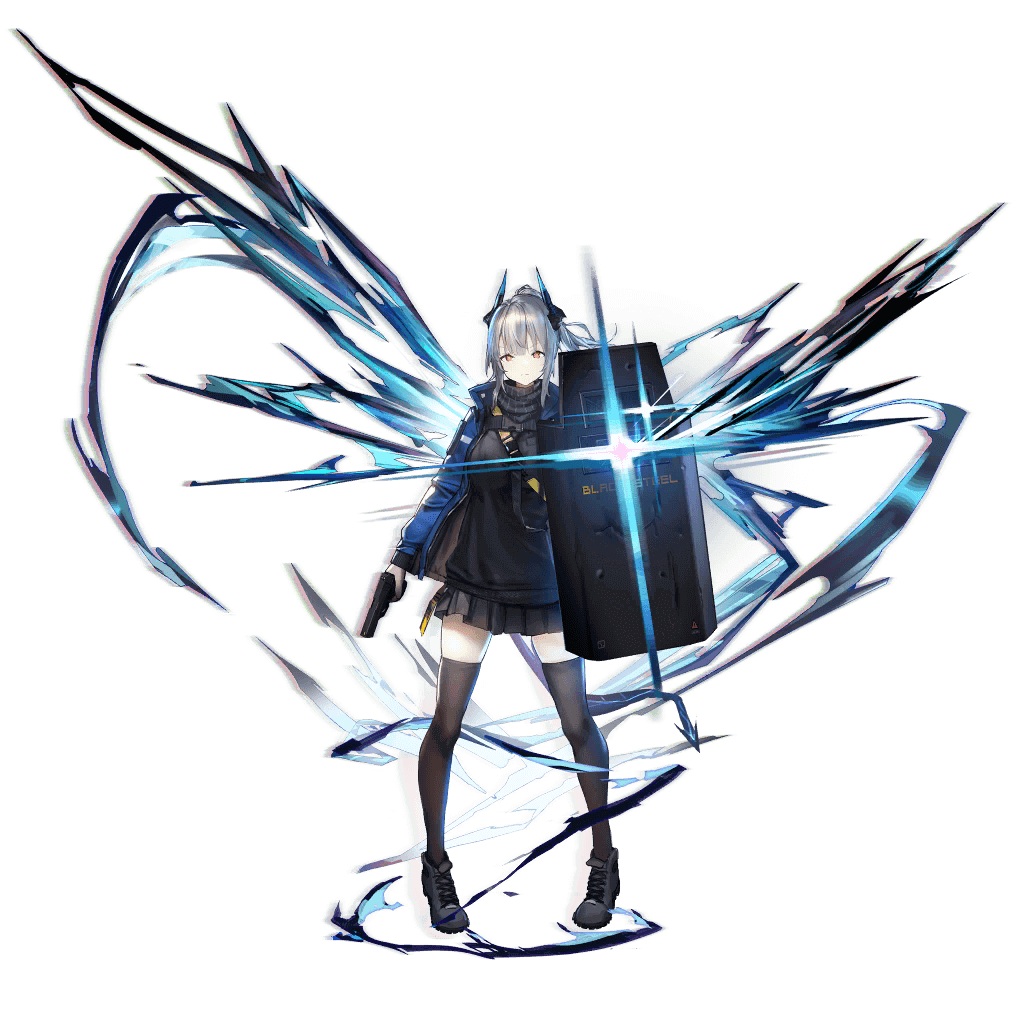 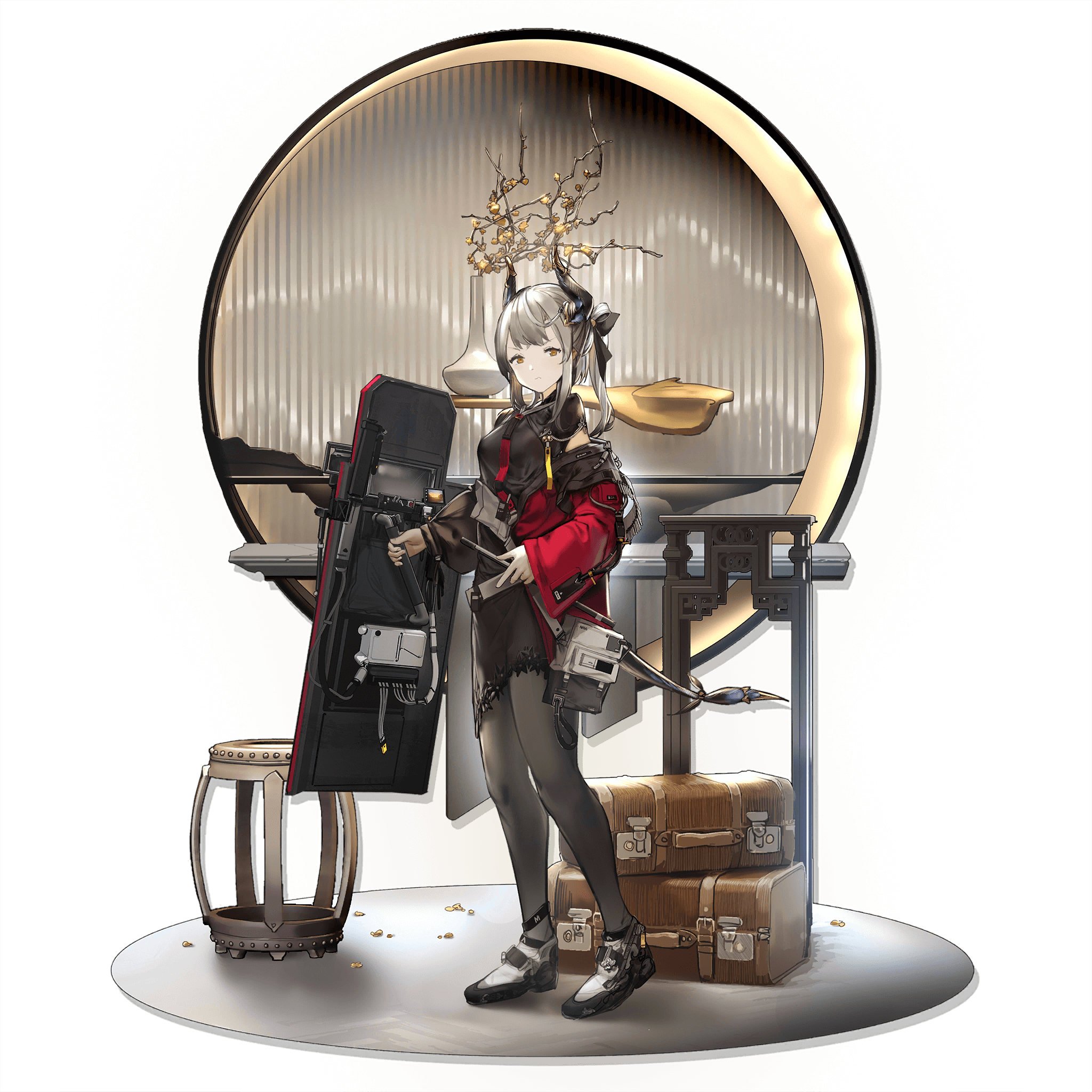 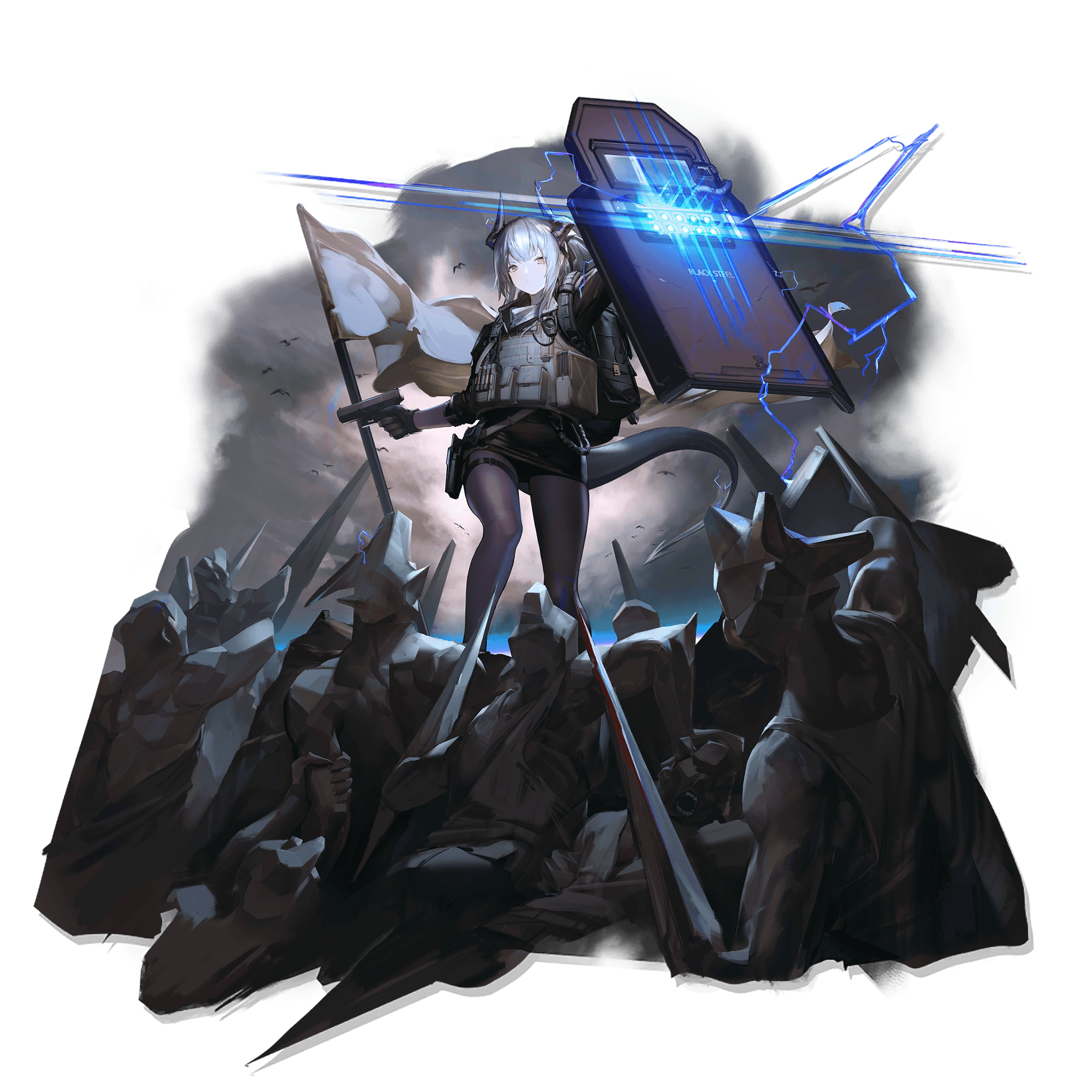 Liskarm, Defender Operator of B.P.R.S. of Blacksteel, possesses both a solid shield and a sharp spear.

Her spear-like lightning will pierce all enemies in front of her. 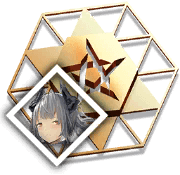 Restores 1 Skill Point to this Operator and a random ally in the surrounding tiles when attacked
Info
Talent Range
Thunder Resistance
Lvl: 1

When this Operator is assigned to a Power Plant, increases the drone recovery rate by +15%
Pulsed Arc β Lvl: 1

When this Operator is assigned to a Power Plant, increases the drone recovery rate by +20%

- S2: Self-stun can troll you
- S1: Automatic activation means it is not completely reliable
- Not as durable as the other 5 and 6* DEF Defenders

Often underestimated because of her race and small stature, this pragmatic yet determined Blacksteel security consultant has an electrifying stare that surges across the battlefield. Liskarm is a 5★ Defender specializing in DPS, ranged attacks, and SP generation.

Through the use of her pistol, Liskarm has extended range and can hit aerial enemies making her unique in the Defender lineup. Her Talent, Tactical Defense, is one engine in the SP-charge-and-skill-spam meme machine; it restores one skill point to her and a random adjacent operator when she gets attacked. At Elite 2 she gains an additional Talent, Thunder Resistance, which makes her one of the few Defense/DPS Defenders to have innate Arts Resistance.

Her first Skill, Charged Defense, significantly increases Liskarm’s defensive capabilities automatically. Her second Skill, Counter Arc, turns her into a multi-attack thunderstorm dealing Arts damage to multiple units with a small stun chance. Because of the offensive nature of the skill, Liskarm relies on the stun to help alleviate damage taken. This skill is especially useful against groups and heavily armored enemies. The price Liskarm pays for the power surge is exhaustion; she is stunned for 5 seconds after the skill duration. Since she cannot block while stunned, there is a danger that enemies will leak past her if it is used recklessly without proper back-up.  With careful positioning Liskarm can turn the tide of battle, while empowering her allies while blocking, stunning, and dealing massive damage to her enemies.

Liskarm is an offensive oriented Defender whose claim to fame is SP charging those around her when she gets hit. Most new players will be better served with defensive oriented blockers, and can look at developing her later if/when they are looking to increase their tactical options.

A 5★ Operator that gains an additional Talent at E2, Thunder Resistance makes her one of the few non healing-Defenders to have innate Arts Resistance, though the main reason to E2 her is the benefit she receives from the higher stats.


Liskarm is a slightly peculiar unit. She is a very valuable and very meta unit, yet a majority of that comes from her talent and not her skills. Even in Advanced high risk situations she is usually sufficient at SL7 with Masteries only adding some level of comfort or flexibility. In this regard, both of her skills are viable options depending on what is needed more: defense to take pressure off or supplemental DPS.

For purely Story players, neither is a necessary Mastery and, in fact, you may find the gains to be quite lackluster for the cost. Advanced players will want to favor S1 though, since the enemies she needs to take hits from in high risk CC scenarios are frequently the hardest hitting in the game. Roguelike players likely won't want to do either, as pure blocking Defenders have pretty low value there.

Tied with Greyy for the best Power Plant buff in the game.  She’s a decent eventual E2 candidate if she’s a part of your squad.

Liskarm is an employee of Blacksteel Worldwide, a private security contractor that provides security and protection services to international business, state agencies and non-governmental organizations. She has a lot of combat experience in conflict zones.
Liskarm is currently under contract to provide professional security and other consulting services to Rhodes Island.

[Blood Originium-Crystal Density] 0.10u/L
Operator Liskarm often fought in Originium-afflicted areas but has not yet been infected thanks to proper protective measures.

Increase Trust to 50.
'By the books', 'as pragmatic as one gets' are how all people who have worked with Liskarm tend to describe her.
It's always the same steady rhythm to her fighting: Attack, advance, ascertain the situation, communicate with teammates, review strategy, rinse and repeat.
As Franka's combat partner, Liskarm considers Franka's fighting style rather risky. She struggles to comprehend why Franka would look to combat to satisfy her thrill-seeking. But Liskarm stays true to her obligations as a partner and always reminds Franka of proper standard operating procedures, trying to nip any potential recklessness in the bud.
She can and will endure the inevitable tongue-lashing from Franka afterwards, knowing nothing is more important than their survival.

Increase Trust to 100.
Liskarm's Flash Shield is actually an enlarged Arts staff fixture, activated only by Liskarm's own unique abilities.
When activated, the shield emits over 54,000,000 lumen of intense light, plus a destructive electrical shock covering a conical area 5 meters in radius. It is terrifyingly devastating when released in small, confined spaces.
However, these Arts drain a lot of energy from Liskarm, exhausting her completely. Therefore, Blacksteel commanders often pair her with a melee specialist. Currently, Franka assumes that role.
Liskarm has repeatedly complained to her superiors in hopes of reining Franka in, since after every lightning strike, Franka would take advantage of a sapped, immobile Liskarm by pranking her.
Note: When she uses her electricity-based powers, her horns glow a luminescent turquoise.

Increase Trust to 150.
When her partner Franka was confirmed Infected, Liskarm immediately requested to be reassigned to Rhodes Island to be with her.
Liskarm felt Franka would want someone she knew for company. Not to mention she had gotten used to working with Franka in combat and believed Franka to feel the same.
However, Franka denied the allegation and even requested that Liskarm be sent back to Blacksteel. She couldn't wait to be rid of her babysitter, and was dismayed to see her (former) partner going through the reassignment motions at Human Resources the next day. That's just not cool.
According to witness accounts from many Operators, the two Blacksteel Operators had an altercation coming out of HR, both threatening to complain to the other's superiors.

Increase Trust to 200.
Liskarm hopes to form her own private security company in the future. Working for Blacksteel Worldwide is only a first step to that goal.
Because Liskarm is lacking in physical stature, and the fact that her race is not known for skill in combat or Originium Arts, no one ever expected much out of the small Vouivre girl from the sticks. She even bought into that view in the past.
But her steady-does-it and stubbornly patient personality always compelled her to devote more time and effort than her peers to fulfilling her goals. When she was an intern with Blacksteel, Liskarm tagged along on every sortie they would allow, starting at the bottom and working her way up to become a reliable, competent security specialist.
Liskarm's hometown is located in an area controlled by the Vouivre Alliance, a small city primarily relying on mining, quarrying and stone processing. To maintain the viability of these industries, the city often operated in the deserts and mountains near the mines and quarries--where nomadic robbers and their mercenary cohorts roamed.
To counter potential raids, the city formed a defense force, but inadequate training and poor equipment forced it to turn to more reputable security contractors.
The contractors who fiddled with newfangled weaponry and equipment, speaking to each other in foreign languages, repelling invaders in the blink of an eye were Liskarm's very first memory of the business.
She wasn't interested in money or the thrill of combat. She just wanted to use her weapons to bring peace, not chaos, to the people.

Stage Name: mem_liskam_1
Unlock: E2, Level 1
Description:
Liskarm employs a unique and powerful form of electrical Originium Arts. This, combined with her stable temperament and reliable defensive techniques, allows her to switch between offense and defense in the midst of combat.
When working with teammates who favor offense, Liskarm creates an effective attack environment, helping them play to their strengths.
When assuming an offensive role, Liskarm unleashes a devastating electric shock. Unfortunately, this power comes with a risk of physical exhaustion, so make sure to employ flexible tactics.