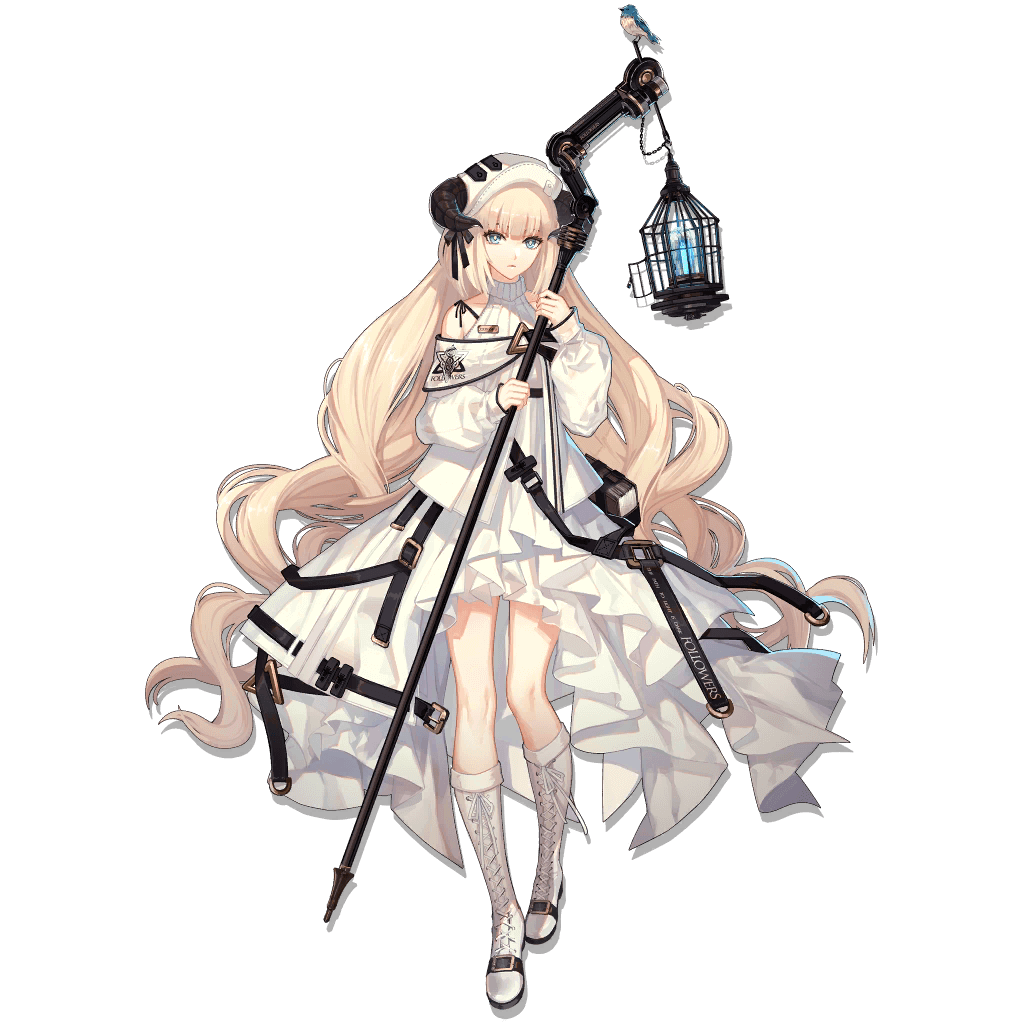 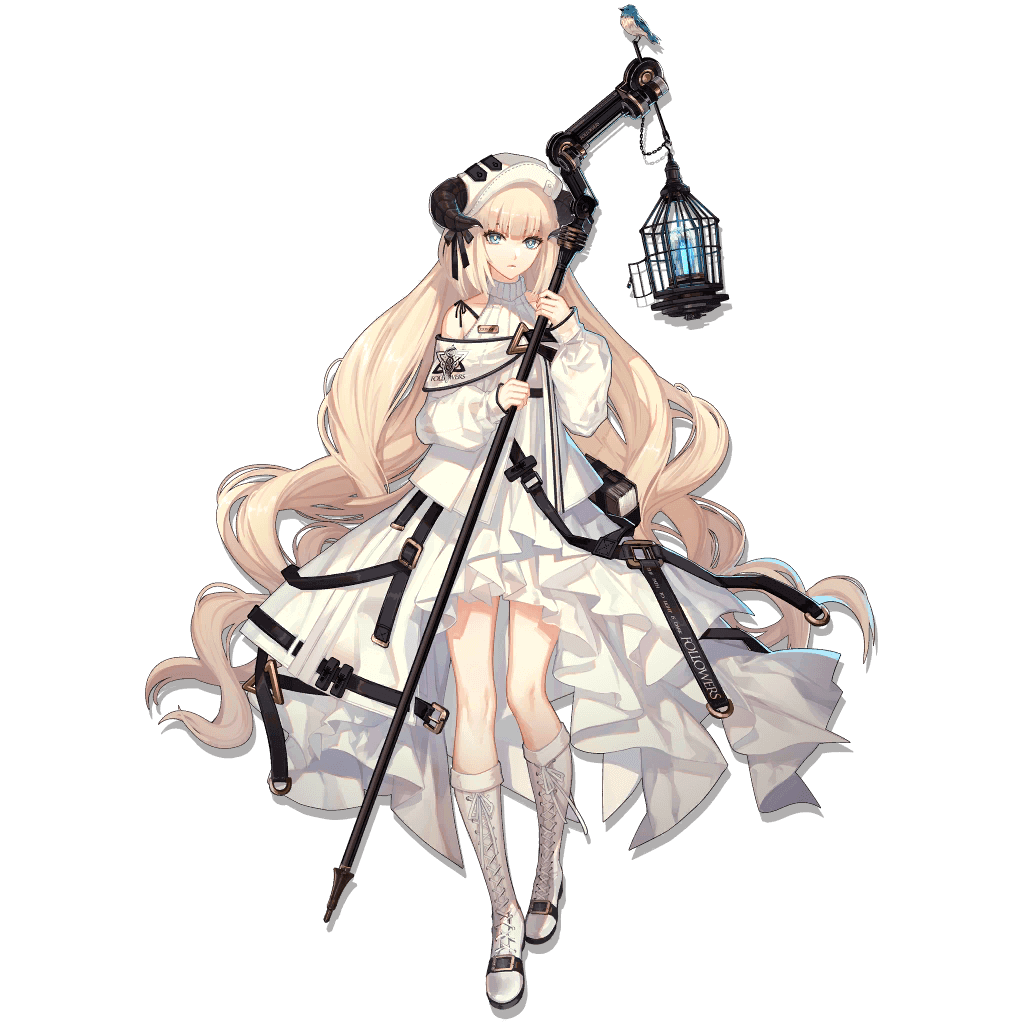 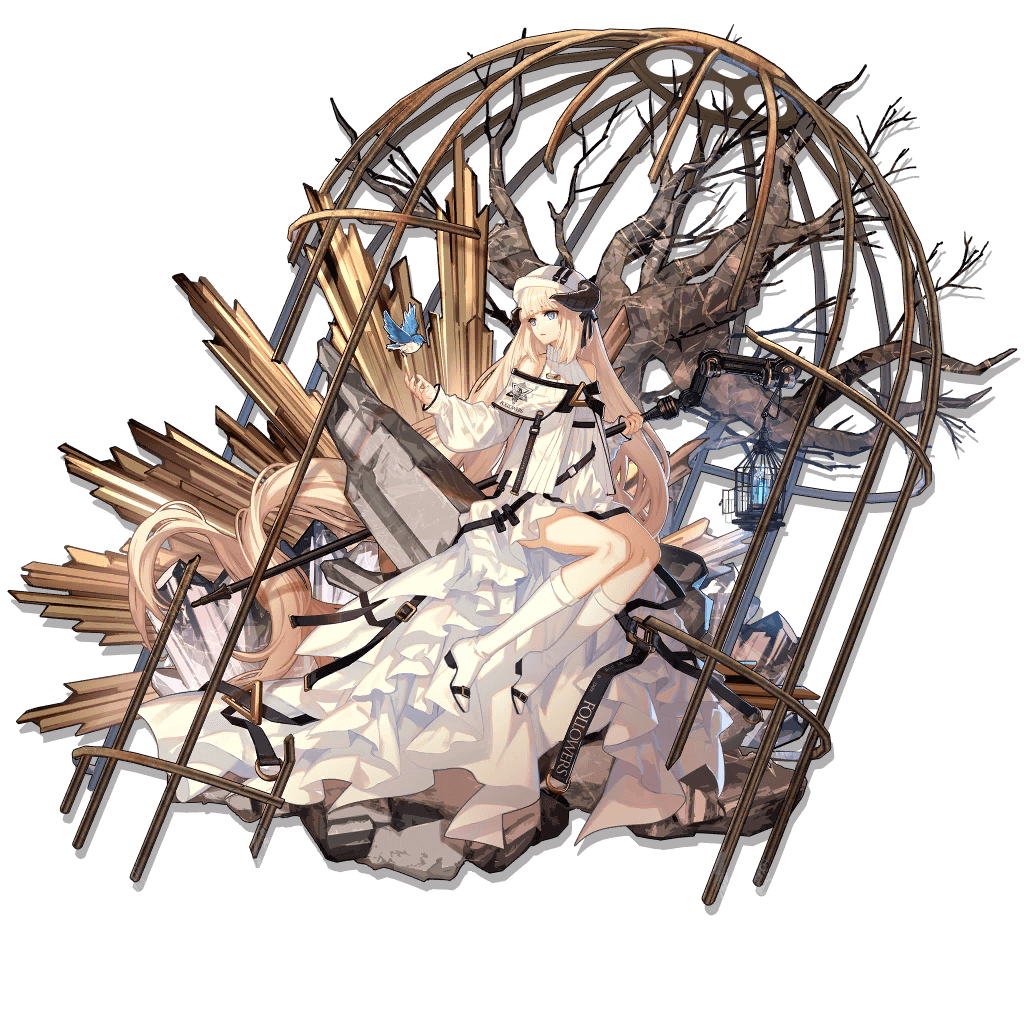 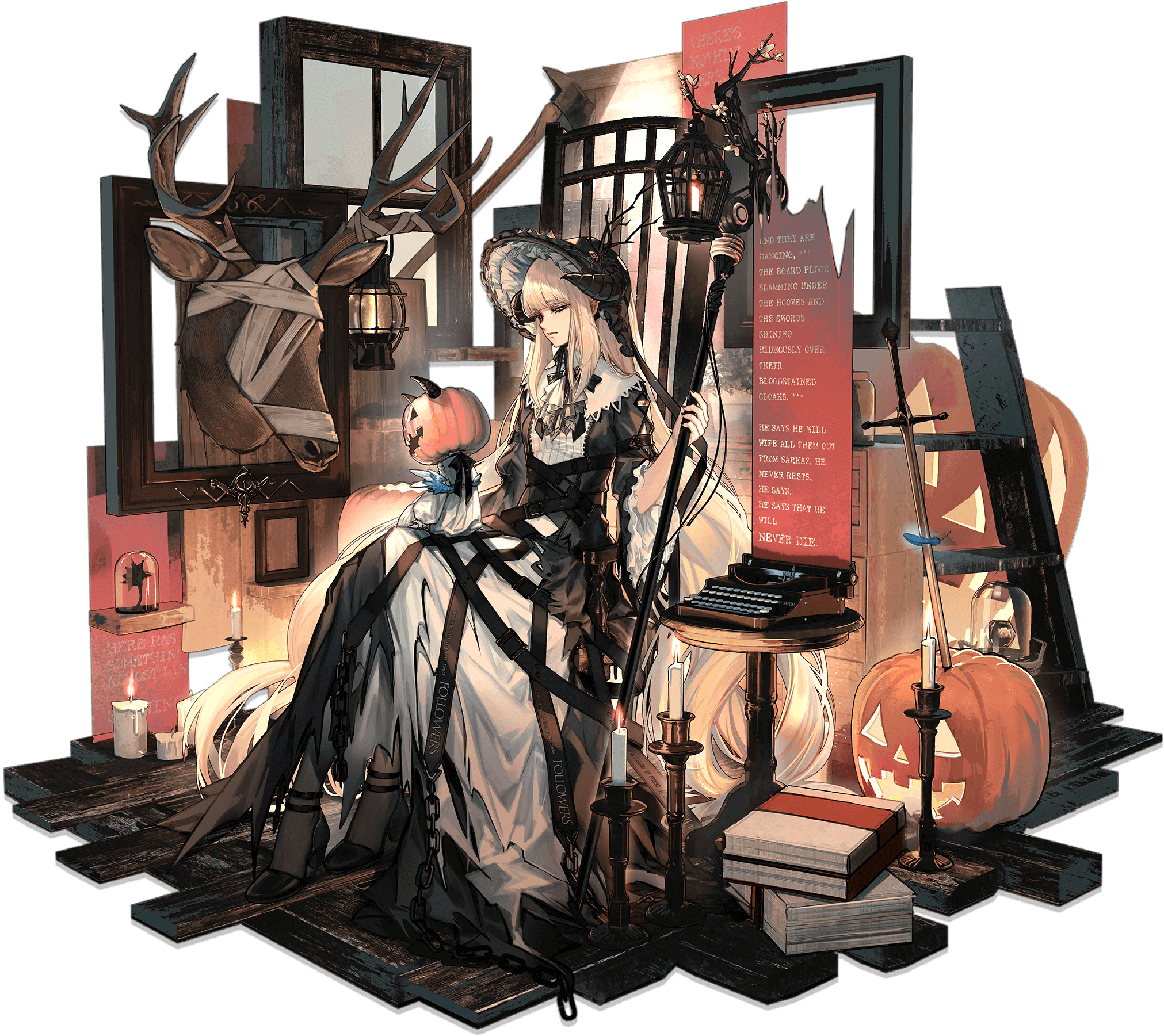 Restores the HP of 3 allies simultaneously

Nightingale, Sarkaz healer, will do everything she can to provide medical care for the squad.

As simple as a blank sheet. 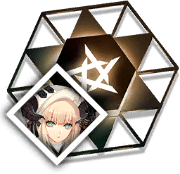 Nightingale's Token A box of messy puzzles. The real problem is many pieces are missing.
Potentials

Can summon Phantoms. Phantoms cannot attack or block enemies, but have 75 RES and 30% Physical Dodge and are more likely to be targeted by enemies. Phantoms lose 3% Max HP per second
* Detailed information on Phantoms can be seen here.
Info

When this Operator is assigned to a Dormitory, restores +0.1 Morale per hour to all Operators assigned to that Dormitory (Only the strongest effect of this type takes place)
Lady of the Lamp Lvl: 1

When this Operator is assigned to a Dormitory, restores +0.2 Morale per hour to all Operators assigned to that Dormitory (Only the strongest effect of this type takes place)

+ Trait: Heal up to 3 friendly units at once
+ Talent: Passively increases RES for allies within range
+ Talent: Can summon phantoms that can be placed on open tiles to draw enemy attacks. These ignore deploy limit
+ The best choice against Arts Damage and Caster enemies by a lot
+ Her S3 has a very large AOE
+ She will make some very difficult future stages much much easier

- If there is no Arts Damage, Ptilopsis (and sometimes Perfumer) can provide better utility

A prisoner of her own mind and a victim of a dark past, Nightingale is an expert on the functions of the human body and excels in healing through the Arts. She is a 6★ AoE Medic who can restore the HP of 3 allies simultaneously and specializes in protecting her teammates with Arts Resistance buffs and her Fleeting Phantoms.

Nightingale’s first Talent, White Fiend’s Protection, as well as her Arts Shield and Sanctuary Skills, all increase the RES of your Operators in different ways. This makes Nightingale’s skillset very adaptable, allowing her to choose between:

Her second Talent, Fleeting Phantom, enables some interesting strategic play, as it creates phantoms that she can place on the map to draw enemy fire. These phantoms cannot attack or block, but they have high RES and Arts Dodge, giving your team extra breathing room in tight situations.

Nightingale is primarily a preventative healer who may, in some situations, underperform compared to lower-rarity Medics, especially when there is no Arts damage involved. While AoE healers are important team members, other AoE healers are arguably less niche than Nightingale, especially given their significantly reduced investment requirements compared to the 6★. That being said, AoE Arts mitigation is extremely rare, and it absolutely trivializes any enemy that deals Arts damage. Since enemy Casters and their ilk tend to be extremely nasty, there are many situations where Nightingale's unique powers get a chance to sing.

Hard-counters Arts DPS enemies, but has no utility beyond that. A long-term investment.


Since the launch of the game, no one has seen their stock increase as much as Nightingale. She has gone from a luxury extra who played second fiddle to a lower rarity counterpart to a key component of many high risk situations. Her main value is in her RES buff on her S3, a role no one else in the game can do, however this still requires some nuance. For one, I do not believe purely story players will find a lot of value here. Certainly S3M3 adds a lot of comfort over SL7 but is ultimately not close to required for any story stage or risk 18 situation, and outside of specific stages it can seem quite underwhelming. Especially considering the cost of a 6★ M3, story players will find much more value elsewhere. Advanced players though will find much much more value here and likely it always will have value unless HG makes a major change to how they deal with enemy arts damage. Still, the limits of the mastery outside of those scenarios keeps the grade down just a bit relative to other skills in its class.

Increase Trust to 25.
Imaging test for this Operator showed blurry outline of internal organs with unusual dark spots. Unusually high concentration of Originium particles were present in her circulation, indicating signs of infection and confirming her as infected.

Nightingale's condition is more severe compared to the average Infected, and she has other problems as well. She showed obvious lapse of memory different from that of the Doctor, in that the cause seemed to be medication or possibly even a chemical serum that affected neural transmission. Combined with her endocrine and nervous system, plus traces throughout her body, we could confirm, after internal discussion with the medical staff, that Oripathy is not the sole culprit for Nightingale's condition.
It was good that Shining brought Nightingale here, no matter how you cut it. At least at Rhodes Island we can offer the poor girl a relatively free environment for her to deal with the problems.
Sadly, as one of the most skilled healers I know and someone who could easily discern symptoms and their sources, she ironically could not do the same for herself. How mockingly cruel is that?
—Y.P., Medic Operator

Increase Trust to 50.
Nightingale is exceptionally versed in healing through Originium Arts. Unlike most Medic Operators, she did not have a full grasp of the principles and practice of modern medicine, nor did she score well on written exams, but she knew the human body and functions like the back of her hand. Her medical applications of Originium were also profound and left the researchers and observers in awe.
Operator Nightingale also possessed unique Originium Arts: She can generate an invisible field around herself to mitigate, or even complete neutralize, powerful Originium energy attacks initiated by enemies. Operators not familiar with Originium Arts dubbed this field the 'Sanctuary.'
Dr. Kal'tsit suspects Nightingale's healing talent shares the same source as the other Originium Arts she displayed, though the conjecture has not been proven to date.

Increase Trust to 100.
Even at Rhodes Island, Nightingale remains a unique Operator.
When she first arrived on the island alongside Shining and Nearl, Shining expressed her wish for the island to offer Nightingale comprehensive physical exams and a treatment plan.
Memory loss, deficient mobility in limbs, ■■■■, ■■■■■■...
The Medic Operators all lamented at the test results. In addition to Oripathy, the other debilitating symptoms she suffered have exacerbated her condition and have far graver consequences.
Given the situation, Shining quietly answered all of Dr. Kal'tsit's questions--including the revelation of many classified projects.
Following that inquiry, Rhodes Island accepted Nightingale for medical treatment.

Increase Trust to 150.
When she got better, Nightingale requested going on assignments with Operators Shining and Nearl.
Dr. Kal'tsit and Operator Shining fought over the issue. Their debate changed Dr. Kal'tsit's mind. Despite vehement protests from the medical staff, the Doctor still agreed with Shining and approved Nightingale as an Operator to serve Rhodes Island.
Although Operator Nightingale is still facing many physical problems and is unable to protect herself in combat, she has surprised many with her ability to turn the tide of a battle. During the course of fighting alongside her, Operators have realized that she longs to prove her worth with her actions, and that converted their attitude for her from pity to admiration.
Nightingale's inscrutable disposition and cool personality let many Operators realize the cruel truth of the land, but also the importance of Rhodes Island.
Now, Miss Nightingale can be seen occasionally speaking with Operators other than Shining or Nearl in the hallway, sometimes even with a faint smile. The author, for one, finds joy in that.

Increase Trust to 200.
I find myself currently unable to understand Miss Nightingale.
Her emotions aren't just a blank sheet of paper or a tangled ball of twine. Her mood and thoughts are an impenetrable cell, sealing endless fragments of memory to trap her in herself. I can't even fathom whether she wanted this out of her own will. She probably no longer is able to distinguish herself from her imaginary persona, or reality from illusion.
We can go in only when Miss Nightingale chooses to come out.
It is near impossible and very sad.
Shining said Miss Nightingale is the sacrificial lamb of a war, a civil war... inside her own mind
She's trapped in a small space, stripped of her identity and robbed of her life...
It's happening in places I can't detect even now.
Dr. Kal'tsit didn't want me to get involved, but I felt obligated.
Shining rescued Miss Nightingale from there, but I think Nightingale never really left. She often feels confined, incarcerated, still a bird in a cage.
I believe I have a duty.
With Shining, Nearl, and the Doctor, I'll do everything I can, as I don't think of Miss Nightingale as merely a friend.

Upgrade to Elite LV2.
'A fleeting illusion is finesse, simple Originium Arts sufficient to distract the enemy in a battle.'
You're doing a great disservice with a description like this in a report.
I don't know what Nightingale's been through, but as soon I saw the giant bird cage appeared out of the blue, I sensed it.
It wasn't a bird cage but a cell. I felt the same indescribable loneliness, or better yet, fear coming over me like the enemy did.
Nightingale saved my life, but I cannot thank her. I just don't have the guts.
I just think you should... you should...
stop letting her go on like this, I beg you!

Stage Name: mem_cgbird_1
Unlock: E2, Level 1
Description:
On the battlefield, Miss Nightingale is not only an outstanding doctor, but also able to offer strong protection against the enemy's Originium Arts attacks to surrounding Operators, and can at necessary junctures create phantoms to draw fire.
Have the Operators fight by Miss Nightingale's side. Do not panic; there is no need to fear. Trust in her, and once you do, once more, try to step just a bit closer.