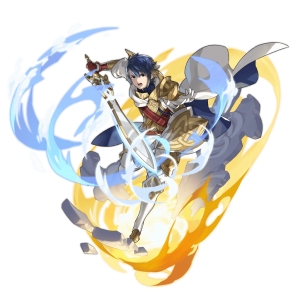 The Prince of Askr joins the roster as part of the Fire Emblem: Lost Heroes event. Dragalia’s first free 5★ is a self-contained powerhouse whose two damaging skills double as utility. Built-in Skill Haste and an excellent weapon class allow Alfonse to excel even without team support. With the addition of Paralysis to his kit, the young prince becomes the first Light adventurer to receive a Mana Spiral and uses it to tower above his peers.

Last Burst now has a permanent STR buff to pair with a buffed Blue Radiance's 20% STR boost. On top of innate Skill Haste, Paralysis, and spell vamp, Alfonse's kit is rock solid. With Curse immunity tying everything together, entry into High Zodiark just became even easier.

Swords’ lack of reach and mobility make it excessively easy to get caught by High Zodiark's dashes.

Daikokuten is the prime DPS pick, although High Zodiark tends to dash more often than one would like.

Cupid is a safe pick for his handy active skill.

Pair 1: Caps Skill Damage while also playing towards STR and Paralysis. Slot 1 may be replaced with Resounding Rendition in low-Shapeshift content.