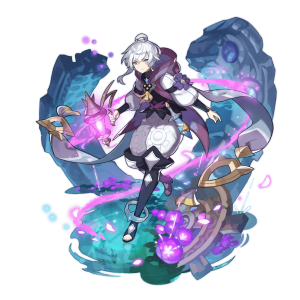 Delphi is Dragalia’s first 5★ Shadow Dagger user, and an oddity at that. Despite the unattractive 60% STR handicap and titanic competition, Delphi makes his case with enemy DEF reduction and damage-over-time Skills. As the first non-Wind adventurer to inflict Poison, Delphi doesn’t compete for Bleed stacks, instead enhancing his Bleed allies with a Crit Rate Co-ability. These factors make Delphi ideal for Mercurial Gauntlet and High Jupiter, as both bosses are immobile for extended periods of time.

Delphi’s Poison ticks are on par with Ieyasu’s Bleed and similarly isn’t resisted by most Light bosses. His debuff zone amplifies his entire team’s damage to make up for his personal Strength reduction.

Delphi’s Skills continue to charge when running from High Jupiter’s attacks and even during Shapeshifts, turning a handicap into a boon.

Had Delphi 60% more STR, he would be the undisputed king of Shadow DPS.

Rigid Skill timings place higher priority on positioning, as Delphi will have to fall back on his weapon’s Skill to avoid damage.

Fatalis / Marishiten are chosen over Shinobi as the majority of Delphi’s Poison damage comes from his enhanced Force Strike, placing higher priority on raw STR than Skill Damage.

Juggernaut is an accessible and powerful budget option.

Pair 1: Delphi's general purpose setup, making full use of his Poison. SS may be replaced with Mega Friends or other Force Strike picks.