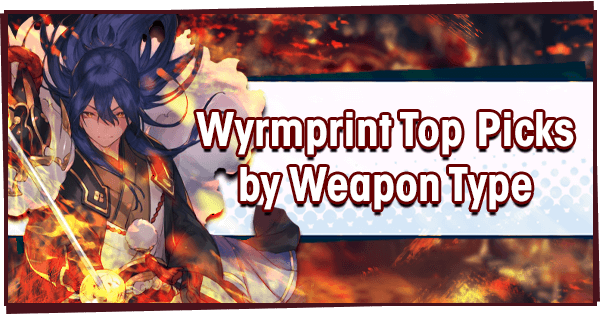 Version 2.0.0 completely overhauled Wyrmprints as we know them, enabling more dynamic customization around individual kits. Although each Wyrmprint only carries a single effect, players can now equip up to 5 Wyrmprints at once. Furthermore, these Wyrmprints are divided between three 5★ slots and two 4★ slots with the possibility for set bonuses through Affinities.

For all elements except Water, the Double Punisher (EX. Stormlashed Punisher + Poisoned Punisher) meta encompasses the majority of the endgame meta due to increased flexibility with endgame team comps.

With the release of Dominion quests and an extra pair of wyrmprint slots on weapons, two skill damage prints can compensate for the affliction punisher occupying 5★ slot.

The general formula for achieving maximum damage is as follows:

Factors like content and adventurer kit can vary widely, so the fifth slot is flexible on a case-by-case basis. For example, Gala Luca prefers more Crit Damage, while Gala Alex wants a Strength Doublebuff pick if supported by Patia or Grace.

Note: Several different Wyrmprints now share the same effects, but feel free to use whichever is most easily unbound. All categories are sorted by descending rarity. More on this under Example Loadouts.

For reference, the Ability limits are as follows:

Welcome to the Opera!
Skill Damage

One with the Shadows

The final flex slot can vary widely by adventurer kit, so here are top picks by niche:

The Lurker in the Woods

A Suit of Midnight

Once in a Lifetime

With the general damage picks in mind, we can dive deeper and think about rarity. Since affliction punishers dictate the meta, different elements will have either a 5★ or 4★ slot automatically reserved. Lets run through two example loadouts:

Assuming that combo counts are kept up, the remaining 4★ slots can be delegated to Crit.

Not worth building around for DPS, but supports appreciate some extra icing on the cake. With more flexible slots, supports/healers can afford to cherry pick Wyrmprints for some marginal benefits.

Exceptions include covering for missing resistances:

For example, Xainfried may opt to run Indelible Summer + Unfulfilled Visions to shrug off all Flame-related afflictions.