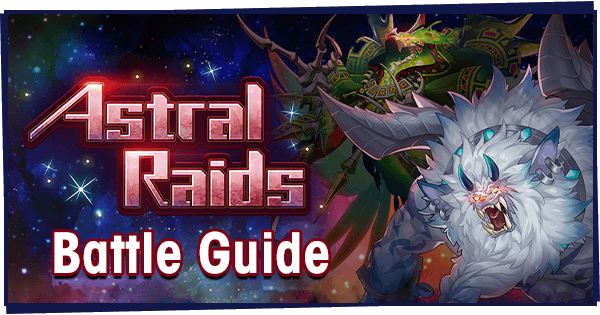 Astral Raids are a rotating carousel of past Raid Bosses that fill the downtime between new/revival Raids. Rewards include Astral Shards which are exchanged at the Treasure Trade for the latest in upgrade materials: Augment items.

To challenge Astral Raids, players obtain Astral Pieces from clearing any Campaign or Event quest (excluding Mercurial Gauntlet) to a maximum of 300, with any overflow being lost. Additionally, these pieces cannot be obtained while Astral Raids are active, namely during weekdays or while actual Raid events active.

Unlike standard Raid events, Astral Raid timers have 10 minutes on the clock, so all teams are recommended to bring at least one healer.

Because its effects are applied to all four teams, Dragon Prep of some form should be run on as many participants as possible. Lead adventurers should equip The Bridal Dragon, while King’s Countenance, Dragon’s Nest, and Dragon Arcanum work well on subs. If all 16 adventurers commit to this strategy, players can begin Raids with almost two full Transformation charges. Using this focused burst against specific body parts is crucial to lowering bosses’ offensive capabilities and increasing survival rates.

Astral Hypnos is similar to his original form in that Purple attack markers are frustratingly frequent. In response to the constant barrage of wide-reaching attacks, players are advised to lead with Blade or Lance adventurers for the mobility provided by their Force Strikes.

Although his Stance cyclings are often interrupted early on, his Crit kit ensures that his neutral game is still strong. Crucially, Blade Force Strikes quickly close the distance between Hypnos and his wide AOE attacks.

Ramona’s Skill 1 is highly valued for its ability to focus down specific body parts. Her sister Rena provides support by stacking their Primed Abilities together for increased damage and survivability. Manually controlling Rena allows the player to properly double-cast Rena’s Skill 1 as well as utilize Blade mobility to get the team clear of Purple markers.

Astral Raids are by no means a DPS check, so healing is a necessity to outlast the extended timer. Verica’s targeted heal is ideal for bailing out lagging teammates struck by stray Purple markers. Although Valentine’s Hildegarde can also fill this role, her Skill 2’s Shield is not sufficient to protect against the hail of Purple marker attacks.

Hypnos begins the fight by raising his right hand and creating three small tornados which travel around the map. These tornadoes last for the rest of the fight and will knock down adventurers on impact, dealing minor damage.

Hypnos instantly teleports to the edge of the arena, and charges. There are two Purple action markers (a rectangular one in front of him, and a circular one in the middle of the arena). When fully charged, Hypnos leaps forward and slashes, then returns to his original starting point. Destroying the Left Wing downgrades this attack into Red markers.

Upon reaching Overdrive, Hypnos will rise into the air, begin charging a Purple attack marker, and summon eight Wind Mana Founts. These founts must be quickly destroyed by your team, as the more are left alive, the stronger the attack that follows.

The best way to do this is to have each team member KO two founts. A good way to coordinate this is to spread out when the attack begins: Look for founts without any teammates near them. Should time run short, don't be afraid to use Skills in order to clear them.

When his health drops to critical levels, Hypnos summons four minions which all have a Red marker attack. None are particularly threatening, but they can make it tough to stay in one spot and deal damage.

Until the Right Hand is demolished, players must respect Whirlwind’s massive radius and be ready to get clear at any time. As such, players should damage Hypnos from the side closest to the map’s center whenever possible so as to avoid being boxed in by Whirlwind.

Use tornadoes to avoid Whirlwind

If using a low-mobility adventurer or having locked oneself into a Skill animation, getting outside of Whirlwind’s radius is a tall order. If left with no other option, players can use nearby tornadoes to knock themselves down, utilizing “true iframes” while their adventurer lies on the ground and gets back up.

Much like his EX Raid incarnation, Astral Valfarre is wholly unforgiving to the shortcomings of AI-controlled teammates. Although most of his moveset is still fairly telegraphed, the most notable difference is Phantasmal Wolves, which will now shred through adventurers that dare to attempt DPS during this time. A hyper-defensive composition consisting of at least one healer along with an Axe and/or Lance user is highly recommended.

Lowen / Wedding Xania - Bringing one or both is highly recommended. Regarding Dragons, Phoenix can be used as a stand-in for Freyja and provides much-needed relief to all allies.

Claw Crash (Purple):  Valfarre spawns a map-wide lattice of Purple action markers. After slashing once, a second lattice will appear that covers the previous lattice’s openings. Destroying either hand will greatly reduce Claw Crash’s coverage. Note, being hit by the first lattice will not result in double jeopardy as get-up iframes will prevent the second lattice from connecting.

Tidal Tornado (Red): After winding up, Valfarre charges forward to deal damage. This attack has a large radius, but a long startup time.

Savage Press (Purple): Valfarre shifts his stance and spawns a mickey mouse-shaped Purple marker on the ground before leaping to that location. Breaking either hand will remove the corresponding Purple marker.

Phantasmal Wolves (Purple): Valfarre spawns several rings around him in concentric circles, each dealing damage and inflicting Bog. Moving in front of the boss helps with visibility.

Target either the Left or Right Hands

Commit to one of the hands and focus it down ASAP. This will create much larger openings during Claw Crash while also removing one of Savage Press’s markers.

In addition to bringing 1-2 healers and a defensive Co-Ability, the most important tip to remember is that there’s plenty of time on the clock. By all means, DPS can be sacrificed in favor of avoiding damage. This is most pronounced during Phantasmal Wolves, which will quickly eviscerate teams that don’t retreat to the outermost edge of the map. Of course, Transformations can help tank the Wolf damage, but are better saved for less hectic portions of the fight.

A good rule of thumb is to assume that the AI has no sense of self-preservation. Maribelle in particular will die immediately to the opening Fog Breath due to her 100% Skill Prep locking her in place. It falls to the player to choose the biggest liability and keep them out of harm’s way.

A revival of Dragalia’s very first Raid Event, veterans return with a vengeance eager to unleash their fleshed out Water teams. Phraeganoth himself hasn’t aged a day since October 2018 as he’s still a heavy-hitting, highly telegraphed juggernaut.

A quick-charging, large radius, circular marker that lowers the DEF of anyone caught inside.

Phraeganoth sequentially spits three fireballs from his mouth, aiming one to the left, one in front of him, and one to his right.

Phraeganoth unleashes a fiery jet sweeping from his right to left.

A Yellow marker attack that causes several lava bombs to crash down. Afterward, the area where they land becomes dangerous, inflicting a Burn to anyone who walks on it.

Phraeganoth gathers energy for a moment, then performs a quick dash forward.

Several Magma Spots spawn around the map, each slowly charging a powerful circular Purple marker. Destroying a Spot opens up a safe area to stand in when the other spots blow. Skills that Freeze will delay these timers and allow you to stack more damage on them before they erupt.

Someone cut that stupid tail off already...

Targeting Phraeganoth’s tail will remove the unavoidable nuisance that is Tail Swing.

Save Iframes for Yellow Marker attacks

Despite being highly telegraphed, their power and wide coverage warrant sacrificing DPS in order to keep teammates alive. Tail Swing’s DEF reduction will further increase damage taken, and Flamethrower in particular has no marker but deals lethal damage to anyone in front of Phraeganoth.

Save a Demolish / Break to interrupt Volcanic Ruin

Despite their slow charge time, the Magma Spots have considerable HP and will require focus firing from the entire lobby just to neutralize one. Furthermore, AI teammates are prone to leaving the safe pocket and dying instantly to the other Magma Spots. If possible, prepare a body part to Demolish for when the Volcanic Ruin text first appears to bypass this move entirely.

Volcanoes can be Frozen

Players will notice that Freezing a Magma Spot will also pause the Purple marker’s expansion. Once a Spot is desynced from the others, players may spam rolls to hug the single lagging Magma Spot, then break away once the first set of Spots detonate.