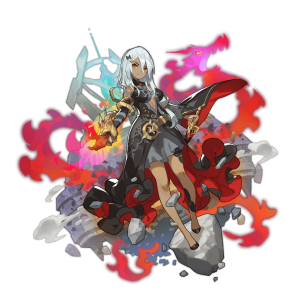 Bellina premieres as the star of Scars of the Syndicate: Part 1. Like fellow daredevils Natalie and Valentine’s Addis, Bellina is right at home with her health bar blinking red. A pioneer of the Dragondrive gauge, Bellina cannot shapeshift, but gains a unique skill charging system. Upon filling, this gauge becomes ammunition for Renegade Descent, enabling multiple Skill 1 casts in succession.

But aside from the obvious dangers that follow playing at low HP, Bellina’s main weakness is her lack of a dedicated home. No Paralysis immunity/Poison kit and a stacked Shadow roster mean that slots on both High Jupiter and Kai Yan teams are tough sells.

Bellina doesn’t need to tank damage to drop into her comfort zone. Even if healed to just above optimal range, Renegade Gambit can safely return her to a functional HP level.

High Jupiter’s Trial is off limits. Several instances of unavoidable damage only serve to exacerbate Bellina’s lack of Paralysis immunity.

Bellina must hide behind a 75% DEF boost while her dragondrive is active. Otherwise, a single hit in endgame content is often lethal. Furthermore, receiving well-intentioned heals will actually lower her DPS due to her inverted HP threshold.

Fatalis has no downsides since Bellina cannot Shapeshift and incur the Curse.

Marishiten is a reliable bump to raw STR, actually beating out Shinobi in damage.

Juggernaut is an accessible budget option that still gets the job done.

Pair 1: As most Wyrmprints feature HP conditionals, Bellina's options are rather limited. Luckily, HttH synergizes perfectly with Dagger users. Other options could be Resilient Offense picks such as Dear Diary or The Synthetic Dragon.