Berserker embodies his Living Fortress skill, being nigh-indestructible between self-applied regen, debuffs, and Last Offense. He lives to facetank and has no need to waste time dodging, which equates to constant attacks and pressure on the enemy. He’ll do well in Imperial Onslaught, but low damage carries the risk of timing out. 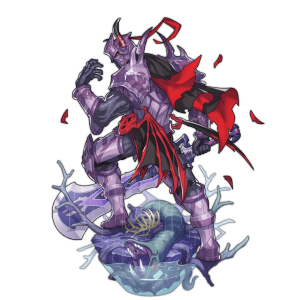 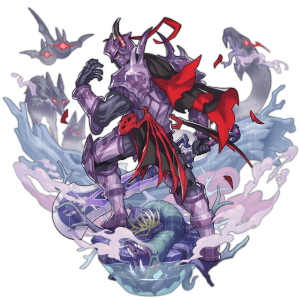 Berserker, the Frenzied Warrior, is a dark 4★ sword user with Blind Resist, and a kit focused around long-term survival. His first Ability, Calamity Wheel, is a full circle slash that debuffs enemy strength, but it’s his second Skill, Living Fortress, that defines him. This ability gives Berserker a stacking HP buff, which turns into HP regen once the cap is reached. This makes Berserker nearly unkillable with healer support and affords him easy survivability on the front lines. He also has the Striker’s Skill and Last Offense +30% Abilities, which means as the fight goes on or he dips low in health, he gains even greater strength.

Berserker does fine on his own, his increasing health and regen allowing him to shrug off incidental damage, and he provides his own buffs with Striker’s Strength and Last Offence to give him good long-term damage potential.

Berserker deals well with waves of enemies, shrugs off Blind, and is even good in the hands of the AI or in full auto mode. This makes him idea for IO and Light event challenges where Blind is the affliction.

It takes a long time for Berzerker to reach his health cap or Striker’s Skill cap, meaning that by the time he’s fully powered up, the battle is typically already over.

While Berserker is an expert at providing buffs for himself, he brings nothing but his Co-Ability to the table for his team.

Martishen: The premier Shadow DPS Dragon, Martishen will give a 40-60% Strength Boost and has high stats to boot.

Juggernaut: The budget choice for dark adventurers, and superior to 5★ dragons who are not MUB when he is MUB.

Phantom: The best F2P dragon for Shadow, he’s what you take when you lack gatcha options.

Blood Price: This is the budget dark sword, but it’s outshone once you can craft 5★ tier 2 weapons.

Skill damage boosts are the way to go for Berserker. The Shining Overlord is the top pick for Sword adventurers, with a good skill damage boost and Dragon Claws. Other top choices include Resounding Rendition and Tough Love. F2P options are Hitting the Books and Plunder Pals. For secondary prints, Levin’s Champion, Stellar Show, and Jewel’s of the Sun. are the premier options. Astounding Trick is a good F2P pick.

Good 4★ prints include Fresh Perspective, Together We Stand, and The Warrioresses.