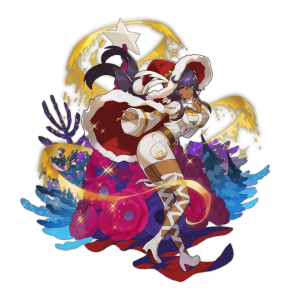 Dragonyule Malora charms her way into the flagship spot for the second iteration of Dragonyule Defenders. As far as Light Axe wielders go, Malora stands undisputed for her raw, unadulterated damage. Defense reduction is a versatile and deadly debuff that meshes well with Malora’s kit and with teammates overall. Armed with Curse immunity, Malora has no trouble breaking into the HZD meta and serves as a powerful pick for all difficulties.

Defense reduction isn’t subject to the same boss resistances as other afflictions and will always be proc’d reliably. In addition to boosting the team’s overall DPS, Chill of Winter’s damage is multiplied substantially. As a kicker, Starfall Surprise also grants a %HP shield.

Malora will be in HZD baiting range alongside Fleur, which may pose issues due to Axes’ lack of mobility. Maneuvering about HZD’s charges will also be harder than with other weapon classes.

Cupid remains the prime Light pick for his raw STR and utility.

Lindworm is a functional budget pick that grants 45% STR when fully unbound.