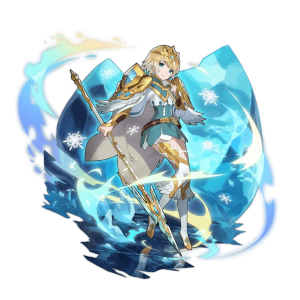 Hailing from the Kingdom of Nifl, Fjorm Princess of Ice comes to us as a Water Lance user. With 100% Skill Prep, Fjorm joins the Freeze Cheese club thanks to an upgraded Frigid Smash inflicting both Freeze and Frostbite. However, Ice Mirror is the real distinguisher here, rooting Fjorm in place and reflecting back damage with a vengeance. If timed correctly around predictable damage, this can carve away huge chunks of HP against bosses such as High Brunhilda, and with Ice Mirror gaining spell vamp, Fjorm's risk factor drops significantly.

Ice Mirror now has a spell vamp element, recovering almost a third of Fjorm's HP when capped. Although it won't cover 1-shots, Fjorm won't be as big a burden on her party's healer. Last Bravery has also gained an extra charge, adding another piece of accident forgiveness.

Fjorm's kit requires her to get dangerously low for maximum effect. A miscalculation on the player's part can end in death instead of a huge Ice Mirror or Last Bravery trigger.

Between Xainfried, Elisanne, and now Gauld, the Water Lance slot is highly contested, especially since Elisanne is free. Furthermore, there is no shortage of Frostbite inflictors atop the Water roster.

Siren is the strongest choice to enhance both of Fjorm's attack skills.

Leviathan/DY!Jeanne: These are good secondaries for DPS, with Leviathan more coveted for his Bog.

Vodyanoy: A budget 4★ option with a good strength boost.