Being the Curse-resistant mirror to Fritz, Fleur has a practical kit that builds off of the Paralysis supplied by other Light Adventurers. She is also the first non-5★ character to feature the Skill Shift mechanic. 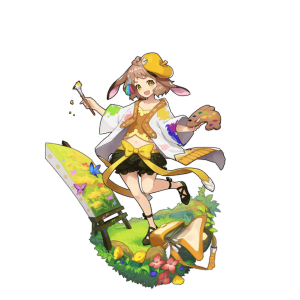 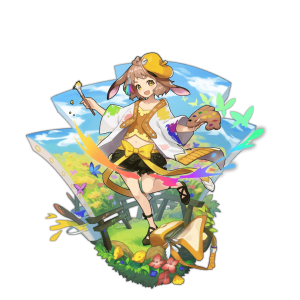 Fleur is a Curse-immune Light Dagger user and the featured 4★ of the Hunt for Harmony. Similar to her predecessor, Fritz, the Budding Artist moves away from Daggers’ traditional Crit emphasis and focuses on attack Skills and afflictions. Paralysis is a powerful affliction that most Shadow enemies are susceptible to, and Fleur capitalizes with frequent applications and Paralysis Punisher. Crucially, Fleur’s arrival adds a fourth Curse-immune weapon class to round out eventual High Zodiark teams.

Palette Punch is the first Skill in Dragalia to fully charge another Skill on cast, enabling quick-fire double-casts of Captivating Canvas. Built-in Skill Haste contributes to the rapid cycling and all but ensures that Skill Shift will reach Phase III successfully.

The ideal resistance for a Skill-oriented adventurer. Fleur also populates the fourth slot of Zodiark teams, which were previously composed of only Lance, Staff, and Wand users.

Gated by HP and Paralysis

Paralysis Punisher and Skill Haste comprise a large part of Fleur’s kit. Failure to Paralyze enemies or remain healthy will cause Fleur’s damage to stagnate since her basic attacks lack the staying power of traditional Crit Dagger users.

A melee adventurer with a low HP pool is especially vulnerable. Fleur must rely on her Skill i-frames and mobility to stay effective.