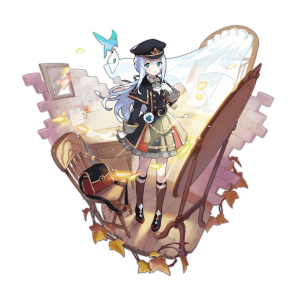 Formal Noelle offers more robust team support than her Wand form through considerable buffs and debuffs. A quick glance at her kit reveals striking similarities to Lowen’s: a Strength buff, max HP boosts, and Dispel. However, Noelle does bring a solid game changer to the table: Poison Res reduction. This debuff serves as excellent offensive support and prevents Poisoned Punisher loadouts from falling off during longer fights like Master Ciella’s Wrath.

Master difficulty Ciella doesn’t transform and reset her Poison Res, so multiple Poison users will quickly build up her immunity. Noelle’s Skill 2 counteracts this resistance stacking and indirectly increases her allies’ damage by 25%+ by extending The Plaguebringer’s effectiveness.

Similar to Lowen, Noelle makes her team progressively tankier as fights stretch on. This allows squisher teammates extra breathing room to survive attacks that would have otherwise one-shot them.

Despite a damaging Skill 2 and innate Poisoned Punisher, Noelle won’t be topping any DPS charts. As such, these aspects of her kit are essentially worthless since Staff users aren’t typically built to deal damage.

Freyja offers the most support by far, pairing Skill Haste with an extra teamwide heal.

Ariel is a suitable Skill Haste alternative that adds some punch to Skill 2.

This set forgoes strong picks like A Dog's Day in favor of Bow's Boon. The above picks max out both Recovery Potency and Skill Haste.