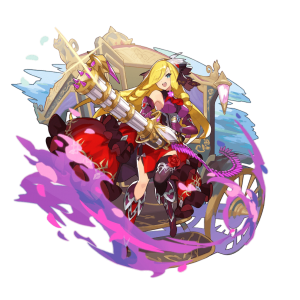 Following a brief teaser in the campaign, Gala Chelle debuts as the Shadow roster’s first Manacaster. Much like her brother Leonidas, Chelle achieves peace through superior firepower, burning through Overdrive phases with relative ease. Also like Leonidas, Chelle packs both a new* affliction and a scaling Skill 2. Protected by dual immunity and a plethora of survivability perks, Chelle remains a prime candidate for Legend Kai Yan by greatly reducing Berserk uptime with frequent breaks.

Rapid-fire Manacasters are already proven to make short work of Overdrive bars, and Chelle’s Ability 3 leans even further into this role. An additional 75% Force Strike bonus is nothing to scoff at, especially during Berserk Legend Kai Yan.

In keeping with Gala tradition, Chelle completely resists any afflictions Light content can throw at her, solidifying her Kai Yan viability.

15,000+ SP is no small fee, and Chelle requires at least five Skill 2 casts before she can self-enable the buff zone aspects of her kit.

CyGames has learned from the Karina fiasco and has capped Chelle’s Skill 1 scaling to 15 buffs, thus insulating her from Doublebuff insanity.

Akin to Leonidas’s Shapeshift into Mars, Chelle’s dragon form is predetermined, preventing her from using other dragons’ active skills

Andromeda is comparable to Fatalis if players can maintain her HP threshold.

Welcome to the Opera!

TPB may be replaced with Chariot Drift if the team is lacking Poison.

Star of the Dance I

Star of the Dance II